Global auto sales declined for a fifth consecutive month with a -7.6% m/m (sa) slowdown in September (chart 1). The deceleration is roughly on par with August’s -7.8% m/m (sa) pullback. On an annualised basis, sales sat at a very weak 57 mn units in September after trending closer to 72 mn vehicles for most of the first half of the year. On a year-over-year basis, the decline was -22% (nsa). Sales retrenchments were near-universal around the world as the semiconductor chip shortage has impacted production across all regions (chart 2). Asia Pacific auto sales led the dip with a -11% m/m (sa) contraction on the back of very weak Japanese auto purchases (-25% m/m, sa) as the region is the latest to be impacted by the chip shortage that saw Japanese auto production plunge by -17% m/m (sa) in August (latest available). The pace of the decline in North American auto sales let up modestly (-5% m/m, sa versus -11% m/m, sa in August) as American purchases slowed by -6% m/m (sa) against modestly positive turns in Canada and Mexico. European auto sales were largely flat as Germany posted a 4% m/m (sa) improvement against the UK’s sharp -16% m/m deterioration. Latin America experienced a -5% m/m (sa) contraction with only Peru posting an improvement in September auto sales.

See Box 1 in the Annex for a more detailed view of global auto sales in September. Also see a more fulsome discussion of the semiconductor chip shortage here.

Global auto sales posted its worst month this September since the pandemic first pummeled purchases in the spring of 2020. This time, however, it is not lack of demand, rather a shortage of vehicles. Dealer lots around the world remain sparse. The US inventory-to-sales ratio deteriorated modestly again in September, with inventory declining by -12% m/m (sa) (chart 3). Vehicles on American lots dipped below an unprecedented one million, which clearly limits sales. This is near-universal across markets; for example, Chinese inventory also remains in record-tight territory through September with minimal signs of improvement in its Vehicle Inventory Alert Index.

Auto production has yet to pivot. Production data is lagged in most countries but a quick tour de table of several key markets suggests global auto production likely continued to decline in September. North American auto production was down by -10% m/m (sa)—and a whopping -42% m/m in Canada—in September according to Wards Automotive Group. Japanese auto production pulled back by -17% m/m (sa) in August. European markets are too lagged to provide much insight, but are no doubt in decline. A modest improvement in Chinese auto production (2% m/m, sa) in September offers only false hope for the global recovery given its greater control over chip supply.

RECOVERY AROUND THE CORNER?

Wards Automotive Group still pencils in a fourth-quarter recovery of 8% q/q (sa). This follows the near-8% q/q (sa) decline in the third quarter (end of September) (chart 5). But its outlook is likely optimistic as it tracks automakers’ production plans which continue to be revised down on a weekly basis. AutoForecast Solutions, which puts judgement on stated plans, puts a much larger number on lost production: it now forecasts 3.3 mn fewer vehicles in North America and 10.9 mn fewer globally this year (chart 6).

A reasonable placeholder is that auto production will stabilize—albeit at low levels—in the final months of this year. The much-awaited rebound bump is likely pushed out to the new year and would unfold gradually over several quarters. The gap between chip production capacity (operating at near-capacity) versus auto production in the US (well-below) is still stark, suggesting limits to how quickly supply can catch up (chart 7).

Limited inventory in the new vehicle segment is impacting used vehicles. Given the prolonged nature of the new-vehicle inventory recovery, used car markets are similarly likely to remain supply-constrained through 2022 and into 2023. Black Book reports that used vehicle inventory in the US was down by -17% since the beginning of the year, while retail prices were up by 29% as of late October. Both retail and wholesale prices have been trending stronger over the Fall, according the same source, and this is showing up in still-escalating retention indices in the US and Canada (chart 9). On a month-over-month basis, however, used vehicle price appreciation has largely stabilized in the US (chart 10)—likely as consumers are sidelined by elevated prices and limited inventory—but with new vehicle prices still mounting, we are unlikely to see much softening in the near term until inventory improves materially.

Price pressures for new and used vehicles are likely to persist over the coming quarters given the slower recovery in vehicle production and limited inventory. New-model roll-outs in 2022 could be another upside risk to the extent automakers pass along increased manufacturing costs through pricing (not just through incentive channels). This is consistent with recent forecast revisions by Scotiabank Economics last week with inflation forecasts revised higher over the horizon in Canada and the US, in part owing to more persistent supply constraints and bottlenecks. Nevertheless, auto prices should largely stabilize on a month-over-month basis, softening towards the end of 2022.

There are a variety of other (potentially) emerging headwinds to the cost of vehicle ownership. Central banks have recently turned more hawkish in guidance on the overnight rate path with hikes starting in mid- and late-2022 in Canada and the US, respectively. Markets are already pricing in this tightening along with inflation risk. The effect on the cost of vehicles is so far relatively muted with still-low financing in both markets (chart 11), but should add to pressures over the medium term given rate outlooks. New model roll-outs in 2022 could see a higher pass-through of manufacturing costs to consumers, but higher model selection should offset this given the higher-end production bias throughout 2021. In addition, gasoline prices are now well-past pre-pandemic levels and continue to rise.

FINISHING ON A MORE POSITIVE NOTE

The magnitude of pent-up demand suggests that the auto sales cycle will extend through 2023 even as the economic cycle matures in most major markets. Last month’s report here discusses pent-up demand in further detail, but it is likely in the order of 2 mn vehicles in North America alone that could be pushed out to 2022 and 2023 into an environment of already-solid consumer demand. On top of the usual economic drivers (e.g., continued job recoveries, unwinding of savings as confidence strengthens, and higher vaccination levels), renewing depleted fleet stocks and replacing aging vehicle stocks should underpin demand over the medium term.

Global auto sales pulled back again in September by -7.6% m/m (sa) for a fifth consecutive month of decline. On an annualised basis, sales sat just shy of an anemic 57 mn units in September after trending closer to 72 mn vehicles over the first half of the year. On a year-over-year basis, the decline was -22% (nsa). Not surprisingly, the global semiconductor chip shortage continues to weigh on the global auto sales recovery. The outbreaks of the Delta variant around the world continue to impact supply chains. The recovery in auto production has consequently been pushed out yet again as manufacturers announce further curtailments on a rolling basis into the near future.

The descent in North American auto sales let up only modestly in September (-5% m/m, sa versus -11% m/m, sa in August). US sales declined by -6.4% m/m, sa at a very weak annualised sales rate of 12.2 mn vehicles. Very low inventories are curbing otherwise relatively strong demand-side factors as discussed here.) Wards Automotive is predicting a turn-around in October sales for the US, but with inventory less than one million vehicles heading into October and further production curtailments over the course of October, it seems it would be a feat to carry off an improvement. There is wide variability in monthly sales figures for Canada with automakers no longer reporting on a monthly basis—Wards Automotive reported a 1% m/m improvement in sales versus DesRosiers Automotive Consultants Inc. reporting a -4.3% m/m (sa) decline in September—but the trend-decline is evident. Preliminary data suggests October sales will post another decline.

Western European auto sales stabilized in September but masked differences across countries. The 4% m/m (sa) improvement in German auto sales likely speaks more to the double-digit declines in the two prior months as sales were still down by -26% y/y. France and Spain also experienced similar bounce-backs (2% m/m and 12% m/m, respectively), while UK auto sales pulled back by a notable -16% m/m (sa), compounding August’s -11% m/m (sa) deterioration.

Latin American auto sales declined for a third consecutive month in September (-5% m/m, sa), albeit at a slower pace than August (-10% m/m, sa). Brazil led the regional slowdown on a volume basis with -7% m/m, offset by a 3% m/m (sa) improvement in Mexico vehicle sales. Chile and Colombia also experienced further slowdowns in September (-6% m/m and -4% m/m, respectively) with only Peru pulling off its second consecutive month of increasing sales (4% m/m). 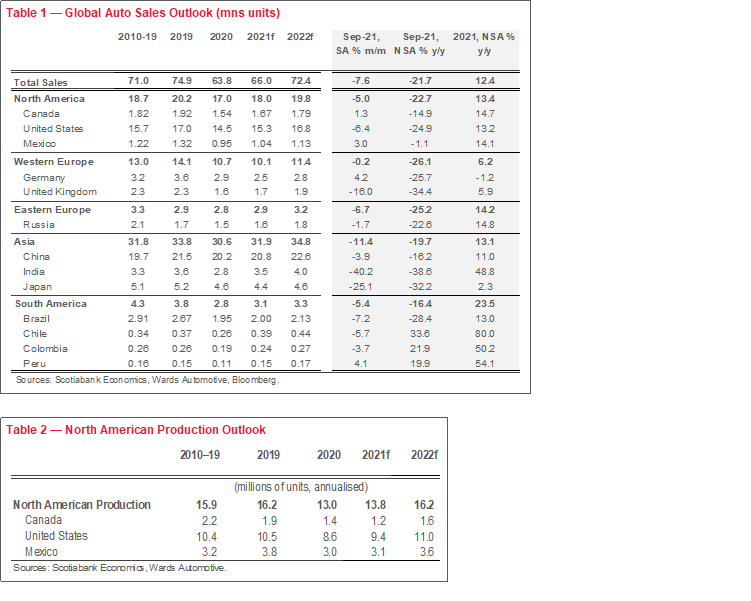