Transitioning at work: 'I walked into 100% acceptance'

For Erik McKoy, it is paramount that he be open and transparent about being transgender.

The 30-year-old feels it is important to be a positive example for others — the kind of role model he wished he had for himself.

“I grew up in complete fear, of whether I would be identifying as gay or identifying as transgender," said McKoy, a facilitator at Scotiabank's contact centre in Ottawa. "My goal is to make sure that people can see that I'm happy and that things are going well. And, I won't hide that I'm transgender. I won't hide it because of how much of an impact it would have made for me, knowing somebody was happy and transgender when I was a kid."

June marks Pride Month, when events are held globally to celebrate the LGBT+ community. It’s a month-long celebration of the community’s hard-won right to be themselves, as well as a recognition of the battle to obtain that freedom and the progress that still needs to be made.

Typically, Canadians would be able to celebrate by lining the streets to march in or cheer on those in Pride parades in cities across the country. The pandemic has forced the festivities to move online this year. 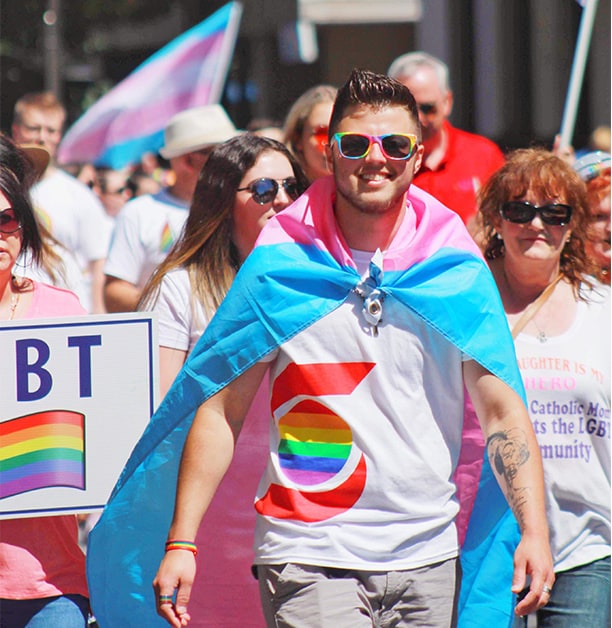 Erik McKoy, a facilitator at Scotiabank's contact centre in Ottawa, said if he had not made the transition he "would never reach my full potential, never be free and worst of all, never be me.” Ansel-Charles photography.

COVID-19 social-distancing requirements had already forced him to cancel a celebration among friends of a key milestone: March 15 marked two years since McKoy started taking testosterone as part of his transition.

While McKoy is forthcoming now, it took some time for him to reach that stage. He grew up in Châteauguay, Que., just outside of Montreal, the issue of trans people and gender transition was rarely discussed.

"The moment I had a feeling of, 'Am I in the wrong body?,' I immediately shut it down," McKoy said.

This instinct to bury those thoughts was further reinforced by horror stories shared by transgender people he met or learned about. He often heard about how transgender people had to leave their existing life behind in order to be their true selves — something McKoy was reluctant to do.

At a certain point, however, he could no longer ignore his feelings.

“This was something that I needed to do,” McKoy said. “If I hadn’t done this, I would’ve spent my life being held back, chained to an unbreakable cage that constantly told me I would never reach my full potential, never be free and worst of all, never be me.”

In November 2017, while he was working at Scotiabank’s contact centre in Cornwall, Ont., he approached his site head Lily Macream to talk about his transition. McKoy was petrified, and rather than addressing it directly he said it in passing as part of another conversation.

But she caught his words.

“She kind of looked at me and said, ‘Wait, did you just say what I think you said? That’s amazing,’” McKoy recalled.

McCream was incredibly supportive, communicating to the rest of the team about McKoy’s transition in a manner and at a pace that he felt comfortable with. He was given the opportunity to speak to his co-workers directly. But the team also held meetings with human resources and employee relations separately in order to learn more about the inclusion of gender identity and gender expression. McKoy was also involved in crafting the emails to inform his co-workers at other sites.

“It was really the way I wanted to do it,” he said. “It was absolutely freeing. Probably one of the best feelings I ever had.”

Tamara Hansen, a Scotiabank delivery manager specialist in Toronto, had a similar experience.

She remembers vividly the day she walked into the Bank’s downtown office as herself, finally.

Like McKoy, the long-time Scotiabanker had struggled for years with anxiety about her gender at a time and place where people were far less comfortable with the discussion.

Gender was not at the forefront of her mind for many years.

“You bottle things up long enough, pretty soon it comes to a head and that really happened for me in 2014.”

That was the year Hansen started hormone replacement therapy, quietly. She was in her 50s at the time she started the process, which can be more difficult and less effective for older people in transition.

“Because of my age, there was a high probability that I would have to stop this and not go forward with it,” Hansen said. “I made a decision to go as far as I could with the HRT before I let anybody know. And that meant I was keeping this a secret for a few years.”

In 2015, Hansen had indeed developed complications, and needed to take time off work. When her colleagues asked questions, not being able to answer them weighed on her, she said. Tamara Hansen, a Scotiabank delivery manager specialist in Toronto says that the Bank became her “safe place" and that she felt a camaraderie and love at work from the time she told her colleagues about her transition until she retired late last year.


As the years passed, Hansen could feel the desire to tell others building, but she would stop herself, fearing that she was not ready.

A trip to IKEA inadvertently solidified her resolve to come out publicly, she said.

It was Pride month, and the furniture store was peppered with signs expressing its support for the LGBT+ community.

“I was in tears before I left the store,” Hansen said. “And I knew coming out of that, that’s it. It’s happening right now.”

She then told six of her Scotiabank co-workers.

“I just wanted to test the waters and see what kind of reaction I was going to get,” Hansen said. “And it was all positive.”

And as Hansen took a week off to get ready – getting her hair and nails done, introducing herself to her neighbours to prepare mentally – Scotiabank prepared her co-workers for her return. This process included holding multiple small group training sessions for the entire division of more than 200 people on the Friday before her return.

“By Monday, I walked into total 100% acceptance. It was incredible,” Hansen said. “And I haven’t looked back since.”

Jody Jacobson, Scotiabank’s Director of Diversity & Inclusion, said the Bank is committed to fostering an inclusive environment for employees, potential employees and customers who are members of LGBT+ communities.

“We believe that diverse opinions, backgrounds and perspectives make us stronger and more adaptable for the long term — so we seek to advance inclusion of sexual orientation, gender identity or gender expression for people who identify as lesbian, gay, bisexual, two-spirit, trans or allies. We prioritize LGBT+ inclusion and encourage everyone to be their authentic selves.”

Scotiabank went over and above to facilitate and accommodate her needs, she said. While she knew that the Bank’s policies around LGBT+ employees would have protected her, it’s the reaction from individuals that would make or break the process, she said. The extensive education and proactive outreach to her co-workers made it a success.

“You're petrified going into this. You don't know what you're getting into. The company cannot put that burden on the individual. This is huge. They have to embrace it. You need to provide education for the people whom the transgender person is interacting with. There's no question in my mind, that's the big thing. You can't make the trans person do the work, because it's an uphill battle already.”

For McKoy, the overall response he got from his colleagues was positive, but there were some awkward moments at the beginning. That’s to be expected, he said. McKoy believes it is important to be open and allow those around someone who is in transition the ability to make mistakes as well.

“They saw me as a specific person that I never really was. So, I'm asking them to change that perspective, to be open about it,” he said. “I need to give them that same courtesy, and that same respect. I need to be open to the fact that they are learning, they are transitioning with me. They're not going to get the pronouns right every time.”

For Hansen, the Bank became her “safe place.” She felt a camaraderie and love at work from the time she told her colleagues about her transition until she retired late last year.

“If I had a bad morning or bad commute coming in, I was looking forward to arriving at the office,” she said. “That was a haven.”

Hansen had been looking forward to this year’s Pride parade. She is eager to participate online, but she is also hopeful that a celebration in real life may be possible later this year, when it is safe to do so.

Looking back at her participation in the Toronto parade last year, it resonated with her how the Pride celebrations drew in people from all walks of life, not just the LGBT+ community itself.

“I love Pride because it allows for exposure, to be out there, and that's what's necessary,” Hansen said. “We are people, just as much as anybody else.”

Read more about Diversity and Inclusion at Scotiabank here.