On Remembrance Day, we honour the the courage and sacrifice of the more than 2.3 million Canadians who served in the major wars of the first half of the 20th century, on overseas peacekeeping operations, in Afghanistan, and at home during times of natural disasters, 118,000 of whom lost their lives fighting for freedom around the world.

Beginning in 1919, a year after the Armistice to end the First World War was signed, Canadians joined Britain in observing Armistice Day on the second Monday each November to celebrate the allied victory in Europe. In 1931, Canada decreed Remembrance Day would be held on Nov. 11, with a focus on Canadians who served in the war, many of whom paid the ultimate sacrifice.

More than 600 Bank of Nova Scotia employees signed up to serve, with 175 of them never to come home. Sydney Frost, who served with the Royal Newfoundland Regiment and received the Military Cross in 1918 for bravery and leadership in the battle at Keiberg Ridge near Ypres, went on to become President and Chief Executive of the Bank. He is responsible for commissioning The Book of Remembrance, a hand-lettered and illuminated book inscribed with the names of all Scotiabank employees who died in the two world wars that resides in the Memorial Room in the Bank’s Toronto headquarters.

Three Scotiabank employees who are veterans of Canadian and other Commonwealth forces spoke with us about why they served, current world conflicts, and why it’s still important to remember and honour those who served past and present.

A duty to remember

“We need to make sure we have encouragement across organizations and governments — actually make it a duty to remember, because if you have a duty that means you’re committed to those who came before and those who stand among us,” says Bob Bérubé, Vice-President, Operations at Scotiabank, Chair of the Scotiabank Veterans Network.

Bérubé, a retired Lieutenant-Colonel in the Canadian Armed Forces (CAF), grew up understanding that duty. His grandfather patrolled for U-boats in the St. Lawrence Seaway with the Royal Canadian Air Force in the Second World War and his father spent 35 years in the military as an Infantry Officer.

“From the age of 10, there was nothing else I wanted to do in life but serve. I’m not sure I understood what that meant, but I certainly saw the example through those two people in my life,” he said.

Bérubé joined the CAF at 18 and by age 21, he was a platoon commander of 45 soldiers, serving with the UN mission in the Balkans with the Royal 22e Régiment, colloquially known as the Van Doos. His 25-year career also saw him deployed in Africa, Jamaica and Afghanistan.

It’s not because we don’t have soldiers in armed conflict, or that we’re not an active participant in a conflict, that it doesn’t affect Canada.

In 2018, Bérubé helped establish Scotiabank’s employee resource group for military veterans and reservists. “We started to look at how we could promote the benefits of having employees with military service and what they bring to the Bank. We got the idea to create a more formal structure within the Bank to demystify military service, so it actually became part of the Diversity and Inclusion strategy,” he said.

People tend to think Remembrance Day is about old, WWI and WWII veterans of which there are very few remaining, because Canada commemorates service in all conflicts on a single day created after the First World War, Bérubé said. “There are villages in Europe that celebrate their liberation, sometimes for both world wars, because they had conflict of a massive scale on their soil, not once, but twice within the last century,” he said, adding Canadians haven’t experienced anything like that since the War of 1812.

“Europeans see themselves facing a potential disaster situation with what’s happening in Ukraine. I have friends who are serving in the militaries of Lithuania, Estonia, and Poland, they see this as an omnipresent, constant and very real threat on their borders,” he said.

Also, with global economies so interconnected, Bérubé said it’s hard to ignore the threat to energy and food security, which is already becoming evident. “It’s not because we don’t have soldiers in armed conflict, or that we’re not an active participant in a conflict, that it doesn’t affect Canada.

“If we forget that, then we allow conflict to propagate and that has an impact on all our lives, whether it’s here, there or somewhere far off,” he said. 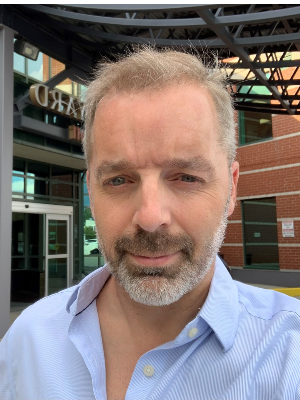 Freedom is a privilege

“Democracy as we know is fickle and freedom is a privilege and at times we have to protect that privilege by sacrificing those things we hold dear,” said Ricardo (Ricky) Blackwood, Senior Manager Executive Protection Physical Security, Corporate Security at Scotiabank. Blackwood said he moved his family to Canada from Jamaica to give his children “a normal childhood” free of violence and crime.

As part of his duties as a Major with the First Battalion Jamaica Defence Force between 1996 and 2011, Blackwood was deployed to neighbouring Caribbean islands devastated by hurricanes. But his most difficult assignment was being called on to quell violence in Kingston, Jamaica during the 2010 conflict between the military and police forces and the Shower Posse drug cartel.

Blackwood said that while military involvement was necessary to bring about a resolution, there was collateral damage and backlash from the public. “Having a flashpoint like that had the potential to affect the economy and confidence in the governance of the country in the eyes of the rest of the world,” he said.

Loss of life isn’t something Blackwood takes lightly. “Life is a valuable thing. It must be upheld and protected at all costs,” he said. It’s what he thinks about with the conflicts in the world today — whether it’s in Ukraine or parts of Africa, the resulting loss of life and the profound effect war has on livelihoods and lifestyle for years to come is horrific.

“The further we get from the last world war we seem to forget that institutional knowledge of how horrific it was. There are now several generations who have no idea what that was like,” Blackwood said.

He said military service had a profound impact on him, not because of what he was deployed to do, but because he was a part of something greater than himself. That’s a sentiment he shares with colleagues across the Bank’s operations through the Veterans Network.

“The network connects not only Canadian veterans and reservists, but veterans from Jamaica, Britain, New Zealand, and the United States. We are all united in that we believe in service to our nation and to supporting those who currently serve, or who intend to serve one day.” Standing up for freedom

Signing up for duty in the New Zealand Defence Force’s Army was by default for Matt Bourdot, Scotiabank Branch Manager, Kensington Road, Calgary. He and his best mate at school applied to join the police force together, but when his friend failed his fitness test due to minor asthma, Bourdot pulled his application.

He then turned to the army to keep himself out of trouble until he could figure out a career, working his way up from foot soldier to infantry field engineer to corporal while building bunkers and military cities during the first Gulf War and helping keep the peace in Papua New Guinea with the United Nations.

While Bourdot recognizes that Commonwealth countries, and in particular Britain, Australia, New Zealand, and Canada, are struggling to fill their military ranks, he says it’s important to have people with the right mindset who will do the job effectively.

“For me, service unified me with my country as a New Zealander. I found value in giving back to the people that went before me, who gave blood, sweat and tears for the country I’m proud to be a part of. I was a small cog in the wheel. There’s value in standing up for your country and its allies,” he said.

People don’t want the kind of structure a military career brings to their life, Bourdot contends. “They like the freedom they have, but they don’t understand where that freedom comes from.”

Freedom and democracy shouldn’t be taken for granted, he said, pointing to countries where militaries were called on to defend the people and ended up with a coup. “It can happen in any democratic society. Things can go sideways really, really quick,” he said.

To read more about Scotiabank’s veterans and reservists and what they bring to the Bank and their communities click on the stories below:

A lesson in relationships serves one soldier-turned-banker well

Helping LGBT+ find a safe place to be themselves