A lesson in relationships serves one soldier-turned-banker well

By the time he entered high school, David Sutcliffe had mapped out his career path. His plan included joining the Canadian Armed Forces, something he saw as a stepping-stone to a career in finance that would help build confidence and key life skills. Now at 32 years of age, his longer-term goal is falling into place.

As a Corporal with the Cameron Highlanders of Ottawa, Sutcliffe served his country in Afghanistan. He has also earned a Professional Accounting Diploma from Algonquin College and a Certified Financial Planner designation, spent a brief time at an accounting firm doing tax returns and has been working at Scotiabank for almost three years.

His interest in finance was piqued by poring over stock tables with his father. “I got interested in the stock market at a pretty young age — I actually placed my first trade when I was 12 years old,” Sutcliffe says.

Around the same time, the seed to join the armed forces was sown by a middle-school teacher who did a tour with the United Nations peacekeeping operation in Cyprus during the late 1980s. “It was the best three years, it pushed my limits, showed me what I was capable of doing and built confidence,” Sutcliffe recalls his teacher saying. In 2004, at the age of 16, Sutcliffe joined the Cameron Highlanders. By 2008, infantry in his unit of primarily reservists began filling in the ranks in Afghanistan and Sutcliffe got the opportunity to join them in 2010.

Sutcliffe, pictured above with a group of Afghan children, says the skills he learned with the CAF in Afghanistan are helping him succeed in his role as a Senior Financial Advisor at Scotiabank in Ottawa, a position he started this past January.

Living in an outpost on the edge of a small village and interacting daily with the locals made him appreciate Canada and all the opportunities open to him, but it also taught him valuable relationship lessons. As part of a tactical team that engaged with village elders and religious leaders, he says, succeeding in their mission required being able to listen and hear what the locals needed. That’s a skill every financial advisor can use. “Everybody brings a different story, families and life goals, and you have to support them by listening to their needs,” Sutcliffe says.

He also relies on the soldier’s motto of ‘having each other’s backs,’ in his current role. “A team environment is something I really enjoyed from the army side,” he says. At the branch he works in, Sutcliffe is part of a small team that, he says, “always covers each other’s backs,” whether it’s supporting each other in helping a client or backing up tellers during a busy period.

He keeps two photos on his desk as a reminder of the importance of these skills: One is of the key members of his team atop their compound after their last patrol; the other, taken just after he arrived, is of him and a local Afghan boy sitting on a wall.

The other important relationship-building Sutcliffe does today is with colleagues outside his department — veterans and non-veterans — to build a network to propel his career and pass it on. Sutcliffe says that despite the Bank’s size, “everybody has the opportunity to network and mentor. It’s a mutually supportive environment,” he notes. 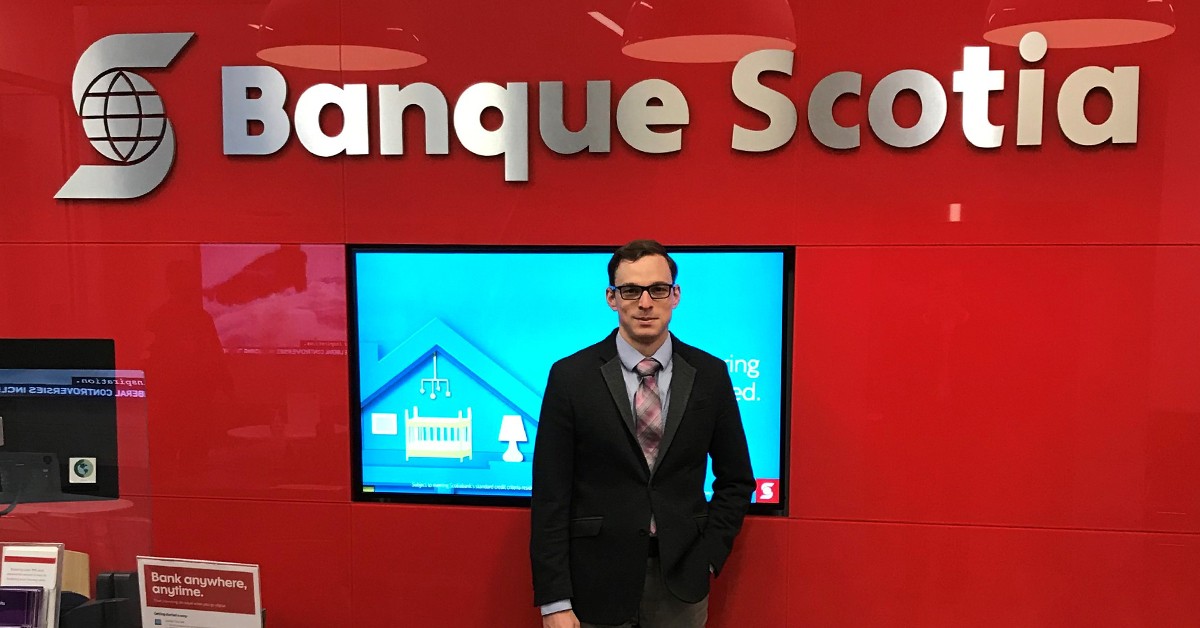 David Sutcliffe, Senior Financial Advisor at Scotiabank in Ottawa, has served in Afghanistan as a Corporal with the Cameron Highlanders of Ottawa.

Connecting retired and reservist military personnel to share stories and support each other is one of the key reasons the Scotiabank Veterans Network was launched three years ago. On Sutcliffe’s third day as an employee, he connected with a reservist from Montreal who introduced him to the network.

The Bank had an unstructured approach to veteran talent recruitment and development, says Coco Lefoka, Senior Manager, International Banking Strategy, who helped build the network. He notes that despite its long tradition of bankers serving in the military, Scotiabank lacked a formal support structure for retired soldiers and active reservists. More than 60 identified veterans and reservists work at Scotiabank.

“Everybody has the opportunity to network and mentor. It’s a mutually supportive environment."

More than 600 of the Bank’s employees enrolled to serve in the First World War. Among them was Sydney Frost, who volunteered for the Royal Newfoundland Regiment. In 1918, Frost received the Military Cross for bravery and leadership in the battle at Keiberg Ridge near Ypres. He went on to become President and CEO of Scotiabank. The stories of Scotiabank employees who served in the First and Second World Wars are relatable for Sutcliffe, who says they make him proud to be at Scotiabank.

While the Scotiabank Veterans Network serves to connect Scotiabank’s veteran and reservist employees, its more pressing purpose is to build a pipeline for recruitment and a means to support recruits through onboarding, network building and career advancement.

It was important to get the business line functions at the Bank to think differently about veterans, Lefoka says. “They are soldiers, but they’re also well trained and bring a host of qualities to an organization like ours. They understand the concept of mission, are team oriented, highly detailed and focused, and perform well in high stress environments,” he adds.

As COVID-19 took hold this March, it became clear reservists at Scotiabank might be called on to serve. SVN worked with Human Resources on a plan to update the Bank’s leave policy, which at that time only made provisions for the two weeks of training reservists are required to complete each year. More than 15 of Scotiabank’s reservists volunteered for Operation Laser, the Canadian Armed Forces response to COVID-19. In the end, three were called to help.

Sutcliffe wasn’t among them but applauds his employer’s commitment to offer pre-approved leave, paid leave for the first two weeks of deployment, continued benefits, and a stipend to mitigate any financial loss. “It means reservists can go do their duty and not have to worry about their families or any pressures to return to work,” Sutcliffe says, recalling there were reservists with him in Afghanistan who didn’t know if they had a job to return to. “That isn’t Scotiabank,” he says. “It’s 100% behind everybody who has to go serve.”

“While the compensation is great, having the confidence they could go do something very important and have a job to come back to is the most important support,” Lefoka says. “It’s important to recognize we have this great talent pool, but they also perform really important functions and services for Canada.”

Honouring that service and tradition is why Coco Lefoka volunteers his time to SVN. As an immigrant from the Kingdom of Lesotho, who had family in South Africa during apartheid, he knows the key role men and women of the Canadian Armed Forces have played in securing freedom and democracy not only for Canada but around the world.

Lefoka says Canadians are fortunate to have such a strong positive military heritage in the First and Second World wars, in the Korean War and with the UN.

“There are these profound, yet sometimes not fully understood, tremendous acts of valour by Canadian soldiers that have played a role in advancing the cause of freedom in the world.”

Interested in the impact of the pandemic on Canada’s economy, including the job market, real estate, financial markets and more? Subscribe to Pandenomics, our podcast exploring those issues with Scotiabank economists and other experts. Available on Apple and Google podcasts.