Growing up in Stony Plain, Alta., Stephanie Labbé played a variety of sports just to meet and be with other children. Soccer, which she first signed up for at age 11, at first, was just another excuse to be with her friends.

“I wanted to play every sport I possibly could. Whatever my friends were playing, I asked my mom to register me in it. Soccer was no different. Then, as I got older, I started to see the competitive side of sport and that’s what really made me want to take soccer more seriously,” says the recently retired goalkeeper of the Canadian Women’s National Team.

Labbé has won her share of medals and accolades throughout her soccer career, including Olympic Bronze and Gold, but it is the friendships and life lessons such as learning to build confidence and self-esteem, learning to work with others, and to set goals and work toward them that she hopes to pass on to the next generation of players.

To help give more Canadian youth a running start, Labbé joined Scotiabank, Hope and Health and One World Play Project® at Scotia Barn in Burnaby, B.C., this April, to launch Scotiabank Fútbol Club (Scotiabank FC) in Canada. The Bank’s grassroots platform has brought soccer to more than half a million young people at all levels in remote and underserved regions across Latin America since 2014.

“I know how powerful sport can be, not just soccer, but any sport,” she said in an interview.

“When I look back on my career, yeah, I remember the championships and the medals, but there’s so many other memories that come to mind first, like all of the lifelong friendships I’ve gained and the lessons I’ve learned.”

Scotiabank and Hope and Health, a B.C.-based Indigenous-led organization, will support the construction of mini soccer pitches in six Indigenous communities in B.C. by the end of 2024, as part of the Be The Change mini-pitch initiative. Construction will start with Stz’uminus Nation and Snaw-Naw-As Nation this year. The Bank is also partnering with One World Play Project® to donate up to 5,600 ultra-durable red soccer balls (they never go flat or need a pump) in 2022 to local organizations in the province.

As the platform grows in Canada, Scotiabank FC and FC Barcelona Foundation plan to introduce FutbolNet — a program that uses sport as a tool for education, inclusion, and reinforcement of the fundamental values of respect, tolerance, and teamwork — to the country.

“Scotiabank FC has been such an incredible success across Latin America over the past eight years, it only makes sense to bring this program to Canada,” says Stephen Gaskin, Regional Senior Vice President, British Columbia and Yukon, Scotiabank. “Scotiabank FC has proven to have a transformational impact on kids and communities, and I am thrilled the program is beginning in B.C. so that we are able inspire positive futures through the power of sport.”

I remember the championships and the medals, but there’s so many other memories that come to mind first, like all of the lifelong friendships I’ve gained and the lessons I’ve learned.

For Labbé, having role models was also an important part of her success. Early on, she looked up to her brother Kevin Labbé, who played hockey in the Western Hockey League (WHL) in the late 1990s. “He was the one I saw day in and day out. I saw how he approached sport, the professionalism that he took toward nutrition and training, and I tried to be just like him and do the things that he was doing,” she said.

Later, as her involvement in soccer grew, she took inspiration from Canadian Women’s National Team goalkeepers Karina LeBlanc and Erin McLeod — who, Labbé said, she was fortunate enough to have as teammates later in her career— and from Canadian women’s hockey legend Hayley Wickenheiser.

Winning Gold at the 2020 Tokyo Olympic Games was the pinnacle to a career that included playing at the college level and professionally in the United States, and Sweden. As a goalkeeper with the Canadian Women’s National Team since 2008, Labbé helped Canada finish first at the 2011 Cyprus Women’s Cup and the 2016 Algarve Women’s Cup. She was also on the roster for the FIFA Women’s World Cup in 2011, 2015 and 2019, and was in goal when the Canadian Women’s National Team won Bronze at the 2016 Rio Olympic Games.

The Canadian women were the underdogs heading into the final in Tokyo against a very strong Swedish team, but that didn’t matter. “We were so focused on what we wanted to accomplish. The unity and connection we had as a team was so incredibly powerful. To be able to accomplish something so big with some of your closest friends and the people you respect and admire is a special thing,” she said.

The feeling of satisfaction that comes after working so hard to reach peak performance on the world stage, and have confidence in yourself, is something Labbé hopes initiatives like Scotiabank FC will give more young people across Canada.

“We were all those little kids that had a dream. There were so many people, not only in Canada but around the world, that didn’t believe in us and didn’t think we could achieve that pinnacle. But we set our dreams as high as they could go, and we worked really hard to achieve them. 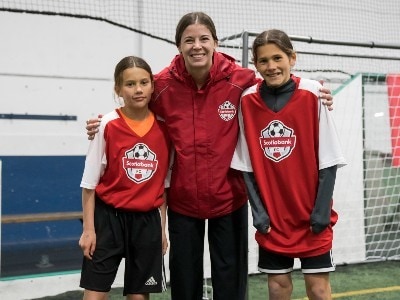 “I think that’s the biggest message: Whatever your dream is, don’t set a limit on it. The sky’s the limit and anything that you want to achieve, if you put in the work and you love what you do you can achieve it,” Labbé said.

This summer, Labbé will travel across Canada on her Champion Tour holding a number of youth soccer clinics throughout May, June and July through local soccer clubs. “I’m excited to be able to go across the country and reconnect with everybody and share the things I’ve learned, and my experiences, and give back to the country that supported me.”