BCCH COULD BE FORCED TO CONTINUE RAISING THE BENCHMARK RATE

The Chilean peso (CLP) has experienced an almost secular depreciation against the US dollar since April 2022, recently exceeding CLP 880. For many, this reflects the appreciation of the US dollar in the wake of an accelerated rate of policy normalization by the Federal Reserve. In our view, however, there is an idiosyncratic component in the CLP depreciation that is evident in a real exchange rate (RER) that in June reached its second highest level since the floating exchange rate regime was implemented in 2001 (chart 1). We estimate the RER around 112.4 points in its base measure (1986=100), just 1% below the level reached in December 2021 in the middle of the second presidential round, despite the increase in external prices and recent records of high inflation. 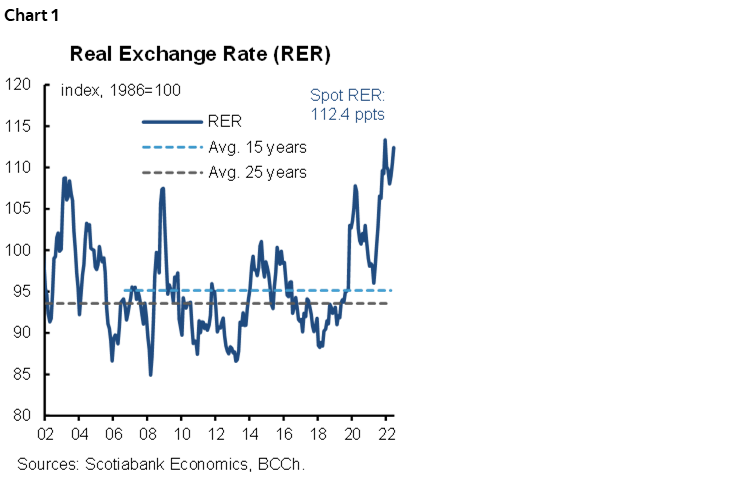 The depreciation of the CLP goes beyond external factors, and is driven by higher domestic political uncertainty and portfolio balance factors. Simple models to determine the CLP point to a misalignment since the October 2019 (social unrest) of between CLP 70–100 with respect to traditional determinants. More recently, the CLP has been subject to an increased level of misalignment, even after controlling for political uncertainty (chart 2). In fact, the misalignment becomes evident when we observe that the CLP is among the currencies with the greatest depreciation against the US dollar in recent days (chart 3). 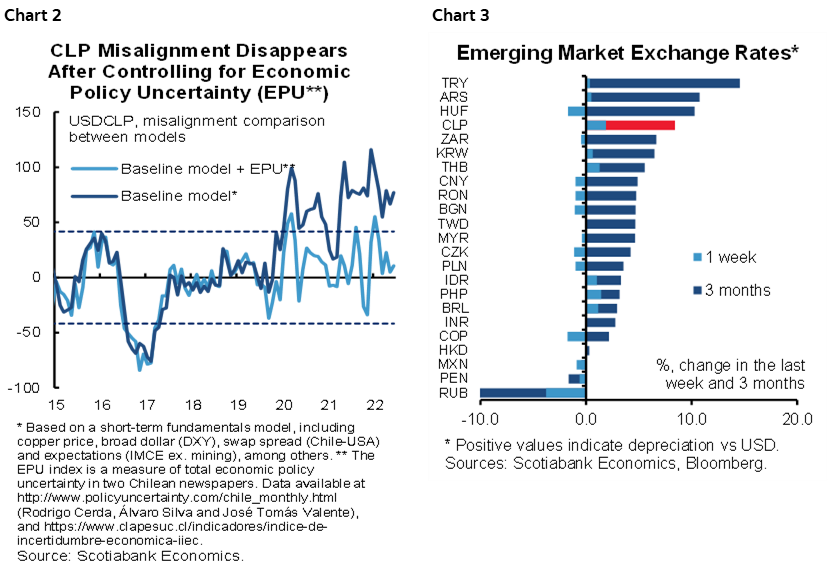 CLP depreciation has not been accompanied by short-term liquidity problems as in the past. The on-shore spread with external interest rates remains stable for all terms (chart 4), suggesting that the CLP depreciation is not responding to the absence of foreign currency or exchange rate mismatches. However, we cannot rule out the possibility that, prior to the exit referendum for the new Constitution on September 4, there may be episodes of foreign currency illiquidity that may require central bank intervention to avoid the undesired increases to the cost of sovereign financing. 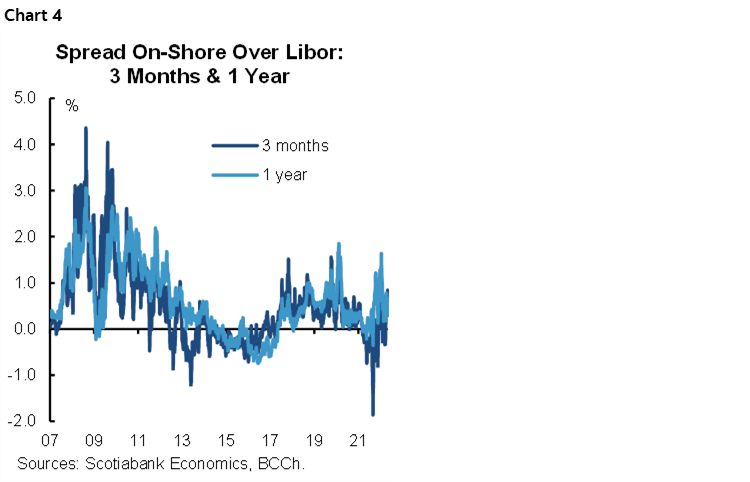 Meanwhile, pension fund administrators (AFPs) are not cushioning the unwinding of carry trades (chart 5). Short-term foreign investors have been betting in favour of the CLP since the beginning of 2020. With some temporary easing, the NDF position was in positive territory earlier this year, but since April it has started to unwind, coinciding with a more aggressive stance by the Fed regarding the evolution of inflation. This unwinding, which brings with it the purchase of USD forward, has not been contained despite the improvement in the interest rate differential. Equally worrisome has been the diminished buffering role of AFPs that have not been big sellers of USD in the face of a modest shift in contributors to conservative funds. A similar phenomenon, although somewhat more intense, occurred after the social unrest, where external and local movements towards the purchase of USD (spot and forward) exacerbated the depreciation of the CLP. 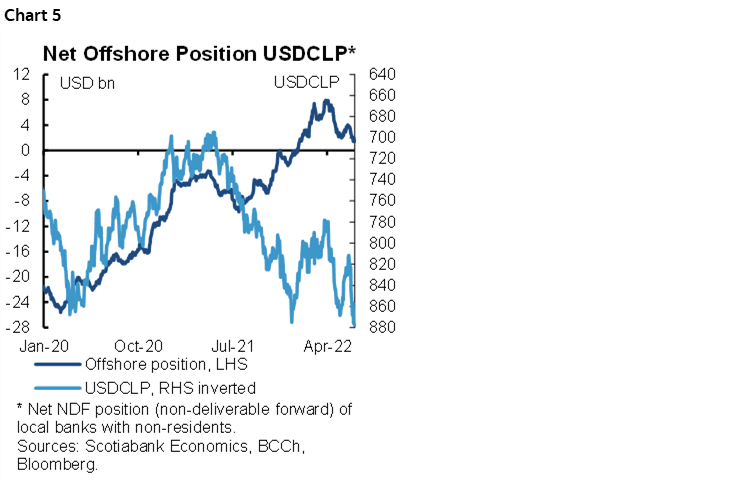 Arguments have already been made in support of foreign exchange intervention or other measures to mitigate the idiosyncratic depreciation of the CLP. However, the success of these measures is not assured. Traditional indicators to assess the adequacy of international reserves (IR) give mixed messages, albeit with a slight positive bias. In terms of IR/GDP, at a ratio of around 15%, the situation looks somewhat better than that observed before the pandemic after the IR accumulation process (not completed) carried out by the central bank (chart 6). Meanwhile, thanks to better sovereign debt maturity management (liability management) together with a lower intensity of corporate and banking external indebtedness, the situation with respect to Short-Term Residual External Debt looks favourable, with an index of 1.38, below what was observed in the recent past (chart 7). That said, international reserves look low compared to imports. In fact, given the strong rebound in consumption, which has led to a significant increase in consumer goods imports and higher imports of capital goods, the ratio is below the levels observed in the last 4 years (chart 8). There are insufficient reserves to conduct a large-scale intervention in the event that the central bank opts for a direct sale of dollars in the spot market. A sale of USD greater than USD 10 bn would leave international reserves particularly low. Consequently, such a strategy could only lead to short-term appreciations of the peso, given the lack of credibility in the firepower. Alternatively, an intervention targeting the idiosyncratic component of the CLP depreciation, with a sale of between USD 5–10 bn accompanied by micro or macroprudential policies that discourage dollarization, could have impacts that are more favorable.

In our view, if the CLP depreciates towards 900–920 through end-June, the central bank would likely move faster than expected for the next July’s monetary policy meeting in raising rates and implement a foreign exchange intervention coordinated with the Ministry of Finance (micro/macroprudential measures). In this scenario, we do not rule out an accelerated USD liquidation process to finance the fiscal spending committed for the rest of the year.