The global economy cannot avoid a recession. There should be little debate about economic prospects in China and Europe, the 2nd and 3rd largest economies in the world. Both are either experiencing dramatic slowdowns already or are set to do so in the coming months. In China, this is the result of still aggressive COVID management, weather-related disruptions, challenges in the housing sector, and a sharp slowdown of exports. In Europe, the weakness flows from the impacts of the war in Ukraine on energy availability and costs, the lagged impact of rising input costs, weather-related disruptions in industrial activity, and of course, eventually, the impact of rising policy rates to counter inflation.

Compounding these powerful headwinds are a series of policy missteps that are largely related to inflation management. These missteps began with delayed reactions by monetary and to a lesser extent fiscal policymakers to what had clearly become more persistent inflation. Central banks were slow to accept that inflation dynamics reflected more persistent determinants owing to an overweighting of the supply bottleneck thesis. This contributed to the current inflation challenges in at least two important manners. It led to a loss of central bank credibility, leading to some unmooring of inflation expectations. This was clear as early as March 2022. It also led to a delayed response by policymakers, as they waited too long to begin normalizing policy. The decisions underlie to a large extent the catching-up that central banks are undertaking around the world: rapid interest rate adjustments to levels that are almost certainly higher than would have been necessary had policymakers taken more decisive actions much earlier than they did.

On the fiscal front, it is also abundantly clear that pandemic support measures could have been rolled back more rapidly at the global level. While true that fiscal balances have been improving rapidly thanks in large part to rapidly rising revenues, the inflation outcome suggests that consolidation should have occurred at a more rapid pace. More recently, governments have been trying to protect the most vulnerable populations from the harmful impacts of inflation. Inflation is unquestionably more damaging to lower-income households than the rest of the population, so it is natural for governments to want to blunt the impact of reduced purchasing power on those households. As designed, this fiscal support has the unfortunate impact of blunting central bank efforts to fight inflation and may ultimately require higher interest rates to lower inflation. In Canada, for instance, we estimate that the fiscal measures announced at the federal and provincial level will require an additional 25 basis points of tightening. The challenge of coordinating monetary and fiscal policies was clearly illustrated by the dramatic reaction to the UK’s attempt at a growth reset which saw markets react violently to a fiscal plan that was clearly going to raise inflation and imperil financial stability. Though most of the elements of that package have now been reversed, the episode serves as a stark reminder that policy actions and risks around them represent a key determinant of the outlook.

The impact of these and other policy challenges, along with the broad range of other developments noted above, are having significant impacts on markets and the outlook. Rates throughout the yield curve have shown incredible volatility in recent weeks, and equity markets have generally struggled. This is the consequence of the environment we find ourselves in. Few have strong convictions in their calls leading to dramatic swings in pricing when incoming data challenge a narrative or when policymakers are thought to err. The fall in asset values and tightening in financial conditions adds to the global headwinds being managed by firms, households, and governments.

In the United States, we now believe the Federal Reserve will need to hike its policy rate to 5% by early 2023. This is 150 basis points more than our last forecast. There are a few main reasons for this change in view. It is clear that the Federal Reserve is less forward-looking and more data-dependent than reaction functions typically assume. Inflation has remained stubbornly elevated in the US, and the most recent monthly prints do not suggest a cooling of pressures despite a large reduction in some of the upstream drivers of inflation. Confidence in inflation forecasts is low. This has prompted the Federal Reserve to indicate through its dot plots that it plans to hike interest rates to 4.5% by the end of this year. While we normally don’t pay too much attention to dot plots, the fact that the Fed is communicating a need for such a tightening in just under three months gives them very little room to not follow through on this guidance. This additional tightening and a substantial decline in equity markets (impacting household wealth) are enough to trigger a recession. Our current view is that it is likely to be reasonably mild given that balance sheets remain strong. Output growth is expected to fall from 1.7% in 2022 to 0.4% in 2023, with output falling modestly in 2022Q4 and 2023Q1. The unemployment rate would rise from its September level of 3.5% to 4.7% by the end of next year.

The developments above are impacting the Canadian outlook. Lower commodity prices, elevated uncertainty, lower equity values, and a weaker US are all acting as brakes on growth. We expect growth to slow from 3.2% in 2022 to 0.6% next year and for the economy to enter a technical recession in the first half of 2023. These headwinds are compounded by our belief that the Bank of Canada will now need to raise its policy rate to 4.25% by the end of the year. This change in view on our policy rate forecast—our last forecast expected the policy rate to peak at 3.75%—reflects in equal measure the fiscal support measures being rolled out domestically, as well as the impact of a rapidly depreciating Canadian dollar. Both developments will put upward pressure on inflation, though we take comfort from the fact that there are some signs that inflation is moderating in Canada, in contrast to the US. Inflation is now expected to average 6.9% in 2022 and slow to 3.9% in 2023. The BoC’s inflation target is unlikely to be reached until 2024 and should mildly undershoot the target in the second half of 2024.

Though we now expect what might be called a technical recession in Canada, we believe the economy will essentially stall in the first half of 2023. The decline in economic activity is likely to be minor and short-lived owing to the underlying resilience of the economy. Firm and household balance sheets remain strong, and the labour market is still dramatically short of workers. Regardless of the headwinds coming from beyond our borders, the simple reality is that Canadian firms are confronting serious challenges in their ability to increase production owing to these labour shortages. The slowdown we forecast should relieve some of the pressure on the labour market as we expect the unemployment rate to rise from the 5.2% observed in September to 6.3% by the end of next year.

We continue to believe that risks to the outlook are principally related to the evolution of inflation and the policy actions that might be needed to respond to stronger-than-expected increases in prices. If inflation does not soon show signs of cooling in the US, the Federal Reserve will be forced to raise policy rates well above 5%, leading to a much sharper reduction in economic activity than currently predicted. The risks of this are non-negligible given the stubbornness of inflation and the very strong increase in wages observed. This would have a large impact on the global economy and Canada even though inflation risks seem much more balanced north of the border. 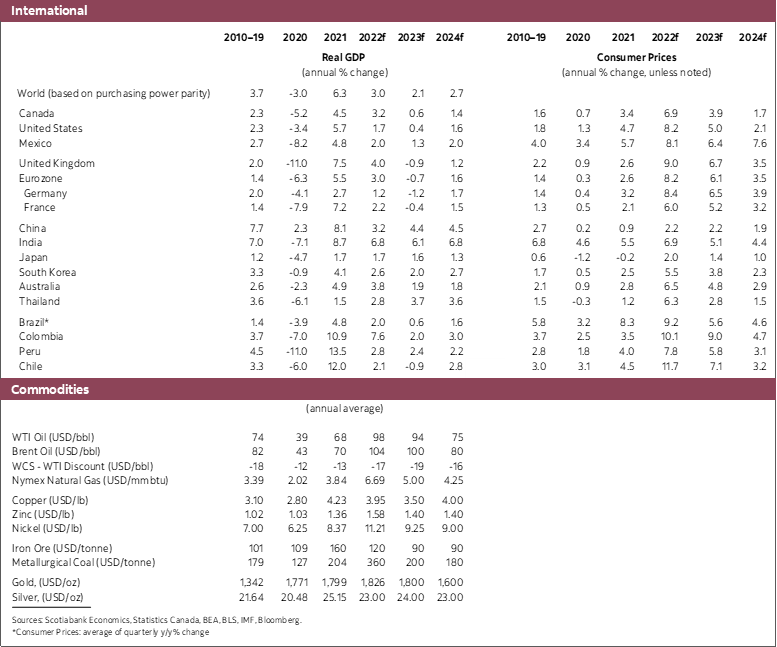 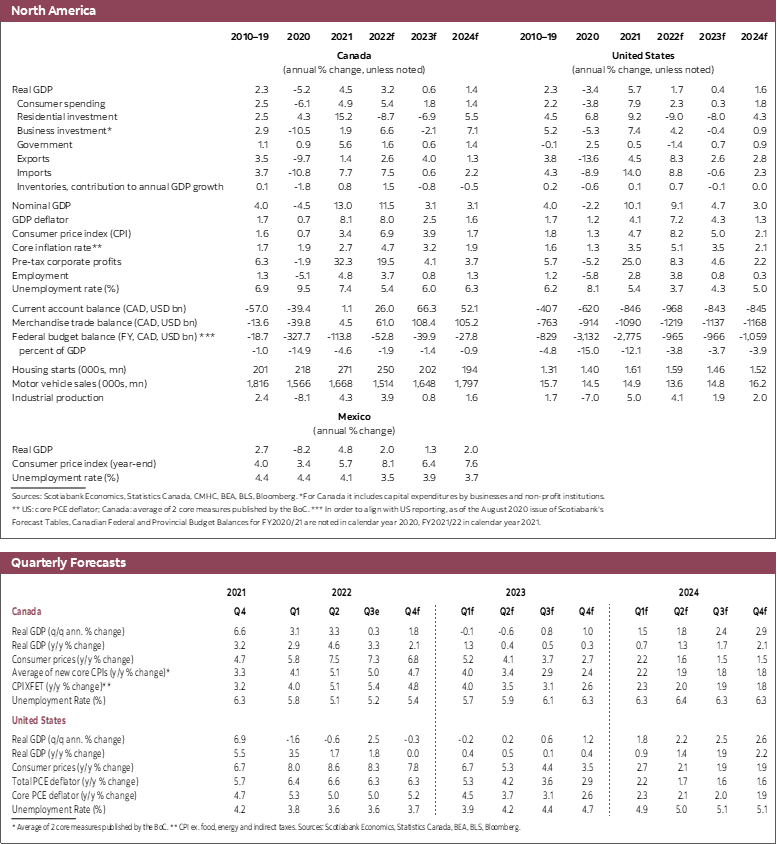 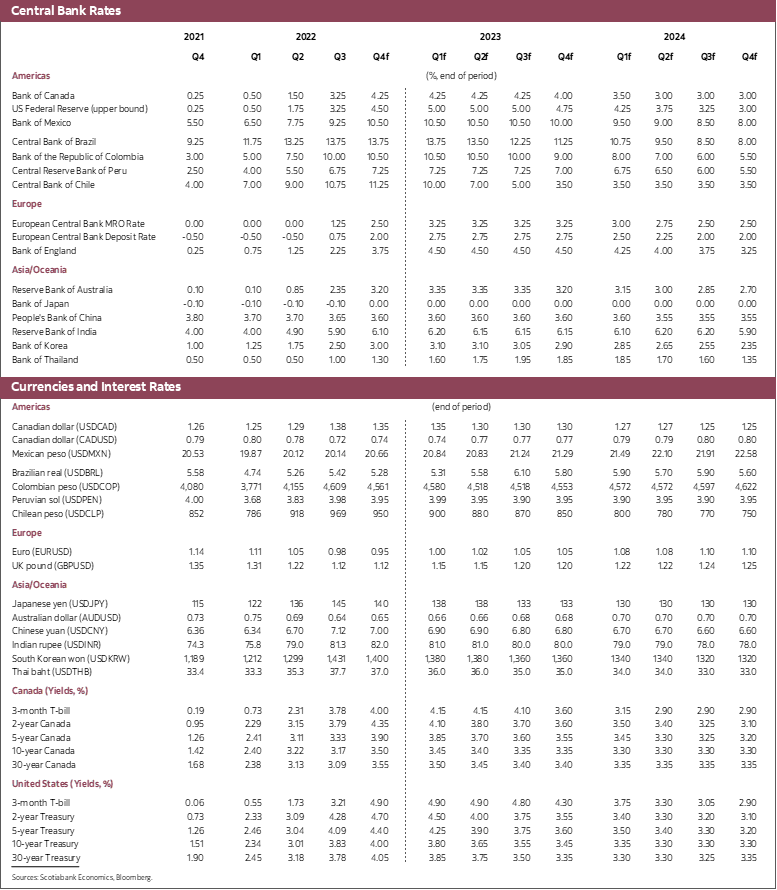 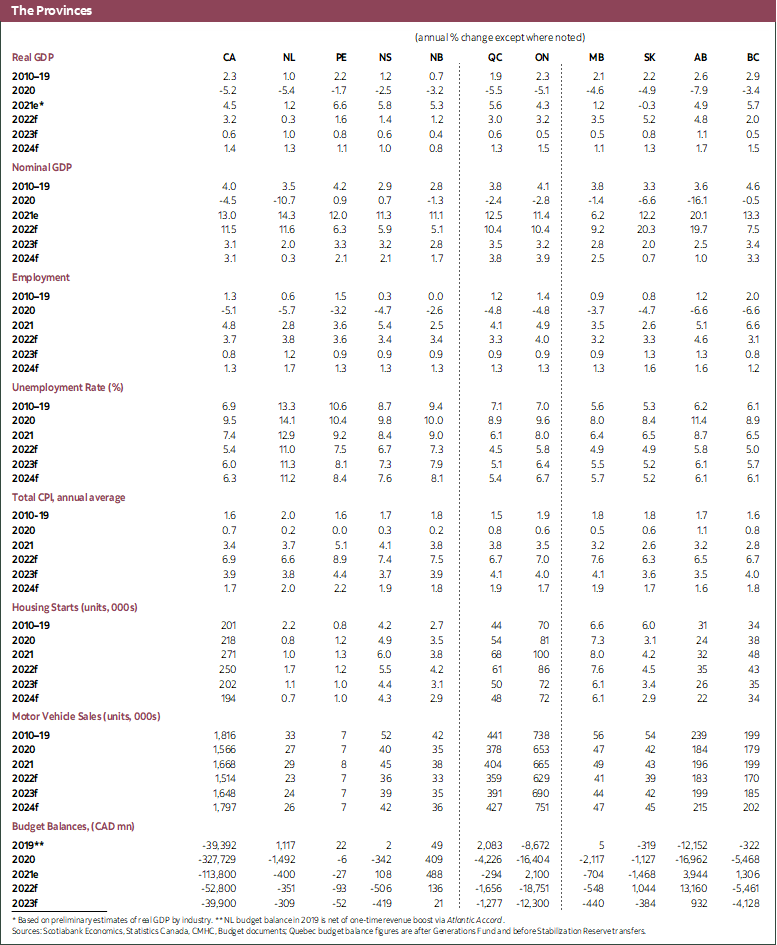