With inflation on the rise and capacity pressures evident in a broad range of sectors, we now believe monetary policy settings in Canada and the United States will tighten sooner and to a greater extent in 2022 than earlier forecast (chart 1). The simple reality is that the very serious public health impacts of Omicron and the associated economic consequences do not outweigh the pressing need to withdraw monetary stimulus. Moreover, the economic impacts of Omicron are almost certain to be temporary, with lost ground made up rapidly once it passes, as was the case in previous COVID waves. As a consequence, we are scaling back our 2022 forecasts for growth in both the US and Canada, though first quarter growth rates will be the most substantially affected by the virus.

In Canada, economic momentum remains strong. Growth in the final quarter of 2021 is likely to have hit around 5.5%, well above our earlier forecasts despite the impacts of the BC floods and landslides and Omicron-related impacts late in the quarter. Though Omicron is expected to shave about 5 percentage points from the quarterly growth rate in Q1-2022, we nevertheless expect growth of 0.4% in that quarter. Much of the lost output in the first quarter will be made up in the second quarter or beyond, resulting in growth of 3.7% in 2022, followed by an expansion of 3.3% in 2023.

Many signs continue to suggest the economy is near or has already hit capacity constraints. The labour market was very robust in the final months of the year: Employment was well above pre-pandemic levels in December, the unemployment rate just a touch above where it was pre-pandemic, and the participation rate just a touch below pre-pandemic levels. Worker scarcity is now a critical challenge for firms, as the number of job vacancies and the job vacancy rate are at the highest levels since data have been collected. While there is mixed evidence of wage increases at present, it is clear that wages will need to rise substantially this year.

As a result of the views above, and some new research looking at the impact of supplier delivery times on Canadian inflation, we expect that inflationary pressures will be more persistent than in earlier forecasts, with total CPI inflation averaging 4.3% in 2022 and 3.2% in 2023. If we are right, inflation would be well outside the BoC’s inflation control range this year and remain outside it next year. Indeed, recent BoC surveys confirm that inflation is a key worry for both firms and households. That may be an indication that inflation expectations are in need of more active management by the BoC.

The inflation outlook requires a more rapid withdrawal of stimulus than we have been forecasting. This is all the more important in light of the de facto, and inappropriate, increase in monetary stimulus that has been provided in the last few months as inflation forecasts have been ramped up despite unchanged policy rates, leading to a fall in the real policy rate (chart 2). With an interest rate increase almost fully priced in January, a pass by the BoC might actually loosen monetary conditions further if the CAD were to depreciate in response. We now forecast a 25bps increase in January, followed by a similar move in March and a 50bps move in April. A total of 175bps of tightening this year is expected, followed by another 50bps next year for year-end policy rates of 2% this year and 2.5% in 2023. Even with this pace of tightening, the real policy rate would remain negative at the end of this year.

In principle, the BoC is still operating under the guidance it had provided earlier that it would only raise its policy rate when the output gap is closed in Q2 or Q3, though Governor Macklem did not repeat this guidance in his December speech. Circumstances are such that we believe a move is necessary in January despite that guidance, which needs to be scrapped whether they move or not. Moreover, the BoC is also likely to raise its own inflation forecast in the Monetary Policy Report even if it scales back its growth forecast for 2022 on account of a temporary growth hit from Omicron. This would make absence of policy action in January all the more striking.

As robust as the economic case for movement next week is, there is a chance that the BoC chooses to delay action until there is less uncertainty regarding COVID. This is the only plausible explanation they could use to move later in the quarter, but as is made clear above, we think the inflation outlook means the BoC does not have the luxury to have greater clarity on the public health front before changing its policy. Moreover, early moves in the policy rate stand a greater chance of impacting the spring real estate market, a perhaps not altogether unwelcome development from the BoC’s perspective.

We do not anticipate a linear move in policy rates as the year progresses. There will be 50bps moves and there will be pauses. The first of these 50bps moves could come in March or April. We have settled on April for the moment on the premise that economic data available in March will reflect the impacts of Omicron currently being felt. By April, there should be indicators showing the rebound underway from the current wave of the pandemic, giving Governor Macklem and his colleagues greater confidence that the economy requires a more rapid pace of stimulus withdrawal.

The Federal Reserve is also expected to raise interest rates substantially this year. We are now forecasting 175bps of tightening in the US, with a rate liftoff at their March meeting. Inflation has clearly spooked key FOMC members, with Chair Powell even noting that inflation was the greatest risk to achieving the full employment mandate in the US. The Fed must first completely taper its purchases before hiking, leading to a lag in relation to the BoC’s moves. Additionally, given the Fed’s dual mandate and the fact that US employment outcomes far lag those in Canada, there is slightly less urgency to the Fed acting. Hence our view that they move in March vs. a January lift off in Canada. 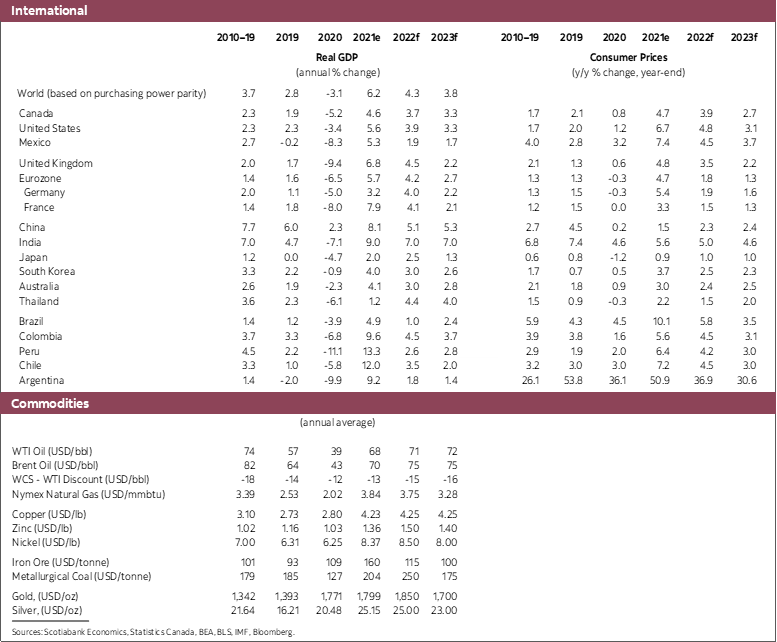 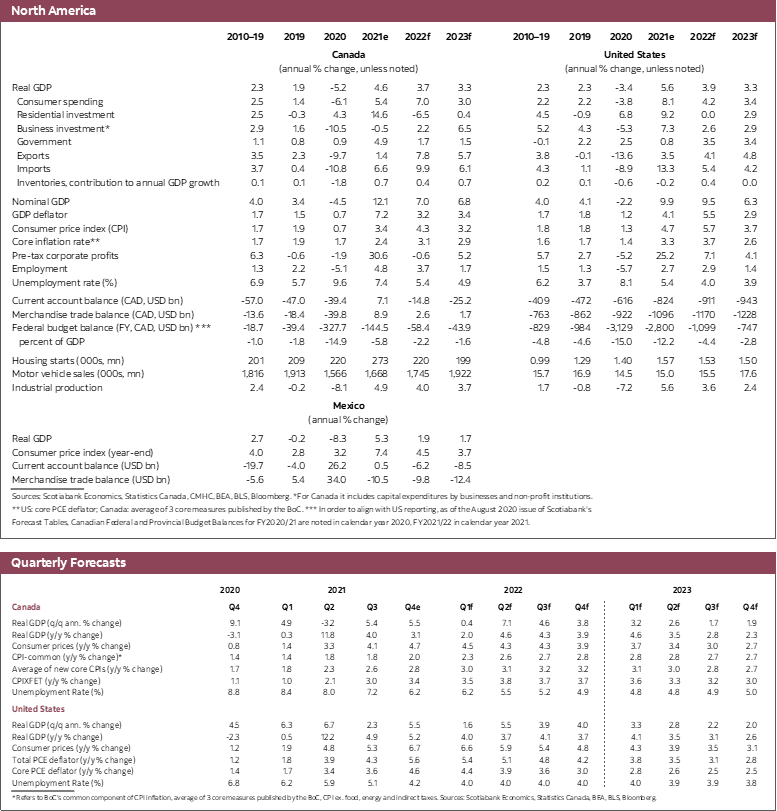 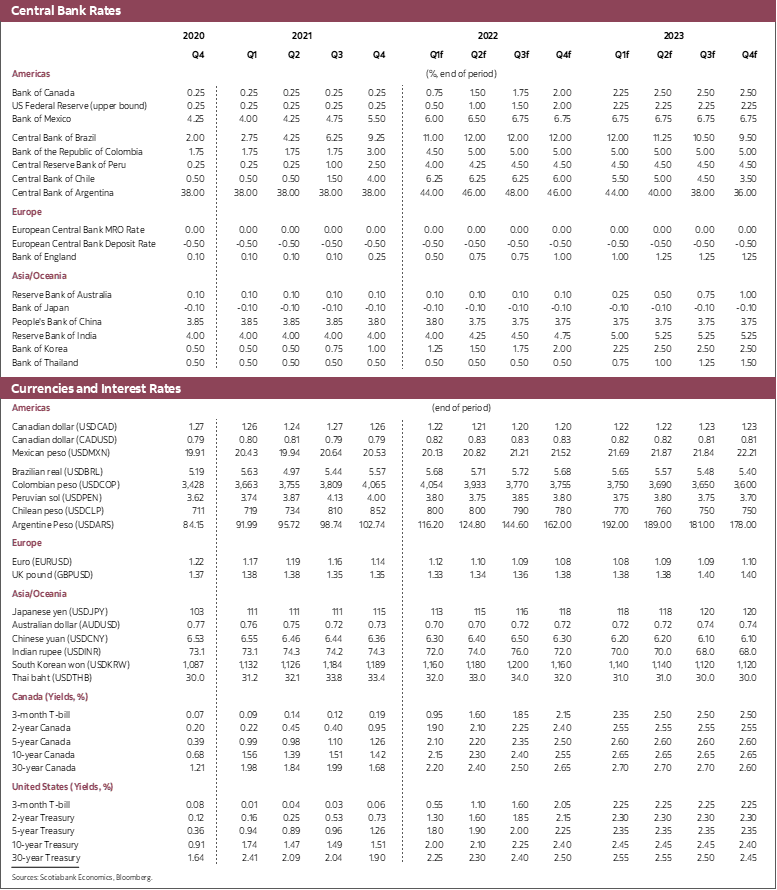 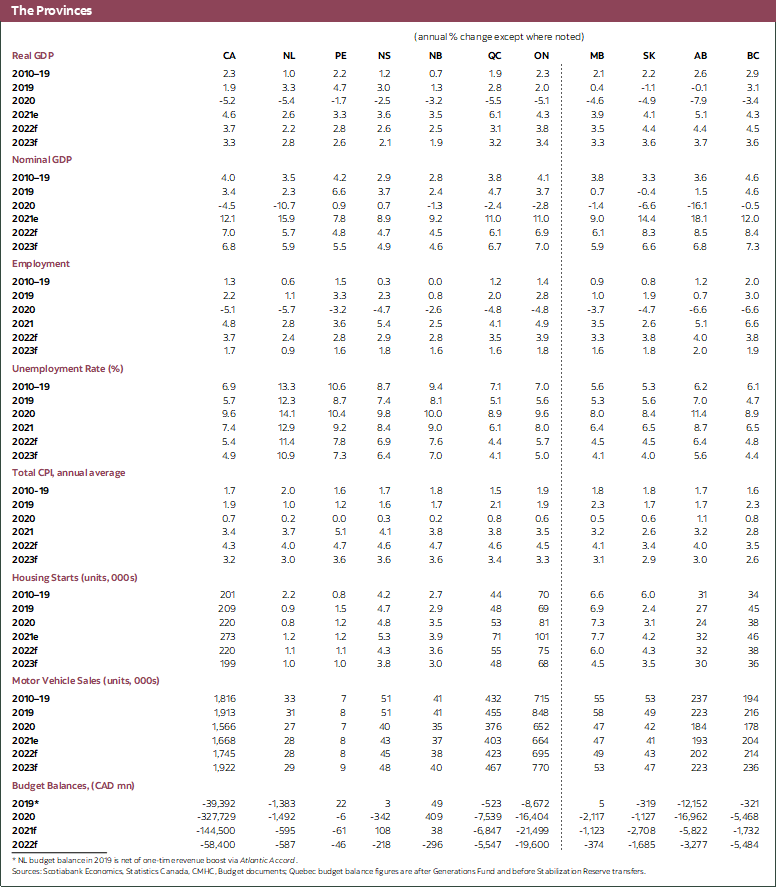