We begin by emphasizing that the COVID-19 pandemic has significantly impacted Ontario’s finances just as it has most jurisdictions around the world. Before COVID-19 reached Canadian shores, a return to black ink in Canada’s largest province was not expected until FY24. The government now anticipates that that will take at least another four years, and continues to assume that it will hit record debt and deficit levels within the forecast window.

Yet this is a conservative fiscal plan that leaves real possibility of upside for near-term budget balances. Time-limited funding to protect people and jobs is estimated at $6.7 bn in FY22 and $2.8 bn in FY23; those amounts are booked as expenses and accompanied by typical forecast reserves of $1 bn in FY22 and $1.5 bn in each year thereafter. The plan is also built on economic growth below the average of private-sector projections (chart 3, p.2), some of which date from before the recent announcement of additional US fiscal stimulus. Sensitivities in the budget link 1 ppt in nominal GDP growth with $1.1 bn in tax revenues; based on that estimate, our latest 2021 forecast of over 9% growth in Ontario nominal GDP would mean another $3 bn in government receipts in FY22.

Stepped-up Infrastructure spending should also support the recovery. Total outlays scheduled under the Ontario Capital Plan were increased by $4 bn over FY21–23 versus the November 2020 Budget (chart 4, p.3). Municipal public transit remains a key plank of the Plan, and a total of $4 bn is expected to be allotted to broadband internet infrastructure during the six years beginning in FY20.

Planning anchors look appropriate. The 50.5% upper limit on the net debt-to-GDP ratio—while technically a record high—should signal longer-run discipline to creditors and also leave room to bolster the recovery and address unexpected costs should they arise. Debt servicing costs are expected to rise gradually to nearly 10% of revenue over time—a natural consequence of the shift in interest rates and inflation expectations over the last several months—which would keep them low relative to history (chart 5, p.3). The province will also monitor net debt’s share of revenue; it expects this indicator to peak in FY26 alongside the net debt-to-GDP ratio. For the latter two indicators, the province’s stated objective is to reduce the rate of increase, supported by GDP growth.

Federal transfers and spending plans continue to mirror expectations about the pandemic’s trajectory. Like last year’s budget, this plan assumes that funds earmarked by Ottawa for pandemic relief will draw down by about $7 bn in FY22. By the same token, pandemic-related contingencies—registered within the plan as expenses—will completely wind down by FY24. Excluding those amounts, the province expects program spending to rise by more than 5% this year and more than 2% next year, then slow in FY24. Over the longer-run, program spending is assumed to advance by an average of about 2% per annum.

Total long-term public borrowing is forecast to total $59 bn in FY21, $54.7 bn in FY22, $59.1 bn in FY23, and $55.2 bn in FY24. For FY22 and FY23, those figures represent reductions of $3.9 bn and $0.2 bn, respectively, versus 2020 Budget projections. The province noted that at the time of publication, some 65% of FY21 borrowing had been completed in Canadian dollars, a portion lower than the 70–80% range typically targeted because of increased global demand for Ontario debt. To achieve a 6–8% share of total debt outstanding, short-term borrowing will be increased by $6 bn in FY22 and a further $2 bn in FY23. The average term of Ontario’s debt portfolio is 10.7 years, a level the province intends to maintain. Multiple Green Bond issues are planned for this year subject to market conditions.

The decision to include long-term fiscal forecasts and scenarios adds to the transparency and credibility of the plan while also acknowledging the elevated level of uncertainty in the outlook at this time. The base case fiscal forecast is associated with a return to black ink in FY30. Under the stronger economic growth scenario, balance would occur two years earlier; weaker growth would delay surplus until FY32 (chart 6, p.3). The province similarly projects that a stronger-than-anticipated expansion would result in borrowing requirements about $3 bn lower than under the baseline in FY22, $4.4 bn lower in FY23, and $6 bn lower in FY24. For net debt, the softer growth scenario would result in a 52% share of nominal GDP in FY24; a faster expansion would mean a peak 48% share in FY23. 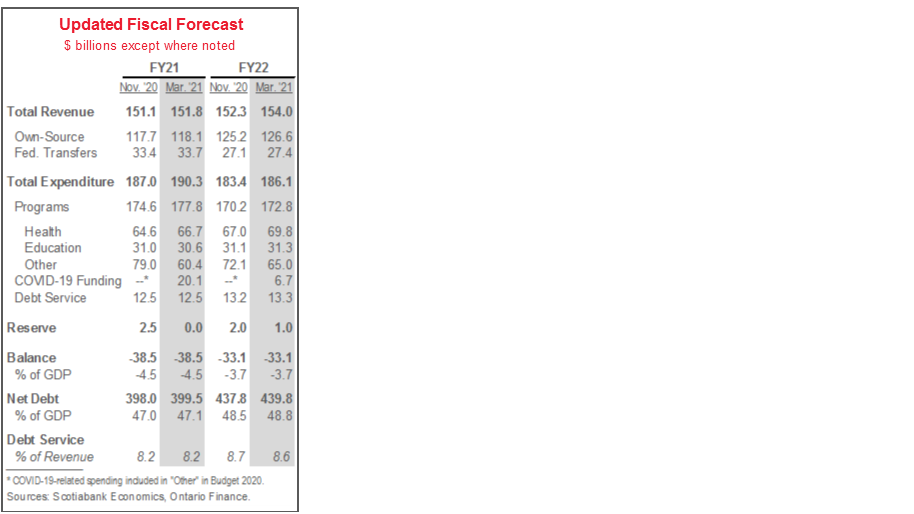