Broadly speaking, the global economy continues to strengthen and remains constructive for commodity pricing gains. COVID-19 vaccination rates are climbing around the world; Canada in particular has seen its pace improve significantly during the last month. Flash purchasing managers’ indices (PMIs)—broad measures of the prevailing economic trend—are at their highest levels since before the pandemic in the US, the UK, and the Eurozone (chart 1), and still elevated in China. While restrictions remain in place and Japan and India are grappling with recent surges in cases, there is a renewed sense of optimism with reopening plans announced in several Western countries.

Against that strengthening backdrop, the past month saw several data releases suggestive of stronger inflation. US core CPI witnessed the strongest y/y gain since 2008 in April, but minutes from the latest FOMC meeting continued to point to dovish policy (read Derek Holt’s analyses here and here). Our April forecast assumes peak US inflation near 3% by end-2021, and that the Fed will delay monetary stimulus withdrawal until 2023. Yet, potential additional fiscal spending signalled by the Biden Administration presents upside risk for the labour market recovery and, by extension, the possibility of a faster tightening schedule.

Bullion climbed into the 1,900 USD/oz range by the end of May—nearly 10% higher than early-April levels—the gain driven primarily by US dollar weakness. The greenback has depreciated in response to inflation fears, the Fed’s continued dovish policy stance, and expectations of accelerating economic growth in much of the rest of the world. Accordingly, the DXY index is down about 3% since late March and net bets against the US currency have been steadily increasing in recent weeks, benefiting USD-priced bullion (chart 2, p.2). Volatility via the recent cryptocurrency selloff also contributed to gold’s desirability as a safe-haven asset.

The generally improving macroeconomic backdrop was at the heart of gains for Brent and WTI this month. Thus far in May, WTI has averaged 65 USD/bbl—the highest monthly mean price since October 2018—and Brent’s mean near 68 USD is the best during the same period. OPEC+’s recent demand forecast update and reports of the strongest US traveller throughput since before the pandemic were auspicious from a fuel consumption perspective. The most significant demand-side wrinkle at this time may be India’s ongoing surge in COVID-19 infections, lockdowns related to which led the IEA to downgrade its consumption projections for the current quarter.

Though crude output is rising in a number of major oil-producing nations, the supply side is also contributing to bullish sentiment. OPEC+ production is set to rise only gradually in line with previously announced targets—though spare capacity remains and ministers from the bloc are scheduled to meet in early June. In the US, a material drawdown in crude reserves leaves inventories below the trailing five-year average and a wide June–July WTI time-spread suggests expectations of tight market balances. The possibility of a new nuclear deal—which would see US sanctions on Iran lifted and could prompt a flood of new Iranian barrels to return to the global crude market—hangs over these developments. Rumours of progress on this front resulted in a short-lived crude price dip this month.

WCS also gained in May, and its differential to WTI widened to average about 13 USD/bbl. Capacity utilization at US Gulf Coast refineries—the top destination of marginal Canadian barrels—has risen towards its 2015–19 average, having plunged to a record low 41% in February at the height of that month’s winter storm (chart 3).

We stated in our last forecast update that copper prices could well reach all-time highs this cycle—that prediction came to pass in early May (chart 4). It was the culmination of more than a year of nearly uninterrupted upward movement related to hefty Chinese industrial activity and tight supply from Latin America. Labour tensions at two large copper mines in Chile add to the latter effect. We expect prices of the bellwether red metal to remain elevated throughout our forecast horizon as a global stimulus-led recovery finds its footing this year, and a broader copper-intensive green transition takes hold over the medium-term. As well, there is little additional production capacity in the pipeline.

Market values for iron ore also reached a new peak in May, having previously done so just last month. A key ingredient in steelmaking, the metal has benefited from the same factors as copper has. Last month, unexpectedly high steel production figures in China drove a surge to north of 230 USD/t; prices have since fallen back below the 200 USD/t mark. We suspect that current levels of speculative activity in the market will ease over the course of this year as Brazilian iron ore output eventually ramps up, curbing price gains over the medium-term.

Although the pace of growth eased last week, lumber prices continue to set new records. The North American Framing Lumber Composite Index breached 1,500 USD/Mfbm in the seven days to April 21, 2021 while WSPF held at 1,630 USD/Mfbm—both marks represented all-time highs. Robust US housing construction has anchored lumber demand, though price growth paused after the last housing starts print reported a modest decline. Yet, a rise in building permits suggests that demand remains healthy, and we anticipate that homebuilding activity will offer further pricing support as the year progresses. Mills continue to report light inventories and limited additional production capacity, both of which should contribute to additional demand-supply tightness.

The US Department of Commerce’s (DoC) proposed tariff rate increase for imports of Canadian softwood lumber is less positive for the industry, but would not take effect until November 2021 if implemented. It is the latest development in the Canada-US softwood lumber dispute that began in the 1980s, and follows the Trump Administration’s retreat from a similar proposal after a Canada-favourable WTO ruling and threats of retaliatory measures late last year. The DoC will likely publish its final duty rate decision in November; the Canadian government has pledged to challenge the proposed duties in the interim. From a fundamentals perspective, we note again that US lumber production is insufficient to meet domestic demand.

Preliminary 2020 estimates of GDP by industry in Canada’s provinces—released in early May—offer new insight into the broader economic impacts of the last year’s commodity price movements. Alberta saw the deepest contraction of any province last year—unsurprising given its status as the capital of Canada’s oil and gas industry—though construction and manufacturing experienced steeper drops. This speaks to oil and gas’s linkages to other industries in the province, which we noted in our last Alberta Provincial Outlook. Saskatchewan also saw spillovers, but was helped by its smaller industrial sector output share plus gains in potash mining and agriculture. Newfoundland and Labrador’s oil and gas sector grew in 2020 as Hebron offshore field output continued to climb, but major project stoppages look to have weighed on other industries (chart 5). 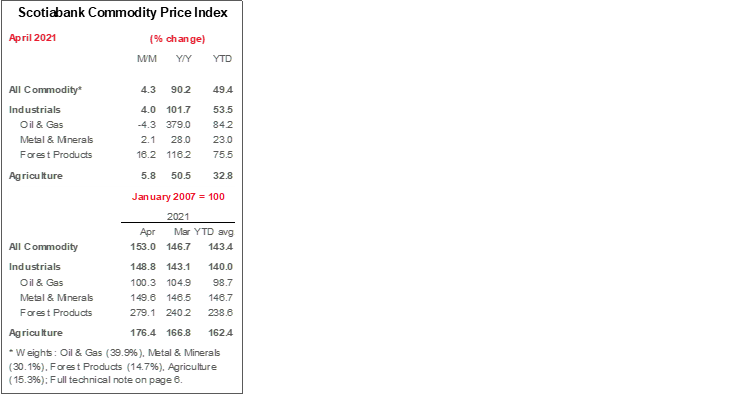 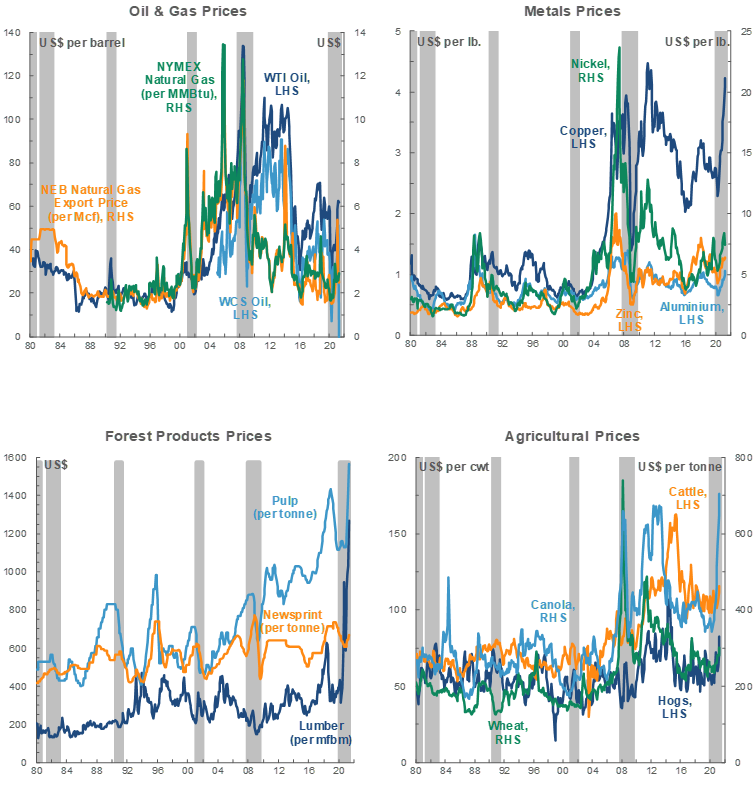