On Tuesday, August 31st, Chile’s statistical agency, INE, released the country’s updated unemployment rate, showing a drop to 8.9% in the quarter ended in July (Bloomberg: 9.2%), as workers returned energetically to the labor market, especially informal workers (chart 1). The drop compared to the previous month reflects a higher growth in employment (1.3%) in relation to that observed in the workforce (0.7%). Employment grew again (+108 thousand), after four consecutive months of falls or null variations. However, the figures show that most of the new jobs are informal (104 thousand) while only four thousand of them correspond to formal jobs. Nonetheless, the increase in employment was the largest since December 2020 (chart 2). It should be remembered that, with the extension of the Universal Emergency Family Income (IFE) until the end of the year, the Government proposed the creation of 500,000 new formal jobs during the remainder of the year.

July’s figures narrow the employment gap against pre-pandemic levels, as these dropped to 914 thousand jobs, of which 476 thousand are formal jobs (52% of the total) and 439 thousand are informal. We believe that a part of the remaining gap will begin to recover (mainly in informal ones), given the fewer restrictions imposed by authorities in recent weeks, due to the drop in COVID-19 cases.

On the other hand, fiscal spending had a new record expansion last month, anticipating strong economic growth for July. According to figures from the Budget Office, total spending expanded 59.7% y/y in real terms in July, its highest increase so far this year, highlighting the growth of current spending (+65.7% y/y) which was partly explained by the implementation of the IFE Universal. All in all, we expect July’s economic activity index (Imacec) to grow 17% y/y (+1.0% m/m).

As Colombia advanced with vaccination rollout, major cities allowed more activities to operate, which was reflected in a monthly creation of 434 thousand jobs, constituting the best rebound since September 2020. That said, up to July total active jobs are down by 1.23 million (-5.5%) relative to July 2019, which pointed to a significant improvement from June´s data, when the lag was 1.9 million people (~8% below pre-pandemic levels). On the other side, the inactive labor force fell by 227 thousand (the best reduction since august 2020) and now is just 8.7% above from pre-pandemic levels. The main contributions came from job creation in main cities, which also contributes to close somewhat gender gaps and improve formality metrics.

From a sectoral perspective, services-related sectors were the best performers amid the almost complete normalization that is taking place, around 52% of yearly employment gains came from commerce (+644 thousand y/y), hotels and restaurants (+447 thousand), and leisure (+426 thousand), those sectors have relevant participation of women labor force, which contributes to close some gender gaps. It is worth noting that employment losses as of July 2021 versus pre-pandemic levels remained concentrated in four sectors: Manufacturing (-281 thousand), especially in the clothing sector; leisure (-264 thousand), and commerce (-205 thousand). We think those gaps will continue closing as regional leaders allow yet more activities such as massive events. Additionally, people returning to the office and schools would lead to better demand dynamics.

1. Female Participation: the wider gap between the female unemployment rate (18.6%) and male rate (10.9%) is narrowing, as the rebound in services sectors and children going back in school are allowing women to participate more in the labor force.

2. Formality: formality is improving, evidenced by the 57% of employment attributable to formal jobs in July, while self-employment contributed with 38%. Informality is also moderating, for urban areas (13 major cities) informality is around 46.3%, while for a wider sample (23 cities) it is 47.5%.

Summing up, July showed an overall recovery in the labor market, showing that now services sectors are leading the gains and are contributing to close somewhat the gender gap and to improve formal jobs. We expect the labor market to continue gradually improving, as major cities are now broadly operating normally. In addition, the vaccine roll-out is now available for children above 12 years which would lead to a better dynamic in the education sector in terms of job creation but also allowing women to return to the labor market. 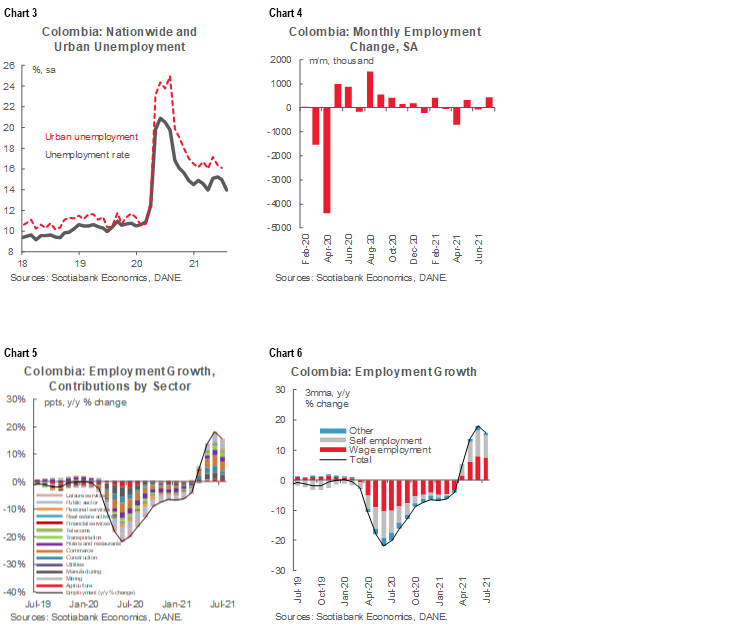 According to data published by the Ministry of Finance and Public Credit (SHCP), in the months from January to July 2021, the public sector balance reported a deficit of MXN -242.67 billion pesos (USD -12.1 million). This deficit was MXN 205.2 billion lower than expected and lower than the MXN -414.64 billion deficit in the same period a year ago as a result of higher revenues but also lower expenditures than programmed. The primary balance recorded a surplus of MXN 132.92 billion (USD 6.6 million), above the deficit of MXN -15.19 billion programmed for this period.

Looking at the details:

In recent days, the president and the finance ministry indicated their intention to use the SDRs that the IMF provided to Mexico’s Central Bank (USD 112.117 billion) in order to pay public debt with high rates and reduce the amount of debt outflows. However, according to the Central Bank Constitutional Law, SDRs are considered part of the international reserves, meaning that in order to make use of them the federal government would have to buy them from Banxico at market prices. More information regarding FinMin and Banxico’s negotiations on this issue will be announced in the coming days, along with the fiscal budget, to be released on September 8th.

Banxico’s latest Quarterly Inflation Report (QIR) released August 31st offers little in terms of new forecasts but does add more clarity into the central bank’s current priorities. Given that Banxico had already made two upward revisions to its inflation forecasts from the May 2021 QIR, and the latest relatively benign print, which saw inflation drop about 20 bps, there were no changes in August. Notably, growth forecasts to 2021 were revised up based on the strong Q2 data. Banxico’s new central scenario envisions 6.2% growth for the year (we expect our own revised forecasts will land quite close to that), while Banxico anticipates 2022 growth at 3.0%.

Banxico’s current inflation forecasts see CPI converging to 20 bps above the midpoint of its 3% +/- 1 pp target by 2022 H2, within the central bank’s policy horizon. Because Banxico also estimates the output gap will be largely closed by the second half of 2022, we are calling for policy settings to move to neutral by the end of next year, at which point Banxico’s own forecasts suggest inflation will be close to target.

The latest estimate of the neutral policy rate we have from Banxico was published a couple of years ago. In it, the central bank suggests neutral policy settings would be consistent with real rates of 1.8-3.4 percent. We can either take the consensus long-run inflation or Banxico’s inflation target to proxy where neutral settings would end up as the economy moves closer to potential, which would mean a neutral nominal rate in the 5.85% to 6.1% range, depending on whether we take long run inflation estimates or Banxico’s inflation target. Our current forecast has Banxico rapidly moving its policy rate to 5.25% (which is still accommodative), followed by gradual tightening throughout 2022, leaving policy settings at neutral by the end of next year, which are consistent with the output gap being close to shut by the end of 2022.

We remain comfortable with our forecast, but acknowledge that communication from Banxico’s board members, alongside the arrival of former FinMin Herrera as Governor (his comments on monetary policy so far suggest he will lean dovish) point towards a skewing of risks towards a slower unwinding of stimulus than we currently expect. However, if tightening falls behind inflation, resulting in lower real policy rates, there is a risk that inflation could become self-sustaining, which suggests a more gradual rate hike path might risk a higher terminal rate.

In terms of the Report’s focus, there is a fair amount of work dedicated to evaluating the impact of the pandemic’s supply chain disruptions on overall economic activity levels as well as prices. Key highlights include:

PERU: THE 2022 BUDGET—STEADY AS SHE GOES

The Ministry of Finance, MEF, released its 2022 fiscal budget plan, public debt program and its yearly multi-annual fiscal policy framework document, Marco Macroeconómico Multanual, MMM, over the last few days. The next step is for the budget to be discussed within the Congressional budget committee. Congress then has to approve the budget by December. If precedent holds, Congress will introduce modifications without materially affecting the basic guidelines of the budget.

The 2022 budget totals PEN/197 bn (approximately USD48 bn) and represents a moderate 7.6% increase over the initial 2021 budget. This will require a PEN/ 38 bn (USD9.5 bn) increase in debt, including PEN/ 30.6 bn (USD7.7 bn) in sovereign bonds issuance. This would be lower than the PEN/ 41.9 bn by which the debt increased in 2021. Frequently, the actual debt requirements surpass the initial budget allowance, although normally not by a huge amount.

According to these documents, the MEF estimates that the 2022 Budget will allow for a decrease in the fiscal deficit from 4.7% of GDP 2021 to 3.7% in 2022. As a result, the public sector debt in 2022 will reach 36.6% of GDP. The MEF was keen on stressing in these documents the government’s intention to meet the fiscal rule long-run target of a 1.0% fiscal deficit by 2025.

The MEF is forecasting 4.8% GDP growth in 2022, which greatly surpasses our own forecast of 2.6%. The greatest difference is not discounting due to confidence issues resulting from policy and political uncertainty.

The two sectors which will see the greatest budget increase are education, 7.9% higher, and health, 5.8%. The Budget includes a 3.2% increase in government spending, in real terms. Public investment will rise 6.7%, in real terms.

What appears to be lacking from the new budget, interestingly enough, is any mention of an increase in taxes on mining, or other tax reform measures. However, this may simply reflect lack of time to structure a proposal for inclusion in this version of the budget. The overriding message is that this is a budget that is reasonable and more prudent than we might have expected. Following COVID-19 and Peru’s lockdown last year, any government would have needed to contend with a certain amount of fiscal deterioration. Outside of the normal concern one may have over this, there is otherwise nothing untoward or exceptional in the 2022 budget. The weight of the MEF as an institution appears clearly in the budget’s design. This is not a budget that is all that different from budgets in the past.