Professional sports may be on an indefinite hiatus due to the COVID-19 pandemic, but furious activity remains on the floor of Scotiabank Arena: preparation of tens of thousands of meals for delivery to frontline hospital workers, non-profits and charities such as shelters and food banks throughout the Greater Toronto Area.

A team of 17 chefs as well as employees from different departments of Maple Leaf Sports and Entertainment, which owns Scotiabank Arena, are working to cook up meals at the venue’s kitchen facilities and package them on the floor beneath the scoreboard, where the Toronto Raptors and Maple Leafs had hoped to be playing at this time of the year.

Loud music is still blaring, but the friendly competition is between staffers on the floor over who can build and package the fresh, ready-to-heat meals with speed and precision, says Chris Zielinski, MLSE’s culinary director, who is overseeing the large-scale catering operation.

“The city gives so much to us over the course of the year,” he said. “It’s times like these where we have a responsibility to give back and do something with the resources we have.”

Scotiabank and Tangerine have teamed up with MLSE, along with other founding partners Bell Canada and Rogers Communications, to support the community outreach effort, which will use kitchen facilities at the arena.

Food rescue organization Second Harvest as well as other local suppliers will be providing fresh ingredients so MLSE chefs can create as many as 10,000 meals a day destined for 14 hospitals and more than 30 non-profits and charities, including food banks, community centres and shelters in the Greater Toronto Area.

In addition, Scotiabank will be leveraging its kitchen facilities at Scotia Plaza in Toronto to further support this initiative.

“We are very proud to be utilizing Scotiabank Arena and the kitchen facilities in Scotia Plaza to feed the most vulnerable members of our community, and care for our frontline health workers as they care for us all,” said Scotiabank President and CEO, Brian Porter. “Our health workers are the embodiment of our highest values and we are all grateful for their service and sacrifice, particularly during this period of acute need.” 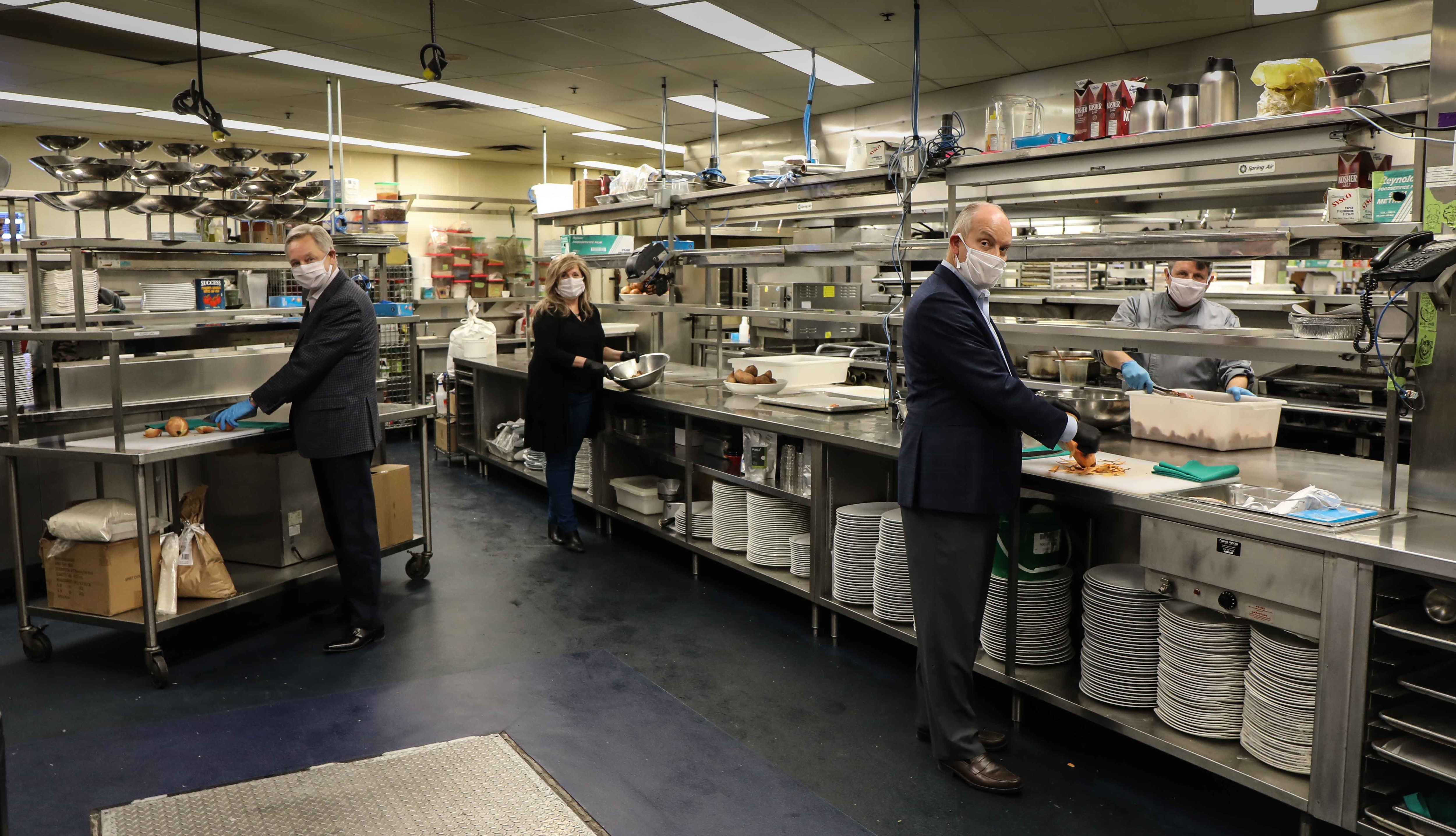 “Scotiabank Arena normally serves as a gathering place for fans to be entertained and cheer on their teams, but today, as the world deals with the overwhelming impact of the COVID-19 pandemic, our arena will serve as a place for people to come together and support our community when it is most in need,” said Michael Friisdahl, President & CEO of MLSE.

“In a time of crisis like we are experiencing, many different needs emerge, and we saw this as a chance to use our facilities and engage our people to serve our community. We are grateful to MLSE’s employees, our teams through the Team Toronto Fund and the Maple Leafs Alumni for their donations and our generous partners for helping answer the call and providing the resources needed to fill an important need at this critical time.”

All physical distancing protocols will be followed during the creation and the delivery of the meals, which will be sealed and labelled. MLSE says it worked with food hygiene experts and Toronto Public Health during the development of the program to ensure the safety of those receiving the meals and the people preparing them.

For example, a kitchen at Scotiabank Arena that would normally have 40 people working in it can now only accommodate eight to keep people the appropriate distance apart, said Zielinski.

On the arena floor, as many as 18 MLSE staffers at a time build and package the meals at individual stations, which are also spaced apart to adhere to social distancing guidelines, he added.

Fresh masks and gloves are used daily, and the entire space is disinfected each day as well, he added.

“The real challenge was just figuring out how to navigate that in a way that we can guarantee the safety of all our employees and make sure that everybody is feeling good about coming to work… I think everybody is feeling great about the fact that we are there contributing to something really positive, especially in a time when the restaurant business has really been upside down.” 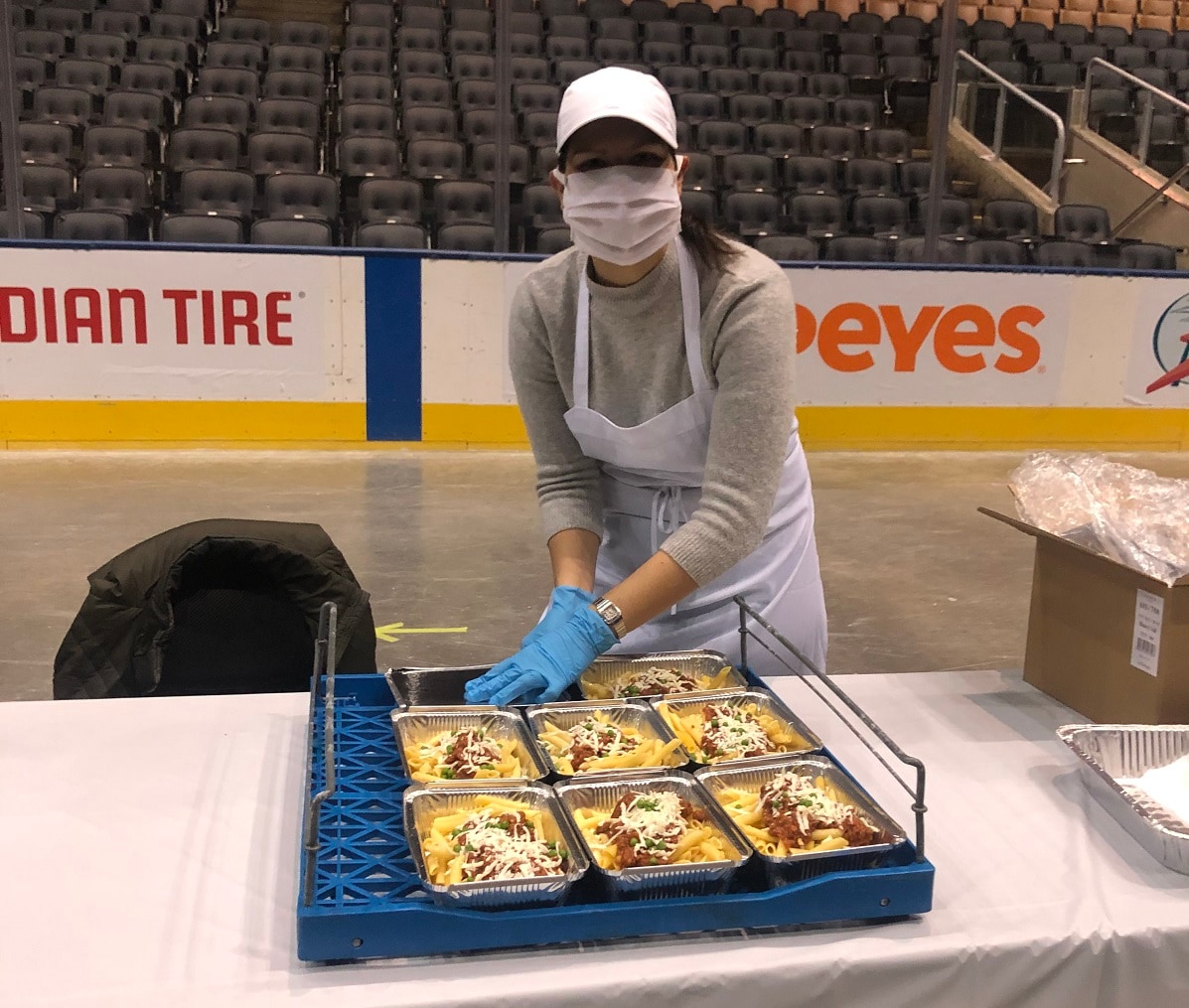 MLSE staff works to assemble individually-packaged meals at Scotiabank Arena, destined for frontline health care workers and for non-profits and charities, such as food banks, via Second Harvest.

“The real challenge was just figuring out how to navigate that in a way that we can guarantee the safety of all our employees and make sure that everybody is feeling good about coming to work… I think everybody is feeling great about the fact that we are there contributing to something really positive, especially in a time when the restaurant business has really been upside down.”

The meals are being delivered to 14 hospitals, including Toronto General, Michael Garron Hospital, Mississauga Hospital and Scarborough General. As well, the initiative will provide meals to more than 30 non-profits and charities, such as food support organizations and shelters that have been hit hard by the pandemic, said Lori Nikkel, chief executive of Second Harvest.

The food rescue charity’s distribution system to support low income and vulnerable communities has had to adjust due to the coronavirus outbreak, she said.

Second Harvest had been providing food ingredients to five kitchens in Toronto that would help train people, and the resulting meals would be distributed to a network of organizations in the city. However, those training kitchens had to be shut down for safety reasons, she said.

As well, the buffet-style food preparation typically used for shelters made it more difficult for people to keep the appropriate distance away from each other, she added.

These meals from the MLSE initiative can be produced safely, and individually packaged, sealed and labelled, and are easy for people to grab and eat while keeping safely away from others, she added.

“With MLSE in this huge facility where they could actually maintain physical distancing while producing 10,000 meals is just a testament to how incredible people are,” she said.

The program will prepare hundreds of thousands of meals over the coming weeks, for delivery five days a week.

Premier of Ontario Doug Ford said he has seen thousands of Ontario businesses and organizations do their part in the fight against COVID-19 to support health care workers and the most vulnerable.

“By providing hot meals to our hard-working frontline workers, their families, and those in need, companies like MLSE, and the many others joining them in this initiative, are showing that the Ontario spirit is shining brightly during these unprecedented times,” he said. “If we look out for one another, we will get through this crisis.”

In addition to this meal initiative, Scotiabank previously earmarked $2.5 million for COVID-19 community response efforts. The donation money will be spread across the Bank’s global footprint in an effort to support populations and communities most at risk during the pandemic.

That includes $1.2 million to be dispersed by regional teams to support local charities, $400,000 to the United Way's COVID-19 response efforts, $150,000 to select academic partners working on related healthcare innovations that can be scaled up quickly, and a $750,000 fund for emerging needs for local charities.

How one winery’s gesture helped lift spirits – and sales

Scotiabank CEO: We are strengthened by our differences