Major financial institutions are joining forces with other global organizations to fight the scourge of child trafficking and exploitation.

The stories are all too common, and all too tragic: Children being trafficked and exploited, their abusers using digital technology to facilitate their crimes. According to a recent New York Times expose, in 2018 technology companies reported 45 million online photos and videos of children being abused around the world, more than double the number the year before. In October 2019, Canadians were among the 338 people charged in an international criminal investigation of a child pornography website that used the digital currency bitcoin for payment. Officials described it as one of the largest child pornography operations ever.

Statistics like these are a sobering reminder that human trafficking and child exploitation are worldwide problems and that Canada is not immune to them.

Stuart Davis, Scotiabank’s Global Head, Financial Crimes Risk Management and Group Chief Anti-Money Laundering Officer, recently joined a select group of NGOs, faith leaders, executives and government representatives at the Vatican to discuss ways to address child exploitation. The meeting, titled Promoting Digital Child Dignity — From Concept to Action, was the result of a commitment by leaders around the world to protect children against modern slavery. The effort was launched in 2017 by the Pontifical Academy of Sciences, an arm’s length entity of the Vatican that provides authoritative opinions on scientific and technological issues.

“This meeting is a culmination of a lot of work and my hope is that it is the ultimate call to action,” says Davis. “We believe the next step is to lay a multi-sector foundation for a standardized approach to combat trafficking and exploitation.”

Among the attendees at the Vatican meeting were representatives from Apple, Microsoft, Amazon and the United Nations. Topics focused on the concept of digital child dignity and on actions being taken by companies and NGOs to make it a reality.

Davis spoke at the meeting about the need for stronger partnerships between private industry and the public sector — and about the successes of some of the collaborations that are already underway. Project Protect, which Davis helped to launch in 2016, is one such initiative. The project is a public-private partnership between the Financial Transactions and Reports Analysis Centre of Canada (FINTRAC), law enforcement and major Canadian banks to detect, deter and stop associated money trails.

In the years since its inception, Project Protect has contributed to a significant increase in the overall number of suspicious activity reports FINTRAC has received from reporting entities across Canada related to suspicion of human trafficking — from 450 in 2015 to 4,200 in 2017. This increase is a direct result of the project’s collective research on refining red flag indicators of human trafficking, such as multiple point-of-sale transactions at motels, hotels and car rental agencies, or financial activity in different cities over a short time span.

In addition to its work investigating and deterring human trafficking, Scotiabank is also helping survivors rebuild their lives. This year, the Bank launched a pilot project in partnership with the Salvation Army’s Deborah’s Gate program in Vancouver to provide financial services to people who have been trafficked. “One of the many ways trafficking harms the lives of survivors is by compromising their financial identities. That’s an area where banks can help get them back on track,” says Davis. Scotiabank has opened two accounts for survivors and has plans to open three more before the end of the year.

The project emerged from a blueprint for mobilizing finance against slavery that was developed by the Liechtenstein Initiative, an international partnership between governments and the private sector. “When organizations come together through public-private partnerships there is a real opportunity to do good and serve the community — not just domestically but globally,” says Davis.

The Vatican meeting was the capstone to a series of speaking engagements on such partnerships that Davis undertook this year. Among the others was the Future of Financial Intelligence Sharing’s Conference of Partnerships, which looks to public-private information sharing to detect, deter and disrupt financial crime, as well as the annual meeting of the Institute of International Finance, which has co-published a paper on the future of financial crime risk management strategies.

Those involved in fighting financial crimes typically focus on anti-money laundering and anti-terrorist financing, Davis says. He believes that focus should be expanded.

“I would like to propose that anti-trafficking and exploitation be added as a third pillar, alongside anti-money laundering and anti-terrorist financing, with just as much attention paid,” he says.

“The human toll of these crimes is staggering,” Mari says. “At Scotiabank we’re committed to giving this issue the attention it deserves and helping survivors in a concrete way.” 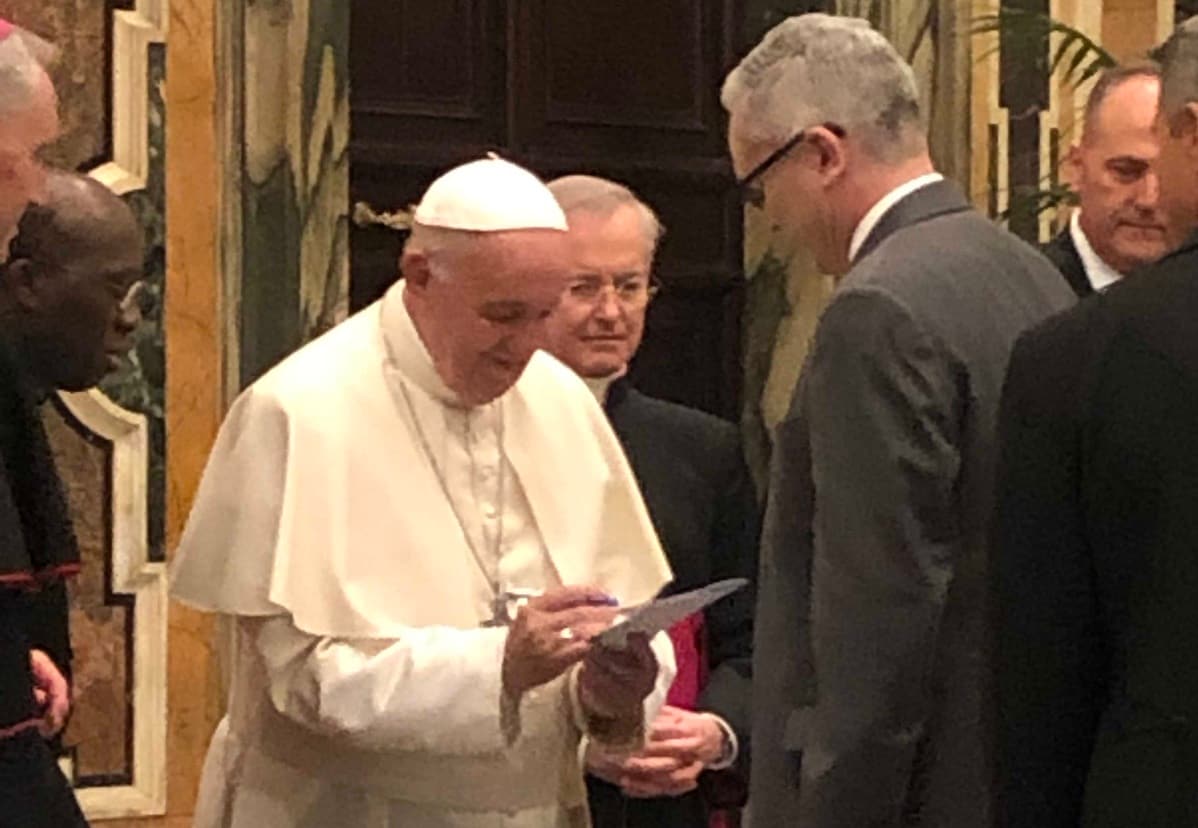 Helping displaced Ukrainians land on their feet in Canada