How hockey can open doors and foster inclusivity for newcomers

Khaled Al Mouktaran first heard about hockey when he and his family arrived in Canada as refugees from Syria. The then-14-year-old was checking into a shelter at a Toronto hotel in March 2016 with his parents and three siblings when the front desk receptionist mentioned the sport.

“I thought hockey was something to do with shoes you run around in,” Al Mouktaran recalls. “Like baseball or badminton or something like that. I never imagined hockey meant having to skate, on metal blades. That was out of my imagination.”

Al Mouktaran could not have foreseen that not only would he learn hockey, but the sport would go on to play a central role in his life, helping him connect with the community in his new home country, build up his confidence and even shape his career path. 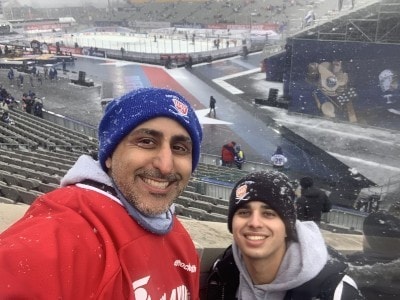 His story is a testament to the power of sport to have a positive impact on those who are able to access it.  Al Mouktaran was given the opportunity to play Canada’s national pastime through Hockey 4 Youth, a charitable organization that helps new Canadians and high-priority youth play the sport.

The Toronto-based organization, which is supported by Scotiabank, provides equipment, free ice time, coaching and other programming. Hockey 4 Youth’s aim is to increase social inclusion, build confidence and teach skills that can help lead to success on and off the ice.

The Bank’s support is part of its hockey for all initiative, which aims to make the sport more diverse, inclusive and accessible.

“Hockey is more than a sport, it has the power to bring people and communities together,” said Laura Curtis Ferrera, Scotiabank's Chief Marketing Officer. “For too long, hockey has been inaccessible to large groups of Canadians, both financially and culturally. Through our hockey for all initiative, Scotiabank is committed to investing in change by supporting organizations such as Hockey 4 Youth and its important mission to make the game more inclusive.”

The initiative also commissioned The Hockey Jersey, a fictional children’s book about a young girl on the day of her first hockey game, net proceeds of which will go to Hockey 4 Youth. The book’s release comes ahead of Scotiabank Hockey Day in Canada — the country’s biggest annual single-day hockey celebration — held in Owen Sound this year and broadcast on Sportsnet.

Al Mouktaran is one of more than 600 children and teens who have been helped since Hockey 4 Youth was created in 2015, said Moezine Hasham, Executive Director and Founder, Hockey 4 Youth. Those participants represent 38 countries of origin, including Syria, Pakistan, Philippines, Mexico, Jamaica and Uganda, where Hasham’s parents immigrated from. 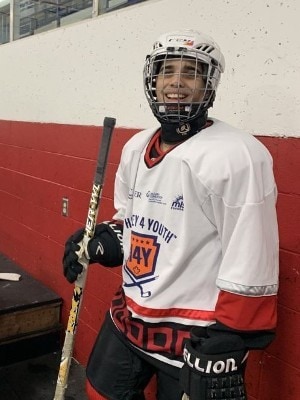 “It's a beautiful game. But we unfortunately haven't provided more safe, inclusive opportunities to kids who can't access it,” he said. “That was the end goal. We're really focused on making sure that we can remove every barrier possible.”

Hasham’s own experience as a young boy in British Columbia sparked the idea for Hockey 4 Youth. One day his neighbour took notice of his enthusiasm for road hockey, urged his parents to sign him up for ice hockey and offered her older son’s old equipment.

“I didn't really understand at that time what the impact was but clearly, for me, hockey was an outlet. It was a way for me to feel like I belonged, to feel socially included,” Hasham said.

Relatively few newcomers have the chance to even try the game, a 2014 report from the Institute for Canadian Citizenship shows. While roughly 71% of new citizens surveyed by the non-profit said they had some interest in hockey, just 1% said they had tried it.

This report and his own experience prompted Hasham, who has years of experience in corporate philanthropy, to start Hockey 4 Youth in 2015. Their slogan is: “the only barrier should be the boards.”

One major barrier is the cost — data shows that it can cost up to $4,000 to play one season of minor-league hockey, Hasham noted.

It's a beautiful game. But we unfortunately haven't provided more safe, inclusive opportunities to kids who can't access it.

“That's a big ask for any family really, but especially if you're new to the country and you're arriving here, from, say, Afghanistan or Syria and you've got nothing. That's a big ask. Then layer on the cultural barriers.”

Hockey 4 Youth began with one program at Marc Garneau Collegiate Institute, a high school in Thorncliffe Park, an area of Toronto where many new Canadians live.

That’s where Coach Moe, as the Hockey 4 Youth participants call him, met Al Mouktaran in 2016. The high school’s physical education lead teacher Paul Hillman — who has worked with Hockey 4 Youth since its inception — urged Al Mouktaran to play the sport, and connected him with Hasham and Hockey 4 Youth, which provided equipment.

At the time, he was still adjusting to his new home country after fleeing the war in Syria.

“That was like probably one of the hardest times in my life. Really just trying to figure out new culture, new food,” he said.

The first time Al Mouktaran put on skates and stepped onto the ice, he recalls falling and getting up over and over again. When he and the other participants wanted to quit, Hockey 4 Youth coaches encouraged them to stick with it. The volunteer coaches held out a hockey stick for them to hold while they were pulled around the rink, and Al Mouktaran was hooked.

Over time, Al Mouktaran improved at hockey and even started helping other newcomers learn to skate and fit them with equipment.

That experience helped him get a job as a rink guard with the City of Toronto, ensuring safety and helping those on the ice during free skate times at various municipal arenas. He later got an opportunity to coach as part of the Hockey In the Neighbourhood program, a collaboration between the City of Toronto and MLSE Foundation, designed to encourage children to participate in the sport.

Helping 35 children between the ages of six to 12 on the ice for the first time was “one of my biggest achievements,” he said. When they got frustrated, he and other coaches pulled them around the rink using a hockey stick, as his coaches had done.

“I really want to introduce these kids, community members, friends, family to a fun game,” he said. “It’s a good way to give back, to feel included in the community, to connect. It’s good for your mental health and to be out there and stay active.”

His involvement with the City of Toronto led to his current role as a social worker. When COVID hit, leisure activities such as indoor skating were cancelled, but there was increased demand for staff in the city’s shelters. Al Mouktaran started as a volunteer but was later hired on to help at shelters like the one his family lived in upon arrival.

“It was always something that I wanted to do. To go back and help the same way I was helped and maybe bring something new to the table,” Al Mouktaran said.

It’s the kind of connection to community and development of resiliency that Hockey 4 Youth aims to foster, says Hasham. A survey of participants found 80% feel socially included after participating, while 94%  feel better about their mental, emotional and physical health, and 87% say they have built relationships with their peers, volunteers, coaches and other staff, he said.

“It allows us to invest in these kids. It allows them to access the game that we consider our national pastime. That positive impact on these young people is going to pay dividends in the future. They’re going to feel more connected to their new country. That’s how you grow the game.”