These past 12 or so months have been good to Deanna Bowen. The Montreal-based interdisciplinary artist, who has spent more than 20 years figuring out how to articulate her experience of being Black in Canada, received more than one affirmation of the importance of her work: The Scotiabank Photography Award — Canada’s most prestigious, peer-nominated and reviewed photography award — on top of the Governor General’s Award in Visual and Media Arts.

“By the time I got the Governor General’s Award last year, I was doing a deep critique of Canadian culture and policy, so I was amazed. I was very pointedly going after Vincent Massey, who was chairman of the National Gallery of Canada and laid the groundwork for the Canada Council for the Arts, and then I got the award,” Bowen said in an interview with Perspectives.

“Making political art is not a Canadian norm, which makes it even more special to be recognized on a federal level, from a jury of my peers, and among a cohort of predominantly racialized artists,” she added.

This month, Bowen received the 2021 Scotiabank Photography Award for outstanding contribution to contemporary art and photography by mid- to late-career artists. “This win gives me the platform to be bigger in a place that really is all about shrinking things down and provides the opportunity to reach out to an international community, make connections with Black artists around the world,” Bowen said. “That’s a big factor in my efforts to help rewrite Canadian cultural history.” 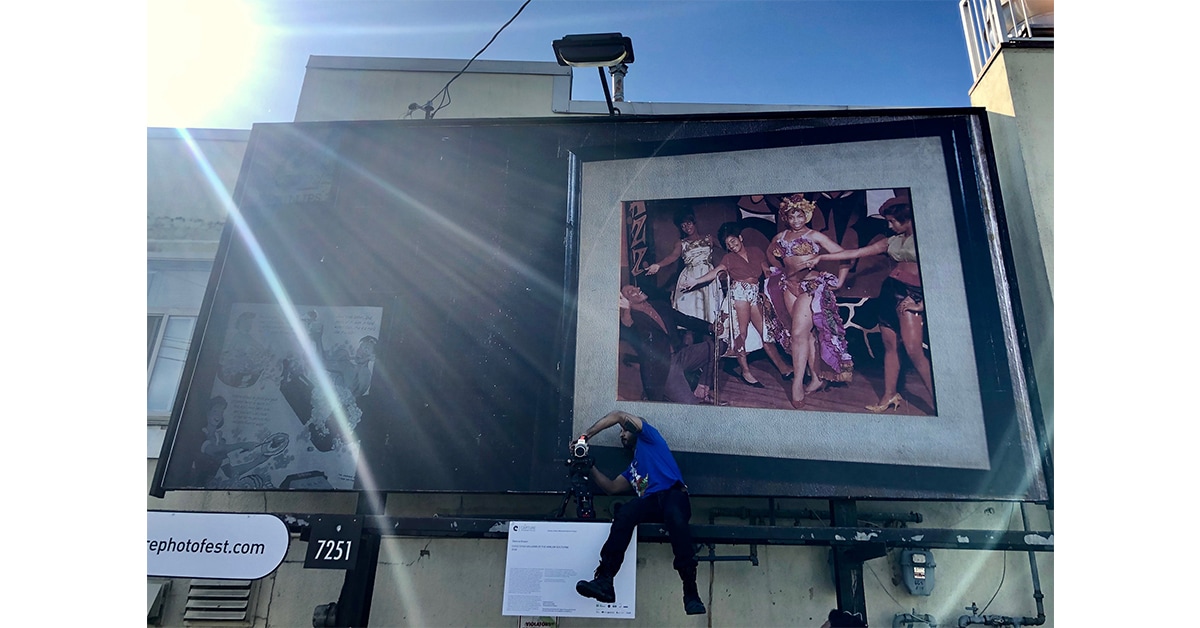 “We’re incredibly proud to recognize Deanna Bowen as this year’s winner of The Scotiabank Photography Award,” says Laura Curtis Ferrera, Chief Marketing Officer, Scotiabank. “Deanna’s art tells an important story about our country and its history by deepening our understanding of her world. For over a decade, Scotiabank has played a role in celebrating the creative vision and accomplishments of our country’s most gifted photographers and we’re happy to name Deanna as one of them.”

The award co-founded by Scotiabank and Canadian photographer Edward Burtynsky comes with a $50,000 cash prize, a solo Primary Exhibition during the 2022 Scotiabank CONTACT Photography Festival at the Ryerson Image Centre, and a book of her work published and distributed worldwide by German publisher Steidl. The finalists — Annie MacDonell of Toronto, Dawit L. Petros of Montreal, and Greg Staats of Toronto/Six Nations of the Grand River Territory, Ont. — will each receive $10,000. This year’s jurors were: Burtynsky, Jury chair; Sophie Hackett, curator for photography at the Art Gallery of Ontario; Dr. Kenneth Montague, art collector and curator; and Brian Sholis, editor, writer and curator.

Bowen, who has a Master of Visual Studies from the Daniels Faculty at the University of Toronto, is a recipient of a 2018 Canada Council Research and Creation Grant, an Ontario Arts Council Media Arts Grant in 2017, a 2016 John Simon Guggenheim Memorial Foundation Fellowship, and the 2014 William H. Johnson Prize. Her writing, interviews and artworks have been published in Canadian Art and other publications, and she is editor of the 2019 publication Other Places: Reflections on Media Arts in Canada. She is represented by MKG127 Gallery.

Bowen, a descendant of Alabama and Kentucky Black pioneer families who made their way to Amber Valley and Campsie, Alta., said that essentially she has made a career out of talking about her family, which she has traced to enslaved people in the pre-Civil War American South, and its connections to Vancouver’s Hogan’s Alley and Black Strathcona. Her 2017 video, We Are From Nicodemus, blends art and documentary to tell the story of African American migration to the Canadian Prairies through her family. Her work over the years has evolved from documentary video into a complex mapping of power drawn from her research in public and private archives.

The seeds of Bowen’s current work were sown when her research led her to documents about the arrival in Edmonton of the first group of Black freemen from Oklahoma, and the subsequent signing of a petition by the Edmonton Board of Trade and city businessmen urging Prime Minister Wilfrid Laurier to discourage African Americans from homesteading. Laurier obliged, signing an Order-in-Council prohibiting Black homesteaders.

“The many letters that were generated to support the petition insisted white people were getting agitated, and if the Canadian government didn’t intervene, they would resort to lynch mobs,” Bowen said, pointing to a history of hostility Canadians know little about.

The petition was the impetus for her to create work around the migration of segregation laws and the Ku Klux Klan to Canada. It was while installing one of these pieces in 2017 that a name on the petition — Barker Fairley — caught the eye of an installer. English-born Fairley was a well-known art and German literature scholar, a professor and a strong advocate for the Group of Seven landscape painters.

Since then, Bowen said her work has been shaped by one question: What does Fairley’s signature on the petition mean for Canada’s cultural identity and for the Group of Seven artists and their works? Her most recent work, Black Drones in the Hive, which was on display at Kitchener-Waterloo Art Gallery, juxtaposes the history of a very real, very rich, Black community comprised of former slaves from the United States that existed up until the 1920s, with the Group of Seven and the artists’ connection to the Kitchener-Waterloo region. 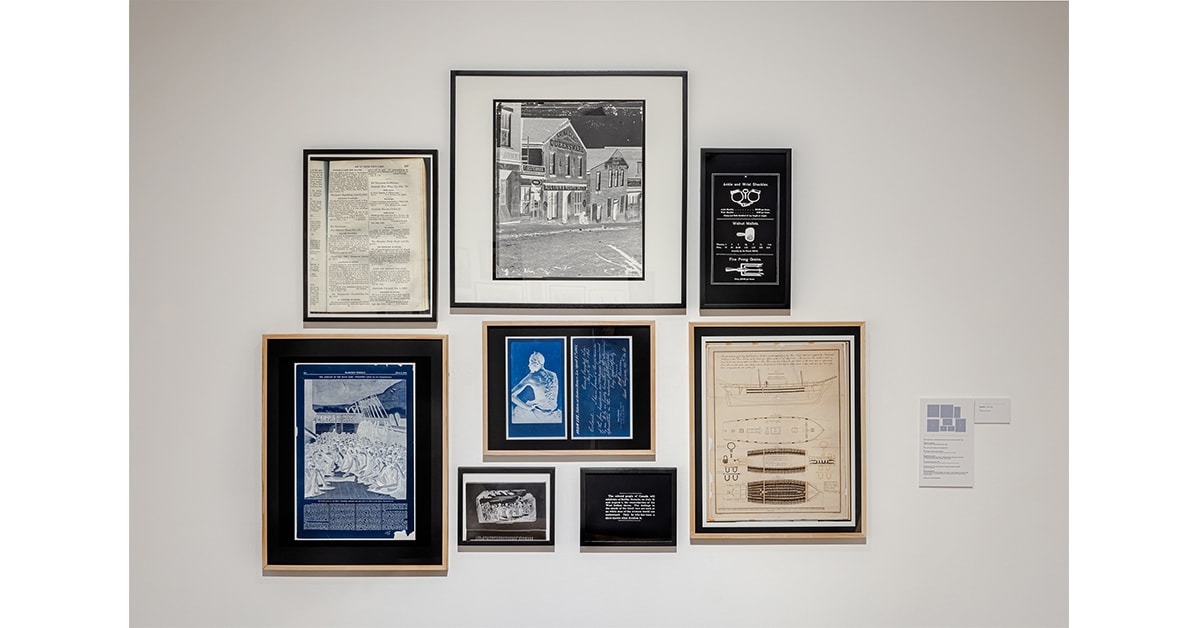 “It puts that history in conversation with the Group of Seven artists and their paintings, examining how the absence of people perpetuates the romantic colonial imagination of this vast unpeopled landscape that was ripe for exploitation when in fact the work I do illustrates just how deeply populated and diverse it was,” Bowen explained.

Bowen’s next project will create a similar installation of images and documents around the facade of the National Gallery with additional research into the early, foundational years of the gallery as it relates to British Empire. “We forget Queen Victoria’s children opened the National Gallery and we forget that relationship between Empire and Canada,” Bowen said.

Digging through the past is painful work, Bowen acknowledged, but there are also blessings. One is being able to work with colleagues such as Crystal Mowry, who is senior curator for Black Drones in the Hive. Mowry nominated Bowen for the Scotiabank Photography Award, which Bowen contends is a celebration of them both.

“I couldn’t possibly have made my most recent work without her. Having a Black curator to work through the very difficult parts of Canadian history and the erasure of Black bodies with is quite profound. It was life changing for the both of us,” she said.

“To get the Scotiabank Photography Award for something that goes so deeply against the grain is mindboggling, but I guess it’s the times, the political upheaval on the rise of right-wing nationalism around the world. I’m thankful for the jury for acknowledging the difficulty of that labour, because it’s deeply traumatizing,” Bowen said.