Orange Shirt Day and the road to reconciliation

The most alarming aspect of the system was that its target and its victims were the most vulnerable of society: little children. Removed from their families and home communities, seven generations of Aboriginal children were denied their identity through a systematic and concerted effort to extinguish their culture, language, and spirit.

Before he joined Scotiabank, Jon Davey worked closely with survivors of residential schools as a Crown lawyer. This put him in a difficult yet ultimately rewarding position.

In his current role, he is not only responsible for forging new business relationships with Indigenous people and helping them explore economic opportunities. Davey is also continuing to build understanding between the Bank and Indigenous communities and helping employees understand and embrace the part they play in the reconciliation process.

“Discussions about the intergenerational trauma caused by the residential school system are incredibly important because Canadians need to know what happened at these schools in order to make sincere efforts towards reconciliation with Indigenous peoples,” Davey says.

Canada ran residential schools for Indigenous children for well over a century, with the last one closing as recently as 1996. Some 150,000 children went through the schools. From early on, children as young as four or five were taken from their parents and communities, against their will, and brought to the schools, often at great distances from their homes.

One of the primary goals of the schools was to erase the culture, language and beliefs of Canada’s Indigenous people and force them to assimilate into the dominant Western culture.

The schools were also rife with sexual and physical abuse. Thousands of people recounted their residential school experiences to the Truth and Reconciliation Commission, and many told similar stories of abuse and neglect.

The harm done to those who attended the schools had a lasting impact not only on them, but on their families and communities for generations to come.

“That any Indigenous person survived the culturally crushing experience of the schools is a testament to their resilience, and to the determination of those members of their families and communities who struggled to maintain and pass on to them what remained of their diminishing languages and traditions,” Justice Murray Sinclair, Chair of the Commission, wrote in his final report.

“As each generation passed through the doorways of the schools, the ability to pass on those languages and traditions was systematically undermined.  The schools and Canada’s overall treatment of its Indigenous peoples have seriously affected Indigenous pride and self-respect, and have caused individuals and communities to lose their capacity to cope with the daily tasks of living. The evidence of that is seen in the serious social conditions that Canada’s Indigenous people face.”

Orange Shirt Day was named for the story of Phyllis (Jack) Webstad, who lived on the Dog Creek reserve in British Columbia when she was sent to residential school in 1973. On her first day at the school, the new orange shirt her grandmother had given her was taken away. It is a symbol of the harm to children’s self-esteem and well-being that the schools represented.

Among the events that Scotiabank is holding to mark the day is the opening of its third Downie-Wenjack Legacy Space (pictured above), located in a Yellowknife branch (the other two are in Toronto). These spaces are a safe, welcoming place to provide education and awareness about the residential school system as well as Indigenous cultures, histories and traditions for people to discuss the journey of reconciliation.

The Legacy Spaces Program was started by the Downie-Wenjack Fund, which was created to embody the commitment of the late lead singer of The Tragically Hip, Gord Downie, to help improve the lives of Indigenous peoples. 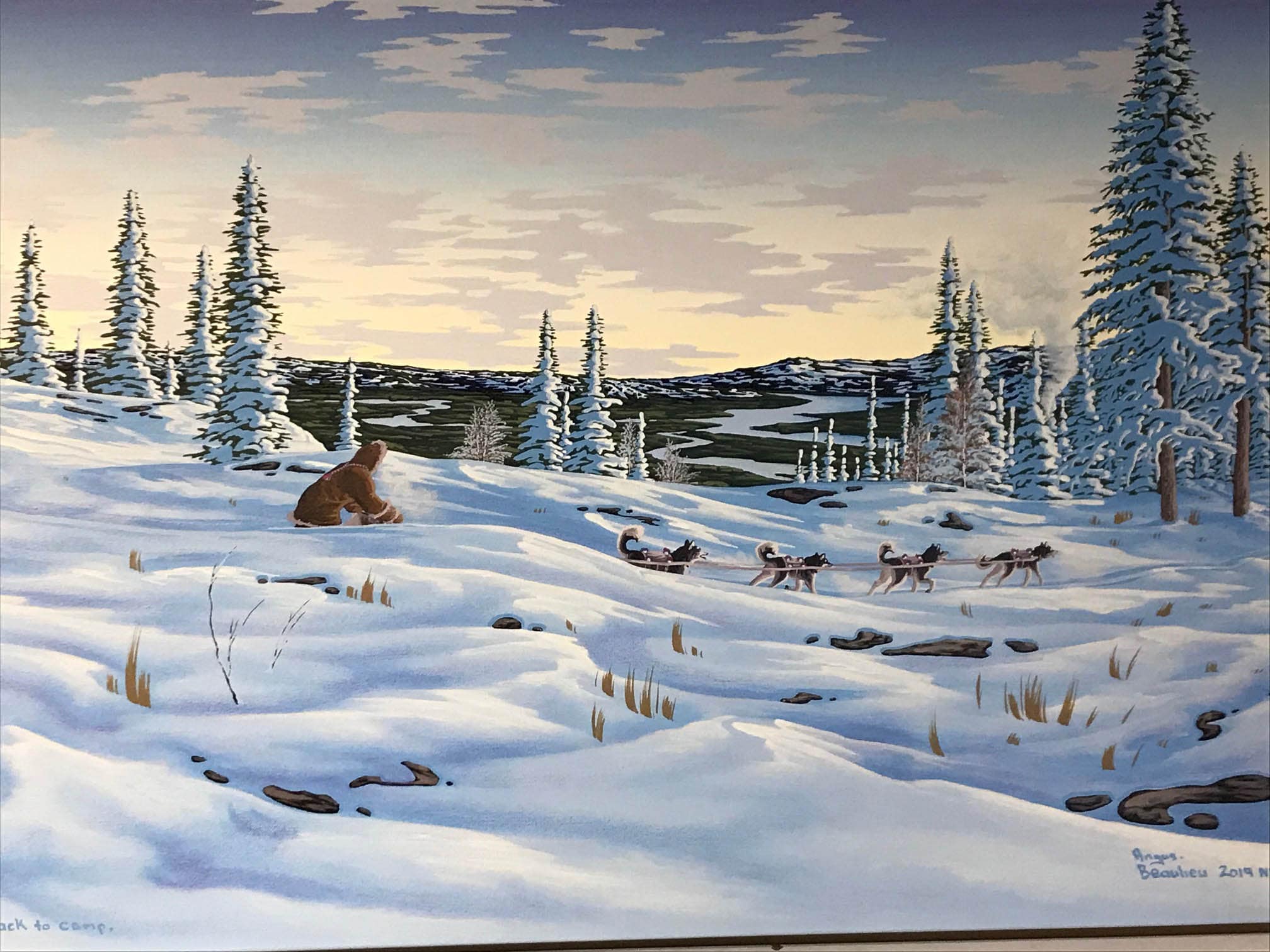 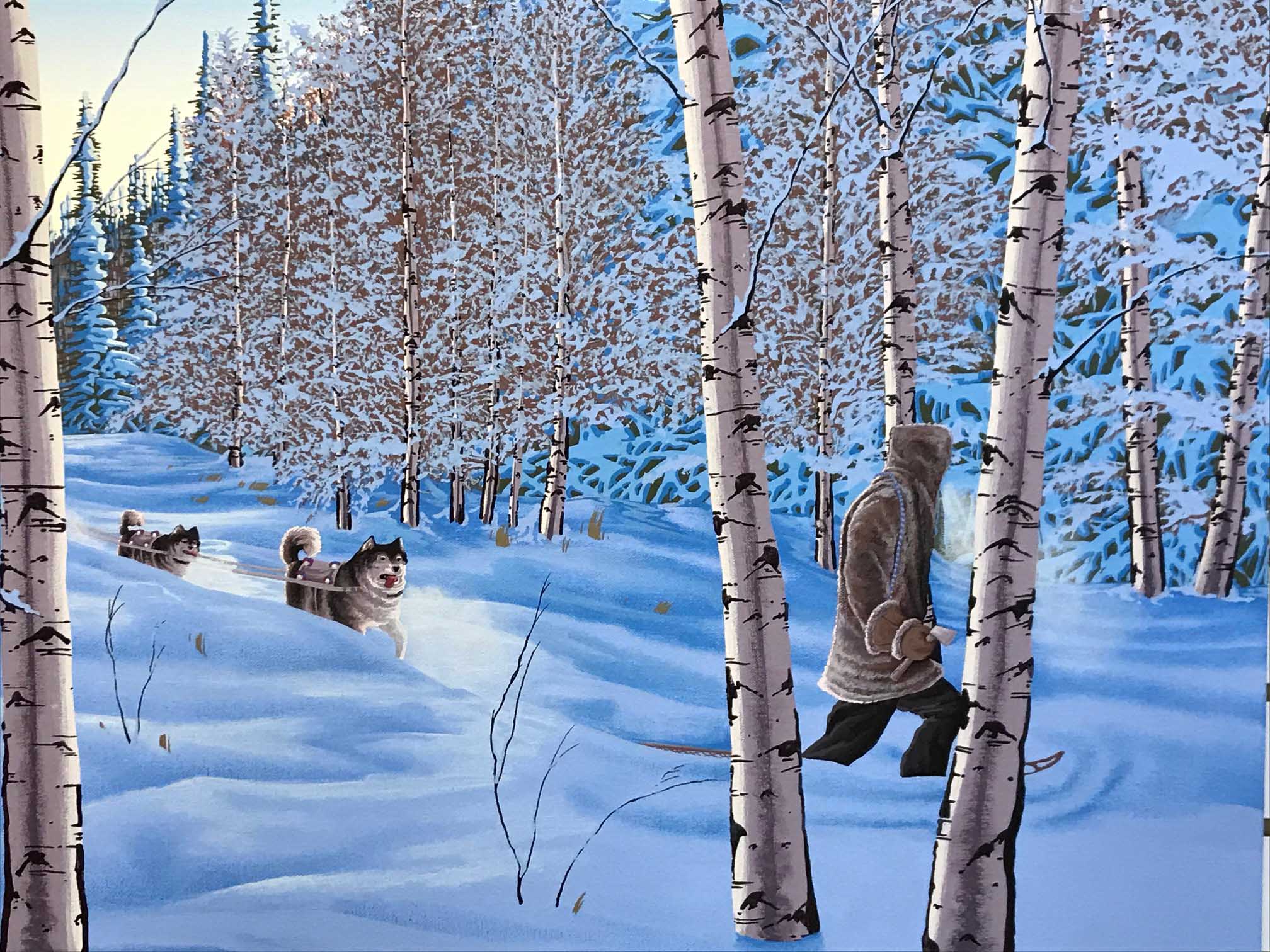 Acrylic paintings [Top: 'Back to Camp', Bottom: 'Making Trail'] by Angus Beaulieu, a Canadian Aboriginal artist from the community of Behchoko displayed at Yellowknife Legacy Room. Beaulieu’s artwork depicts the wildlife and spectacular beauty of the north, while reflecting traditional Tłı̨chǫ culture and beliefs.

Downie was inspired by the story of Chanie Wenjack, an Anishinaabe boy who was sent to a residential school in Kenora, Ont., in 1963, at the age of nine. When he was 12, Chanie and nine other children fled the school in an attempt to reunite with their families. The other nine were caught the same day. Chanie’s body was found a week later. He had died of starvation and exposure.

Downie wrote a series of poems inspired by Chanie’s story, which later became the songs on his record The Secret Path. He approached artist Jeff Lemire to bring the story to life in a graphic novel of the same name.

“No one should ever have their culture and innocence taken from them and the fact that residential school students were stripped of both in such a horrible and demeaning manner is truly horrific,” Davey said. “The residential school system has created a lot of intergenerational trauma because all the survivors have had to live with what’s happened to them, with little acknowledgement of the systemic abuse they were forced to endure.”

On Orange Shirt Day, Scotiabank aims to honour those survivors, and play its part in furthering the process of reconciliation.

“Honouring survivors and advancing reconciliation requires us to make good on the Truth and Reconciliation Commission’s 2015 Calls to Action,” said Brett House, Vice President and Deputy Chief Economist at Scotiabank, and Executive Champion of the Bank’s Indigenous Employee Resource Group. “For Scotiabankers, this includes concerted work to end unconscious bias and eliminate discriminatory barriers so that Indigenous Canadians, communities and nations have equitable access to the Bank’s full suite of employment opportunities and financial services.”

Click here to read about Scotiabank’s $600,000 donation to Indspire, Canada’s largest Indigenous-led and Indigenous-focused charity. Scotiabank’s donation will focus on financial and culturally relevant teaching, and access to networking, coaching and mentoring, in order to increase economic sustainability and prosperity and ensure a smooth transition into post-secondary education and the work force.

Scotiabank commits $1.25 million to the Institute of Sustainable Finance