A Case Study of Scotiabank

The financial sector since its inception has been domi­nated by men. Reflecting the social and economic reali­ties of the time, Scotiabank was founded in the nineteenth century by men of vision who held to a strict hierarchical order, starting with juniors (boys of fifteen and a half years old) and progressing through teller and accountant to manager. Executive positions were not attainable to the rank and file, as the president and directors were usually wealthy, well-connected business­men.

Women did not figure into the equation at all until banks and other financial institutions started to expand, necessitating more support staff at Head Office. "Type-writers" were added as a function and were almost always women. By virtue of women's initial minuscule numbers and very specialized skills, and in accordance with the social mores of the late nineteenth and early twentieth century, the advancement of women was not considered a factor by the Staff Department of the Bank of Nova Scotia. The bank's "Manual of Rules and Procedure" focused on character, basic decorum, penman-ship, and behaviour deemed appropriate to one's station and to the bank's position in the community.

These are all issues that the social historian would expect to find at the core of a large and far-flung operation with a relatively small staff, which included a preponderance of young trainees often living far from their homes. As with church, army, and government postings, young bankers were moved to suit the needs of Head Office.

Contrary to popular twentieth-century opinion, perhaps, women did not dominate the ranks of tellers even after the influx of women to the financial sector (and to all white-collar occupations) during the First World War. Indeed, they continued to dominate only in the growing secretarial, stenographic, and administrative jobs in the Head Office in Halifax and the General Office in Toronto. Typical staff photographs from branches at the time continued to show a lone woman, the manager's secretary. 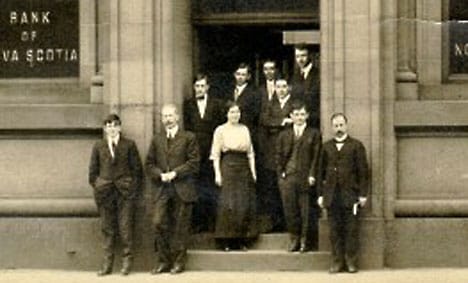 The Second World War saw a tremendous increase in the number of women staff members in the branch system. By 1944, fully 60 per cent of Scotiabank staff were women. The role of women in the war effort has been well documented elsewhere, but it should be noted that women bank staff sold Victory Bonds and War Savings Certificates. Following the war, women stayed on in their new jobs in far greater numbers than after the First World War. Specifically, at Scotiabank while fewer than one hundred women were employed as tellers in the bank's Canadian branches prior to the war, in 1953 there were over five hundred women tellers across Canada.

Scotiabank was the first Canadian bank to appoint women branch managers. In 1961 Gladys Marcellus of Ottawa and Shirley Giles of Toronto were appointed, setting an important precedent for women. Both were acutely aware of their roles as pioneers; as Shirley Giles commented, "I really feel that I have to make good. I have to work at it because it seems like all eyes are on me." 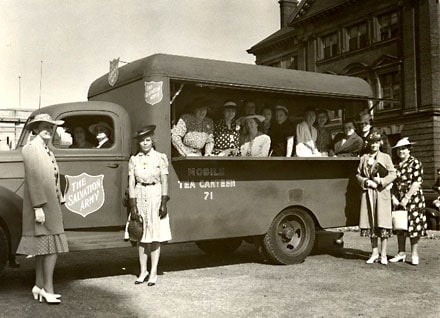 By 1961, as well, 56 per cent of Scotiabank staff were women. Women's advancement in the company soon became a public issue for the bank. The Report of the Royal Commission on the Status of Women (1970) highlighted that Canadian banks, because of their hierarchical and ultra-conservative structure, were ill-equipped to deal quickly and effectively with the inequity of women remaining in junior positions and being under-represented in the different sectors of banking. Scotiabank inaugurated its Women's Pension Fund in 1967 (and would in 1973 amalgamate it into the Officers' Pension Fund, one of the first pension funds in North America), but this was only a small first step.

Of more significance, perhaps, were the appointments from the early 1940s of women economists. At a time when few bankers had more than a high school education, the bank's need for statistical research led to the hiring of university-educated staff to positions of influence. In Scotiabank's case, Dr Lucy Ingram Morgan joined the bank's Statistic Department in 1942, rising to head the highly respected and renowned Economics Department in 1958. Morgan was the first woman supervisor in Scotiabank. She was eventually joined by Betty Ratz King Hearn, a brilliant protégé of Harold Innis's at the University of Toronto, whose lucidly written "Monthly Reports" were distributed to staff and customers across the country and are still standard references. Betty Hearn's range of interests and abilities led to her running the bank's library, well known as an excellent business library. From that base, she launched the Scotiabank Archives, the first bank archives in Canada. The 1950s also saw the hiring of Jocelyn Classy as founding editor of Scotiabanker, the bank's staff magazine.

By the early 1970s, Scotiabank was hiring a small but significant number of women in increasingly complex specialist positions. One of these, Helen Sinclair, went on to be executive director of the Canadian Bankers Association. The state was thus set for the bank to examine the hindrances barring women's advancement and to explore ways to help promote a greater number of women to higher positions.

In July of 1993, Scotiabank president Peter Godsoe appointed a special independent task force to find out why so few women held upper management positions (77 per cent of bank staff were women, but only 6.97 per cent had reached positions of upper management) and to determine how to improve this situation. Barbara Mason, head of the task force, stated: "The advancement of women is really about equality of opportunity. The task force is aiming to remove the barriers that have made it difficult for women to even be considered for advancement - historical attitudes, entrenched personal values and beliefs, and structural processes. Nearly ten thousand Scotiabankers received a confidential survey asking for their perceptions, attitudes, and suggestions on the issue of women in banking. Based on the findings, the task force advanced and implemented a number of recommendations, including an increased focus on ensuring that advancement was based on merit and on finding better ways of communicating job opportunities and measuring skills.

In 2004, the Bank renewed its commitment to women by re-launching the 1993 initiative with the goal in mind of improving the representation of women in senior leadership positions at Scotiabank, to ensure that a culture that values and builds a diverse pool of employees with the broadest range of skills, knowledge and talent was created. The steering committee, which was known as the Advancement of Women (AoW), set out to “level the playing field” and provide women with the best chance possible to grow and succeed as Scotiabankers. To achieve this goal, Scotiabank began to offer more opportunities for women such as mentoring programs, networks, career advancement processes, as well as external presence and opportunities.

By 2007, Scotiabank, who made excellent progress in the representation of which women in senior management positions, won the prestigious Catalyst Award for its accomplishments through the Advancement of Women (AoW) initiative, indicating the Bank’s leadership in this area from both a customer and employee perspective. Scotiabank was the first Canadian company since 1999 to receive this honour and its then President and Chief Executive Officer, Rick Waugh, was appointed to the Board of Directors for Catalyst Inc.

In 2010, it was announced that Sylvia Chrominska, then Scotiabank’s Group Head, Global Human Resources & Communications, had been named an inaugural recipient of the Catalyst Canada Honours in the category of Human Resources/Diversity Leader for her contribution in advancing women within and beyond the workplace.

Today and going forward, AoW continues to be a priority for Scotiabank. In particular, the Bank plans on take AoW global to ensure that all Scotiabank employees around the world benefit from what has been learned to date. Women’s networks, mentoring partnerships and other grassroots projects have already been established in many of the countries where the Bank operates. One such initiative is the collection of new toiletries to support The Woodgreen Foundation Homeward Bound Program, a holistic 4-year job readiness program that brings together the key supports to help under-housed or homeless single mothers earn college diplomas, start careers, and achieve economic self-sufficiency for themselves and their children. Due to programs such as these, Scotiabank has become one of the most recognized companies around the world for its outstanding initiatives resulting in the advancement of women in the workplace. 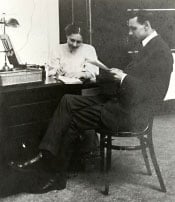 Learn more about the detailed history of women's progress in Scotiabank.