Today, April 29, in a split decision, the Board of Colombia’s central bank (BanRep) increased the monetary policy rate 100 bps to 6.0% (chart 1), as expected by market consensus and Scotiabank Economics. Four board members voted for the 100 bps hike, while three members wanted a more hawkish stance, voting for a 150 bps hike. Despite the split decision, the Board is unanimous in its intention to normalize monetary policy. BanRep’s staff again increased its GDP growth forecast for 2022, this time from 4.7% to 5.0%. The communique was unusually short, though it recognized the high uncertainty with respect to inflation. 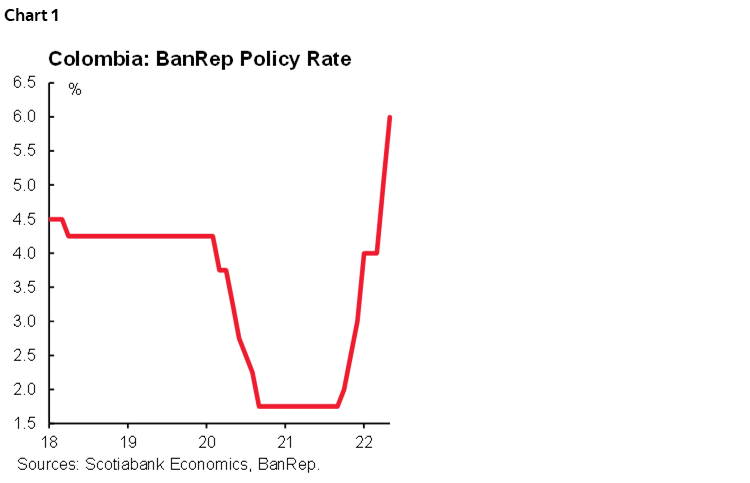 Key features of the decision include:

As expected, BanRep hiked 100 bps, with one more Board member joining the hawkish side. Looking ahead, it will be important to monitor the balance of opinion for future meetings; in this regard, the Minutes will provide further details about the discussion and the arguments cited in support of different positions.

For now, we keep our call of further 100 bps hikes in each of the next two meetings, leading to a terminal rate of 8% for this tightening cycle. This projection is subject to inflation developments, however, and the staff's updated macroeconomic scenario, which will be released on Monday, May 2. This scenario will be key to assessing possible changes to the terminal rate. The press conference with the staff will be on Wednesday, May 4.

Latam Flash: Mexico—Another 75 bps… Was It the Last One of this Magnitude?