Central banks around the world are grappling with the inflationary consequences of pandemic-fighting measures, excess demand and the war in Ukraine. The fight against inflation and the impact of the conflict on input prices and supply chains may come at a heavy economic cost in countries where growth will slow sharply as inflation rises. Balancing these economic costs against the need for inflation control is no easy task. A challenge faced by all central banks, however, is that each can do relatively little to slow inflation that results from global developments. We believe a large part of the strength of inflation can be linked to what was effectively a globally coordinated fiscal boost to protect economies against the worst of the pandemic’s economic and financial impacts. While normalization of monetary policy will in time reduce inflationary pressures in Canada and elsewhere, the Bank of Canada is also fighting the lagged and ongoing impact of fiscal support measures. Given this, the output losses that the BoC must engineer to rein in inflation are falling disproportionately on the private sector. In effect, high levels of fiscal expenditures are necessitating a crowding out of private spending. A less supportive fiscal policy would take some adjustment burden away from the private sector, but also have a much more immediate impact on inflation. Doing so would allow the Bank of Canada, and central banks elsewhere, to reduce the total amount of rate increases required and shift the burden of adjustment from being entirely borne by the private sector to one that is more equitably split between the private and public sectors. It seems clear to us that a more coordinated approach to managing the inflation shock is necessary and desirable.

MORE COORDINATION OF FISCAL AND MONETARY POLICY IN CANADA

“Finally, recognizing the limits of monetary policy, the Government and the Bank also acknowledge their joint responsibility for achieving the inflation target and promoting maximum sustainable employment.” Joint Statement of the Government of Canada and the Bank of Canada on the Renewal of the Monetary Policy Framework, December 13, 2021.

As reiterated in the Bank of Canada’s renewed inflation control mandate, achieving the 2% target is a joint responsibility between the government and the Bank of Canada. At present, the Bank of Canada is shouldering the burden of reducing exceptionally high inflation on its own even though it is clear that much of the increase in inflation since the pandemic stems from fiscal policies in Canada (and elsewhere) that were designed to protect firms and households from the economic impacts of the pandemic. It is fair to say that fiscal policy authorities in Canada are doing nothing of any significance to slow inflation at the moment. A few provinces are putting in place measures to help offset some of the financial pressure of high inflation for households, but those measures put more upward pressure on inflation rather than less.

Lower government spending on goods and services could help lower inflation. In our macro model, a fall of Canadian government expenditures in goods and services decreases the output gap and, therefore, inflation. Consequently, the Bank of Canada would need to tighten its policy rates by less to achieve the same path of inflation if governments persistently reduce their consumption expenditures (chart 1). It is thus possible to shift some of the burden of adjustment away from the private sector and onto the government with better coordination between monetary and fiscal authorities. 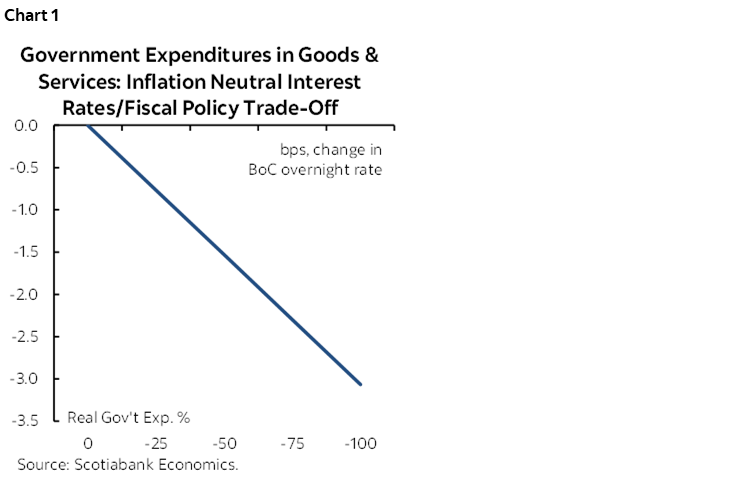 To illustrate this, we use our model to estimate how much government consumption would need to moderate in order to limit the increase in interest rates to 2.25% while achieving the same inflation path as our current forecast. There is no magic to 2.25%. We merely use this as a point estimate to illustrate the potential impact of a different policy mix. Our current forecast predicts the Bank of Canada raises its policy rate to 3.00% by the end of this year.  Furthermore, our forecast assumes a cumulative increase in real government consumption of  4.8% through 2024. In and of itself, this assumes a reasonably low pace of increase in government spending relative to the post-2015 period. Our analysis suggests that a more moderate cumulative increase of 2.5% in real government spending through 2024 would allow the Bank of Canada to end its tightening cycle with a policy rate of 2.25%.

This coordinated approach would have significant impacts on the composition of growth going forward, that would result in higher private demand and lower government demand. This of course, would be a very desirable outcome. The impacts are laid out in chart 2, which calculates the impact on key components of GDP from reductions in the policy rate associated with various levels of cuts in government spending. For instance, in the fight against inflation, a 2.3% reduction in government consumption is equivalent to a 75bps reduction in the peak policy rate. The associated positive impacts on consumption, business investment and residential investment are clear. Moreover, this shift in the composition increases potential GDP (the economy’s natural speed limit) while also limiting, but not eliminating the correction in house prices associated with higher interest rates. Finally, the lower path for interest rates would put some downward pressure on the Canadian dollar, boosting our exports. 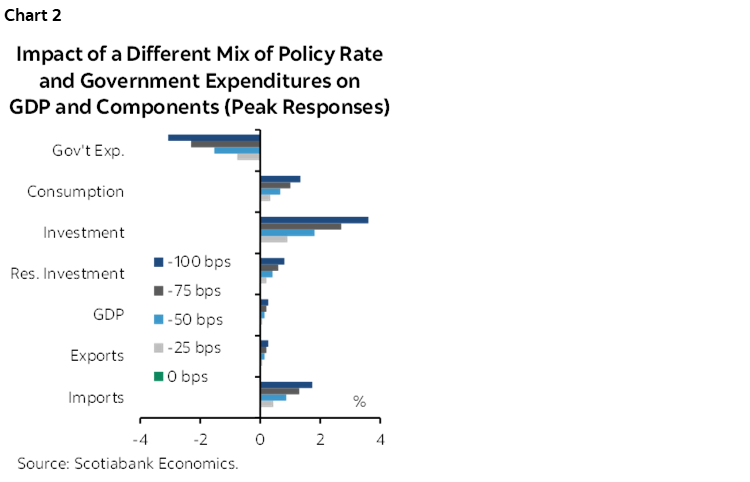 An alternative approach would be for the government to reduce transfers instead of its spending on goods and services. This may be appealing in that a large component of the government stimulus behind the global surge in inflation was composed of direct transfers to firms and households. However, the impact on GDP of transfers is about a third of what it is for direct government expenditures as much of the transfer is saved. A helpful feature of this approach is that it increases the equilibrium labour force participation rate, which also raises potential output. As appealing as this approach may seem, it hardly seems possible that governments would entertain this given the direction taken by some to provide direct financial assistance to households to help them manage the impact of inflation.

There are a number of important caveats to this analysis. Governments always juggle multiple priorities. We know that identifying areas to cut expenditure is politically challenging. We also know that cuts in government spending ultimately find their way into the private sector. Moreover, many types of government spending are critically important to the economy and our growth potential. These include spending on childcare and education, which have unquestionably positive impacts on our growth potential if done effectively and efficiently. We would not advocate a slash and burn approach but careful and targeted reductions in spending. The simple reality is that firms and households are going to be making trade-offs as they incorporate higher inflation and financing costs in their budgets. It seems unreasonable for governments not to do the same and in so doing reduce the adjustment required by the private sector.

The Bank of Canada should not be fighting inflation on its own, despite its explicit inflation control mandate. Better coordination of monetary and fiscal policies in Canada could lead to a return of inflation to target with less impact on the private sector. It is hard to see how this wouldn’t be a desirable outcome.