Core Inflation at the Bank of Canada: Should We Get Back to Basics?

The COVID-19 pandemic which took Canada by storm in early 2020 has had an impact on all facets of the Canadian economy. It spurred unprecedented public health measures leading to the largest fall in economic activity and employment on record. It also drew a formidable fiscal and monetary response aimed at supporting Canadian households and businesses through the pandemic.

Focusing on monetary policy, the BoC’s large monetary stimulus in the form of Quantitative Easing (QE) and forward guidance was ultimately linked to the goal of helping inflation to sustainably reach the 2.0% target. The magnitude of the stimulus thus hinged on the understanding and accurate forecasts of inflation dynamics in the “fog-of-war” atmosphere of a public health emergency.

In general, to understand the evolution of consumer prices the Bank of Canada uses a number of measures of underlying, or “core” inflation. These series aim to capture broad movements in prices by excluding much of the inevitable month-to-month transitory volatility.1 Core inflation series based on trimmed-mean (CPI-trim), weighted-median (CPI-median) and common component (CPI-common) were officially introduced in the inflation target renewal for 2017−21.2 Other measures of core inflation are also available and were used in the past such as the CPI excluding food and energy and CPI excluding food, energy and the effect of indirect taxes. Which of these series has been the best at capturing the underlying inflationary trend? In other words, which measure is more likely to produce an accurate forecast for total CPI inflation—the focus of the Bank of Canada’s inflation-control framework? Also, which of these measures are best forecasted by a Phillips Curve framework? These are the questions we address in this report.

We start by estimating the relationship between core and total inflation and economic fundamentals using a standard modelling framework. Once estimated, the model can be used to forecast total and core inflation and we can compare the accuracy of the forecasts across specifications.

Table 1 shows the equations that link the y/y % change in core inflation to measures of economic slack and other economic fundamentals,3 or the so-called augmented Phillips Curve (APC). The central feature of the APC is its forward-looking nature, as shown by the inclusion of a two-quarter lead in core inflation, motivated by price rigidities that force businesses to also consider expected price changes when setting prices. It also includes cost-push and demand-pull drivers of inflation.

The equations in table 1 are estimated by Bayesian methods in a fully-specified general equilibrium model that links together economic fundamentals, total and core inflation, and the setting of monetary policy through the so-called Taylor rule. This technique allows us to use model-consistent expectations of core inflation in estimating the equations—the main benefit of this approach.

Six versions of the model are estimated for each of the core inflation series we consider including: three of the BoC’s preferred measures (CPI-trim, CPI-median and CPI-common); their simple arithmetic average; CPI excluding food, energy and the effect of indirect taxes; as well as the average of the latter and the CPI-common.

Table 1 shows the coefficients in the Augmented Phillips Curve for each estimated model. Although they are relatively similar across models, there are a few notable differences. First, the BoC’s preferred measures of core inflation show significant difference in persistence as shown by the weight on the lag of the particular core inflation measure, which is highest for CPI-common at 0.67, while CPI excluding food, energy and the effect of indirect taxes has the lowest at 0.57.

Second, economic fundamentals have a significant impact on all measures of core inflation, but the impact is strongest on the CPIXFET and CPI-trim: the coefficients on the two-quarter lag of the output gap (the difference between the level of GDP and its long-run potential) are above 0.03, compared to less than 0.02 for the CPI-common. Finally, the coefficients on the unit labour cost, which measures the cost of labour needed to produce a unit of GDP, are highest for the BoC’s preferred measures of core. The unit labour cost captures the cost-push inflation coming from the labour market, in contrast to the demand-pull dimension captured by the output gap.

For each core measure we also estimated a bridge equation linking it to total CPI inflation (see table 2), which includes a lag of total CPI, core inflation, the real price of oil and the output gap. The weight on core inflation is between 0.42 and 0.46 in all cases, which shows that core inflation measures are significantly correlated with total CPI, as expected.

The equations in tables 1 and 2 will serve as the basis for the simulations shown in the next section, helping us to determine which measures of core are most useful as signals of the underlying inflationary pressures.

Focusing on six measures of core inflation described in the previous section, we evaluate whether a core inflation measure is a good proxy for fundamental inflation using the following two criteria:

i) Is the Augmented Phillips Curve a good framework to forecast a particular core inflation measure?

For our assessment we use the models estimated in the previous section to run dynamic simulations in which core and total CPI inflation are jointly forecast over history.

Table 3 shows the root mean squared errors associated with the forecast of the six measures of core inflation over different forecasting periods.4 Over the 2003–2020 period, results show that the Augmented Phillips Curve framework is useful in forecasting the CPI-Common measure and the average of the BoC cores but performs relatively poorly in forecasting CPIXFET (see charts 1–6). The remaining core inflation series are somewhere in between these two cases. 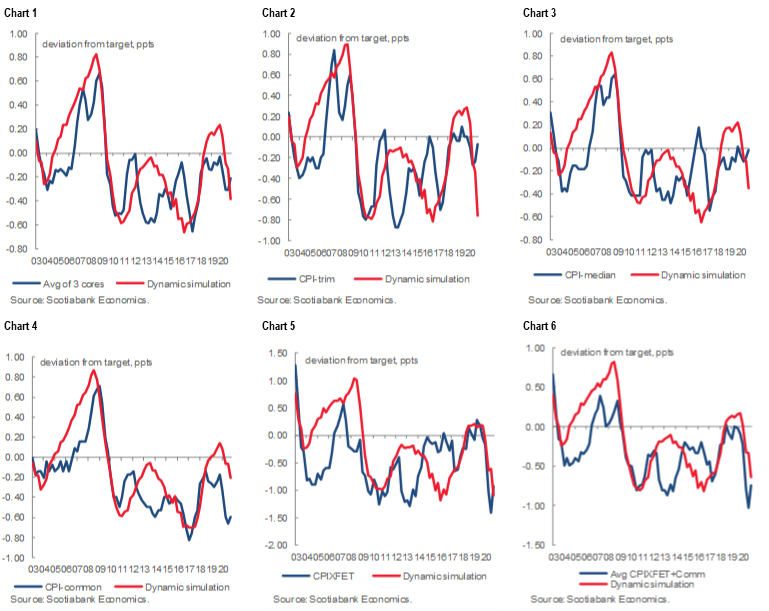 Since the introduction by the Bank of Canada of the 3 new core measures (i.e., CPI-Trim, CPI-Median and CPI-Common) in 2017, the situation changed significantly. In fact, since 2017, and particularly during the ongoing pandemic, the Augmented Phillips Curve produced more accurate forecasts of CPIXFET compared to forecasts of all the other measures of core inflation, including the CPI-common.

Table 4 shows the accuracy of the forecast for total CPI using various core inflation measures and other determinants (chart 7). Over the 2003–2020 period the forecasting performance of the six core-inflation-based equations is only slightly better than that of a constant 2% forecast. All of the six core measures perform similarly over the 2003–2020 period, but since 2017, and particularly during the pandemic, CPIXFET is a clear winner.5 Over this period, CPIXFET is substantially better at forecasting total CPI than all the other measures of core inflation or a simple 2% inflation forecast. This is in large part because of the good fit for CPIXFET of the Augmented Phillips Curve over that period.

Not only is CPI excluding food, energy and indirect taxes at least as good at forecasting total inflation overall—the target of the Canadian central bank—and significantly better since 2017, but it is also more intuitive, well forecasted by the Phillips Curve framework and easier to communicate and analyze by markets. The black-box-like quality of the Bank of Canada’s CPI-trim and CPI-median leaves them opaque and difficult to explain.

In terms of modelling, from now on in the Scotiabank Macroeconomic Model we will use CPIXFET to anchor the forecast of total CPI (combined with the price of oil and the output gap). We will also introduce the mean of the CPIXFET and the CPI-Common inflation rates in the reaction function of the Bank of Canada. Up until now we were using the average of the CPI-Common, CPI-Trim and CPI-Median inflation.

3 The choice of y/y % growth in core inflation is forced by the fact that only this form is publicly available for the BoC’s preferred core measures. This constraint limits our ability to decompose the fluctuation of core measures into underlying monthly price changes.

5 It is worth noting that an equation that anchors the forecast of total CPI on CPI excluding food, energy and the effect of indirect taxes gives better results than a Phillips Curve applied directly on total CPI. This conclusion shows that the core inflation concept is useful to forecast total CPI.