Canadian home sales rose by 0.9% (sa m/m) in September, the first increase in 6 months. Listings moved in the opposite direction, falling by 1.6% (sa m/m). This increased the sales-to-new listings ratio, an indicator of how tight the market is, to 75.1%, up from 73.2% in August, and much higher than its long-term average of 54.5%. As a result, the composite MLS Home Price Index (HPI) rose by 1.7% (sa m/m)—almost double August’s gain. Two-story single-family homes and apartments were the main drivers of this price-gain acceleration in September.

There was a fairly even split between markets where sales increased and where they decreased. Of the 31 local markets we monitor, sales went up in 18, led by St. Catharines and St. John’s—both increasing by almost 20% (sa m/m). These were only partly offset by declines in Charlottetown (-14% sa m/m) and Fraser Valley (-9% sa m/m). September’s national level of sales is historically strong—the second highest on record for September after September 2020, and 27% (sa) higher than the 2000–2019 September-average.

A decrease in listings alongside an increase in sales added to the market’s tightness. The decline in national listings occurred in 19 of the 31 local markets. This increased the sales-to-new listings ratio, putting 22 of our local centres in sellers’ market territory, up from 17 in August. Months of inventory fell in September to 2.1 months—better than their lowest level on record in March 2021 of 1.8 months, but still much lower than their long-term average of 5 months.

Two-story single-family homes and apartments led the acceleration in price gains. The two segments saw price gains accelerating by around 1 percentage point: the MLS HPI for two-story homes increased by 2.1% (sa m/m) and by 1.3% (sa m/m) for apartments, compared to a 1% (sa m/m) and 0.4% (sa m/m) rise in August, respectively. This is perhaps a sign of the concentration of preferences at the two opposing ends of the market; a preference for larger units that are relatively scarce and, therefore, more competitive, which drives their prices up, and apartments that are now the only viable options for those priced out of larger units and seeing an uptick in demand. On the whole, the growth in composite MLS HPI for all homes in Canada was 21.5% (nsa y/y) in September 2021 compared to the same month last year—roughly in line with August’s year-over-year increase, and down from the largest year-over-year increase on record in June of 24.7% (nsa y/y).

Sales have, as expected, ticked up in September, the first monthly increase since March—even after you strip out the seasonal trend that captures the usual increase that occurs in this month every year. Canada’s housing market typically returns from summer break and resumes activity after the Labour Day weekend—a seasonal trend that has been exacerbated by the COVID pandemic. After months of lockdowns, Canadians were sure not to miss the opportunity to enjoy a double-vaccinated, travel-permitted, summer, rather than spend it viewing houses for which they likely will enter a not-so-fun bidding-war, which they have also been increasingly likely to lose! This likely meant a larger exodus over the summer and return in September relative to pre-COVID years, resulting in the post-seasonal-adjustment increase.

The September pick-up is also backed by fundamentals, including improved labour market conditions, where September’s employment returned to pre-pandemic levels, and increased immigration. The latter is partly an outcome of the Canadian government doubling down on its efforts to meet its target of 401,000 new immigrants for the year—as of August, it had achieved 55% of that goal. A return to in-class learning also played a role, at least by way of increasing the demand of investors who are looking to rent to international students. We don’t yet have September data to investigate an investor-specific pick-up in the month’s demand, but data from Equifax showed that as of the second quarter of this year, the number of people with more than 4 mortgages has increased by 7.7% compared to the same time last year—a sign of increased investor activity.

Another possible factor behind the beyond-seasonal increase in September sales is lower borrowing rates. Banks lowered their fixed mortgage rates in September after government bond yields slid over the summer amid fears of a slowing global economic recovery due to the delta variant and persistent supply bottlenecks. Since the end of September, however, persistent upward pressure on inflation brought forward the expectations of policy rate increases, leading to higher government bond yields and banks increasing their rates again. Whether the increase in fixed mortgage rates in October will slow sales during the month is debatable, given the increased share of new variable-rate mortgages over the past year, reaching a record 51% in July 2021. Variable rates today are lower since they are tied to the Bank of Canada’s policy rate, which remains at its effective lower bound, unlike fixed rates that are tied to government bond yields. When bond yields go up, while the Bank of Canada holds its policy rate steady, the spread between the two rates increases. This higher spread partly explains the shift to these variable-rate mortgages. However, it could also be due to the lower penalties on breaking a variable-rate mortgage. In times of heightened uncertainty, such as a global pandemic where, for example, changing work conditions may allow or require you to move locations, caution in accounting for, and protecting against, a possible change-of-plans is warranted.

Having said that, the seasonally adjusted increase in September sales is still quite a modest one, and in-line with expectations of a stabilising market characterised by less dramatic swings from month to month. If that is true, however, the market is stabilizing at a significantly elevated level—one that keeps many want-to-be homeowners at arm’s length. To make matters worse, listings fell in September, which made the market tighter and led to an acceleration in price gains.

Next month will bring fresh data that will help us better asses whether the market is stabilizing or picking up steam in response to improving economic and demographic fundamentals. We will also have more insight on whether the shift to variable-rate mortgages is muting the effect of rising bond yields in slowing borrowing activity. With inflationary pressures proving more persistent, the likelihood of multiple rate-hikes by the Bank of Canada next year is increasing, which would lead to higher variable rates.

And, finally, can’t close without saying, supply supply supply, we need more of it! And until then, supply-demand imbalances will likely continue to support prices. 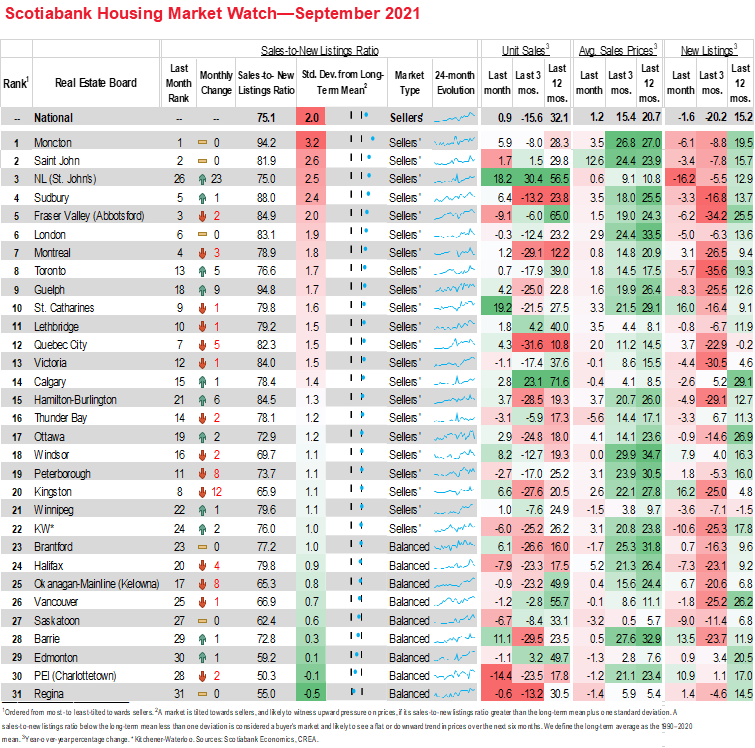 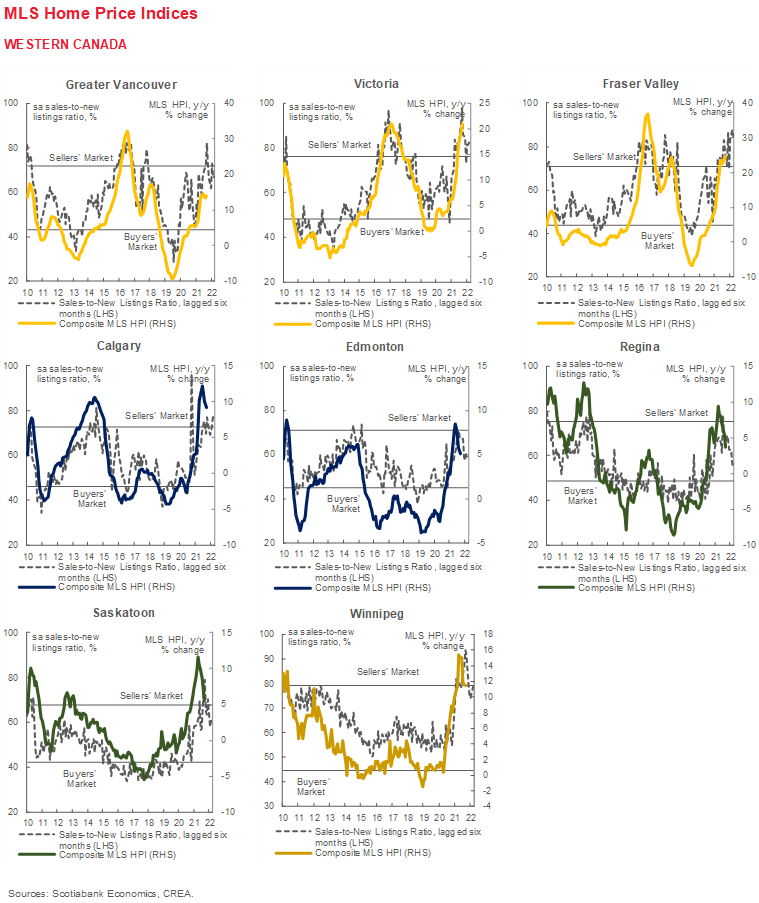 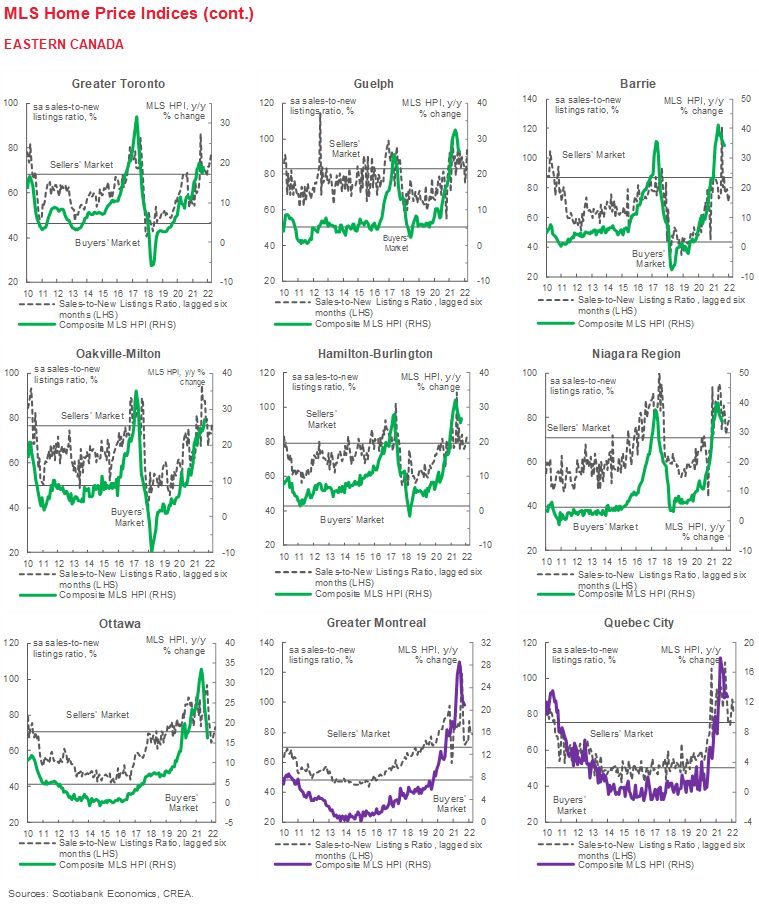