Canadian home sales fell by 12.6% (sa m/m) in April, while listings dropped 2.2% (sa m/m). The sharp decline in sales eased the sales-to-new listings ratio, an indicator of how tight the market is, to 66.5%, its lowest level since June 2020. This easing in conditions brought about a decline in the composite MLS Home Price Index (HPI), which edged down 0.6% (sa m/m) in April compared to March. This is the first monthly fall since April 2020. Most of the declines were seen in markets in Ontario, led by larger detached homes.

The decline in sales was broad based, led by the Greater Toronto Area. Of the 31 local markets we track, 24 registered falling sales, with most large markets registering declines in double-digits. While the national level of sales in April was down compared to the same month last year, it is still the second highest level on record for that month, and is 23% (sa) higher than the 2000–2019 April-average.

On the other hand, there was a fairly even split between markets where listings rose and those where they fell. The significantly smaller pullback in listings put 16 of our local centres in balanced market territory, and pushed Toronto and Barrie, which led the drop in sales, into buyers’ market territory. Months of inventory continued to climb up from its record lows, reaching 2.2 months in April—still far below its long-term average of 5 months, but the highest it has been since summer 2020.

All home-types registered monthly price declines in April, except for apartments, which still registered a small price gain. Two-storey family homes led the fall in prices (-1.6% sa m/m), followed by one-storey family homes (-1% sa m/m) and townhouses (-0.9% sa m/m). On the whole, the composite MLS HPI for all homes in Canada was 23.7% (nsa y/y) higher in April 2022 compared to the same month last year, a marked slowdown from the record setting year-over-year increase in February 2022 of 29%.

Home sales continued to normalize in April, a largely expected deviation from the typical direction of the spring housing market as activity has been pulled forward by rising interest rates and shifts in sentiment and attitude. April’s drop puts sales and the supply-demand tightness indicator at their lowest level since the summer of 2020. This cooling is making its way into prices, with the housing price index registering its first monthly decline since the early days of the pandemic. The fall is concentrated in the Greater Toronto Area, particularly larger detached homes in the suburbs.

The market is largely responding to the Bank of Canada rate hikes, with increased interest rate sensitivity and expectations of even more hikes to come accelerating their effectiveness.

The low-for-long rate environment that far preceded the pandemic contributed to some Canadians’ long-founded belief that rates will never go up. As the Bank began its hiking cycle early this year, with April’s 50 bps hike being the biggest one-time increase since 2000, it had many of the sceptics listening. So the slowing that we’re seeing is not only a reflection of what the Bank has done so far, but also a reflection of what market participants now expect the Bank to do in the future, with many expecting more of these 50 bps hikes throughout the year and markets pricing in a strong increase in long-term rates. This is causing a rapid adjustment to fixed mortgage rates, which are benchmarked to government bond yields, with variable rates on the rise as well in line with the Bank of Canada rate.

These hikes are also having an outsized impact on sales and prices given households’ higher sensitivity to increased borrowing costs. During the pandemic, households accumulated liabilities, particularly in the form of mortgage debt, at very low interest rates, which kept debt-servicing ratios below long-term averages. But these ratios have been rising and are expected to continue to rise as accumulated loans renew at higher rates, particularly as rising food and gas prices increasingly take a bigger share of households’ incomes. The Bank of Canada consumer expectations survey shows that wages of the majority of respondents have not kept up with inflation. As a result, it is becoming harder for some consumers to make their debt payments.

We are definitely at a point of heightened uncertainty, largely driven by the war in Ukraine and its impacts on already strained supply chains and inflationary pressures, which are necessitating aggressive monetary tightening and adding to fears of recession in various regions. The IMF World Uncertainty Index has increased sharply in the first quarter of 2022, with the war-related uncertainty accounting for almost 40% of the global total. While the uncertainty was initially higher in European countries, the gap across regions is narrowing over time. This is exacerbating the housing-specific uncertainty in Canada, with increases in borrowing rates and volatile swings in sales activity occurring in a market that is quite elevated and overheated. No wonder then that many are holding off until some of the fog clears and as the impact of the war and rising rates on the economy and the housing market become more clear. This wait-and-see approach is evident through responses to the Scotiabank Housing Poll in April 2022, which show that more than half of younger Canadians (56%) have put their home buying plans on hold due to the current economic environment and interest rates outlook.

Sellers are having to adjust to the shifting attitudes and dynamics, particularly those who bought before selling. They are now forced to accept offers below what the past two years led them to expect, or offers that contain conditions such as inspections. With largely aggressive asking prices and bids just two months ago, home appraisals on some of the conditional offers are pulling prices down closer to market values.

With Toronto and the GTA leading the declines in sales and prices, data from the Toronto Regional Real Estate Board show that declines in the 905 area code are more pronounced, particularly for detached and townhome segments, which have inflated the most throughout the pandemic. This is likely a signal of the return of the downtown core as many companies return to working from office and as rising gas prices make the commute less affordable, in addition to those regions losing their affordability advantage. 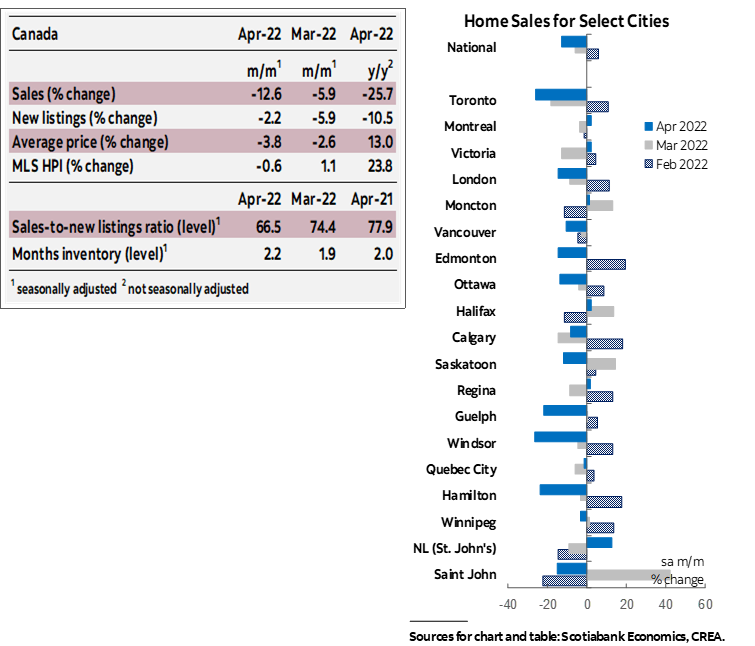 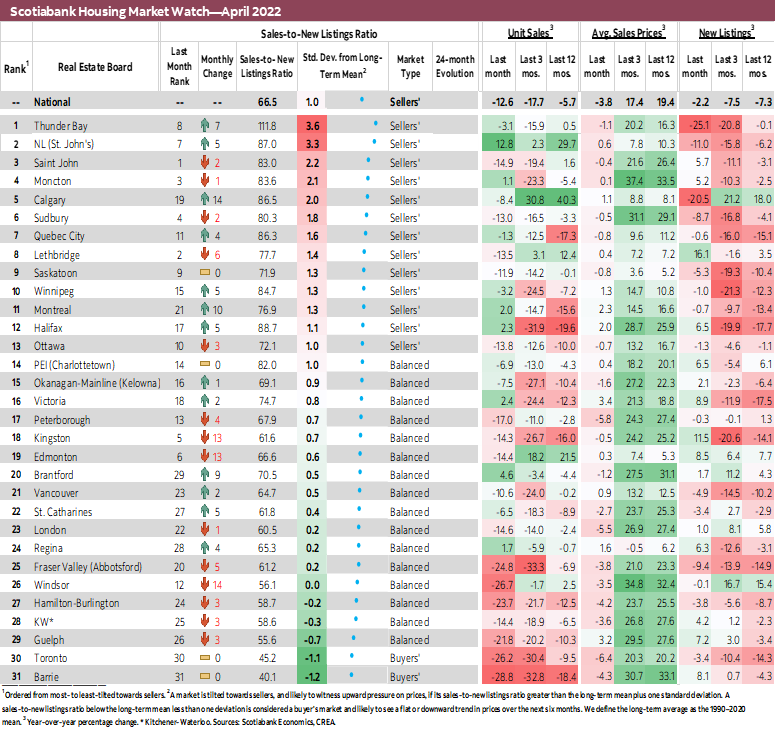 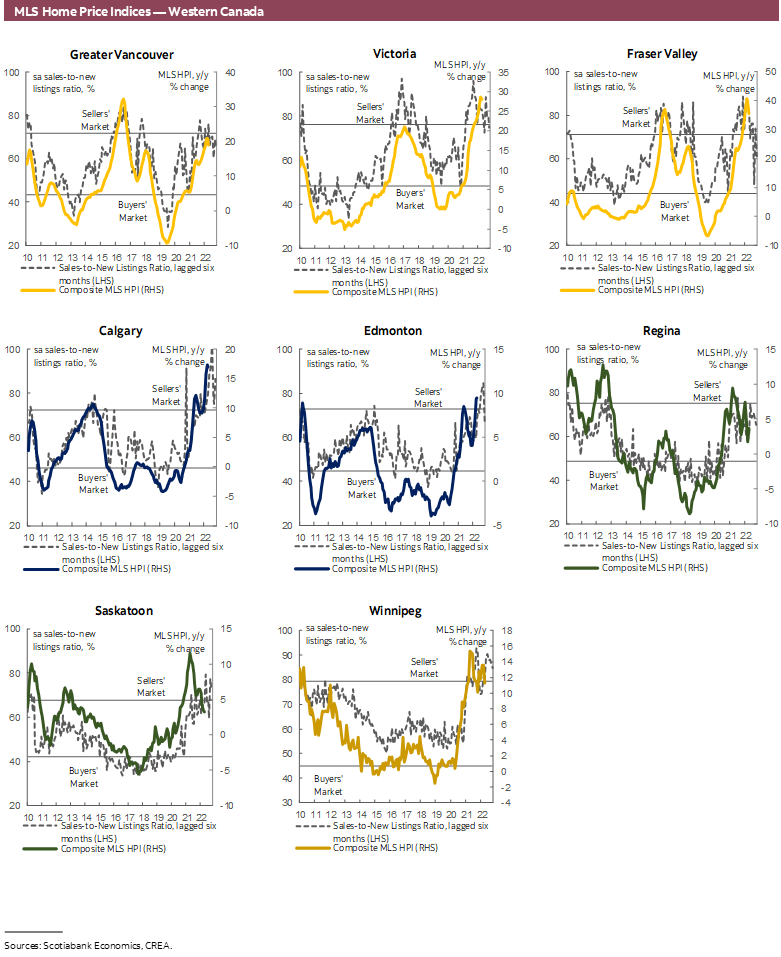 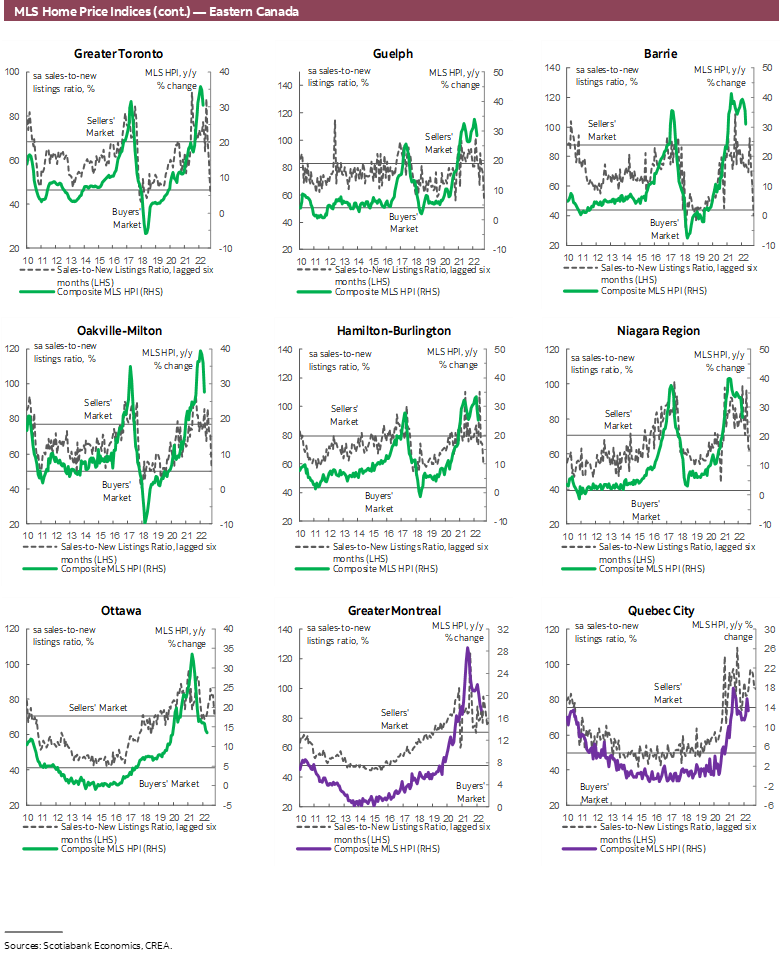