While incoming data continue to suggest remarkable strength in the Canadian economy, the impact of the Russian attack on Ukraine is leading to significant negative revisions in Europe. A recession is likely in some countries owing to the impact the war has had on input prices, but for commodity exporting countries this does not appear likely. From our perspective, the talk of a global recession appears premature, but even if one did occur, its impact on Canada in particular would be significantly muted by the strength of our terms of trade.

Owing to this view, we continue to believe that policymakers in the United States and Canada will proceed with a rapid withdrawal of stimulus. For both countries, we expect policy rates of 3% by this time next year. A few 50bps moves are likely in the lead-up to that. For Canada, as we have long forecast, we believe the first 50bps move will occur on April 13. In the US, we expect a 50bps move at the May meeting of the FOMC. While the change in nominal policy rates will be aggressive by historical standards in terms of its pace, the endpoint for rates relative to neutral policy rates will not be very high from a historical perspective. From a real policy rate standpoint, negative real rates are expected through early next year. As a result, it is best to speak of a withdrawal of stimulus rather than a tightening of policy. It may appear to be an overly semantic point, but it is important to understand that even with a rapid tightening, policy would likely remain accommodative in both countries for much of the next year.

In a Canadian context, it also important to note that the financial situation of households remains surprisingly strong. Cash balances are incredibly high, the debt-to-asset ratio is at close to 20-year lows, and wealth—and very importantly its distribution across income quintiles—suggest households will be able to handle the rate increases to come. Moreover, the pent-up demand from households is at levels never observed historically (chart 1). This is likely to reduce at least temporarily the impact of inflation and interest rates on consumption decisions. Higher interest rates and inflation will of course reduce economic activity, but the underlying economic fundamentals remain very positive, and this should allay some fears that higher rates will tip us into recession. In fact, our recession probability model continues to point to a very low risk of recession over the next 4 quarters (chart 2). That being said, we anticipate a slowing to sub-2 percent growth in the second half of 2023, a pace of growth that is roughly in line with our estimate of potential. 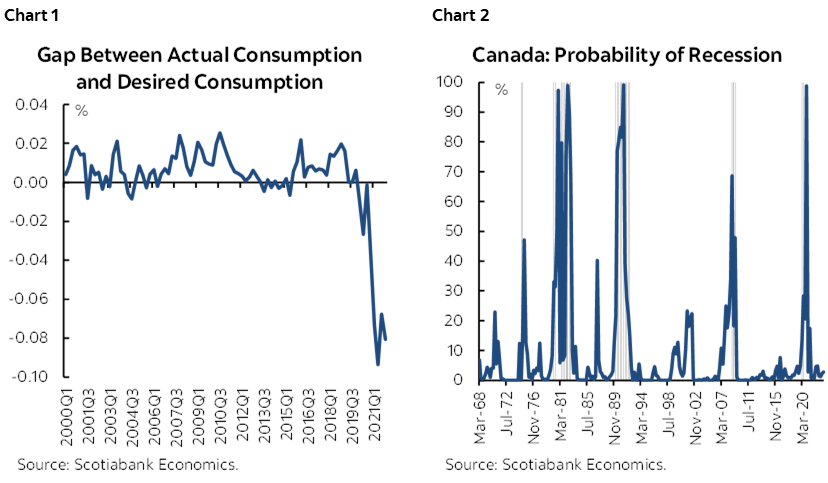 Against this rate and economic backdrop, inflation in Canada will remain well outside the BoC’s inflation control range owing to the combined impact of the strength of global demand on input prices to date, the lagged impact of supply delivery challenges, the consequences of the war in Ukraine, the strength of the Canadian job market, and persistent upward pressure on rents as house prices continue to reach new highs. The inflationary pressures resulting from higher commodity prices will fade over time, as will some pressures associated with logistical bottlenecks. Shipping costs have already fallen substantially from their peaks, for instance. This should lead to inflation moderating in the second half of the year and into 2023, yet it is clear that inflation expectations of both households and firms are uncomfortably high. This, and the economy being in excess demand, will keep inflation above the BoC’s target through 2023. We anticipate average annual inflation of 5.9% this year and 3.2% next year. 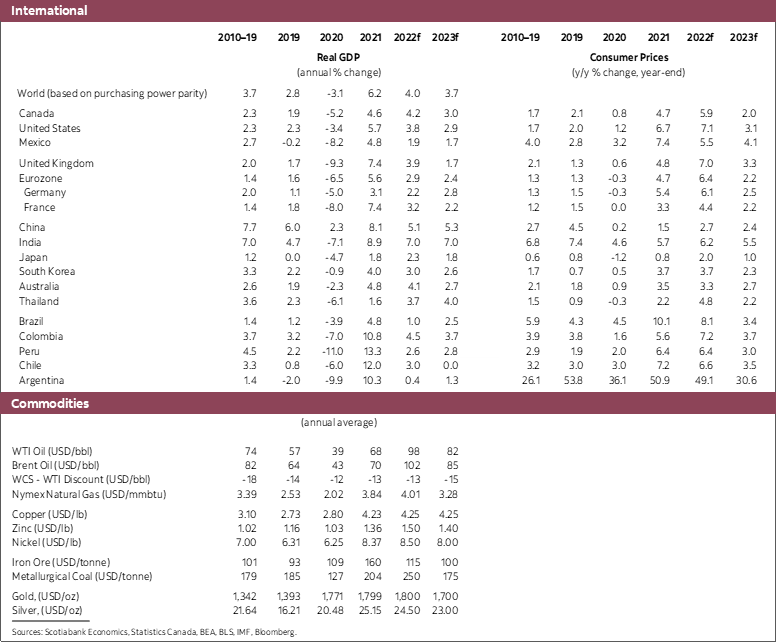 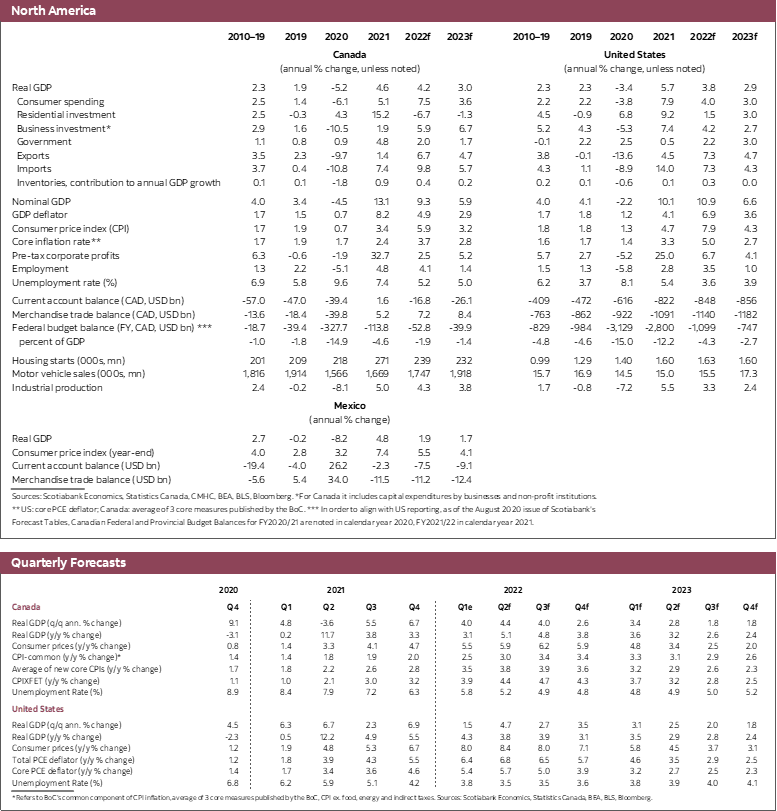 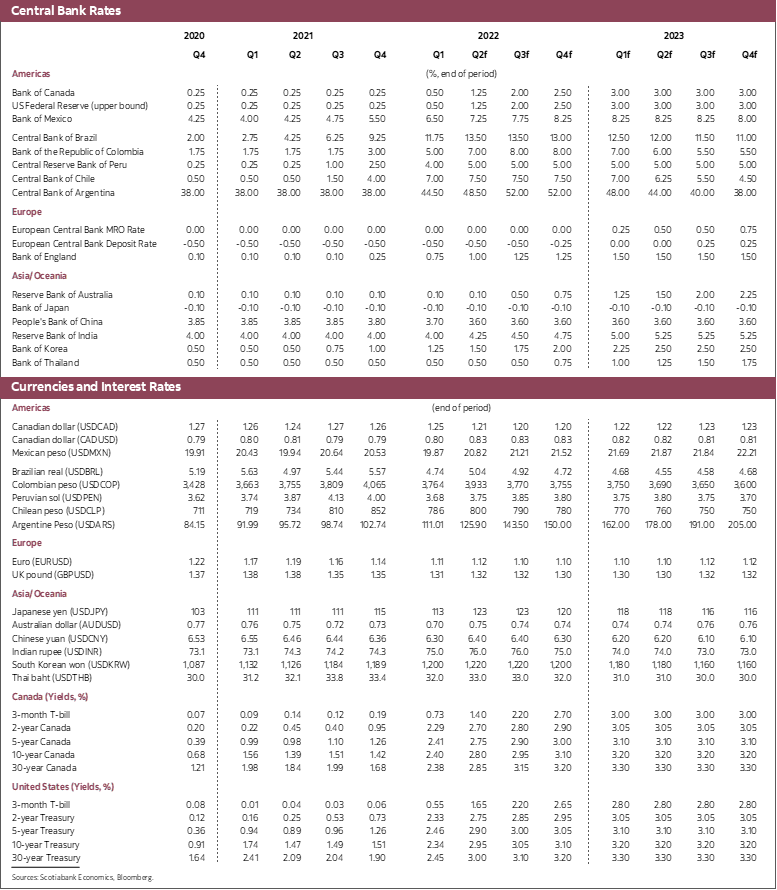 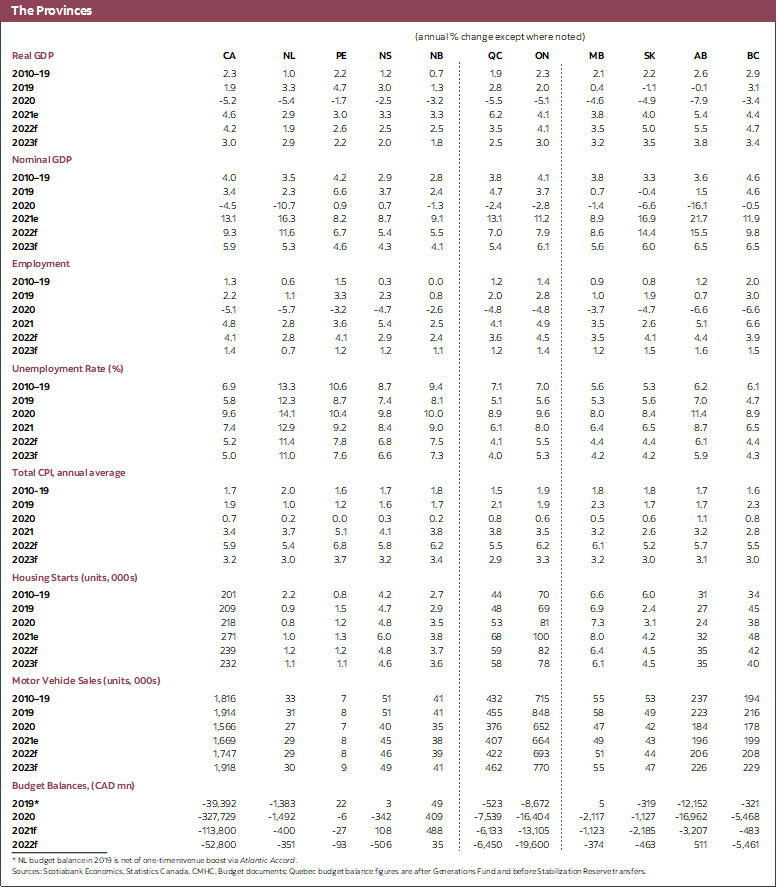