We begin by stating—just as we have with all other Canadian provinces—that the pandemic has upended Saskatchewan’s financial plans. In early 2020, Saskatchewan had anticipated a return to balance—hard-won after the sharp oil price correction that began in 2014—and stable surpluses through at least FY23. Now, black ink will have to wait until FY27—seven years later than expected in the last pre-COVID-19 blueprint. The fiscal shortfall of more than 3% of provincial output pencilled in for FY22 would be the largest share since the period of deep red ink experienced during the early 1990s.

However, Saskatchewan’s balance sheet remains in relatively good shape. Though it is now forecast to climb steadily from FY21 to FY25, Saskatchewan’s net debt-to-GDP ratio is—as it stands—on track to be the lowest of any region through FY25. With the benefit of a more modest debt load than many of its peers, the province anticipates a debt service-to-revenue ratio of just 5.2% this fiscal year—the lowest announced by any jurisdiction thus far for FY22. Charts 6‒8 on page 3 summarize Saskatchewan’s key fiscal indicators relative to those in other provinces. Interest costs may rise with provincial debt beyond FY22 or if bond rates continue to climb as anticipated, but FY21‒22 indicators suggest that debt and borrowing levels remain sustainable over the medium-term.

Budget builds in prudence with revenue projections based on economic growth below the private-sector mean; this opens the door for near-term upside to fiscal balances. Both Saskatchewan and Canada are assumed to grow by less than 4% in real terms this year, in contrast to the rates nearer to 6% pencilled in for both in our latest forecast update—published after the passage of the US stimulus package. Meanwhile, WTI is assumed to average 55 USD/bbl in calendar year 2021—about 3 USD/bbl below the year-to-date mean—and rise only gradually to 59 USD/bbl by 2025 (chart 3). Prudent planning is wise given uncertainty about COVID-19 and lingering weakness in oil production and investment, though future use of any windfalls should be deliberately and methodically considered.

Increased infrastructure outlays should help support the province’s recovery. Relative to the 2019 fiscal plan—the one to detail investment intentions beyond FY22—FY21‒23 capital expenditures related to government ministries and agencies have been increased by $1.4 bn (chart 4). Another $3.2 bn is expected to be provided over FY22‒23 through Saskatchewan’s commercial Crown sector. Ventures targeted under the province’s Capital Plan include highway projects, health care facility improvements, broadband network upgrades, and various construction activities deemed likely to stimulate economic growth and local job creation.

The fiscal plan continues to include spending restraint. Recall that expenditure control anchored provincial consolidation plans following the last commodity price downturn. In FY22, the province projects that total expenditures will advance by a solid 7.1%, an increase that largely reflects the new policies outlined above. In FY23, it has built in a 1.7% reduction in total spending—presumably related to a drawdown in pandemic assistance—and average annual growth of just 1% during FY24‒25 (chart 5). The latter rate compares with outer-year CPI growth forecasts in the 1.6‒1.7% range—suggesting that spending control may prove challenging—though stronger-than-anticipated economic growth may leave room to relax the degree of planned spending restraint.

Saskatchewan anticipates borrowing requirements—which it conducts entirely via the General Revenue Fund—of $4.657 bn in FY22. That follows a forecast of $4.456 bn in FY21, just completed. In FY22, nearly $300 mn of the total is allocated to refinancing maturing debt, with the rest expected to finance the provincial deficit and infrastructure plans. 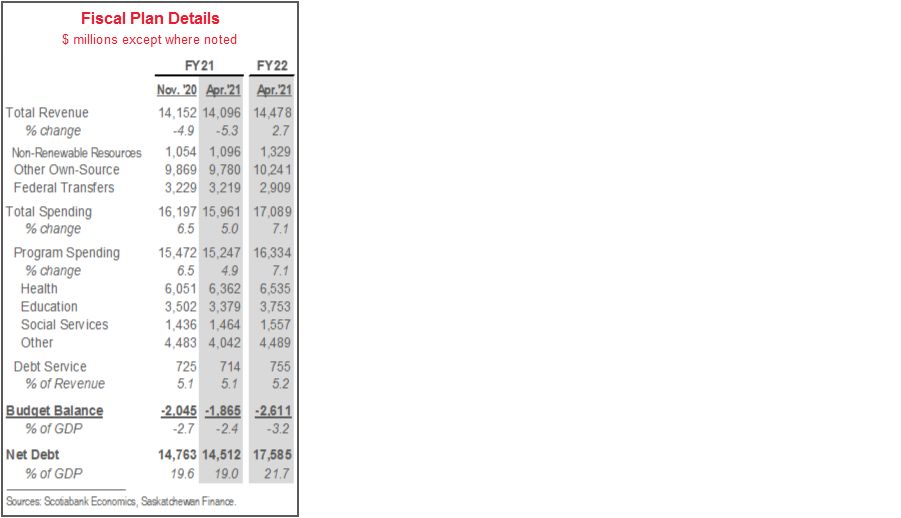