COVID-19 has severely impacted Nova Scotia’s finances, as it has elsewhere around the world. Prior to the pandemic, Nova Scotia had run five consecutive annual surpluses and was one of the few Canadian jurisdictions with stable balances penciled in for the foreseeable future. This first multi-year plan since the virus arrived in Canada expects deep—though not historically so—deficits in the next two years and does not anticipate a return to balance for another four years. The province’s net debt has also been pushed higher, though it, too, is assumed to remain well below the record highs reached in the early 2000s.

Still, Nova Scotia’s finances look to be in good shape relative to those of many other provinces. As a share of output, deficits in FY21 and FY22 exceed only those forecast by New Brunswick (chart 3, p.2), and at the time of writing, no other province had projected a return to surplus before FY25. Projected net debt levels are in the middle of the provincial pack (chart 4, p.3). While these are expected to rise over time, increases had been planned before the pandemic and the discrepancy versus last year’s plan is only 4–5 ppts per annum. FY22–25 debt servicing costs near 6% of revenues compare favourably to those in many other provincial plans. These results reflect prudent fiscal planning before the pandemic and Nova Scotia’s relative success to date in containing COVID-19’s spread.

Economic growth forecasts for 2021–22 are slightly higher than the private-sector mean submitted for budget planning, but more recent improvements in the global outlook present some upside potential for balances. Our March 2021 projections assume real GDP growth of more than 6% in both Canada and the US this year—in large part because of American fiscal stimulus—versus more conservative gains in the 3.5–4.5% range in Budget. Our baseline scenarios—should they materialize—could translate into stronger-than-anticipated revenue gains across Canada.

Achieving the FY25 budget balance target will require a degree of spending control. A total expenditure decline approaching 2% is built into FY23, and spending is set to be held virtually flat in the final year of the plan. These targets may prove challenging if population growth returns to its pre-pandemic trend rate reasonably quickly and inflationary pressures begin to pick up towards the end of next year as widely anticipated. Yet accounting and consolidation adjustments and any revenue windfalls may provide room to smooth the outer-year spending profile.

We approve of the plan to keep infrastructure outlays elevated for now. The province’s FY22 capital plan was unveiled earlier this week and targets spending above $1 bn for the second consecutive fiscal year. This should support the province’s ongoing economic recovery from COVID-19. FY22 funds are concentrated in traditional projects like roads and bridges, and include investments in information technology.

Other policy measures detailed in the plan are consistent with long-run growth objectives and efforts to mitigate the pandemic’s adverse impacts. Economic initiatives include funding to enhance computer science education, training grants for universities, fee reductions for tourism accommodations operators, and a pledge to reduce regulatory costs on business by $10 mn in 2021. Funds for vaccine distribution and personal protective equipment aim to bolster the province’s pandemic response alongside funding earmarked for long-term care, mental health support, and various health system capacity expansions.

Budget assumes that federal transfer payments will ease beyond FY21. After surging above $450 mn in FY21, “other federal sources” of revenue—an umbrella category that includes funds related to Ottawa’s Safe Restart Agreement and Essential Workers Wage Program—is expected to decline by almost 90%. This reflects expectations that COVID-19 supports will be wound down.

Nova Scotia’s borrowing program is expected to total $2.2 bn in both FY21 and FY22, then ease to $1.8 bn in FY23, $1.3 bn in FY24, and $881 mn in FY25. Consistent with the deficits now anticipated for much of the forecast horizon as well as stepped-up capital spending, the FY21–24 borrowing requirements are a cumulative $3.1 bn more than forecast in Budget 2020. The province increased issuance of shorter-dated term debt maturities in FY21, bringing the mean term to maturity of its gross debenture portfolio to 13.7 years at March 31, 2021—slightly lower than the 14.4-year mean one year prior. Nova Scotia intends to maintain access to a range of foreign and domestic borrowing sources to obtain low financing costs and sustain demand for its debt. No pre-borrowing has been done for FY22.

Resumption of strong population growth remains crucial to long-run economic growth. Recall that Nova Scotia was in the midst of its strongest headcount gains in nearly 50 years before the pandemic. Immigration, inflows from other provinces, and non-permanent residents all contributed handsomely to the economic expansion, in large part by supplying skilled labour to the province’s regional cluster of high-wage services industries. In line with the winter 2020 fiscal update, the province assumes population gains of just 0.2% from July 1, 2020 to July 1, 2021, followed by 0.8% in 2022 and 1% growth in 2023 (chart 5, p.3). Budget also announced $252k to expand Nova Scotia’s Office of Immigration and Population Growth in order to pursue further attraction and retention of skilled newcomers. 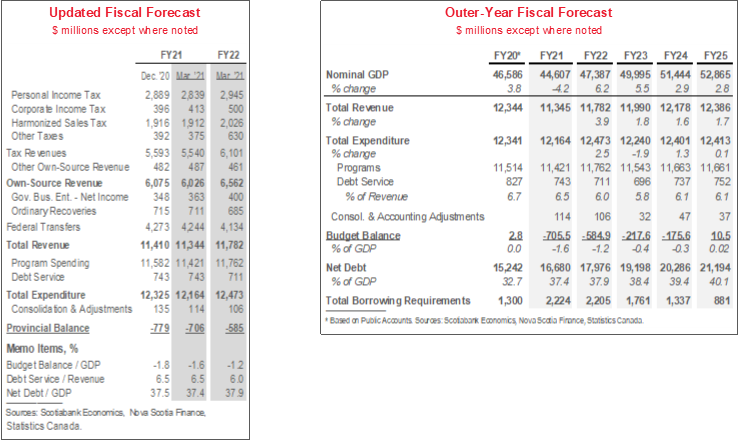