Manitoba’s long-run fiscal position has deteriorated as a result of the COVID-19 pandemic—just like in other provinces. In FY20, the province reported its first annual surplus since before the Global Financial Crisis and had projected a steady decline in its net debt-to-GDP ratio. Now, it anticipates that a return to black ink could take until FY29, and that its debt load will reach a new record-high share of provincial output in FY22, having already done so last fiscal year. The government notes its concerns with respect to Manitoba’s $38k per person gross debt load—estimated to be the highest of any Canadian province last fiscal year.

Still, Manitoba compares favourably to other jurisdictions on some key fiscal indicators. Its projected deficit, while elevated in FY21‒22, is not expected to reach a record share of GDP and—as it stands—is towards the lower end of current provincial plans. As a share of revenues, debt servicing costs are also expected to stay smaller than those of peers. While rising bond rates could certainly push financing charges higher, the easing path projected for the debt-to-output ratio may help contain upward pressure. Charts 6‒8 on page 3 summarize Manitoba’s forecast fiscal indicators relative to those of other Canadian provinces.

COVID-19-related expenditure is significant. The $1.2 bn (1.6% of nominal GDP) in related spending in FY22 is down from last year’s $2 bn (2.8%), but less so than in several other provinces that have broken out COVID-19 expenditures in their fiscal plans. The bulk of the $1.2 bn total is associated with vaccine rollout, personal protective equipment, and preparation for future pandemic waves.

Accordingly, medium-term spending plans have changed. Recall that the pre-pandemic blueprint included average annual total expenditure growth of just 1.1% during FY22‒24. Net of FY22 pandemic spending, the last three years of the current plan are built on mean yearly growth of more than 3% (chart 4). Revenue and expenditure plans beyond FY25 were not detailed.

Policies to advance economic growth include a range of targeted sectoral supports. Sales taxes will be waived on personal services such as haircuts and salon visits, and rebates will be offered for education property taxes. Tourism and accommodation sector operators will receive financial assistance. Funds for workforce training aim to help firms fill labour shortages during the economic recovery. As announced in January, the government has created a Department of Advanced Education, Skills and Immigration, dedicated to aligning post-secondary education and immigration programs with provincial labour market needs. Infrastructure spending is expected to reach $2.1 bn in FY22.

Economic forecasts are less sanguine than many current private-sector projections, which suggests some near-term upside for budget balances. Our last forecast update—completed after the passage of US President Biden’s fiscal stimulus package—assumed an expansion of just over 5% in the Keystone Province in 2021. Should the economic backdrop evolve as we anticipate, it could bolster government coffers and reduce the projected deficits. Under the province’s more optimistic growth scenario—based on above-average projections in its Survey of Economic Forecasts—balance could be achieved as early as FY23 and net debt would fall below 33% of output by FY25. A pessimistic scenario is associated with fiscal shortfalls in the $1.5 bn range throughout FY23‒25.

The province’s Fiscal Stabilization Account adds a modicum of prudence to the plan. The fund is expected to have a balance of $585 mn by the end of FY21 (chart 5), following a draw of $215 mn that was allotted to COVID-19-related spending. Details of FY22 balances will be announced later this fiscal year.

Manitoba projects gross borrowing requirements of $5.7 bn in FY22. About $2.7 bn of that figure relates to refinancing, and at budget time, $771 mn of pre-financing had been completed. The government further estimates new cash requirements of $3 bn (net of estimated repayments); that includes general government, capital investment, and Manitoba Hydro-Electric Board borrowing. 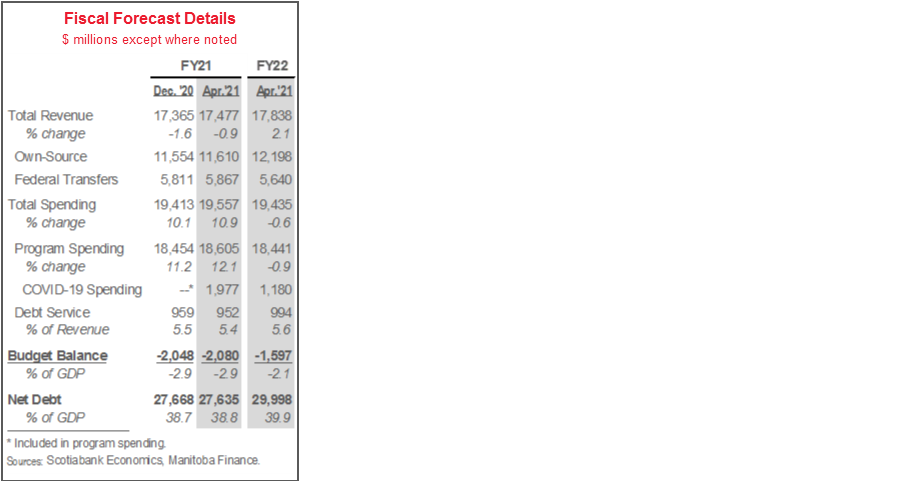