The deficits projected through at least FY24 may dominate headlines, but BC appears poised to maintain the fiscal advantages it held versus other provinces prior to the pandemic. Though its net debt burden is set to reach record heights after several years of surpluses before COVID-19, it should exceed only that of Saskatchewan over the next two years. Debt servicing costs, though expected to climb through FY24, are well below the highs north of 10% of total receipts witnessed in the late 1990s, and the lowest as a share of revenues forecast by any province so far. The estimated FY21 fiscal shortfall beat the prior forecast by $5.5 bn in part due to improving economic conditions. Charts 6‒8 on page 3 summarize key fiscal indicators in BC and those in other provinces.

Fiscal planning includes shorter-term policy support and realistic initial steps towards medium-term consolidation. The plan includes $3.3 bn in pandemic and recovery contingencies this year—building on $7.5 bn in FY21—and a further $1.3 bn over FY23–24. Those funds come with the province in the midst of a new wave of lockdowns, and are split across health and safety measures, essential public services, tourism and arts sector supports, and efforts to encourage hiring and retraining as reopening proceeds. Any unused funds will be applied to operating deficit reduction. Net of these allocations, the government expects total expenditures to advance at a mean annual rate of 3.7% over FY22–24, roughly in line with forecast inflation plus population growth (chart 4, p.2).

Budget contains a smattering of supports for businesses, many of which were announced in the province’s Fall 2020 Recovery Plan. These include: grants for firms that adapt their services and physical space during COVID-19, tax credits for payroll hiring and worker compensation increases, and time-limited sales exemptions for qualifying machinery and equipment purchases.

Other policy detailed in the plan similarly builds incrementally on ongoing initiatives. Almost $2.3 bn was allotted over FY22–24 for child care; the government broadly aims to continue to create new spaces and improve affordability. The province has allotted $1.1 bn per year to advance affordable housing construction objectives underway in its Homes for BC plan. Applications for the BC Recovery Benefit—a one-time, tax-free payment of up to $1k for eligible families—remain open until June 30. To fight climate change, the province unlocked some new capital and operating funding for clean transportation and energy-efficient buildings, and will extend its Climate Action Tax Credit that offsets carbon tax payments through FY24.

Economic forecasts are characteristically prudent and leave room for upside on budget balances. BC has long mandated that fiscal blueprints be based on economic growth less than the private-sector mean expectation. That approach is reflected in this plan with real advances 0.5 ppts lower than anticipated by the province’s Economic Forecast Council in both 2021 and 2022. The outlook has improved since the February forecast submission. Based on BC’s own sensitivity estimates, a nominal 2021 expansion in line with our recent estimate in the 9% range—rather than the current 6.4% projection—could generate another $600 mn in revenues. The plan also includes forecast allowances of $1 bn in FY22, $750 mn in FY23, and $400 mn in FY24, plus general program contingencies of similar size.

Following several other provinces’ leads, BC intends to boost infrastructure spending to bolster its economic recovery. It now expects total capital outlays to average $13.2 bn per year (4% of GDP) during FY22–24—of which about two-thirds represent taxpayer-supported expenditure—with FY22–23 total capital spending more than $5 bn higher than in last year’s budget (chart 5). These levels are among the most significant announced among the provinces so far. The bulk of increases relate to educational and health facility upgrades and transportation infrastructure. Investments in the latter category amount to $7.5 bn over the next three fiscal years and arguably present the greatest opportunity to enhance BC’s potential growth, but the government noted that their timing will depend on Federal funding.

The province expects its borrowing requirements to amount to $51.9 bn from FY22 to FY24. It indicated that these funds will finance operating and capital investments, plus the refinancing of debt maturities. BC forecasts new borrowing of $18.2 bn in FY22, $18 bn in FY23, and $15.2 bn in FY24; these follow an estimated $17.9 bn in FY21. 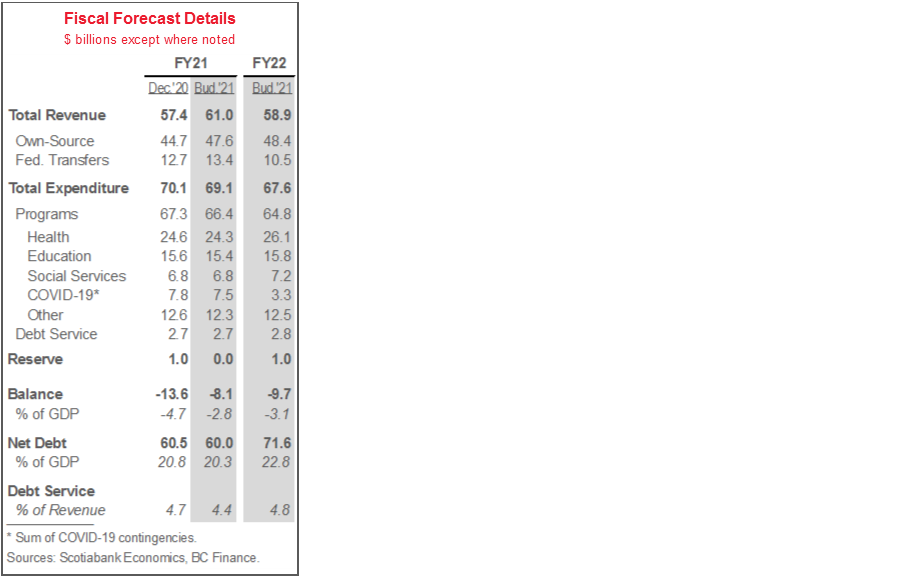