If Canada can pose inflation numbers like these when much of the country was supposed to be staying at home in lockdown, absent US-style stimulus cheques and with at least temporary disinflationary currency effects, then just imagine what reopening may bring over coming months. Instead of being something to fully look through, it remains feasible this is just a stimulus-fed warm up act.

I have to admit that I’m rather surprised by the magnitude of the strength that was exhibited across virtually every way of slicing the inflation readings. It’s the month-over-month readings that carried the most surprise and that matter the most here. For even a relatively hawkish economist to have underestimated this inflation report is about as fun as a flock of geese defiling one’s picnic area, but if you bear with me then I’ll explain why I’d be more inclined to go for a long walk if this was due to a fundamental error rather than the genuine surprises in this release. The report shouts out ‘wow’ at every turn and there is definite information to BoC expectations in that observation.

Before delving into the details, recall that one should be taking the official year-over-year rate and adding about 0.4% to it to get the measure that will become official with June CPI released in July. At that point, StatsCan will revise basket weights in CPI to reflect how people are spending during the pandemic. In other words, ‘true’ headline inflation is running at about 3.8% y/y which is blowing the BoC’s bands (chart 1). We haven’t seen a higher number than 3.4% y/y inflation since May 2011 and we haven’t seen a higher number than 3.8% y/y since March 2003. Revised weights that reflect pandemic realities may also bump the core inflation measures higher when Statistics Canada shifts weights in July, but there has been no guidance to date on how unofficial core inflation may be tracking and no detailed breakdown of the pandemic-era weights to enable calculation of pandemic-era core measures.

The surprise factor was in the month-over-month seasonally adjusted price gain of 0.6%. The average monthly rise during the pandemic has been 0.1% m/m and the last time we saw a number this strong was last June when the economy was sharply recovering from the March/April contraction. This time we were in lockdown. Base effects were predestined to lift the headline year-over-year rate of inflation toward 2.9% but it’s the strong gain in month-ago terms that was the surprise here .

Average core inflation popped higher to 2.1% y/y which is the highest reading since February 2012, although that was a one-month wonder. Prior to that, the sustainably higher numbers were back in 2009 as the GFC was in the early stages of exerting disinflationary pressures yet this time we’re on the upswing. As chart 2 depicts, Canada never really dipped all that low as the pandemic was striking with full force since average core inflation the way the BoC presently defines it bottomed at 1.6% y/y last May and July. Before base effects may have begun to play a partial role this year, average core inflation was rising to 1.8–1.9% and then today’s 2.1% takes us above that with strong assists from the month-over-month price changes within the basket. 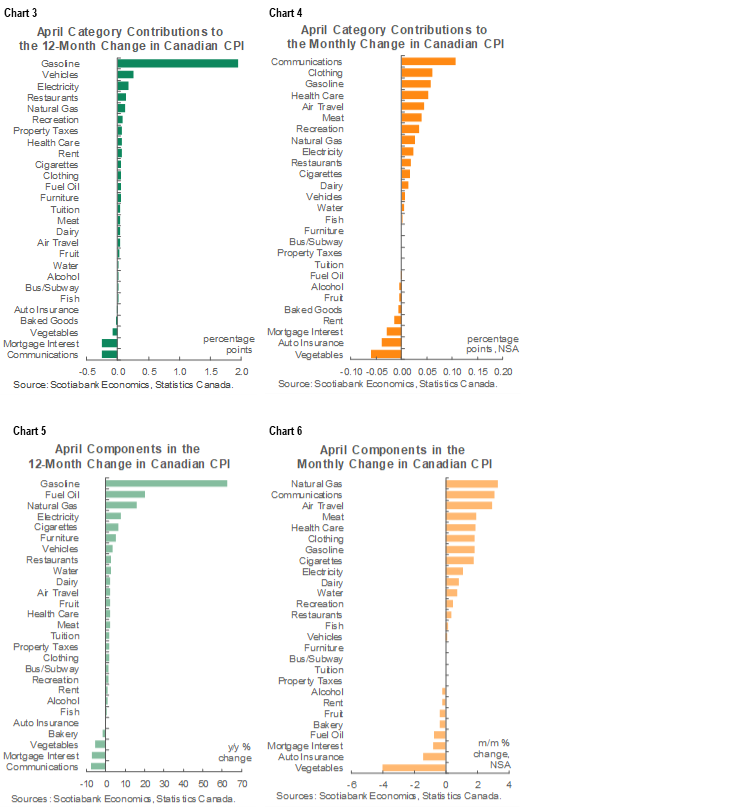 Also recall that by the BoC’s estimates in the April MPR, the currency is already supposed to be tamping down inflationary pressures on a transitory basis particularly as it climbs higher since the MPR (chart 7). A permanent appreciation in the currency is a sustained impact upon the level of CPI but not on the inflation rate itself. Therefore, unless we’re on a march to parity here, then as the currency’s repricing of the outlook begins to stabilize then the disinflationary effects of its rise should also begin to drop out. In other words, absent this headwind, inflation could be stronger.

Chart 8 depicts cumulative seasonally adjusted cumulative price changes since the onset of the pandemic by category.

So what do you do if you are Governor Macklem? I think he’ll continue to emphasize that the BoC has a flexible inflation targeting range of 1–3% and they are prepared to use it for a time in the belief that a sustained challenge to their inflation mandate won’t arise until we have a fully 100% inclusive job market recovery. Still, the April MPR had predicted headline inflation at 2.9% y/y in Q2 so we’re tentatively tracking higher than that but tracking risk will be informed by how base effects stabilize and, more importantly, whether we get continued upside surprises in the month-over-month readings. In other words, it’s not impossible that we get 2.9% y/y for the quarter, but a cautious stance would look higher so stay tuned…

In fact, by the time the July meeting rolls around it remains feasible that another bond purchase taper will be in the cards before getting out of the bond buying game by Fall. The BoC’s clear pandemic-era emphasis upon not pulling back on the reins until we have a 110% inclusive recovery because we won’t get durable inflation until that point is being tested by persistent upsides to inflation tracking compared to what they thought would happen when all this stimulus was first put into place. Inclusiveness is wonderful, but in monetary policy terms it’s a concern that productivity growth is as bad as it has been in Canada relative to the US (chart 9) during what St. Louis Fed President Bullard has called keep households whole policies. This serves as a restraint against the supply side that could be the determining factor to generating sustained above-target inflation.

After years of undershooting its targets, Canadians need to hear quite soon whether the BoC is comfortable with a sustained make-up strategy or whether 2% is indeed the goal in this cycle. I think it’s 2% within a flexible range, but that’s a bit mealy-mouthed in that flexible needs to be defined in terms of how long and how high. If further pressures arise through vaccine-fed reopening plans then markets might not prove to be as patient as the BoC would like them to be in waiting for the conclusion of its strategic review toward year-end. If the BoC is supportive of an inclusive labour market agenda bolted onto an inflation make-up strategy marked by being uber-flexible for a while then say so.

Chart 10 breaks down the components among 55 price inputs that were included within this month’s trimmed mean CPI gauge. 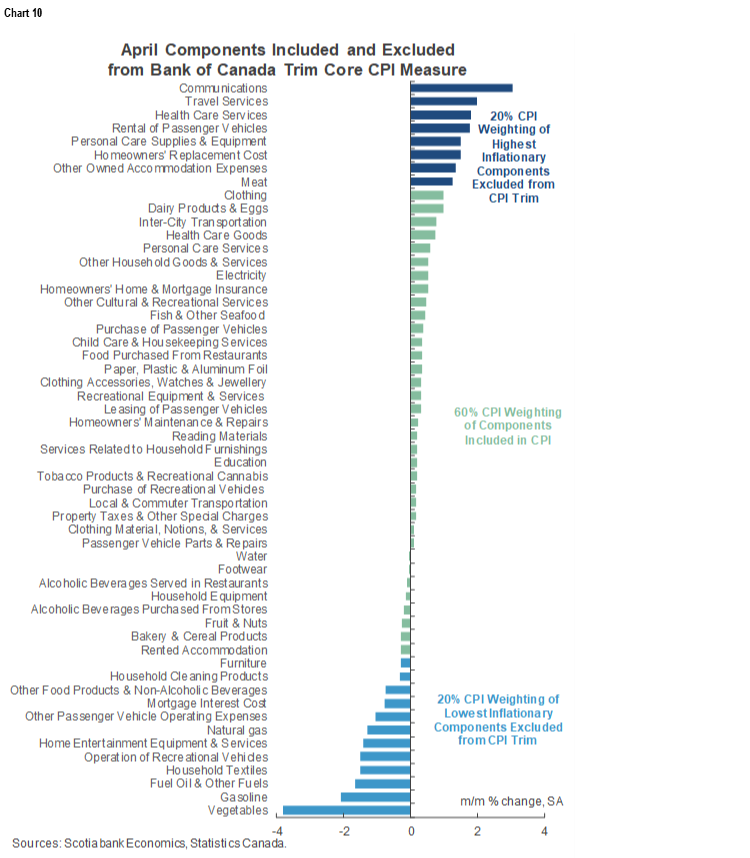