The Bank of Canada (statement here) hiked its overnight rate by 50bps as all economists expected but by less than markets were pricing.  Scotiabank Economics has consistently led consensus on the pace and timing of hikes and we see the BoC as still sitting a great distance below where it is likely to take the policy rate. Instead of a lighter-than-priced hike being taken in a relatively dovish sense by markets, the offset was a more hawkish nod in the final sentence that signals heightened worries at 234 Wellington Street.

The result was to drive the 2-year GoC yield up by about 7bps while the 5-year yield also cheapened by a similar amount. The Canadian dollar slightly appreciated to the USD and somewhat more versus several other crosses since stronger than expected US ISM-mfrg data arrived at the same time. Chart 1 shows the meeting-by-meeting price adjustments before and after the statement. 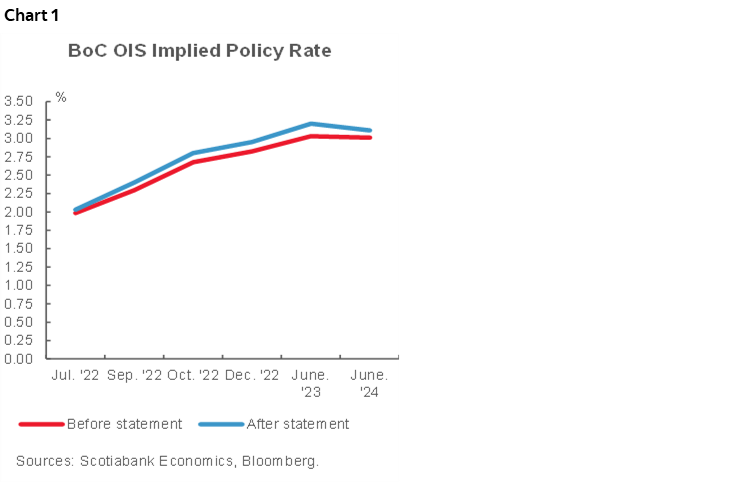 The key is what they mean when they say they are “prepared to act more forcefully if needed” to meet its inflation target. The exact reference is in the final paragraph:

"The pace of further increases in the policy rate will be guided by the Bank’s ongoing assessment of the economy and inflation, and the Governing Council is prepared to act more forcefully if needed to meet its commitment to achieve the 2% inflation target."

That’s the first statement-codification of “forcefully” whereas previously it was verbalized by the Governor (here). Adding “more” ups the ante. More forcefully than merely forcefully might sound like the sort of economic Kremlinology that could only fascinate economists, but it had to be a deliberate warning to markets. The question is how and by how much. As shown in the accompanying statement comparison, this final sentence also removed reference to how “the timing” of rate hikes will be guided by ongoing assessments which signals they’re really in a bigger rush now. That was also a very deliberate move.

Given that the BoC has already been hiking at a 50-point clip twice-in-a-row now, "more forcefully" than prior off-statement references to simply act “forcefully” could well mean faster than 50 at a time is in the cards. So it should be.

Alternatively, “more” forcefully and removing “timing” could combine to mean a more compressed pattern of hikes which would be consistent with our 100bps of further hikes in the next two meetings. It could also mean that the BoC is signalling a higher terminal rate objective. All three being delivered simultaneously is entirely feasible which would have the BoC picking up the size of hikes in July, the pace into the Fall, and a higher terminal rate than they may have previously believed likely.

The other reason I think this line is signalling more openness to something greater than 50 is that we already knew that they want to get into the neutral range fairly quickly before either pausing or continuing. That’s one reason why we previously had 50-50-50 June–July–Sept moves in our forecast. To be more forceful than prior guidance to get there “quickly” sounds like they want to pick up the size of the moves unless they mean more quickly than merely quickly which just seems like a flagrant abuse of the English language.

July would be a suitable setting for this given they'll present fresh forecasts including a need to raise their inflation forecasts again and there will be a full press conference to explain the hastened move.  If jobs, hours and maybe wages accelerate again in next week’s release after last month’s possible distortions due to the Good Friday holiday and sickness and the June 22nd CPI update with freshened weights spikes higher again then the stage may be set.

Also note that the BoC probably has a preliminary understanding of what consumers and businesses are telling it on the path to its July 4th release of its latest business and consumer surveys. Interviews were conducted over the back half of May for businesses and before that for consumers. They may already have a sense of likely further pressure on measures of inflation expectations, wage pressures, capacity pressures and hiring plans. Why they take a hamster’s age to turn around the results in a formal report still escapes me. That may have played into today’s intensified concern especially given the concern that high inflation is driving higher expected inflation which could be very difficult to contain. Anecdotes don’t make for data, but evidence of this may be drawn from the fact that multiple large North American companies are delivering off-cycle wage hikes amid tight labour markets and a rising cost of living alongside some instance of labour strife.

With that, we’ll await what we hope to be further guidance from Deputy Governor Beaudry in tomorrow’s post-statement Economic Progress Report” speech and the ensuing press conference. Headlines appear at 10:45amET and the presser will be held at ~12:15pmET.  It wouldn’t be out of character for the BoC to drop something like they did today and then leave us hanging into July.

On inflation guidance, there was nothing in this statement to assuage concerns about how the BoC is reading the risks. Quite the contrary in fact. They note that Canadian inflation is “expected to move higher in the near term.” They observe that various factors are “boosting inflation” and “putting further upward pressure on prices” with “wage pressure intensifying” in the US as the Canadian economy “is clearly operating in excess demand.” The BoC has wiped from its vocabulary any references to transitory, base effects, narrowly based and reopening effects and done a full 180’ turn on inflation risk.  That’s about as alarmist as a non-excitable bunch of central bankers would likely ever get in signalling inflation worries.

Other more trivial matters include the following points:

Overall, it’s refreshing to see the BoC pivot in this fashion as it is lightyears behind achievement of its 2% inflation target with inflation nearing 7% for the widest overshoot since before they adopted inflation-targeting three decades ago. Having denied inflation risk throughout almost all of 2020–21 and passing on opportunities to tighten into earlier this year, the BoC is now raising economic and market anxiety by the accelerated pace of out-sized moves. This should have never happened had the central bank been more circumspect, less stridently opposed to any talk of upside risk to inflation, more faithful to its two-tailed risk management framework of thinking and more open-minded to inflation risk amid growing distance from emergency conditions. That could have positioned the BoC to act in more gradual fashion along the lines of the central banks that more suitably led global tightening such as the RBNZ and Bank of Korea.