Look Through the Dip in Canadian Jobs

Canada lost 200,000 jobs last month which was roughly in line with expectations, but because the evidence points to all of that being due to restrictions we should see a powerful rebound going forward once restrictions are relaxed and perhaps as soon as the next jobs report. For starters, please see the summary table of the results. 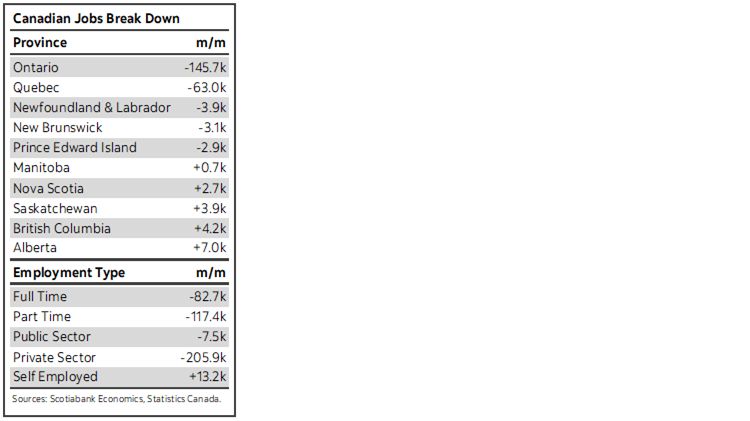 Because the US strongly outperformed Canada on job growth last month (recap here), the Canadian dollar depreciated by about one-third of a cent and Canadian bond yields are under somewhat less upward pressure than they are in the US. Canadian OIS markets are still firmly pricing at least a quarter-point BoC rate hike in March. I would bet against anyone saying this report will knock the BoC off its tightening path or even mildly dent it.

One reason is that you’d have to be totally snow blind not to see wage growth. Even the BoC finally agrees it’s happening. Enter chart 1. On a month-over-month annualized and seasonally adjusted basis, Canada just clocked wage growth of 9.4%. The fact that a relatively modest amount of jobs were lost in lower paying fields may have contributed to some of that, but the trend has been powerful through the pandemic’s ebbs and flows dating back to last July. Over that period of time, annualized m/m wage gains have equalled between roughly 6–9%. With gains like that, the folks still pointing to year-over-year measures will be wondering how they suddenly start turning higher later. That pace of gains stands far in excess of inflation and even more so in excess of moribund productivity that is performing far worse in Canada than the US. As such, a wage-price spiral is underway in Canada that adds to inflationary pressures. 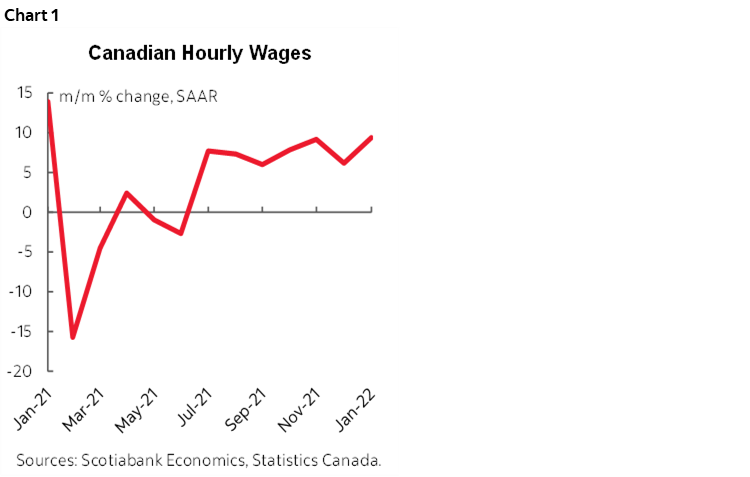 Even with the January setback, Canada has still recovered all lost jobs during the pandemic and slightly more (chart 2). That’s faster progress than the US. 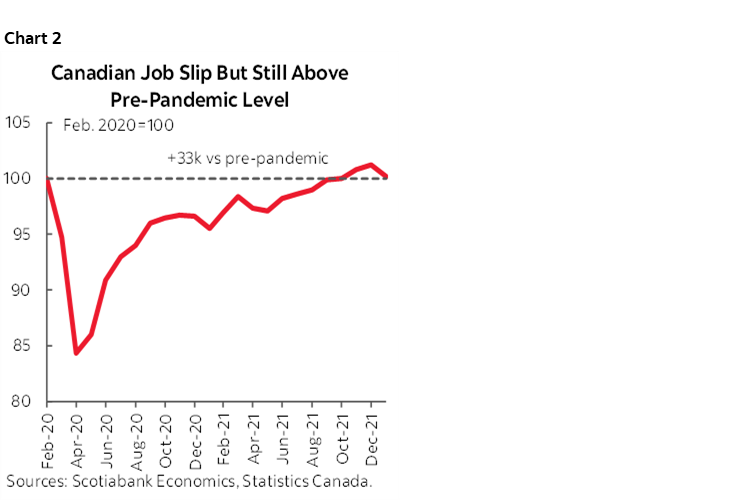 The fact that all of the job losses were in sectors that were hit by restrictions suggests that once restrictions ease, we’ll then get a jobs rebound (chart 3). That’s an important point because it says there wasn’t really any more deeply negative narrative behind the job loss in January. Of the 200k drop, 223k service sector jobs were lost and were mildly offset by a 23k gain in goods sector employment led by construction (22.6k). Within services, accommodation and food services fell 113k, information/culture/recreation fell by 48k and education services fell ~11k with schools offline over at least the first half of the month. Those sectors align with the restrictions against restaurants, bars, gyms and in-person learning. 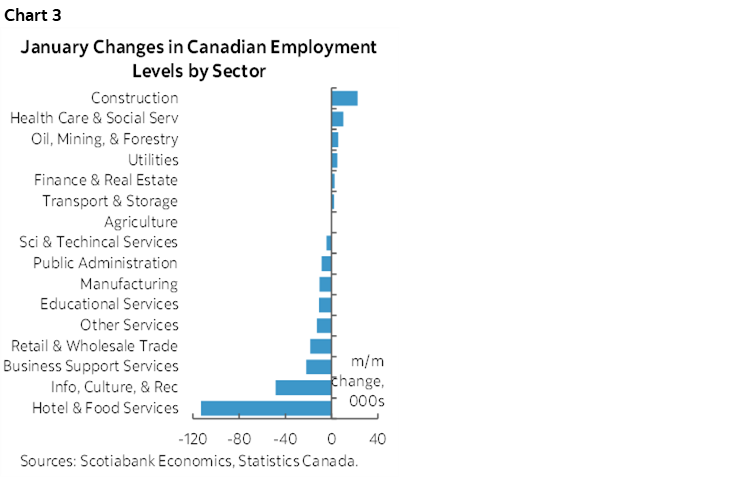 Payroll jobs fell by 213k and this was led by private sector jobs (-206k) as public sector payroll workers only saw a ~8k decline in employment. Self-employed jobs were up 13k.

By province, the job losses were concentrated in Ontario and Quebec partly given their relative size but also given their disproportionate reliance upon heavy restrictions relative to other regions. Ontario lost 146k jobs and Quebec lost 63k. Quebec’s loss wasn’t quite as large as Ontario’s partly because of more public sector jobs (+27k). Within Ontario, 123k of the lost jobs were in info/culture/rec and accommodation and food services. 108k of Ontario’s job losses were in the Toronto area while employment in Montreal fell by 43k and Vancouver declined by 13k.

The covid-19 restrictions hit youths the hardest, robbing them of their early formative years of employment in regressive fashion. Youth employment (aged 15–24) fell by 139k which aligns with the sectors that were hit by restrictions and that significantly rely upon a younger work force. In the over 25 crowd, men and women were hit equally hard as male employment fell by 30k and women fell by 32k.

Hours worked fell by 2.2% m/m in January. They were up a whopping 8.7% q/q SAAR in Q4. If January holds with no further changes, then hours worked would be down 6.5% in Q1 (chart 4). That’s unlikely, however, as the economy reopens and probably takes hours worked back up. Stay tuned. 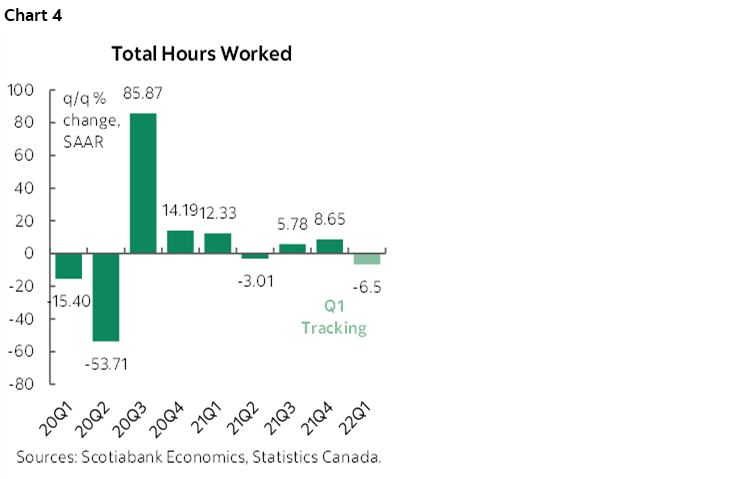 The unemployment rate moved up half a point to 6.5% since the 200k lost jobs eclipsed the shrinkage of the labour pool (-94k).

So if the US smashed expectations for job growth this morning and Canada dipped, who has it right in terms of dealing with the pandemic? That’s a complex matter, but the voice of the economy and its impact upon other aspects of our lives very much deserves to be at the table during the discussion alongside the epidemiologists. It is, after all, a democracy. To date, Canadian employment has far outpaced the US in the pandemic, but a) that came at the high expense of relative productivity figures, and b) that changed last month.

While many health professionals probably see it differently—and to a degree very rightly so because of the acute pressures they face on the front lines after years of underinvesting in hospital bed and staffing capacity despite heavy healthcare spending-the macroeconomic evidence on whether the US has the right approach with no restrictions versus Canada’s choice to apply fairly onerous restrictions may be more balanced if not tilting to the US than some would prefer to think. Both jurisdictions—with and without added restrictions—are seeing hospitalization rates plateau and turn somewhat lower while wastewater testing results are declining. Omicron is fading with or without the help of restrictions which questions whether Canada will see a massive resurgence as restrictions are lifted barring a far nastier and more vaccine-evading variant. Yet what Canada has to show for it is a poor start to the year for jobs.

As I wrote at the start of the year, there is a strong case for being past the point of widespread restrictions and lockdowns and into the stage that doesn’t cost everyone else in society. We could be at an inflection point now at which the US economy has adjusted to the pandemic and is getting on with things while Canada still applies old tools dating back to before vaccines, before better treatment options and before behavioural adjustments, including measures like curfews, lockdowns and other restrictions that cost jobs. Cost businesses that even with fiscal supports see their customer bases and goodwill evaporate. Cost our physical and mental health in ways that go far beyond the pandemic’s toll except for the privileged minority with guaranteed incomes who do not bear the consequences of their one-sided policy prescriptions. Cost us in terms of escalating inflationary pressures that add to the tolls of the pandemic. And cost debtors through the resulting tightening of monetary policy to cool cost of living pressures. How ironic for a country with a notably higher rate of vaccination it winds up with basically the same inflation and rate hikes.