According to IMSS (Mexican social security institute), 391,194 formal jobs were created in the first quarter of 2022, while 21 million workers were registered for social security at the end of April (chart 1). Of these jobs, 86.7% are permanent and 13.3% are temporary. In contrast, only 5,490 new jobs were created in April, as the Easter holidays affected labour market conditions; this figure represents the lowest number of jobs created for the month of April since 2010, suggesting a marked slowdown in the creation of new formal jobs. Compared to the same month last year, the number of workers registered with the IMSS increased 940,859 (4.7% y/y) and the number of employers rose 5.5% y/y, reaching 1.06 million. By sector of activity, the sectors with the highest pace of job creation were transportation and communications (11.7% y/y), construction (6.1% y/y), and transformation (5.7% y/y). In terms of nominal salaries, the average base salary recorded a 10.8% y/y jump, the steepest rise recorded in the last 20 years, reaching MXN 473.9 (USD 23.6) per day. 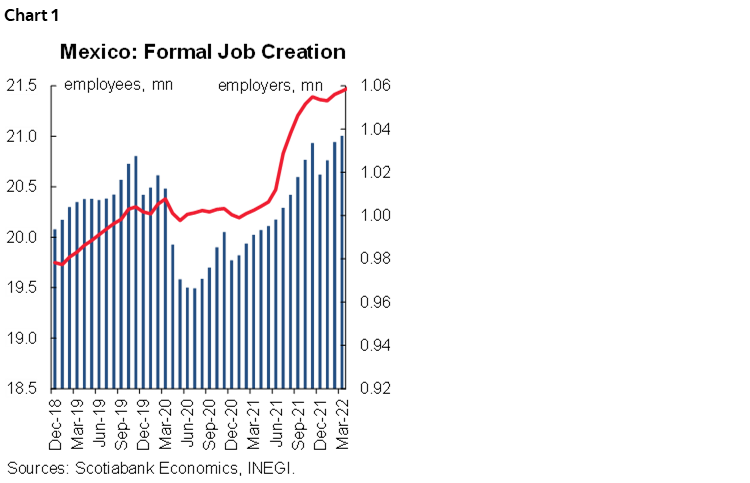 II. Stagnation in investment remains in February, despite an annual drop 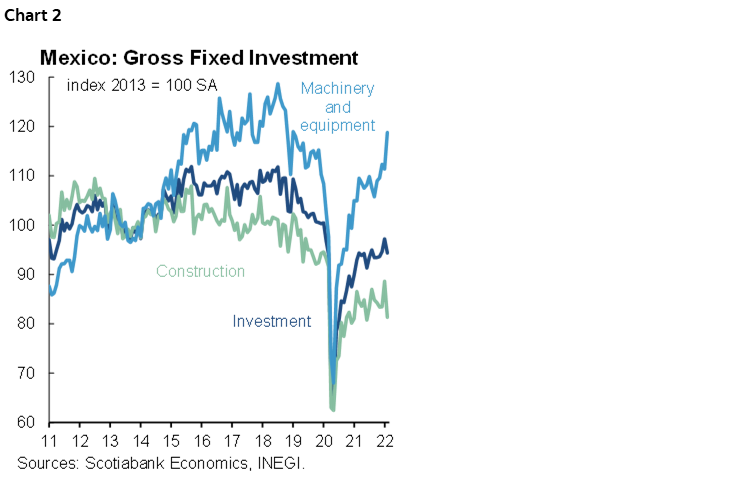 On an annual not seasonally-adjusted (nsa) basis, residential construction posted its fifth consecutive drop, this time of -9.4% y/y, leading to a decline of -6.2% y/y in total construction. However, this drop was offset by a 13.6% y/y surge in machinery and equipment, so that gross fixed investment rose 1.7% y/y (compared to 8.5% y/y previously). Over the last 12 months, the machinery and equipment component has increased 20.8% y/y, supporting gross fixed investment, even as the weakness in construction continues, especially in residential construction. Looking ahead, we expect investment to remain stagnant given the context of local and global uncertainty.

III. Consumption increased in February, as inflation remains the main risk in the outlook

Also in February, private consumption data released by INEGI accelerated on a sequential monthly seasonally adjusted basis, from 0.4% m/m to 1.3% m/m (chart 3). By components the highest pace was in the imported goods, which rebounded from 0.6% m/m to 6.2% m/m, followed by services from 1.0% m/m to 1.6% m/m, and domestic goods from -0.2% m/m to 1.0% m/m. On an annual nsa basis, consumption rose from 7.0% y/y to 9.9% y/y, led by imported goods, which increased 21.8% in February compared to 9.8% in January, followed by services (12.7% versus 11.5% previously) and domestic goods (4.1% versus 2.4% previously). Looking to seasonally-adjusted figures, consumption is already above pre-pandemic levels, and we expect moderate increases to continue, with high inflation as the main downside risks in the outlook. 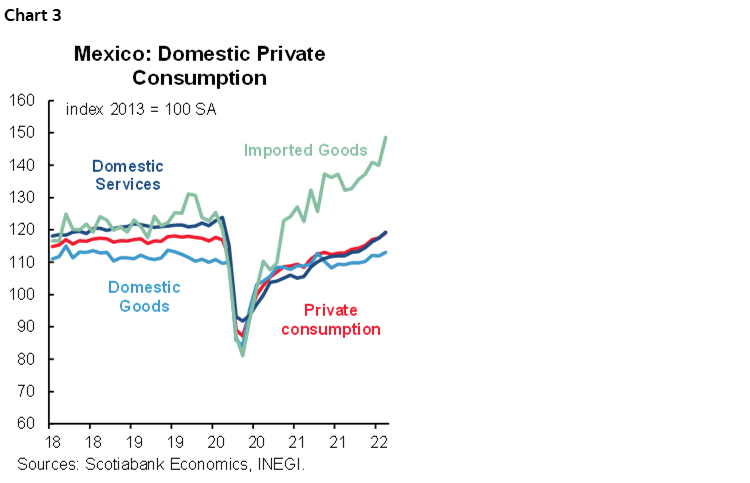