Temporary factors and genuine stabilization behind the recovery in economic activity.

On Monday, May 2, the central bank (BCCh) released data on monthly GDP for March, which expanded 7.2% y/y, above market expectations (Bloomberg: 6.2%) and in line with Scotiabank’s estimate (7.0%). Imacec grew 1.6% m/m (seasonal adjusted), recouping part of the contraction in economic activity observed since December (chart 1), largely owing to faster growth of services and a stabilization in goods production. 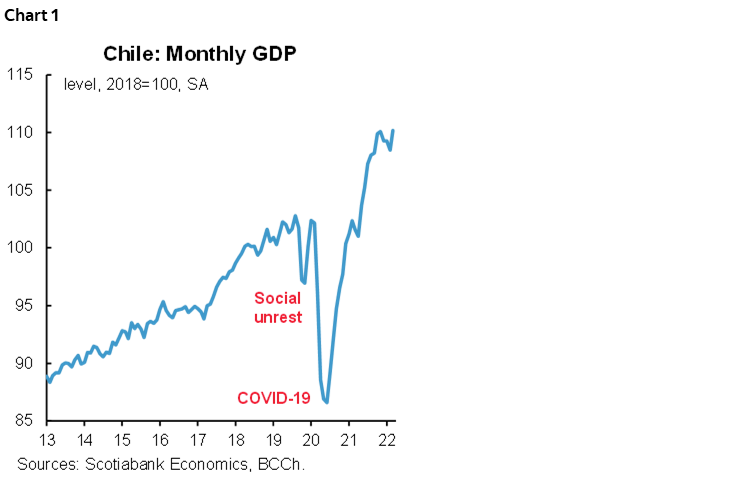 Temporary factors linked to the reopening and increased mobility, which we expected, were behind a surprising seasonally adjusted monthly recovery in all economic sectors. Even trade, which has slowed since late 2021, showed indications of stabilizing. While it is too early to say that the economy has returned to its long-term growth trend, there are signs that point in that direction.

In this respect, the quarterly contraction of 0.4% q/q reflects convergence towards trend levels of GDP. However, it also raises the risk of a moderate technical recession should Q2-2022 likewise reveal negative q/q growth. A technical recession would be consistent with our base case scenario, in which the second half of the year is crucial to our higher-than-consensus estimate of annual GDP growth in 2022 of 3%. Risks to our projection include external factors linked to the global slowdown as well as local factors coming from heightened political uncertainty.

All economic sectors expanded m/m in March, with the contribution of mining and services standing out (chart 2). Mining increased 6.6% m/m, recovering part of the drop in recent months. Despite this performance, prospects for the sector for the balance of the year are limited, given the persistent drop in grades and the drought, which affects production. Services grew 0.7% m/m, supported by personal and business services. As a whole, we estimate that the services sectors will sustain GDP growth this year, mainly thanks to the dynamism projected for investment. 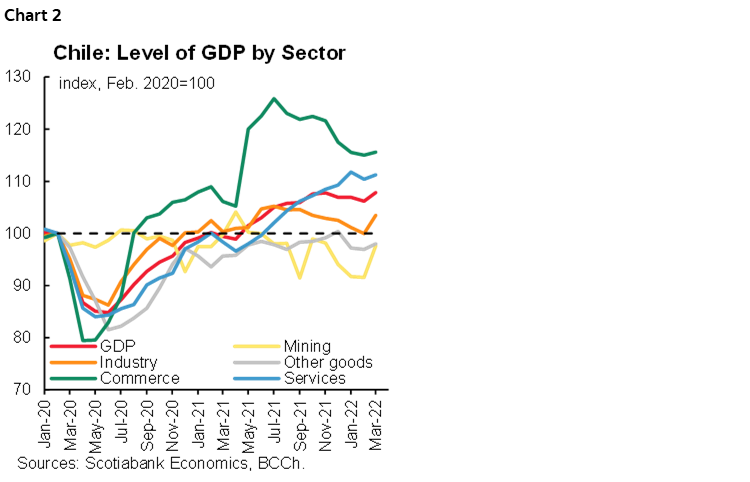 Against these developments, the BBCh’s scenario for 2022 GDP growth of 1.6% is coming under scrutiny, although the external scenario continues to be a challenge for the coming months. In the March Monetary Policy Report, GDP growth of 7.5% y/y was projected for the Q1-2022, compared to the upside surprise of 0.4 ppts with the 7.9% y/y growth for the quarter reported today. However, the international scenario looks worse than just a few months ago and is likely to dampen GDP expectations.

Employment data for March, released on Friday, April 29, show that in-person activities are contributing to job creation compared to one year ago, especially for the female population, though total employment remains 2.2% below pre-pandemic levels, while inactivity is 18.6% above pre-COVID-19.

The nationwide unemployment rate stood at 12.1%, while the rate of urban unemployment (main 13 cities) was 12.6%. Both indicators are lower than March 2021 levels of 14.7% and 16.6%, respectively. The services sector remained the main source of employment gains, especially for women. Job creation is also concentrated in the formal sector, which is absorbing people with technical and professional skills. Despite the gains in employment, there is still a gap relative to pre-pandemic levels.

In seasonally-adjusted terms, the unemployment rate stood at 12.0% nationally and 12.2% in urban areas, both increasing from the previous month’s levels of 11.9% and 12%, respectively (chart 3). In fact, employment contracted by 132 thousand jobs in March (chart 4). 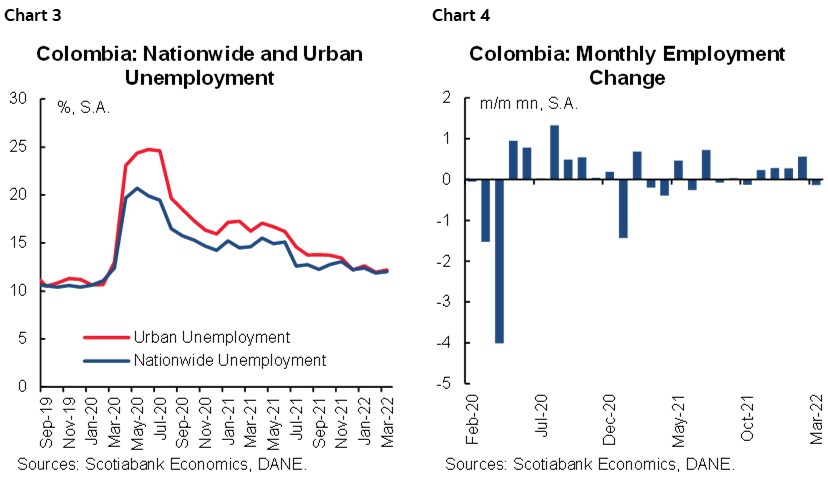 In terms of job quality, informal jobs accounted for 45.5% of national employment, below the March 2021 level of 47.9%, and in urban areas informal jobs fell from 46.8% one year ago to 44.3% in March 2022. It is worth noting that formal jobs contributed 75% of the job gains in March, which explains better employment dynamics for skilled workers.

We also saw further improvements in terms of the gender gap. In February, male unemployment stood at 9.6% (as compared to 11.8% in March 2021), while female unemployment stood at 15.6% (19%). Two out of three new jobs were filled by women, consistent with the trend in terms of the female labour force participation rate. This shows the clear effect of the return of in-person activities, especially schooling, which has allowed women return to the labour market.

Summing up, March’s unemployment rate improved compared with one year ago, reflecting the effects of reopening. However, total employment continues to be 2% below pre-pandemic levels, which together with informality remain key labour market challenges.