BRAZIL: BCB DELIVERS 100 BPS HIKE; WE ARE REVISING OUR TERMINAL RATE CALL TO 13.50% BASED ON THE RECENT SPIKE IN COMMODITY PRICES

As was widely expected, the BCB’s COPOM policy committee unanimously decided to increase the SELIC rate to 11.75% on March 16, as market expectations of inflation adjusted to recent spikes in commodity prices. All but six of the 43 economists surveyed by Bloomberg expected the BCB to hike the SELIC rate 100 bps in Wednesday’s meeting. Those not anticipating a 100 bp hike, expected an increase of 125 bps or 150 bps. The IPCA inflation print for February, published on Match 11, had come in slightly above expectations at 10.54% y/y (chart 1), relative to a consensus call for 10.47% y/y. At the same time, growth has been disappointing, with the latest print (January) of the monthly economic activity index coming in at a weak 1.3% y/y. 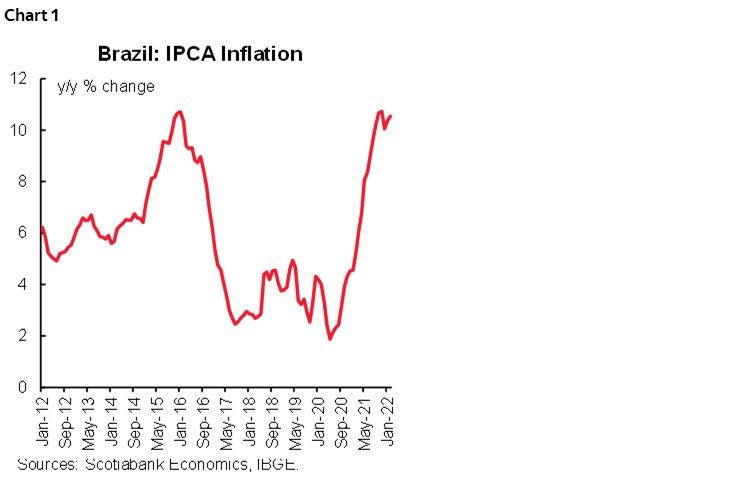 The Brazilian economy thus looks stuck in a borderline stagflation environment, with consensus GDP estimated at 0.5% for 2022, and inflation at 7.6%. As a single-mandate inflation targeting central bank, the BCB is prioritizing inflation, hiking rates from 2.0% in March 2021 to 11.75%. Markets are now discounting a terminal rate of 13.75%.

The BCB’s decision to hike 100 bps was driven by a general worsening of the inflation environment:

Looking at recent inflation by components, the Brazilian story has some similarities with other Latam countries, but also discrepancies:

Based on what is priced into financial markets, the SELIC rate is expected to increase through September 2022, reaching a peak of 13.75%, before the BCB begins to gradually cut rates in Q1-2023. However, markets discount a 12% SELIC rate by the end of 2023, which would suggest a real policy rate of 8.0% based on the consensus expected inflation at that time. This pricing is at odds with the economists’ consensus (Bloomberg), which anticipates a real rate of around 4% at the end of 2023.

Before the start of the Ukraine conflict, and the ensuing spike in commodity prices, we called for a terminal SELIC rate of 12.25%, to be reached in Q3-2022. However, the spike in commodity prices is likely to further pressure inflation higher, and risks contaminating the price formation mechanism, which in our view will push the BCB to tighten rates further. Consensus and Scotiabank anticipate that inflation will remain above target over a two-year policy horizon, meaning that policy setting will likely have to remain tight for some time to bring inflation back in check. Accordingly, we have raised our forecast of the SELIC rate, resulting in larger hikes in the near-term meetings to the following path (table 1).