On Tuesday, March 15, Colombia’s statistical agency (DANE) released its monthly survey of economic activity for January, with indicators pointing to a strong expansion as the economic recovery continues. The indicators are subject to base-level effects, however, because the country was in lockdowns in January 2021. DANE also released confidence numbers that showed that businesses are less optimistic owing to the effects of inflation on input prices, while prospects for employment creation remain cloudy. For now, we affirm our GDP growth forecast of 4.5% in 2022, reflecting the reopening of the economy and the transition to less expansive monetary and fiscal policies.

Manufacturing production increased by 15.1% y/y (above the market consensus +11.5%) and 0.7% m/m s.a. (Chart 1). Manufacturing was again led by the higher mobility-related sectors of the economy such as live entertainment events and in-person education. Employment continued to lag the recovery, showing a 4.8% y/y expansion. 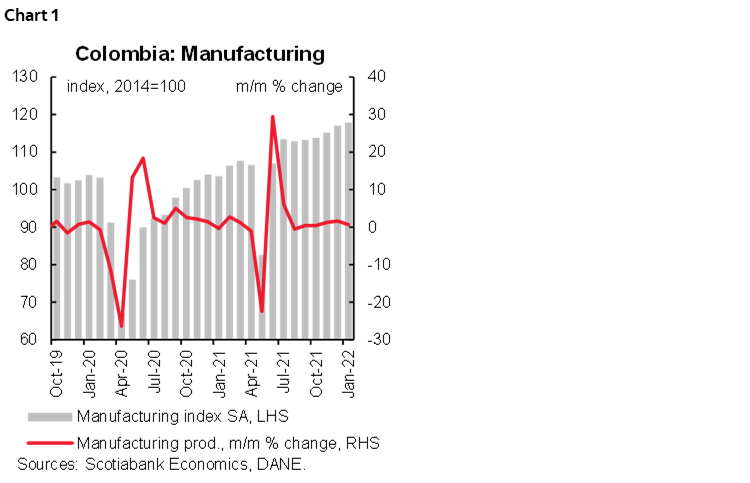 Compared with a year ago, the best performing sectors were beverages (+16.5% y/y), pharma products (+36.3% y/y), and paper-related products (+26.1% y/y), which accounted for 30% of the total expansion. Other sectors show the positive contribution of mobility and the return to in-person activities. In contrast, the worst-performing product was coffee processing (-20.6% y/y), which is attributable to lower coffee production, and oil refining (-1.8% y/y).

Regarding employment, pandemic-related job losses are concentrated in the clothing sector (-2.9%), representing 25% of total losses. Meanwhile, the fact that 68% of job creation in the last year was temporary employment, showing a lack in the quality of employment, is worrisome.

Retail sales expanded in January by 20.9% y/y (chart 2), slightly above the Bloomberg survey (+19.1% y/y), and well above employment growth of 2.2%. However, in seasonally adjusted terms, retail sales (excluding other vehicles) showed a contraction of 1.1% m/m, probably influenced by the December VAT holiday. Going forward, it will be important to see how retail sales evolve and to what extent consumers would adjust their habits to the higher and more persistent inflation. 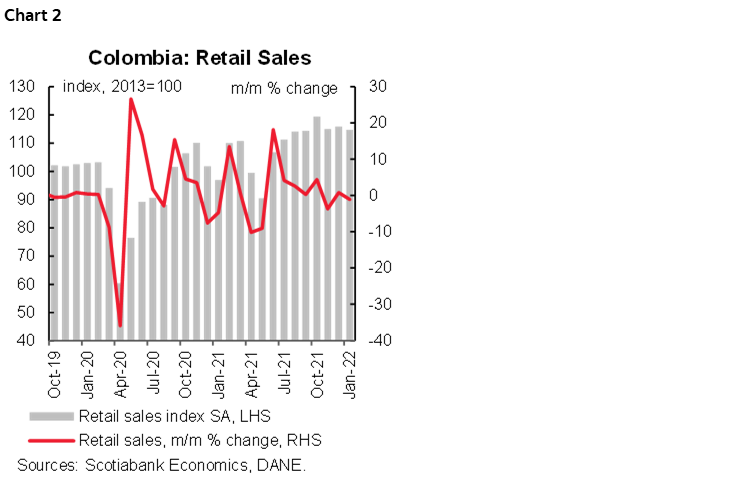 Compared to January 2021, the expansion of retail sales is largely explained by other vehicles (+70.6% y/y), gasoline (+16.6% y/y) and vehicles for domestic use (+30.4% y/y), and clothing (+71.4% y/y) which combined contributed 12.2 ppts to the increase in retail sales. These items are showing the effects of the normalization of economic activity. In terms of commerce channels, electronic transactions increased by 27.7% y/y and now represents 2.9% of total transactions.

Ahead of 2022, we expect a slower path of expansion in household consumption to more sustainable rates. However, a challenge would come if the impact of the inflation deteriorates further than expected the consumption capacity.

While all services activities expanded in January , the most robust growth was from the filming and TV show industry (+738.1% y/y), which still remains 3.4% below its pre-pandemic level. In terms of employment, 12 out of the 18 activities have fewer jobs than before the pracademic, with the biggest job gaps in private education (10.4% below the pre-pandemic level) and media-related sectors (more than 20% below pre-pandemic levels). Job growth is concentrated in logistic and IT-related activities.

All in all, activity indicators showed that Colombia had a strong start of the year, especially as the economy continues to normalize following the COVID-19 shock. That said, confidence surveys show that businesses are cautious about the future due to the impact of inflation on their margins. Meanwhile, the employment recovery could continue to lag, posing a risk to continued expansion.

We estimate that if Colombia's economic activity repeats the average performance of the last quarter of 2021, economic growth would be at least 4.7% in 2022. Nevertheless, we affirm our expectation of a 4.5% expansion for 2022, as we expect some impact from the current inflationary shock and by the transition to less expansive economic policies.

Tuesday, March 15, the central bank, BanRep, published its monthly survey of economic expectations which shows expectations for end-2022 increased by 100 bp following the strong upside surprise in February’s inflation. Inflation expectations for December 2023 are close to the target range ceiling (4%), pointing again to further indexation effects down the road, an unwelcome result for the central bank. At Scotiabank Economics, we view higher inflation coming mainly from a supply shock, which should reverse in 2023, leading us to expect lower inflation by the end of the next year.

BanRep’s expectations survey shows the monetary policy hiking cycle continuing with a 150 bps hike in March and a further 100 pbs increase in April, culminating with a policy rate of 7%, which is maintained through March 2023. Scotiabank Economics Colombia is also calling for a 150 bps hike in March. However, we see the tightening cycle peaking in June 2022, with a terminal rate now estimated at 7.50%, before starting to reverse in January 2023. 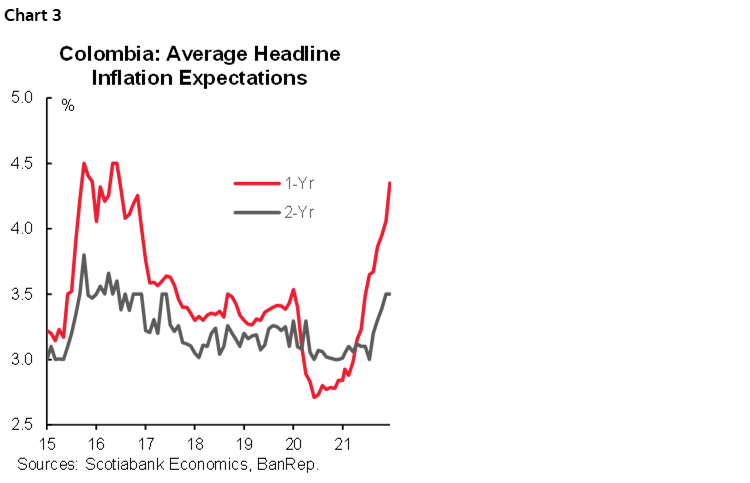 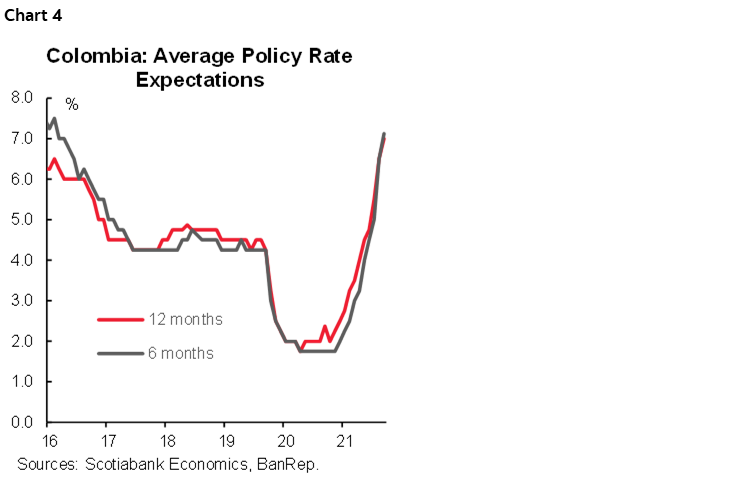 January GDP growth came in at 2.9% y/y, according to the National Statistic Institute (Table 2). This is not the type of growth that Peru could be showing, given strong metal prices and robust macro balances, but it is also not as bad as feared, considering political turbulence and the suboptimal business environment. January’s GDP represented a 1.4% m/m increase over December, and compares well, in year-on-year terms, with December’s 1.7% y/y growth (chart 5). 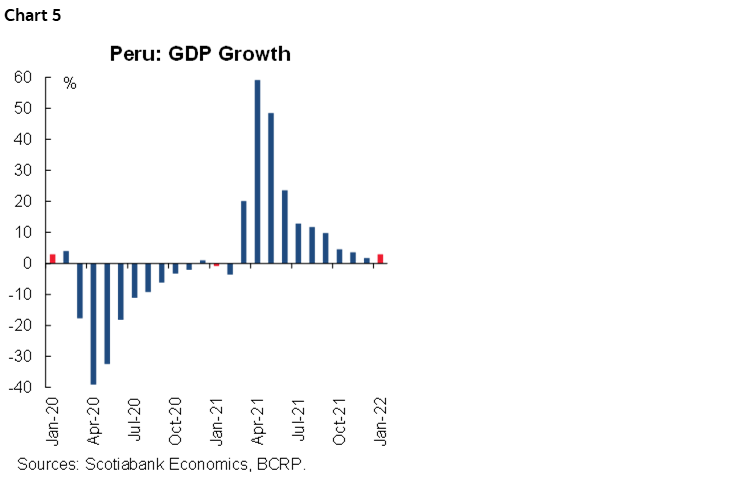 One key to January’s moderate but better-than-expected GDP growth figure is the easing of COVID mobility restrictions. The leading growth sectors in January were Hospitality (restaurants and hotels), up 30.4%, and Transportation, with 9.2% growth, which together accounted for 1.2 percentage points of January’s 2.9% GDP growth.

Given that even more mobility restrictions were removed in February, and that in March schools opened for the first time since 2019, plus anecdotal evidence that tourism is starting to revive, we expect growth in February-March to be mildly better than in January, coming in around 3% to 3.5% y/y. This would be positive, as it would support our forecast of 2.6% GDP growth for full-year 2022. We had been concerned that the conflict in Ukraine (the impact of which has yet to be felt in terms of growth), and heightened political instability, would be starting to put our forecast at risk.

Not everything was positive, however. Fishing declined 30.3% y/y, as the La Niña ocean current drove anchovy schools away. More important, Construction fell 0.6% y/y (chart 6). Construction was the leading driver of growth for a long time after the 2020 lockdown began to be lifted. It has ceased being a driver of growth over the last five months. Manufacturing (non-resource processing) increased a paltry 0.3% y/y, and declined by 1.7% m/m. We will need to monitor this further to determine whether declining real household income levels—due to inflation—are starting to take a toll on demand. 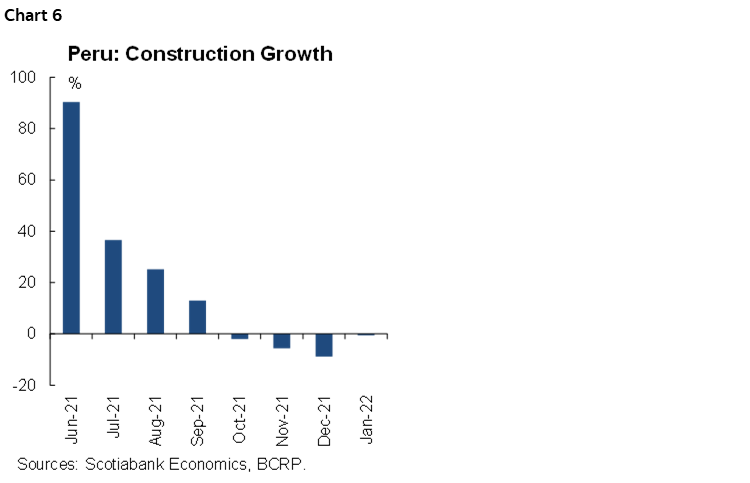 Agriculture rose a healthy 5.0% with nothing particularly unusual behind that result, outside of decent weather. Mining rose 3.6%, led by copper production, up 11.4%, presumably due to the coming-on-stream of the Mina Justa copper mine in mid-2021.