Latam Daily: Unemployment Rate Rises in Both Chile and Mexico

Salaried employment falls as self-employment grows, symptomatic of the weakness of the labor market.

On Wednesday, June 29, the statistical agency (INE) released the unemployment rate for the quarter ended in May, which edged higher to 7.8%, positively surprising the market consensus (8.1%). The increase relative to the previous three-month period was explained by employment gains (+0.2%) that were outpaced by labour force growth (+0.3%).

The unemployment rate rose slightly, though lower than the seasonally-adjusted rate (chart 1). In recent months, employment has shown a slightly better than usual seasonal pattern, and while labour force growth has been higher than employment, it has followed seasonal trends. Consequently, the unemployment rate has increased modestly during the last three moving quarters, averaging 7.8% in the period. 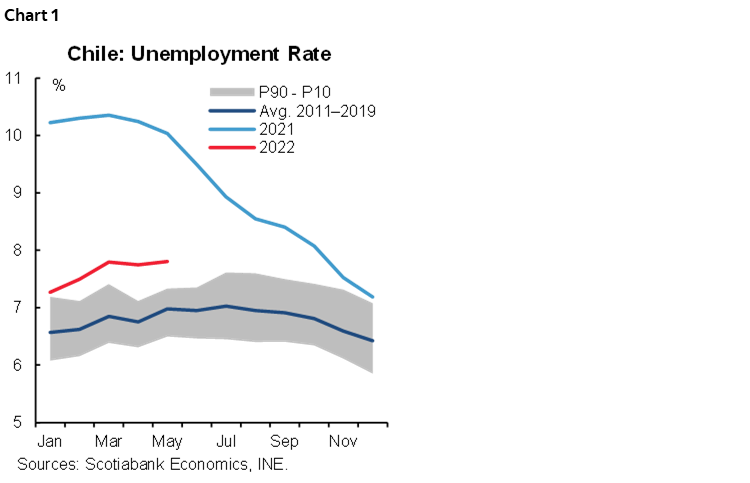 With the latest readings, the employment gap with respect to the pre-pandemic level remains closed at the formal level and was reduced to 209k jobs that still need to be recovered at the informal level (chart 2). By economic sectors, accommodation and recreation and culture show the greatest lag, while construction, commerce and manufacturing activity have already closed the gap. Meanwhile, salaried job creation has stalled, despite the Labour Family Income (IFE) given by the government. In May, the destruction of total salaried employment stood out, after several months of good performance that was supported by the existence of the IFE. For now, self-employment is offsetting the loss of salaried employment (public and private). However, its buffering role is not guaranteed hoping forward, and labour market performance will largely depend on the ability of services to sustain employment, mainly those that are still somewhat lagging, such as sectors related to tourism (accommodation, leisure and culture) or professional services. 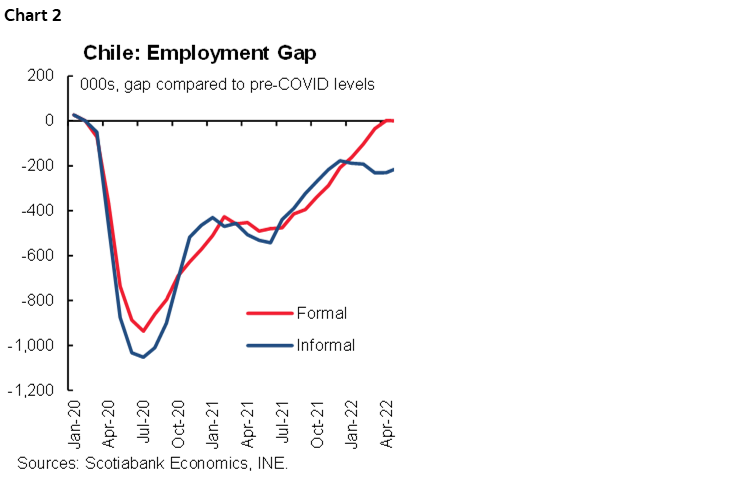 In sum, there is a recomposition in the job creation, which has broadened out beyond sectors producing goods to services, but is now explained by an increase in informal jobs.

According to the INEGI statistical agency, the unemployment rate rose from 3.03% to 3.27% in May (chart 3), somewhat higher than consensus (3.10%). The participation rate dropped marginally, from 60.06% to 59.60%. Within the employed population (which accounted for 57.1 million), the informality rate marginally rose to 55.60%, while the percentage of employed people looking to work more hours (i.e., under-utilized population rate) fell from 9.0% to 8.4%, still above pre-pandemic levels (7.4% on average in 2019), which may reflect some deterioration in labor market conditions. Looking ahead, we expect an increase in the unemployment rate in the second half of the year in line with stagnant investment, and a possible slowdown in economic activity.