Colombia’s Consumer Confidence Index (CCI) in July stood at -10.4 ppts, a decrease of -13.3 ppts over the previous month. The decline in consumer confidence is explained by a worsening in both components of CCI, with the index of expectations of future conditions falling from 17.5 ppts to 4.3 ppts (chart 1), and the index of current conditions dropping from -19 ppts to -32.3 ppts. The deterioration in the current conditions index can be attributed to persistent inflation. 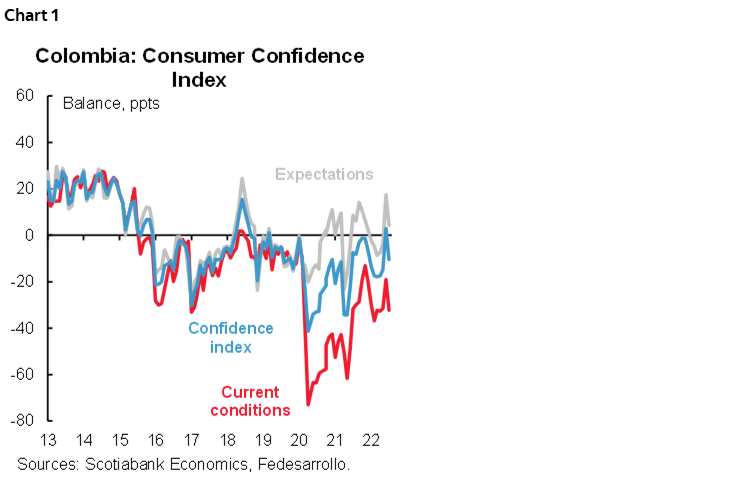 The expectations index declined by less than the current index as consumers think that the conditions of their households will improve in the coming year, and the conditions of the country will likewise improve, albeit to a lesser degree. The willingness to buy durable goods fell. The willingness to buy homes also declined (from -22 ppts to -35.3 ppts), while the willingness to buy vehicles registered a negative balance falling 3.8 ppts compared to the previous month to -59.9 ppts, explained by depreciation of the exchange rate and higher CPI inflation. Households’ perceptions about the future remain in positive territory but to a lesser extent compared to the previous month because of the uncertainty with respect to the announcements of the new government and expected inflation.

Looking at the July details:

Consumer confidence in July shows that consumers have become considerably more pessimistic about their current and future situation. Households continue to be affected by the effects of inflation, reducing their willingness to buy durable goods and vehicles (chart 2). Added to that is the impact of a more aggressive policy rate adjustment that should discourage credit and return consumption to more sustainable levels. We expect the central bank to continue its cycle of monetary policy tightening, so that by the September meeting we see the possibility of a 9.50% policy rate. However, we tilt our balance of risks upside, as we see inflation trajectories in the short and medium term well above BanRep’s upper target. 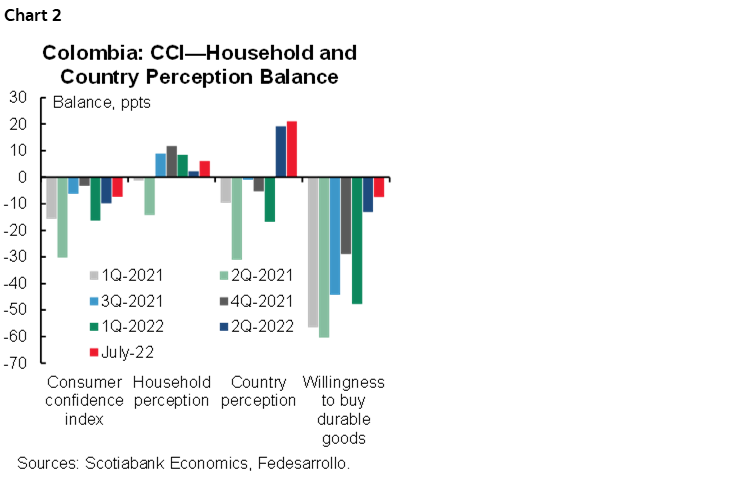 I. Private consumption fell during May led by the negative trend in consumer confidence

According to INEGI numbers released last Friday, the private consumption index for May fell -0.4% m/m in seasonally adjusted monthly terms, with decreases in all its components accentuating the negative trend that began in March of this year (chart 3). Within components, the fall in domestic goods (-1.1%) stands out. In its seasonally adjusted annual comparison, consumption decelerated 6.3% from the previous 8.0%, the slowest pace since November of last year. 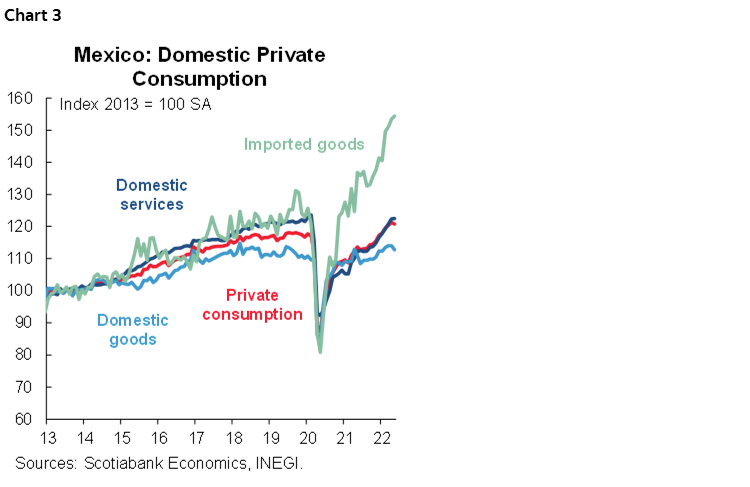 Consumer confidence figures for May had previously pointed to a slowdown in consumption and July’s consumer confidence reading was the third consecutive monthly decline, coming in at 41.3 ppts down from 43.0 the previous month. On a monthly basis, the current household economic situation component registered its second fall (-0.7 ppts) to 47.5, while the household expectations component fell -2.1 pts to 53.8 ppts, though still above the 50 ppts threshold of positive territory. The current country situation fell for the third time, by -1.3 ppts to 37.4 ppts, and the country’s economic expectations dropped for the second time, by -2.0 to 44.6 ppts, while the index of durable goods purchases decreased -1.1 ppts to 24.4. Consumer confidence fell for the second consecutive month in its annual comparison with a decrease of -3.02 ppts.

Looking ahead, we expect the lower growth outlook and the generalized increase in prices to continue to dampen consumer confidence, and therefore, lagging consumption in the coming months, but with modest annual increases for the rest of the year.

Also in May, gross fixed investment figures reveal a moderation on an annual basis from 7.1% y/y to 6.2% y/y nsa (chart 4). By components, machinery and equipment led the advance, accelerating from 11.6% to 15.4% y/y, still benefited by low comparison base effects. In particular, the domestic subcomponent rose 5.3%, while the imported subcomponent grew 22.8%. In contrast, construction returned to negative territory, going from 3.3% y/y to -1.3% y/y, owing to a drop in residential construction of -5.4%, and a more moderate pace in non-residential construction, of 3.5%. 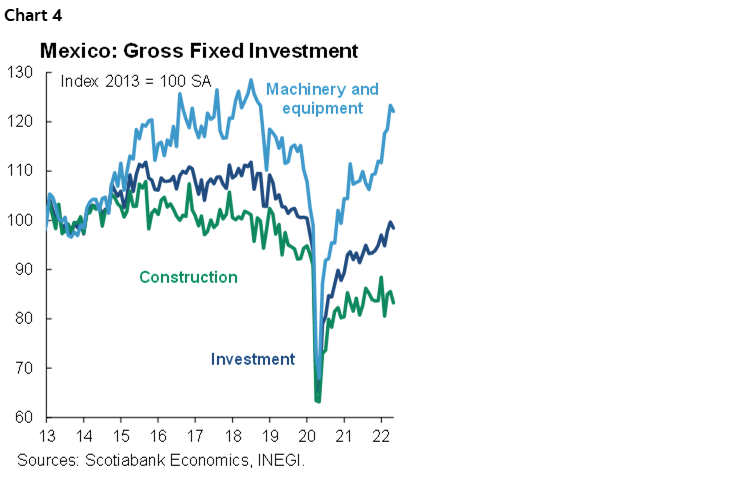 In the annual cumulative numbers, gross fixed investment has grown by 6.0% year-to-date. However, in the seasonally adjusted monthly comparison, it dropped -2.1% m/m during May, owing to a -1.0% m/m decline in machinery and equipment and a -2.7% m/m drop in construction.

As a result, gross fixed investment remains below pre-pandemic levels amid a prevailing uncertain environment foster by a complicated relationship between public and private sector. With this, we continue to consider the stagnation of investment as the main long-term risk for the economy, which despite annual advances supported by low bases of comparison remains on the negative trend initiated in the last months of 2018, following the cancelation of Texcoco airport.

PERU: THE NEW CABINET IS THE SAME AS THE OLD ONE (WELL, MOSTLY)

Another day, another Cabinet. On Wednesday, August 3 the Head of the Cabinet, Aníbal Torres, resigned. The resignation was abrupt and unexpected. It was also not accepted. President Castillo met with Aníbal Torres and, on Friday, August 5, announced that Torres would continue at his post.

However, the resignation apparently did prompt a minor Cabinet shake-up, with changes at six of 18 ministries. To put this in perspective, there have now been over 60 Cabinet appointments, or reappointments, in the little over a year of the Castillo Regime.

The most significant change was the designation of Kurt Burneo as Finance Minister. He replaces Oscar Graham. Minister Burneo is well known in the local academic world as a Professor of Macroeconomics and Public Finance at a number of local colleges. He also has had quite ample experience in public office and public policy. He has been a Board member at the central bank, BCRP (2001–2006), Minister of Production (August–December 2011, government of Ollanta Humala) and Vice-minister of Treasury at the Ministry of Finance (2001–2004). Burneo has also been Peru’s representative at the Inter-American Development Bank in Washington D.C.

Thus, a first impression is that Burneo is experienced enough, and knowledgeable enough, to manage his new post. In fact, one of the first statements made by Burneo is that he would seek to reestablish confidence, accelerate growth, and generate more jobs of greater quality.

A few words of caution may be in order, however. Although Minister Burneo will be one of the more experienced members of the Cabinet, his experience is not recent. His most recent position of note in public administration was in 2011.

He has, also, long been associated with the centre-left. Thus, although Burneo may be sincere in his concern over confidence levels, it is not clear how this reconciles with his left-leaning past. Burneo has not been a public figure lately, and his thinking may have evolved. A likely scenario is that he would wish to give more weight to social issues, while trying to promote, or at least not alienate, private business at the same time.

Kurt Burneo is more political and outspoken than former Finance Minister Graham was, and may try to wield a greater influence within the Cabinet. How this will work out will largely depend on the type of relationship he forges with cabinet head Aníbal Torres.

Whereas former Minister Graham was an institutional figure, having emerged from within the Ministry of Finance, Minister Burneo has a view that is likely to be less institutional. This could lead to a new agenda and to changes in economic policy. We do not expect the changes to be radical, but they could be somewhat imaginative.

All in all, the new Aníbal Torres Cabinet is very similar to the old one. Of the six Cabinet changes, only three involve new Cabinet members (Burneo, Rodríguez and Paniagua). We do not include Betssy Chávez in this list as she was Minister of Labour until fairly recently (October 2021–May 2022). The caveat is Kurt Burneo, who may be different in policy and personality than former Minister Graham.

It is not clear why President Castillo decided to change some members of the Cabinet, once it was evident that Minister Torres was no longer leaving. There is, for example, little reason to believe that this Cabinet will help improve relations with Congress. In fact, at least one new issue may have emerged, with the controversial designation of Betssy Chávez as Minister of Culture. Chávez had been ousted by Congress in May for negligence after she authorized a strike by air traffic controllers at the height of the tourist season. Another designation that raises eyebrows is Geiner Alvarado at the very sensitive Minister of Transportation. This is a ministry that handles large amount of resources for investment projects, but which also carries a heavy weight of corruption allegations.

The political dimension of the changes is intriguing. The first question is just what happened? In particular, why did Aníbal Torres resign, and why was his resignation then not accepted? And, was former Finance Minister Oscar Graham removed, or did he resign?

Aníbal Torres’ resignation was apparently real, not posturing. He stated in his resignation letter that he wished to return to the life of academic investigation. Thus, one hypothesis is that he was tired and yearned for a quieter life. Maybe, but one wonders if he wasn’t trying to distance himself from a government that he generally supported, but was so fraught with corruption allegations as to make him uncomfortable.