I. Preview of the President-elect Petro’s inauguration

Roughly one month after the run-off presidential election, President-elect Petro will take office on Sunday, August 7th. His administration represents a marked change in traditional politics, since it is the first led by a president broadly considered to be a leftist. Every announcement has therefore been in the market’s spotlight. So far, the new Congress, the composition of the Cabinet, and possible reforms have been the main milestones for markets.

July 20 was the day that the new Congress took office, an event in which each party declared its position with respect to the new administration, with only one party (Centro Democrático) declaring itself as an opposition party. However, by law, the parties have until September 7 to define their positions and have the option of changing their position only once during the four-year mandate. The incoming Petro Administration has adopted a conciliatory attitude and is open to dialogue with all parties.

The Cabinet is still incomplete, with only eight out of the 18 portfolios appointed. As a result, considerable uncertainty remains with respect to the composition of the government. Additionally, the directors’ names of several public institutions have not been named, including the Dane statistical agency.

However, a key appointment, the Ministry of Finance, has already been made with the appointment of Jose Antonio Ocampo, a renowned economist, whose nomination helped to calm markets. Ocampo is talking sensibly about tax reform, noting that it will be structural in nature, and that reforms would be gradual and consistent with the rule of law. Expected revenues have moderated, as Ocampo indicated he wants to collect more than COP 45 trillion, while the text that will be filed with Congress on August 8 would target revenues of around COP 25 trillion.

Key points of the tax reform include:

In addition to tax reform, there are also proposals with respect to rural land reform, education, the health system, and the pension system. However, they are not a priority in the short term. Meanwhile, the president-designate of the economic commission of Congress has said that he hopes in this first legislature to address three important projects for the beginning Petro Administration: tax reform, Budget for 2023, and national development plan.

Overall, there has been a tone of moderation in the speeches of the president-elect, who has been open to dialogue with all social sectors and especially with Congress. For now, we think that the Sunday, August 7th inauguration will not generate an overreaction or higher risk premia in markets. In the near term, the focus will be on the tax reform bill and pending appointments.

Annual headline inflation stood at 10.21% y/y, up from 9.67% y/y in May (chart 1), and the highest since the inflation targeting regime was implemented. In monthly terms, food inflation again accelerated, increasing 1.1% m/m from the previous 0.65% m/m. Utility and rental fees were the second main contributors, with the reversal of the VAT holiday and higher gasoline prices also contributing. 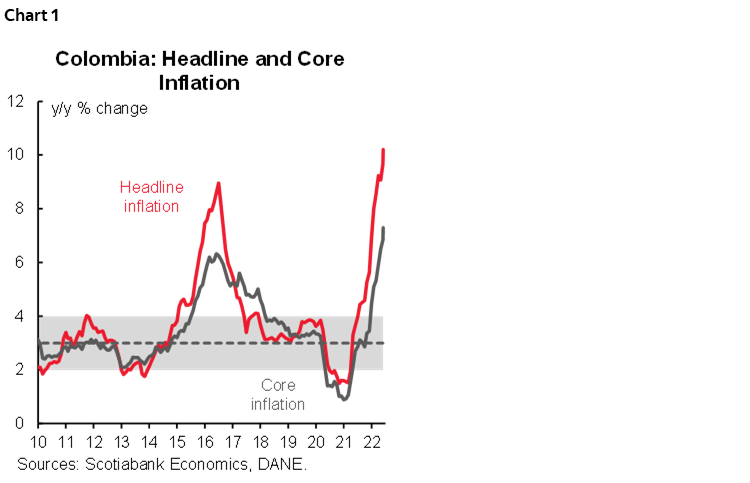 Core inflation rose again, from 6.84% y/y to 7.29% y/y, the highest level since December 2003, while ex-food and regulated goods inflation came in at 6.44% y/y (up from 6.06% of the previous month), the highest level since 2009. Food inflation was the main contributor, while core metrics show other sources of pressure, such as rental fees, some services, and tradable goods, especially vehicles, which is now the fifth main contributor to the inflation.

July’s CPI print would, in our opinion, put again pressure on the central bank ahead of September’s meeting. Our projection is of a 9.50% terminal rate, but there is a strong upside bias. We expect inflation to continue oscillating around 10% in coming months; however, high inflation at year-end will again trigger strong indexation effects ahead of 2023 amid the minimum wage negotiation. As BanRep mentioned, uncertainty remains, though high inflation could make it go farther than expected in the hiking cycle.

Looking at July’s numbers in detail, 11 out of the 12 components of the CPI index contributed to higher inflation (charts 2 and 3). 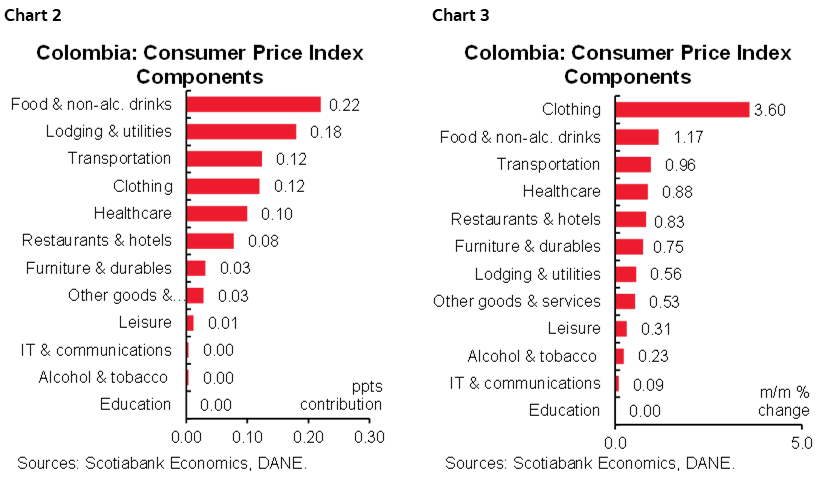 The main highlights are:

Looking at annual inflation across major categories, goods inflation increased from 8.30% y/y to 9.52% y/y owing to the VAT holiday reversal and higher international prices, while services rose slightly, from 5.21% y/y to 5.26% y/y, a more moderate increase that could point to weaker economic activity and private demand. Regulated-price inflation increased 69 bps to 10.49% y/y.

All in all, July inflation again surprised on the upside, largely as a result of higher-than-expected food inflation, but also higher tradable goods prices. Services inflation is posting lower increases, which could be associated with a moderation of the economic activity. Regardless, July’s result puts pressure on the central bank as headline inflation reached the highest level since the start of the inflation targeting regime, with no signs of a reduction. In this respect, while our forecast calls for a 50 bps hike in September to bring the policy rate to 9.50%, there is an upside bias on the terminal rate which would be realized if inflation continues to rise.