March CPI surpasses even the highest projections and puts the central bank in check (again).

Before the release of the March inflation rate, surveys and financial markets anticipated a figure of no more than 1.2% m/m, while the central bank’s (BCCh) baseline scenario projected a rate of inflation of 1.1% m/m. In this respect, the 1.9% figure is a significant upside surprise. Accordingly, we expect the BCCh to cautiously evaluate the appropriate policy settings going forward, as it previously indicated that it was close to the terminal policy rate of this tightening cycle.

March inflation of 1.9% m/m (9.4% y/y) reflects a general increase in prices across volatile items, such as food and energy as well as at the core level (chart 1). In this regard, the diffusion of inflationary pressures (percentage of products with price rises) in the CPI reached 70%, its highest value since the current CPI basket was introduced (chart 2). Diffusion remains at the top of its historical range, both for the CPI core goods and services, at 62.3%% and 71.3% respectively. 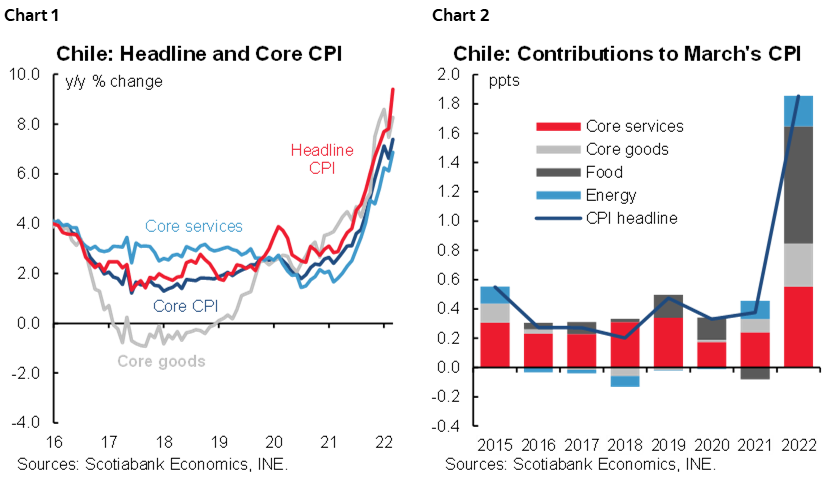 However, analysis of the diffusion of CPI core goods and services does not reveal a deterioration relative to prior to the March CPI release. In general, a stabilization trend is emerging for goods prices, while services prices continue to display high diffusion—though this is explained in no small part by the relaxation of mobility restrictions in March.

A key question is what March inflation implies for the terminal monetary policy rate in this tightening cycle. In our view, the BCCh is likely to acknowledge the upside surprise in its May monetary policy meeting and consider two crucial aspects for monetary policy:

1. While the surprise to headline CPI level is 0.8 ppts above BCCh’s projection of 1.1%, excluding volatile components from the CPI (its preferred measure to assess inflation pressures) the surprise is 0.3 ppts given that the central bank incorporated an increase of 1.2% in its baseline scenario (versus 1.5% m/m actual).

2. As the March outcome may be a “one-off” surprise to its base scenario, mainly at the non-volatile level, it could be read as requiring a change in its forward guidance, rather than a need to move faster to the monetary policy rate indicated in the centre of its policy rate corridor, which would allow the BCCh to wait for more information to assess changes in forward guidance at the June meeting.

Accordingly, we are revising up our expectation of a rise in May from 25 bps to 50 bps. At the same time, the March Monetary Policy Report projection for annual inflation of 5.4% is now out of range, while our forecast of 6.6% is more likely. We retain this projection, anticipating a moderation of CPI inflation in April and May, since in our view the March figure was fueled by a set of specific rises that are unlikely to be repeated in the coming months.

On a political level, the March inflation outcome could impact the government. After revealing a USD 3.7 bn fiscal aid package yesterday with a focus on lower-income families and SMEs, financed with budget reallocations and without further sovereign debt issuance or affecting the fiscal deficit, voices are likely to emerge from Congress asking for additional aid. We believe that the government will be able to increase the size of the aid and take this fiscal package up to USD 4 bn. Financing additional expenses would require withdrawals from sovereign wealth funds (ESSF) and/or review of the spending spaces provided by the higher copper price within the fiscal rule (review the trend price of copper implicit in the fiscal rule). 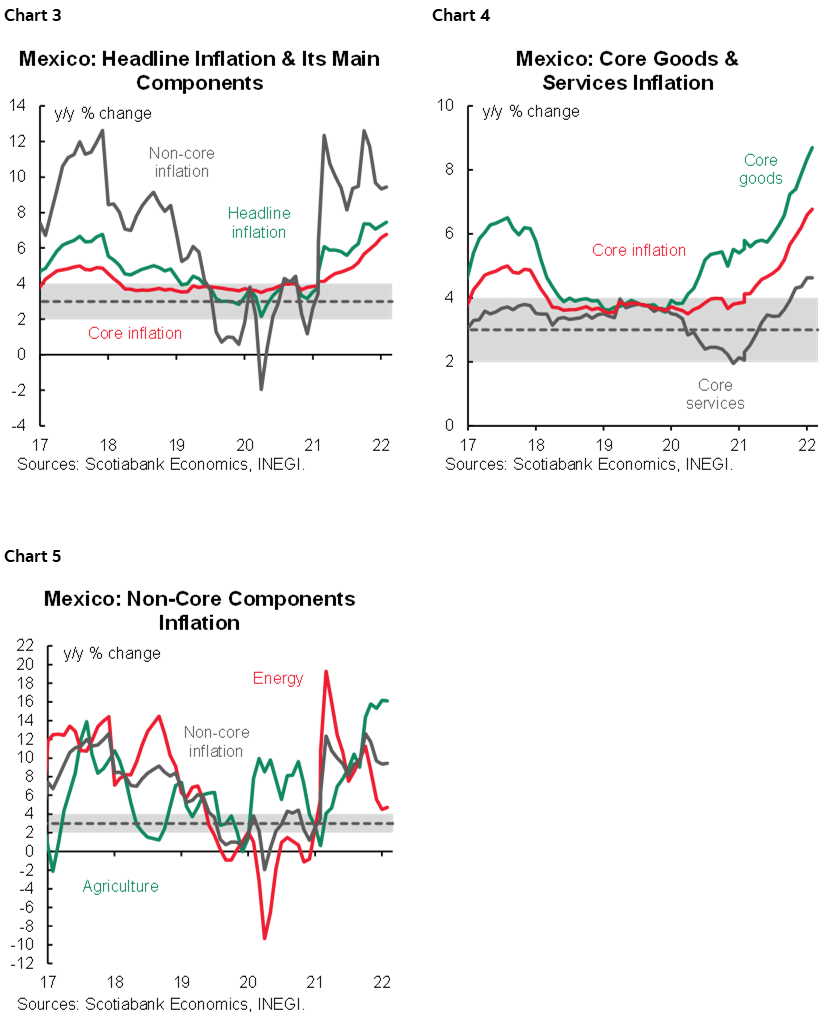 Furthermore, inflation expectations for the end of the year continue to deteriorate, as participants in the Citibanamex Survey now expect 5.99% headline inflation y/y, up from 5.88% previously. In this regard, it is worth noting the concerns raised by the Banxico’s Board in the minutes of the March meeting (link to minutes flash). As for the monetary policy implications, we maintain our outlook for a fourth rate hike of 50 basis points at the May monetary policy meeting. By the end of the year, we expect a rate of 8.25%, with upside risks of further rate hikes on a data driven approach.

The Board of Peru’s central bank (BCRP) raised its key interest rate by 50 bps to 4.50% on Thursday, April 7, in line with the market consensus (Bloomberg), the interest rate swap market, and Scotiabank’s forecast. The decision is consistent with the more aggressive stance that the BCRP has adopted since the beginning of the year and continues the normalization of monetary policy that began in August 2021. However, since the BCRP statement did not focus on economic activity and dispensed with conditional wording used in previous communications, such as “temporary” or “if necessary,” in our view, it has a more hawkish tone. After the decision, Peru’s monetary policy interest rate (4.50%) remains one of the lowest in the region.

Our forecast has the policy rate at 5.00% at the end of 2022 as presented in the Latam Weekly (March 18, 2022), consistent with our inflation forecast of 6.4% for the year. We maintain an upward bias given inflationary pressures are expected to remain.

The BCRP statement expresses greater concern about inflationary pressures and cautions that inflation will take longer to reverse. It highlights the central bank’s concern over surging international energy and food prices, exacerbated by the Russian invasion of Ukraine, which have pushed inflation to 6.8% y/y in March. Reflecting these effects, 12-month inflation expectations rose significantly in March, from 3.75% to 4.39%, remaining above the inflation target range for the ninth consecutive month. The rise in inflation expectations exceeded the 50 bps hike in the reference nominal rate, so the real rate fell after five consecutive months of increases, declining from 0.25% to 0.11%. As a result, the monetary policy stance remains expansionary as it is below the 1.5% rate real neutral (chart 6). Year-on-year inflation should begin to decline in July, as base effects kick-in and factors on inflation, such as the FX rate and international prices of energy and commodities, unwind. The BCRP now expects inflation to return to the target in Q2–Q3 2023 in contrast to the March statement, which projected a reversal in Q1–Q2 2023. 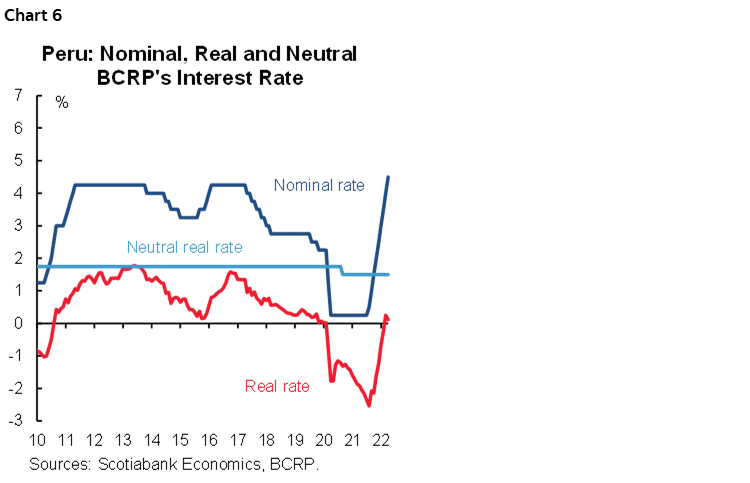 Given the persistence of inflationary pressures, the BCRP reiterated that it will remain attentive to new information regarding inflation expectations and the evolution of economic activity, noting that it is prepared to consider additional measures to ensure inflation returns to the target range. The magnitude of future hikes will depend on the evolution of inflation expectations and economic growth. We also expect the BCRP to evaluate complementary measures in May, such as an additional increase in reserve requirements. In this regard, we also anticipate that the BCRP will continue to be comfortable with the trend PEN appreciation (7.1% YTD), which it considers necessary to offset inflationary pressures.

The quantity of money (M3) contracted -4.3% y/y in February, falling for the third consecutive month, as part of the monetary normalization process (chart 7). However, the growth of loans continued to expand, going from 6.2% y/y in January to 6.6% y/y in February. 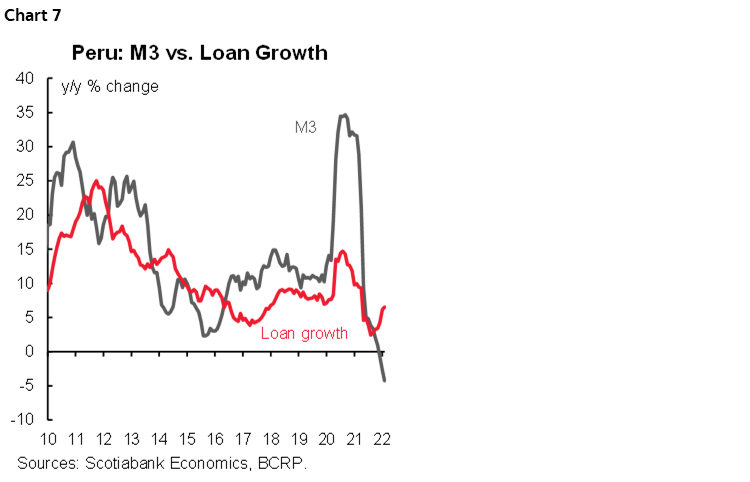