On Thursday, April 28, the statistical agency (INE) released the unemployment rate for the quarter ending in March, which rose to 7.8%, in line with our expectation, again owing to higher labour force growth (0.7% m/m) compared to that of employment (0.3% m/m). Given that dynamic, and the impact of seasonal factors, it should come as no surprise that the unemployment rate has risen (chart 1) as labour market participation continues to recover in-line with the increased openness of the economy. 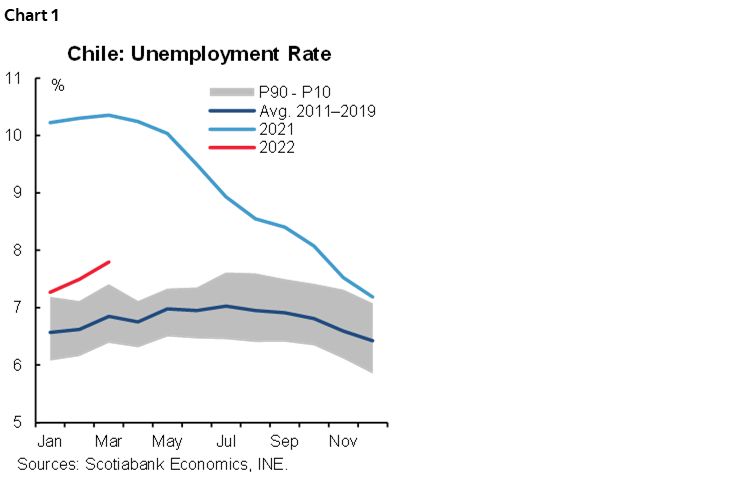 Job creation, while continuing, has not kept pace with the recovery of the labour force. In this sense, we consider that there is no deterioration in the labour market, since the low unemployment rate in the second half of last year reflected obstacles to participation in the labour market linked to mobility restrictions, as well as the effects of fiscal transfers and pension withdrawals.

There are still 266k jobs to recover compared to the level of employment prior to COVID-19. In the quarter ending in March, 29k jobs were created (22k men and 7k women). This pace was higher than that observed in seasonally adjusted data for March and is attributable to the strong increase in private salaried employment, especially in services and mining. However, there is still a long way to go to return to the pre-pandemic employment rate, which stood at 54.9% in March, well below the 58% forecast for this month in a typical year. Under this metric, there are around 480k jobs to be created to return to expected employment levels for the size of the Chilean labour market.

Once again, the strong creation of formal jobs in the quarter ending in March stands out (69k), compared to the loss of informal jobs (40k) (chart 2). By economic sector, formal job creation was concentrated in accommodation (18k), health (14k), professional activities (12k), and administrative services (12k). The same sectors also account for smaller decreases in informal employment, which could be indicative of a process of re-composition in jobs, from informal to formal, possibly encouraged by the labour subsidy (IFE laboral) provided by the government. 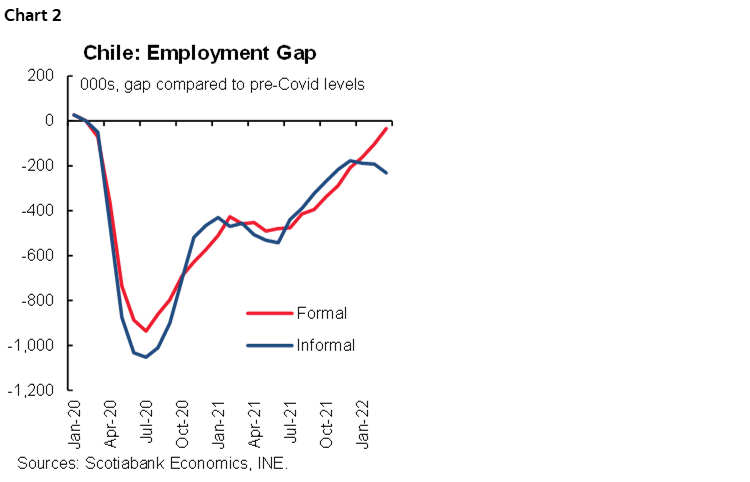 On Friday April 29, statistical agency (INE) released the industrial production index for March, which expanded 0.8% y/y, above market expectations (Bloomberg: -3.9% y/y). The figure is explained by a superb performance of the manufacturing production, which grew 3.3% y/y (+2.9% m/m), surpassing market expectations (Bloomberg: -3.0% y/y), and the rebound in mining production (-2.2% y/y). According to INE, retail sales increased in March by 11.3% y/y, in line with our projection. In our view, these indicators support a monthly GDP expansion of 7% y/y in March, which is consistent with a Q1-2022 GDP growth of 7.8% y/y (-0.7% q/q).