On Monday, April 18, the Colombian Statistical Agency (DANE) released the February 2022 Economic Activity Indicator (ISE), the main proxy for GDP, which expanded by 8.1% y/y, well above the Bloomberg market consensus of 7.2% y/y. Activity increased across all sectors of the economy, with the secondary and services sectors boosted by a monthly base effect in the financial sector reflecting a large one-time payment by an insurance company in January (chart 1). On a monthly basis, economic activity expanded 1.6% m/m (chart 2), comparable to the pace in the last quarter of 2021. Compared to its pre-pandemic level (February 2020), the activity indicator showed growth of 5.6%. 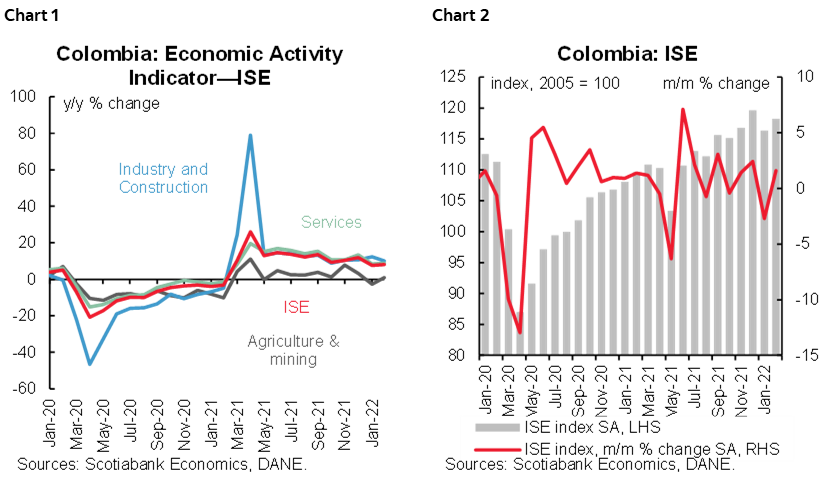 February’s result showed a positive outcome in the consolidation of economic activity growth, offsetting the negative effect of the previous month. However, there were also signals pointing to inflation weighing on some activities that should be monitored in the months ahead.

PERU: FEBRUARY GDP GROWTH OF 4.9% IS NOT QUITE AS STRONG AS IT LOOKS

February GDP growth came in at 4.9%, y/y (chart 3), according to data released on April 15 by the National Statistics Institute, INEI. On the face of it, the number seems strong, and it is the highest rate of growth rate in five months. However, looking at the figure in more depth shows a slightly different picture. February’s y/y growth was off a low comparison period, as February 2021 was a period of COVID-19-related mobility restrictions (chart 4). Unsurprisingly, the sectors with the greatest growth this year were those most affected by the restrictions last year (table 1). These sectors include hotels & restaurants, up 93% y/y in February, transportation (15.8% y/y), and, to a lesser extent, commerce (7.5%), telecom (5.7%), electricity (4.4%), and manufacturing (6.3%). 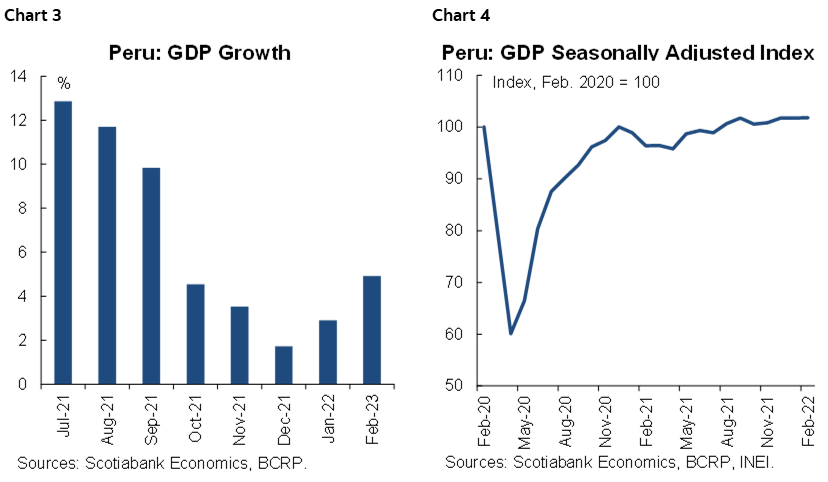 In month-on-month terms, things were less exciting. Aggregate GDP growth was flat, m/m, and sector growth rates were mixed. Outside of fishing, electricity, telecom, financial services and transportation, each of which rose a robust 0.6% to 1.1% in month-on-month terms, all other sectors showed low or negative growth compared to January, the month before.

On the plus side, oil & gas growth of 13% y/y was led by a nearly 41% increase in oil output. This increase is not a temporary effect, as it largely is the result of operations that had been down due to maintenance and repairs coming back on stream.

Of particular concern is construction GDP, which declined 2.5% y/y, falling for a fifth consecutive month. This is in line with an 18% y/y decline in public investment, and probably also reflects low private investment, both in infrastructure projects and in residential construction.

Another sector to keep an eye on is metals mining. The decline in February was mainly in zinc-lead-silver mines, whereas copper output was down only 0.9%. Note, however, that we expect the impact of unrest on copper output to be much larger in March.

The upshot is that the nearly 5% y/y growth that took place in February is likely not sustainable. March will be the last month with a favorable comparison base, although less so than in February because mobility restrictions were in place only for half of March in 2021. Education also came back in force in March–April 2022, whereas schools were still shut in 2021. This should add to growth. At the same time, March 2022 was fraught with social unrest, including nearly a week of blocked roads, and a one-day lockdown decreed by the government to cool down protests. Also of significance, operations at the Cuajone mine (Southern Peru), which represents 7% of Peru’s copper production, were halted throughout the month of March this year. Finally, public investment fell 7%, y/y, in March.

It’s hard to gauge just how much these issues will compensate the favorable base, but the likely balance should put GDP growth in March in the vicinity of 2% to 3%, y/y.