ON DECK FOR TUESDAY, JANUARY 24

A mild risk-off tone is being applied across asset classes this morning. I think a significant driver is nervousness into US tech earnings given uncertainty behind the degree to which layoff notices portend earnings gloom. Microsoft kicks it off in the after-market today and it accounts for around 5% of the S&P, second only behind Apple that arrives next week along with Meta, Alphabet etc.

Otherwise, the flow of macro information is incrementally positive. A batch of global PMIs generally improved in 3 out of four countries’ cases with the UK being the sole exception perhaps as that country continues to grapple with the negative terms of trade shock arising from its Brexit and failure to achieve freer trade agreements. Two of the countries climbed back above 50 readings for their composite PMIs that divide expansion (above) from contraction (below), but only barely so.

In general, the readings tentatively support the narrative that favours less downside risk to the global economy than thought a short time ago. There is a lot of new information to inform fresh forecasts into the new year including a better starting point for the US economy that appears to have blown away expectations for Q4 GDP, developments in China that pivot from near-term downside toward better prospects as the year unfolds, less of a European energy shock than feared and easier financial conditions on balance. We should all be looking at forecast upgrades for major regions of the world economy by way of incremental changes toward less negativity.

Still, with some modest exceptions, that generally wasn’t enough to impress markets that may have already digested at least some of the main takeaways from the PMIs. N.A. equity futures and European cash markets are all slightly in the red, and while most of Asia is shut, Tokyo was up by about 1½% partly on stronger PMIs. Sovereign bonds range from flat US Treasuries to slightly richer European benchmarks. The USD is little changed as yen strength (again, PMIs) and a firm CAD ahead of the BoC tomorrow offset weaker sterling (weak PMIs) and other European crosses plus MXN.

Here’s the PMI round-up and also check out charts 1–5. 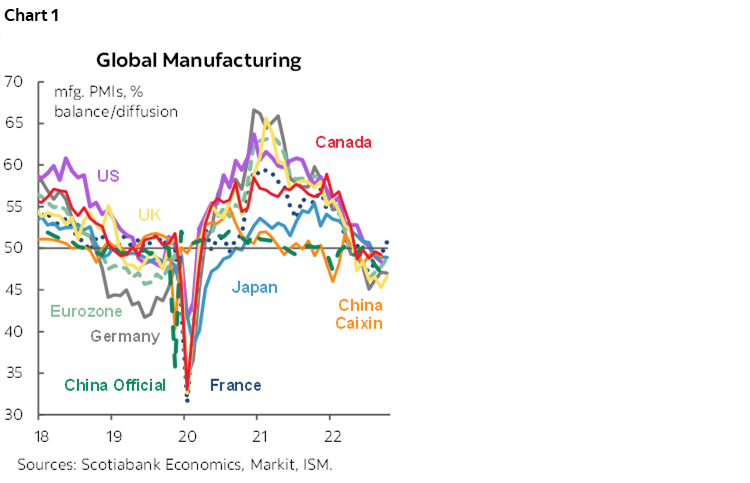 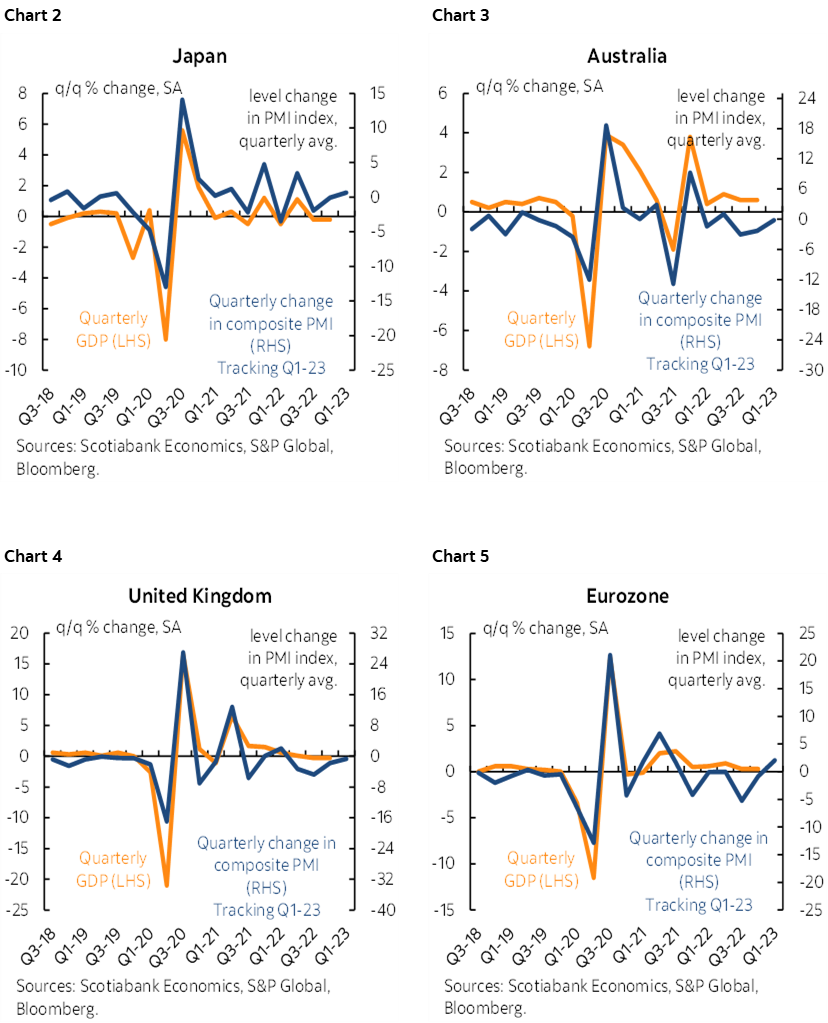 The US releases S&P PMIs at 9:45amET and we’ll see if they follow the general global pattern while nevertheless being the Fed’s least preferred measures (versus ISM) because today’s batch covers global operations of US firms and not just domestic operations. The Richmond Fed’s manufacturing index for January will also be released 15 minutes later.

CANADIAN JOBS AND THE BANK OF CANADA

The same old narrative has resurfaced on the eve of the Bank of Canada’s decision that posits they shouldn’t be hiking because it will weaken the job market. I think this narrative is extreme and worth pushing back against. Some of the points offered below will draw upon points I’ve previously made such as here.

Ya Missed the Memo!

First, the logic that you shouldn’t hike because it might slow, or reverse job gains is an entirely false starting point to begin with. It either reflects a poor understanding of macroeconomics and monetary policy or it seeks to opportunistically politicize opposition to what the Bank of Canada is trying to do in bringing inflation under control and either way is unflattering.

That’s because one reason for hiking as part of an effort to cool inflation is to open up some slack in the economy and in the job market. In an augmented Phillips curve framework, a contributing driver to softer inflation has to be some slack in the job market such as through a higher unemployment rate compared to multiple measures of historic tightness at present. That can mean either slower employment gains relative to growth in the workforce or outright employment declines.

We don’t know the degree to which this relationship holds among other drivers as the sensitivities can change over time and under different conditions and is hard to observe, yet there is a great deal of evidence to support the existence of some degree of inverse relationship between inflation and the UR over time.

Canada’s job market is on fire and if it isn’t cooled down then there will be less chance at successfully bringing inflation durably lower. Employment is at a record high. The unemployment rate is at a record low. Canadian labour productivity now versus 2019 is terrible and among the worst in the world. Trend wage pressures are rising. Job vacancies are still over 900k and hence nearly double pre-pandemic levels. All of that is hardly a recipe for getting inflation under control.

Second, the timing of higher borrowing costs is still wrongly depicted as having only started in March of last year when the Fed and BoC finally started to lift off. Market-driven borrowing costs were rising well in advance of this because markets were not believing central banks as they dragged their feet and took forever to wake up to inflation.

Canada’s 2-year yield began more aggressively pricing BoC hiking in October of 2021 and had risen 125bps off the ¼% trough before the BoC even launched its first rate hike. We’re now a cumulative 340bps higher on the two-year yield from the trough. Rates have been rising for about 15 months or so but are now pricing aggressive BoC policy easing. If such policy easing is delivered or further amplified by a pause tomorrow, then in my opinion, we risk landing back in heated housing markets within persistent inflation risk and tight job markets driving cost and inflation pressures.

…And We Should Have Seen Negative Effects on Jobs By Now

Because market rates were rising long before the BoC hikes, we arguably should already be seeing the lagging negative effects on employment growth at least in terms of decelerating gains by now. The opposite is happening as employment growth accelerated with nearly a quarter million jobs created in 2022Q4 and 104k of that in December. Accelerating employment growth requires us to think a little more carefully about what is going on which the rest of the points will attempt to do.

The ‘Noise’ Factor is Improbable

Some say meh, it’s the Labour Force Survey, get over it. It’s noisy. It’s unreliable. It has been wonky at times in the past with weird revisions sometimes due to errors. You wouldn’t want this approach to be your default in my view. Given that the Labour Force Survey’s monthly gains occur within a 95% confidence interval of about +/-57k you can’t just dismiss several months of strong gains as a statistical anomaly; it’s not impossible that it’s noise, but it is highly improbable. Therefore, when something like that Q4 pace of job growth happens you never want to over-react, but you should entertain possibly new ways of thinking in open-minded fashion.

So one possibility is that while public policy did many of the right things in supporting the economy, the job market and financial markets in 2020, perhaps Canada did too much of it with generous coverage of small business rent, employment costs and with hiring incentives. That might have prevented the labour market from adapting to changed drivers of the economy.

The cost to not allowing some degree of adjustment in the labour market has arguably been productivity. Canada has had basically the worst productivity performance—defined as output per hour worked—of any peer group economy since the pandemic struck. If new hires are producing less per new hour worked now than in 2019, then maybe you need to hire more to achieve the same incremental output now that you would have gotten from new hires in 2019. That’s a plausible shorter-run explanation of job growth but hardly the road to riches over the longer haul in terms of competitiveness.

Another possibility is that despite concern toward the outlook, improving supply chains are making it possible to produce more and with that goes a need for more inputs like workers. ‘Normal’ downturns in the past are not accompanied by an improving supply side of the economy.

To meet the needs of improving supply chains and more inputs, businesses today may have a preference toward hiring more workers (and hence adopting higher variable costs) than investing more in machinery and equipment (that would raise fixed costs) given the uncertain climate. It’s easier to adjust variable costs if the economy really nosedives and more painful to be stuck with fixed charges like financing and depreciation.

Another possibility is labour hording in a very different job market now than decades past. Domestic sources of growth in the supply of potential workers are weaker now than in the past when boomers and their kids were entering job markets. Today, absent such influences, letting go of workers might mean never getting them back in a structurally tight market.

Too Early to Tell with Immigration

I don’t find much evidence that immigration drove Q4 job growth or job growth over a longer period, but it might in future. Some of the surge last year was taking people already here and catching up to processing and the composition of employment gains did not line up with categories that often attract new arrivals like the professional/scientific/technical category of employment, or self-employment, or the trades among others. 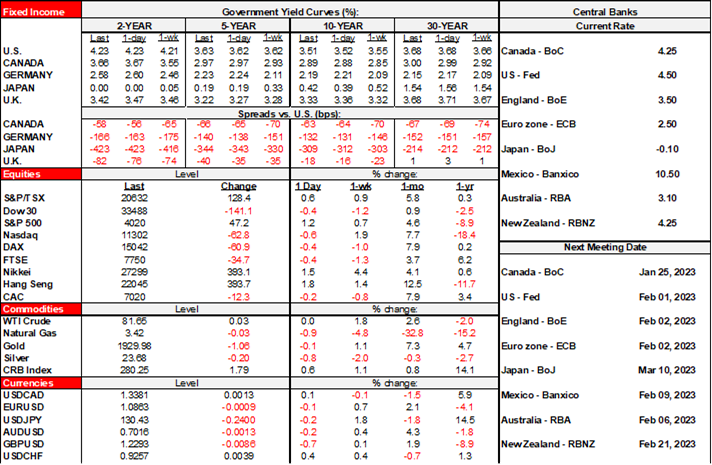