ON DECK FOR THURSDAY, NOVEMBER 24

Risk-on sentiment is carrying stocks and sovereign bond prices higher amid lighter market activity given the US holiday. There may be several catalysts beyond all the headlines on FOMC minutes. In fact, as argued below in a separate section, I’m skeptical toward the minutes-are-dovish angle and so with that here are some other considerations.

And so US and Canadian equity futures are up by about ¼% and European cash markets are up by ¼% to ¾% in Germany’s case. Tokyo and Seoul gained about 1% with the Hang Seng up by a little less as mainland China’s exchanges were little changed to slightly negative. Sovereign bond yields are under downward pressure in Europe and led by +/- 10bps declines in 10-year EGB yields. Canada’s curve is slightly richer in sympathy toward global moves. The USD is slightly weaker with gainers led by the won, yen, sterling and A$/NZ$.

There was more bad news out of China overnight with further lockdowns including Zhengzhou where the Foxconn “iPhone City” plant is located that is now locked down for mass testing starting tomorrow and over five days and then we’ll see when the results come in. There were more cases in Beijing and more preparations for a surge.

Sweden’s Riksbank hiked by 75bps to a policy rate of 2.5% which was priced, while forward guidance had little effect on the krona and Swedish short-term yields that if anything were both a little softer pre- and post-decision. Forward guidance slightly added to the prior projection with less than another 50bps of hikes expected next year to a peak projection of just under 3% (chart 1). Market pricing for the next meeting in February was unaffected with just over ¼% hike priced. 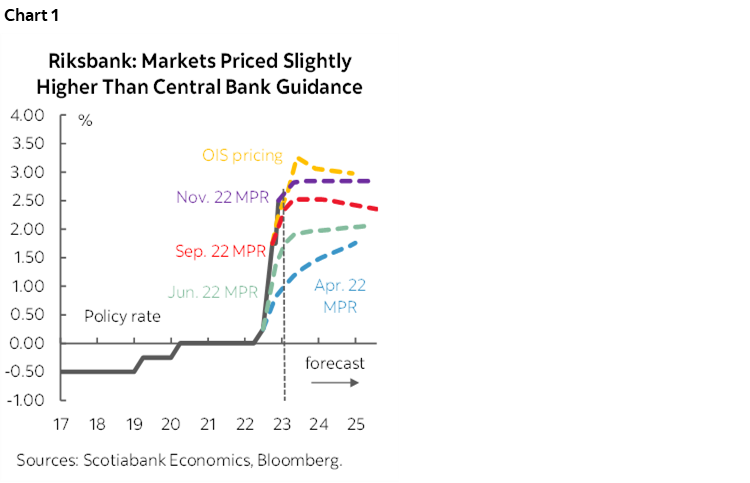 The Bank of Korea slowed the pace of rate hikes as expected by unanimously raising the 7-day repo rate by 25bps to 3.25% and guided that most of its members think only a little further tightening is likely. The front-end rallied and its higher beta currency rallied overnight, but probably more due to global forces than any surprises from the central bank. One of the earliest hiking central banks in the world began to raise rates in August of last year and has now raised by a cumulative 275bps. Governor Rhee Chang-yong guided that most Board members think the end is near, so to speak, with 1 thinking they’re done, 3 expecting only another +25bps hike, and two open to raising by more than 75bps. Pricing is shown in chart 2. 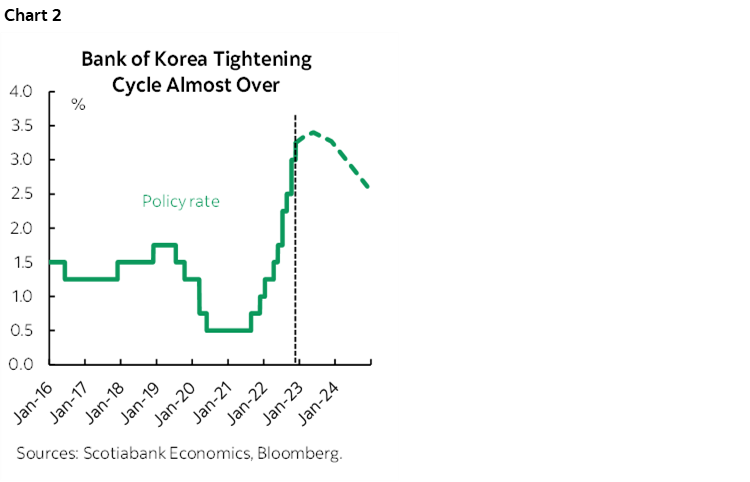 South Africa’s central bank hiked by 75bps to a 7% policy rate as expected. It was a 3–2 decision with a minority in favour of a smaller 50bps move.

With the serious central banks out of the way we can turn our attention toward the others. Turkey’s central bank cut on US Thanksgiving; you can’t make this stuff up. Anyway, it cut its one-week repo rate by 150bps to 9% as expected. That has been Erdogan’s stated goal since September when he said that the rate should come down to single digit territory by year-end and so the complicit central bank declared that cuts are now at an end. What Erdogan wants, Erdogan gets, or he fires anyone who objects. Turks pay the price through a collapsed lira and 85% y/y inflation.

German business confidence climbed in November with the IFO expectations gauge rise by 4.1 points to 80. Big whoop, it’s still toward the lowest since the start of the pandemic after plunging ever since the peak in mid-2021.

Mexican bi-weekly inflation was in the ballpark of expectations with a 0.6% m/m rise and core up 0.3% m/m.

Beyond that the focus is likely to be mainly upon off-calendar risks into lighter global liquidity on the US Thanksgiving holiday. Canada updated payroll figures this morning that showed a gain of 85,300 positions, but that report is little watched because it seriously lags with September data on tap today (LFS is due out for November next Friday) and they only measure payroll employees in a country that has a large number of folks employed at small businesses.

We’re also asked to believe that an added market catalyst is that the FOMC minutes were dovish relative to already known and priced considerations. I didn’t see any new information in the minutes, but maybe folks were positioned amid lighter volumes for something other than what the FOMC officials have been saying and what markets were pricing.

Here is a recap of what the minutes contained.

1. Terminal rate: They reinforced what Powell said on November 2nd followed by other FOMC officials by way of openness toward raising it but without pre-judging how high just yet. Stay tuned for the December dot plot that I think will raise the median to 5%. This wasn’t new information relative to market pricing for a 5% peak. Here is the direct passage of relevance from the minutes:

"Even so, various participants noted that, with inflation showing little sign thus far of abating, and with supply and demand imbalances in the economy persisting, their assessment of the ultimate level of the federal funds rate that would be necessary to achieve the Committee’s goals was somewhat higher than they had previously expected."

2. Pace: Powell said on November 2nd that they might downshift at either the December or January meeting. Since then, we've heard a number of officials lean toward December. The minutes reinforce this expectation with the reference to a "substantial majority" leaning toward downshifting and likely 50bps. Here is the direct quote with the key being the ‘soon’ set up given the way the Fed’s language evolves:

"In addition, a substantial majority of participants judged that a slowing in the pace of increase would likely soon be appropriate."

3. Pause: I thought they might reinforce FOMC officials' comments against pausing any time soon and against premature easing. That has characterized other communications but I don't see it in the minutes.

Data on the path to December may inform terminal rate forecasts but there is a high bar to affecting 50bps pricing. Key data will include:

1. PCE inflation for October next Thursday. I put in 0.4% m/m for PCE and 0.3% m/m for core PCE inflation which is similar to what we saw in CPI. I'm below consensus for spending though as I think some are overestimating the match between the retail sales control group and total consumption plus services consumption may not have repeated the same large prior gain as goods consumption picked up the pace.

2. Payrolls and wages for November next Friday. My guesstimates include +205k for payrolls with wages up 0.3% m/m SA. Most of the advance readings are unavailable so far.

3. CPI for November on December 13th and hence on day 1 of the next two-day FOMC meeting when they can theoretically adjust forecasts in the SEP and dots that evening that they would have first submitted the prior Friday. While it overestimated core CPI the last time around, the Cleveland Fed's 'nowcast' has a decent track record and it's pointing to 0.5% m/m for core CPI on the eve of the next decision. Headline CPI is tracking similarly to core given that gas prices were slightly lower on the month with a possible modest offset from food prices.