ON DECK FOR THURSDAY, MAY 19

Ack, you silly beans, you looked! I told you not to! Well, ok then, here it is. Stocks are getting hit again and if this holds then US equities will be officially in the –20% zone from the early year peak which meets many definitions of a material correction. US and Canadian equity futures are down by about 1% which is less of a decline than earlier this morning. European cash markets are down by 1% to 2%. Asian indices ranged from up to ½% gains in mainland China to declines in the 1% to 2 ½% ballpark elsewhere. Sovereign bond yields are lower by 7–9bps across Treasuries, 5–9bps across Canada’s curve and 2–11bps across gilts and EGBs. WTI oil is down another 2¾% which is also less than before China headlines. The USD is broadly softer against major crosses despite risk-off sentiment and in part as fed funds futures ease off hiking bets somewhat (chart 1) on the theory that more rapid tightening of financial conditions may do more of the Fed’s work if it sticks. 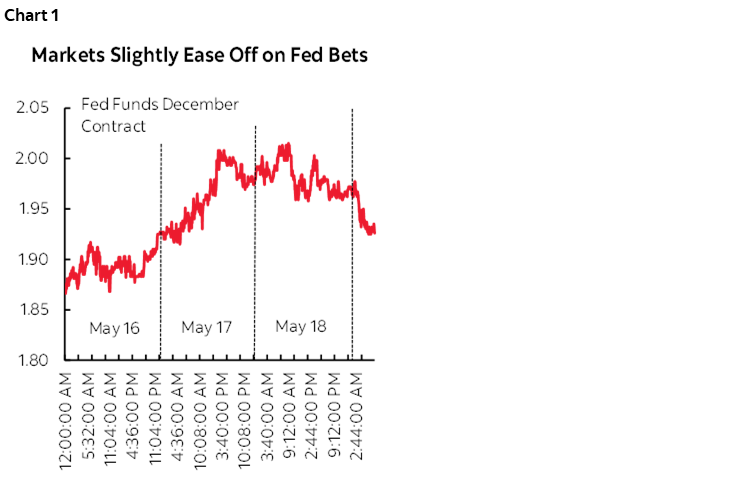 There is more evidence that China is going rogue on much of the rest of the world’s move to ban imports of Russian oil. Principles and values be darned, as cold hard economic opportunism is China’s guiding light. Anonymous folks are telling press outlets that China is seeking to buy more Russian oil no doubt at a discount in order to rebuild its depleted reserves. China’s oil stockpile is at its lowest since mid-April 2020 after which it soared as the pandemic swept the world (chart 2). There are several possibly important implications here and what may shake out of the mixture is uncertain. 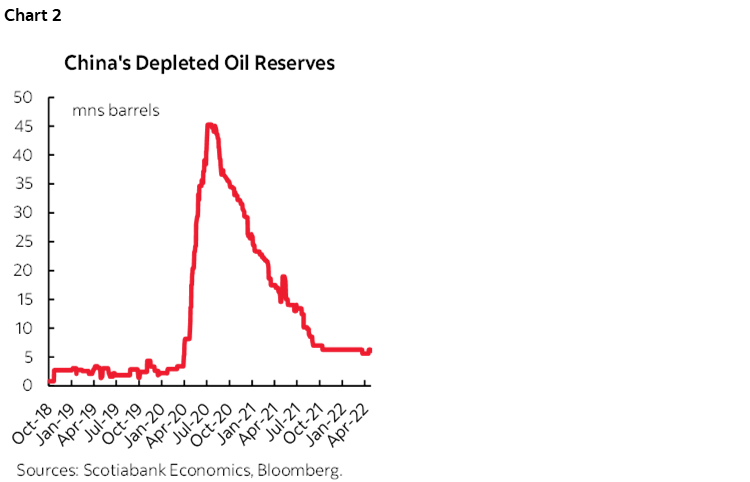 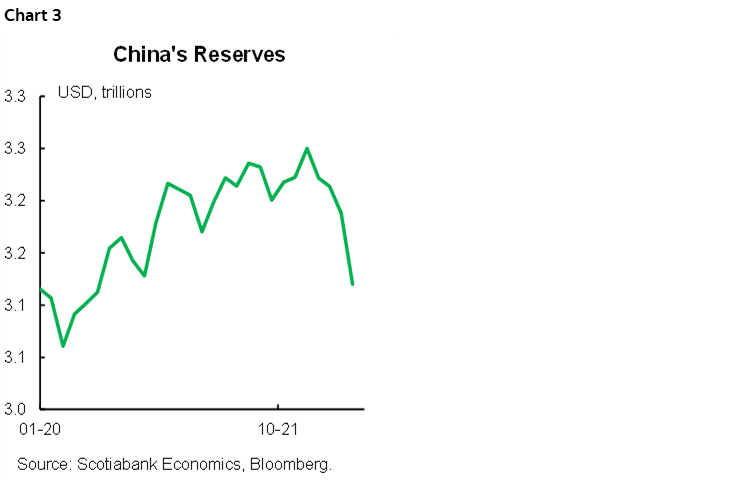 Data isn’t really mattering in all of this and we won’t get any earnings bombs today. Australia’s front-end had been rallying before jobs hit and the release was largely shaken off. Jobs were flat (+4k) as a big gain in full-time jobs (+92k) was offset by a big drop in part-time jobs (-88k). That pushed the participation rate down a tick to 66.3%. Slightly positive revisions to jobs were enough to dip the unemployment rate to 3.9% which then held steady in April.

Light US data is likely to be largely ignored today. The Philly Fed’s gauge for May (8:30amET) fell 15 points to 2.6 as new orders climbed, shipments rose to their highest reading since October 2020, but employment decelerated while prices paid and received eased off somewhat especially on the paid side. Weekly initial jobless claims back up a bit to 218k last week (197k prior revised down from 203k) while continuing jobless claims continue to decline (1.317 million from 1.342 million before). April’s existing home sales arrive later this morning and are expected to slip (10amET).

Deeply divided Canadian conservatives took down another one of their leaders last evening. Alberta Premier Kenney—one of the most recognizable faces in Canadian politics in a province that’s once again enjoying booming oil prices—lost a leadership review which will mean that the United Conservative Party (an oxymoron?) will launch a campaign for his replacement ahead of the election to be held next May 29th, 2023 unless the provincial Legislature is dissolved before then. The reason they took him down? Because even though there were ups and downs in Kenney’s approach to the pandemic, enough Conservatives were against the public health restrictions he implemented at times. A near tie between the UCP and left leaning NDP in the polls perhaps didn’t help much either. As a sidebar, this may be further evidence that should the pandemic take a nastier turn in future, say with vaccine evading and more harmful variants, then implementation of public health restrictions may be very unlikely regardless of the consequences. It also indicates that Conservatives are getting more and more deeply divided across the land by contrast to the Liberal-NDP pact that has a lock on the center-left vote. Alberta’s provincial bonds have many selling points and their spreads have performed similarly to other larger Canadian provinces of late (chart 4). 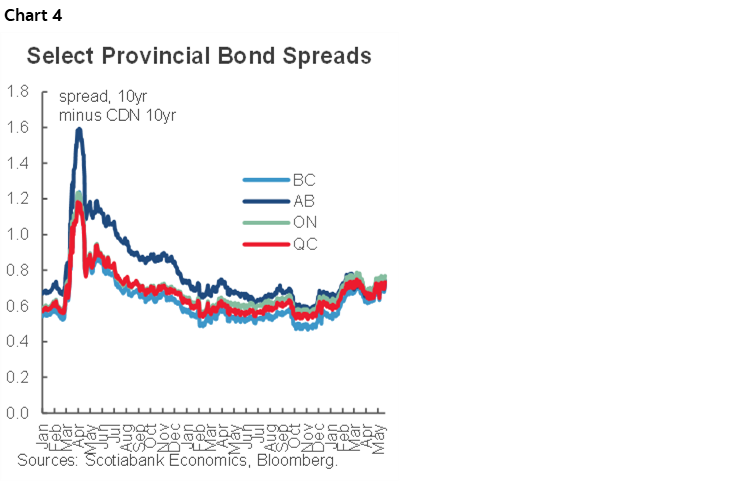 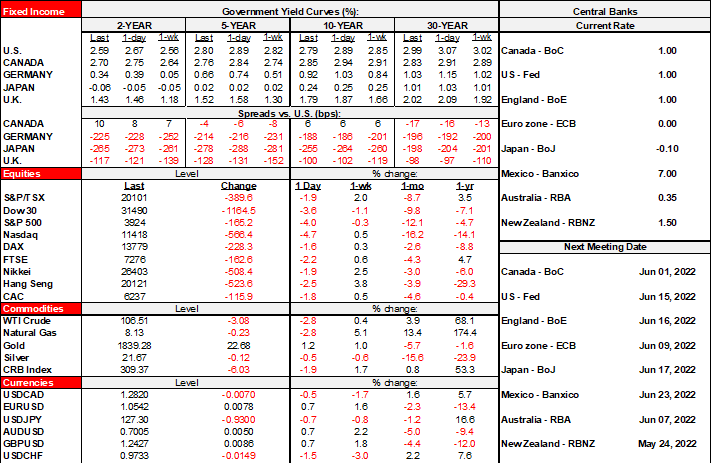