ON DECK FOR THURSDAY, JUNE 23

Mon Dieu! Safe havens are all the rage this morning, thanks to France (see below).

With yields coming off their peaks one would think there would be pause for reflection upon recession risk as automatic stabilizers strengthen. The US ten-year yield—a key driver of the 30-year mortgage rate after swapped out—is about 36bps off the recent peak and rallying about 4bps this morning. EGBs and gilts are outperforming with bigger moves into the double-digit declines in yields across maturities as they’re closer to the epicentre of what’s obsessing markets at least for today. Stocks are similarly divided with more positivity on this side of the pond than across all the naysayers in Europe; European cash markets are more positive now than they were when the data first began to hit and range from flat in London to down ½% in Frankfurt with mild gains elsewhere, while N.A. equity futures are up by between ½% and ¾%. The yen and USD—in that order—are the preferred crosses but CAD is outperforming most other crosses partly buoyed by yesterday’s inflation blow-out and BoC expectations but also joined by MXN ahead of Banxico’s decision.

When France’s PMIs hit the ‘wires’ at 3:15amET they immediately triggered risk aversion as they tipped off greater downside than expected to the broader Eurozone PMIs that arrived about 45 minutes later. That effect waned as time passed. The Eurozone PMIs signalled slowing but still positive growth in the composite, services and manufacturing gauges. The fact that the UK’s and Japan’s PMIs surprised higher while Australia’s roughly held unchanged didn’t matter. See chart 1 for the composite gauges. It was the eurozone all the way. The charts on the next page show the PMI connections to GDP in each case. They are loose guides. Loose, as in underlined, italicized, and if you’re really feeling frisky then perhaps even bolded. See for yourselves! There is nothing about these gauges that will tell you about recession risk over the next, say, year or two. They tell you more about what’s going on in the current quarter and arrive earlier than other made up data. 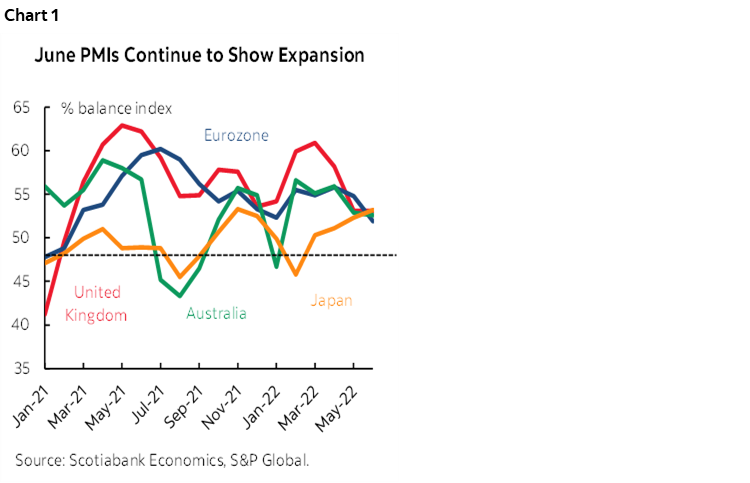 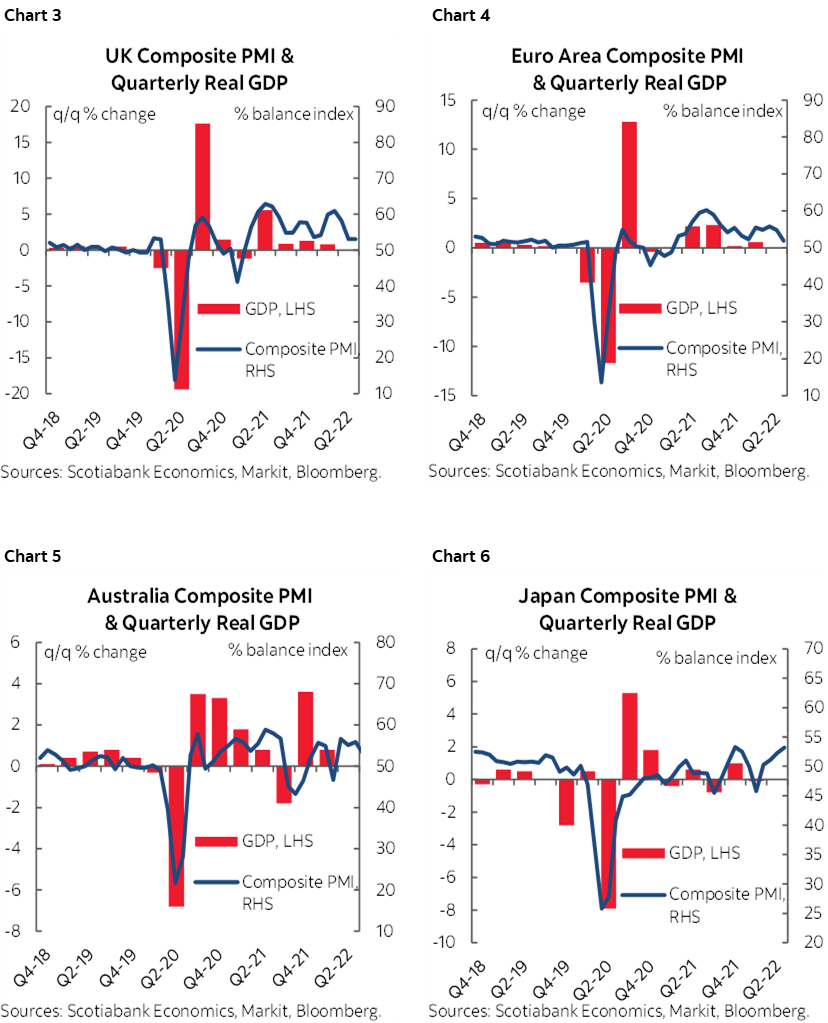 Four central bank decisions were delivered overnight into this morning ahead of Banxico which is the only one that really matters to most of our clients. 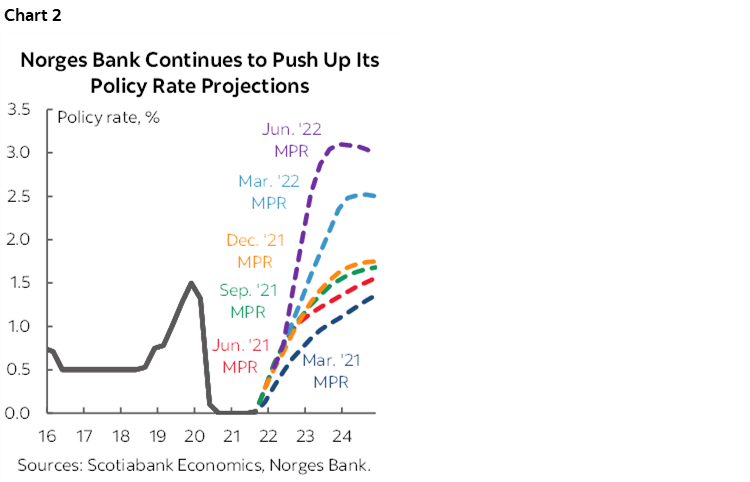 On tap into the N.A. session will only be a few developments.

Banxico is unanimously expected to hike 75bps this afternoon (2pmET). Officials have fairly strongly guided as much including DepGov Heath who said “For us, raising 75 is a lot, I don’t think raising 100 is possible, it would be better 75, two or three consecutive times.” With that, we may also hear forward guidance that leaves open such a path. Bi-weekly CPI surprised higher this morning with headline inflation rising to 7.9% y/y (7.7% consensus and prior) primarily driven by stronger core CPI at 7.5% y/y (7.3% consensus and prior).

Round 2 of Powell’s testimony kicks off at 10amET with the same statement, same grilling and similarly dour faces all looking to say inflation is the other guy’s/gal’s fault. Nothing changes from when you were kids, it’s still the same hot potato schoolyard antics. Every central bank statement these days can be neatly summarized in much shorter fashion with just the following words: Not me, I dunno, she did it, don’t ask me, and I’m telling you booboohead! Ah just go to your rooms for time-outs. No screen time today. And double veggies! But seriously, the cost to central banks’ ineptitude on the inflation front is rising recession risk and if you think a loss of faith in central banks has peaked then perhaps just wait.

The US also updates the S&P PMI measures (9:45amET) that are less watched than the ISM gauges the Fed prefers because the latter focus upon domestic economy considerations. Modest downside risk is expected to most of them. Weekly initial jobless claims were unchanged at 229k for anyone still reading.

A pair of preliminary estimates based upon incomplete samples indicate mixed results for Canada. Manufacturing sales fell 2.5% m/m in nominal terms during May mainly due to autos and primary metals but sales in the wholesale trade sector advanced 2% mainly due to food & beverage plus machinery and equipment with the latter boding well for business investment given that Canada imports most of its capital goods. These preliminary estimates are not adjusted for inflation.