ON DECK FOR FRIDAY, JUNE 17

Global markets are spending Friday licking their wounds after all of the central bank developments this week that had them fully awakening from their prior sleepwalking through soaring inflation. Consolidating positions ahead of the US ‘Juneteenth’ long weekend that will see stocks and bonds shut on Monday is probably an added factor amid light calendar-based risk and few notable developments.

EGBs are rallying particularly through tightening Italian and broader peripheral spreads over bunds in what I think is reaction to Lagarde’s comments that hit after yesterday’s European close on how a new anti-crisis tool would target limits to how high bond yield spreads could go across the periphery. The ECB seeks to limit ‘irrational’ moves in spreads, whatever that would be. Chart 1 shows those spreads are back to around levels witnessed when the pandemic first struck. We’re left to interpret remarks from individual ECB members on this ‘irrational’ limit to spreads with Italy having a natural funding incentive to argue it should be lower. Get your bumper sticker now, ‘Free money for Italy!’ If markets are merely engaged in price discovery and rationing credit in differential fashion as monetary policy tightens then is that ‘irrational’? Seems to me we’ll never escape the period in which central banks think they should be imposing their judgement on markets and interfering with their fundamental functioning by picking winners and losers. Some of their actions have caused more problems than solutions. 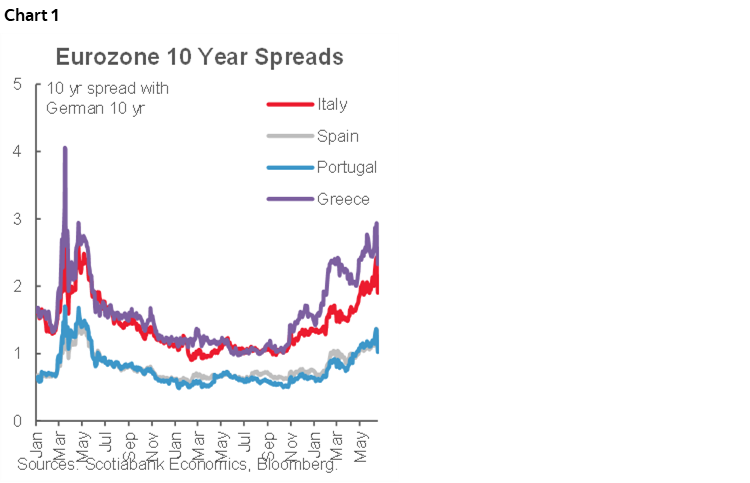 The US front-end is a touch cheaper with the 2-year yield up 3bps and less movement across longer term yields. The USD is slightly firmer and mostly against the yen’s reversal (see below). Stocks are broadly higher with US and Canadian futures up about 1% and with similar moves across European cash markets. The Nikkei followed yesterday’s declines across western markets and largely looked through the BoJ communications.

The Bank of Japan did…wait for it….absolutely nothing! As pretty much universally expected. Loose speculation going into last night’s Bank of Japan decisions had put a bid to the yen that subsequently fully reversed after the communications hit, leaving the yen little changed on net over the past couple of days. The yen is moving in on 135 to the USD. Governor Kuroda rejected a need to conduct another policy review and said that the sustainability of its 25bps yield curve control stance toward 10 year JGBs is not at risk while adding it would not be appropriate to tighten monetary policy that could cause an economic contraction. The statement noted that in the context of many uncertainties facing the Japanese economy, “it is necessary to pay due attention to developments in financial and foreign exchange markets and their impact on Japan’s economic activity and prices.” Some only picked out the foreign exchange part of that sentence. The BoJ to date has looked through yen weakness due to transitory effects on inflation that are incompatible with its medium-term inflation goals.

BoE Chief Economist Pill gave an interview saying that it’s up to markets to interpret what is meant by the insertion of “will if necessary act forcefully in response” to any indications of more persistent inflationary pressures. He added that ‘the trigger for this more aggressive action’ would be wage inflation and evidence that signs that inflation is becoming embedded in pricing behaviour of firms.

Fed Chair Powell will give welcoming remarks (8:45amET) at a conference in Washington on ‘the international roles of the U.S. dollar.’ There is probably low risk around this in the wake of Wednesday’s communications and given the Fed-Treasury arrangement on the dollar. We might also see a published commentary from KC President George on why she dissented on Wednesday.

The US will update industrial output for May this morning and it is expected to post a soft gain (9:15amET). And on this, I can only say: please don’t!! Yesterday’s speech on inflation by Canada’s finance minister might have been a tad pointless and a purely political effort, but another round of US stimulus cheques would only fan more inflation. Then again, economic logic hasn’t carried the day with the Biden administration as we can see on the Keystone snub to Canada while instead preferring to court MBS and Maduro. Further, if not for Manchin, Biden would have been rolling out more fiscal stimulus this year.

Canada’s calendar is dead quiet today. The focus going forward will be upon next Wednesday’s CPI release. I submitted estimates to newswires last Tuesday (1.2% m/m NSA and 7.8% y/y from 6.8% prior) but as yet there are no consensus estimates available. 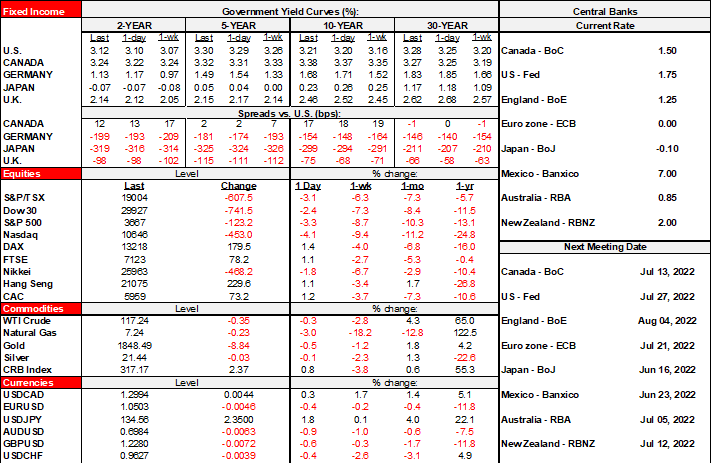