Get the latest analysis as Scotiabank Economics takes a deep dive into everything NAFTA. Find out our experts’ views on the historical impact of the agreement, how potential changes will affect the Canadian, U.S. and Mexican economies and why NAFTA makes North America Great(er). 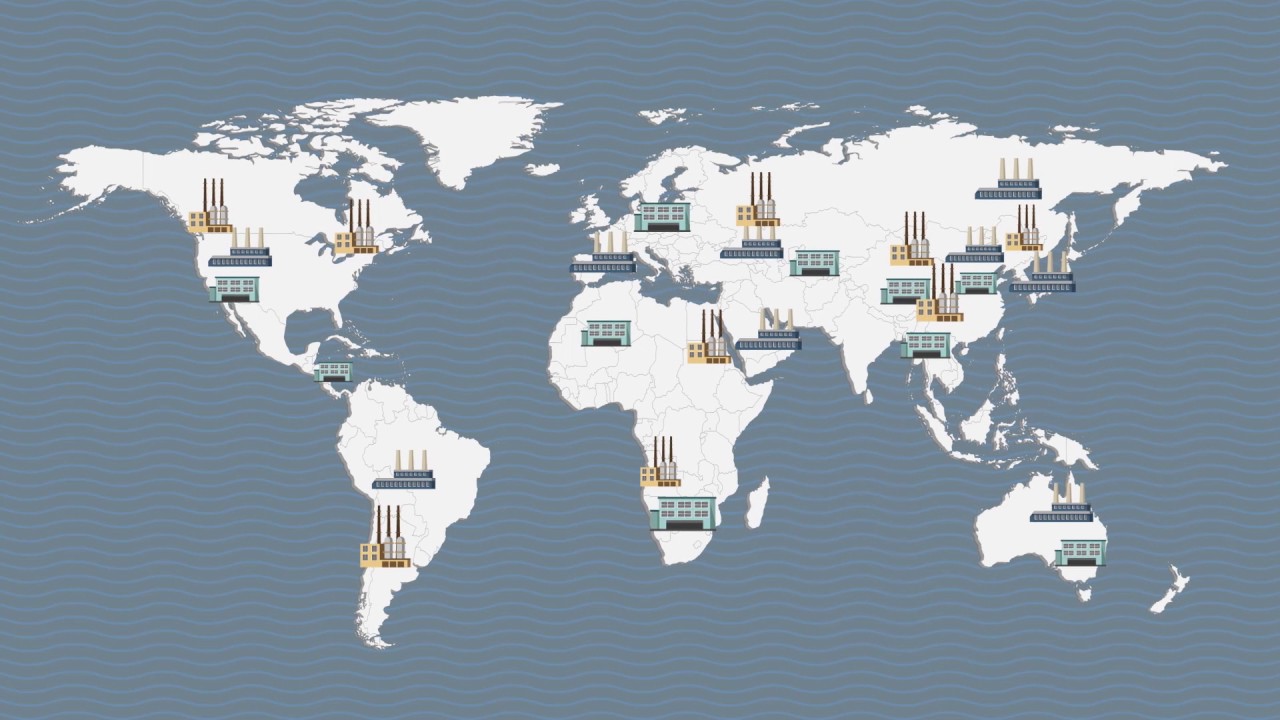 Tweaking NAFTA for the better 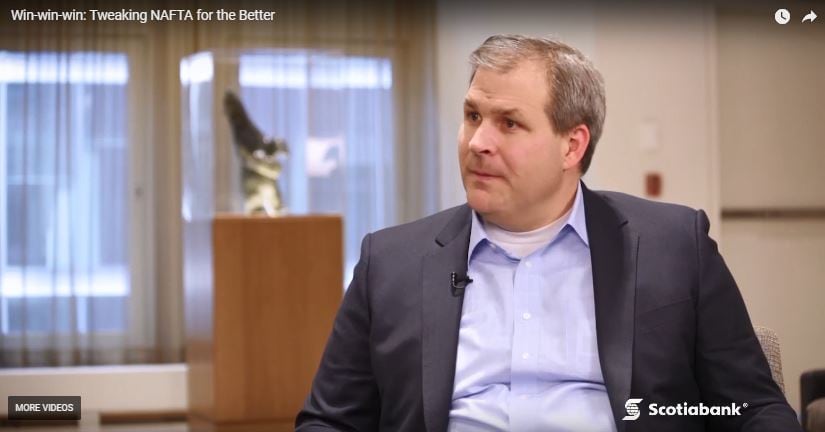 Substantial revisions to Mexico-U.S. trade policy and ‘tweaks’ in its agreement with Canada have been widely hinted at by the Trump Administration. In the face of uncertainty, Scotiabank Economics takes a look at what these tweaks could mean for the NAFTA member countries.

How vulnerable is Canada?

About 20% of Canada’s national income comes from supplying goods and services to the U.S. market, while the U.S. receives about 76% of Canada’s total annual exports. 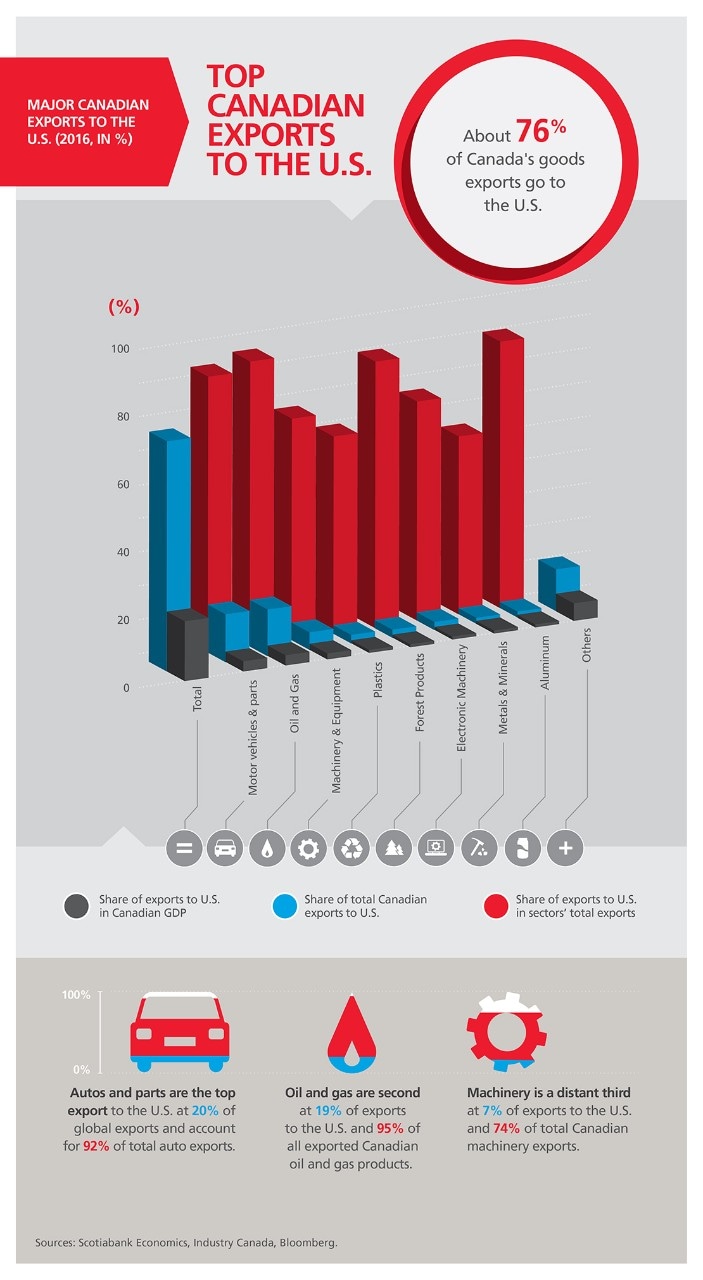 Ontario’s manufacturing sector is particularly exposed to changes in U.S. trade policy. Ontario’s auto sector exports account for about 25% of the province’s annual revenue. Disrupting integrated supply chains with the U.S. would be detrimental to Ontario’s economy. 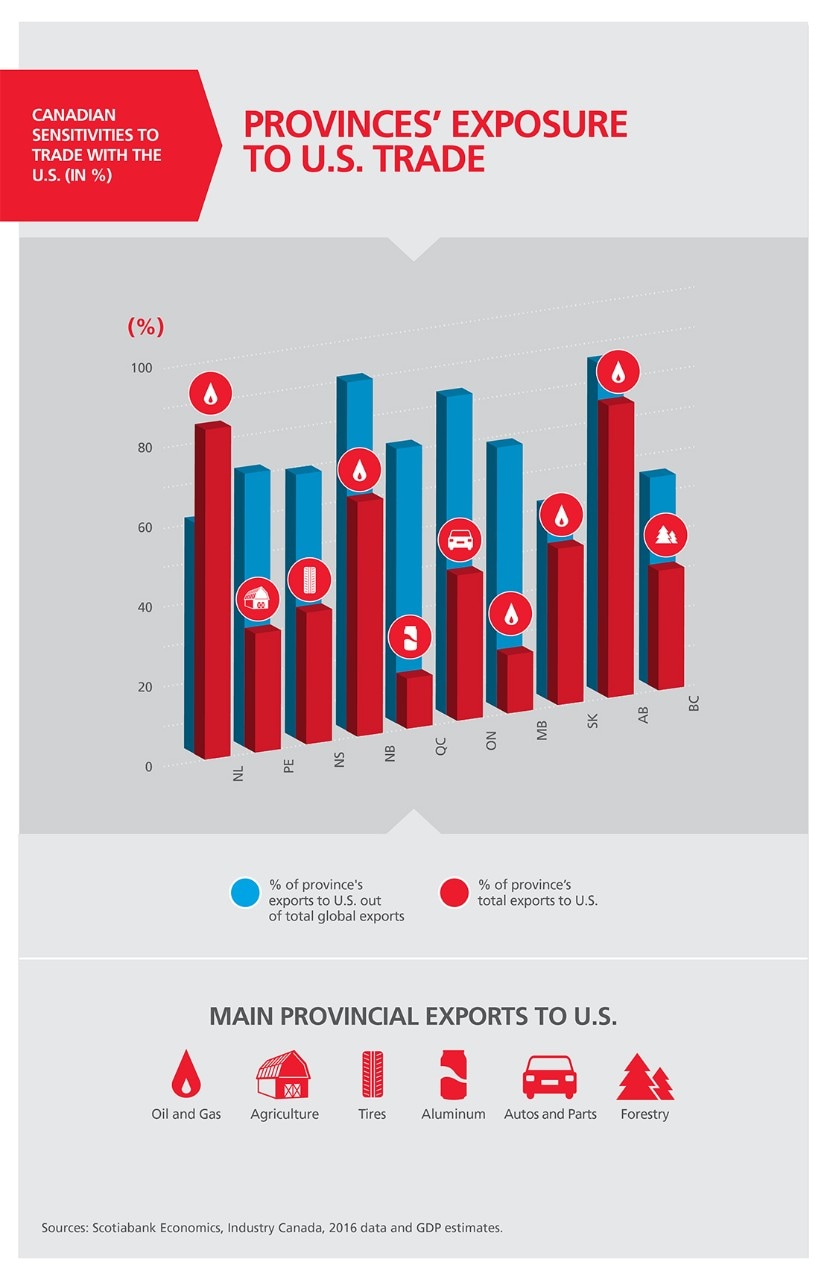 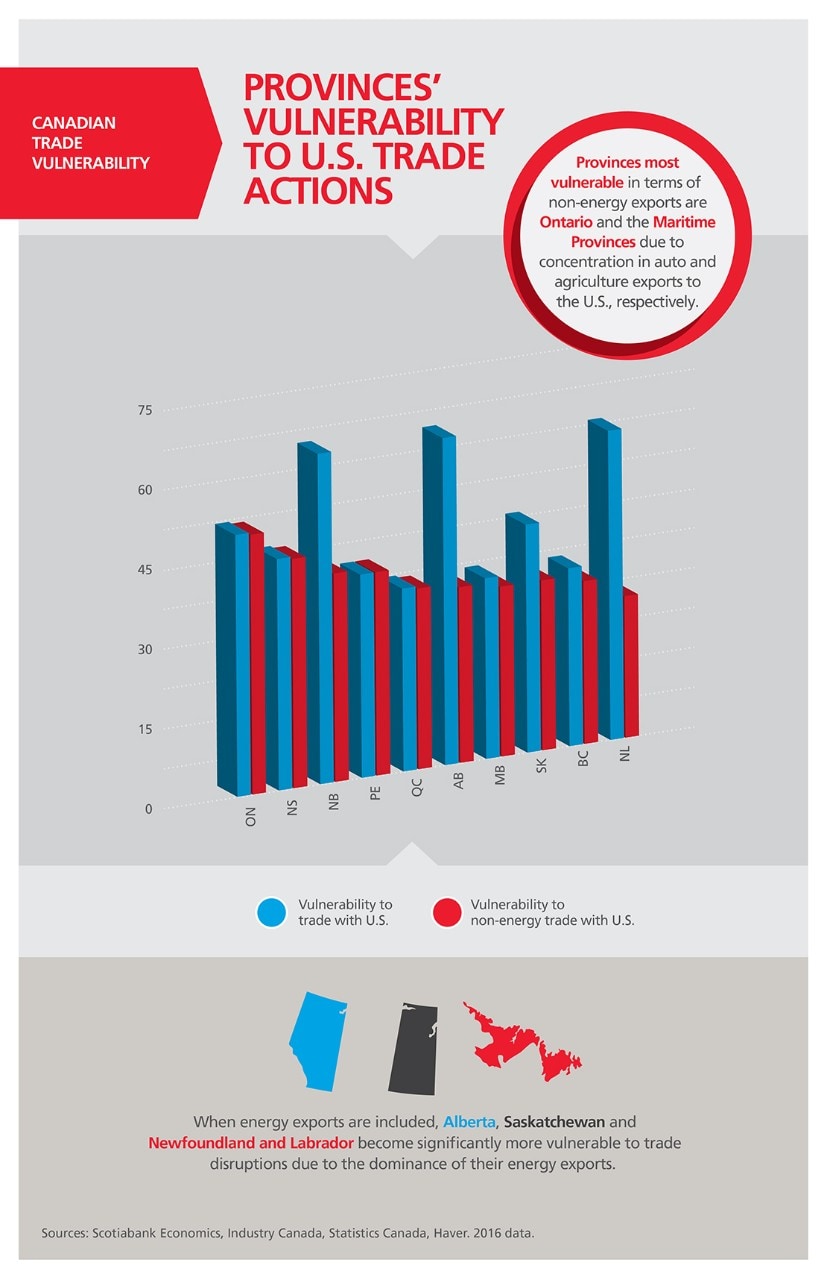 U.S. investment in Canadian exports is vulnerable too. U.S. foreign investors with substantial holdings in Canada’s major export sectors could provide a constituency in the States that may lobby to prevent disruption to Canada-U.S. trade, as disruptions could significantly impact their businesses. 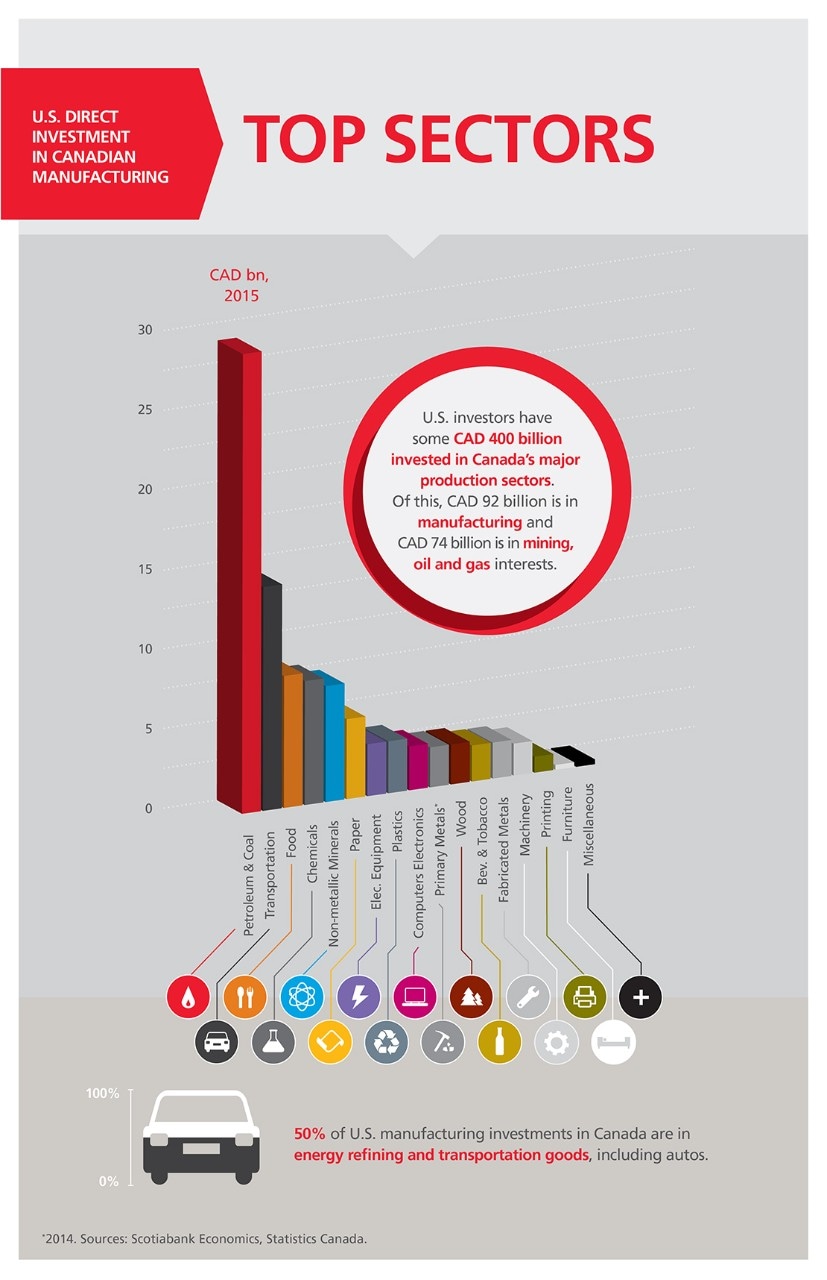 How vulnerable is Mexico?

Mexican-U.S. trade would also experience a similar impact to Canada’s, as the United States’ third largest supplier of goods. 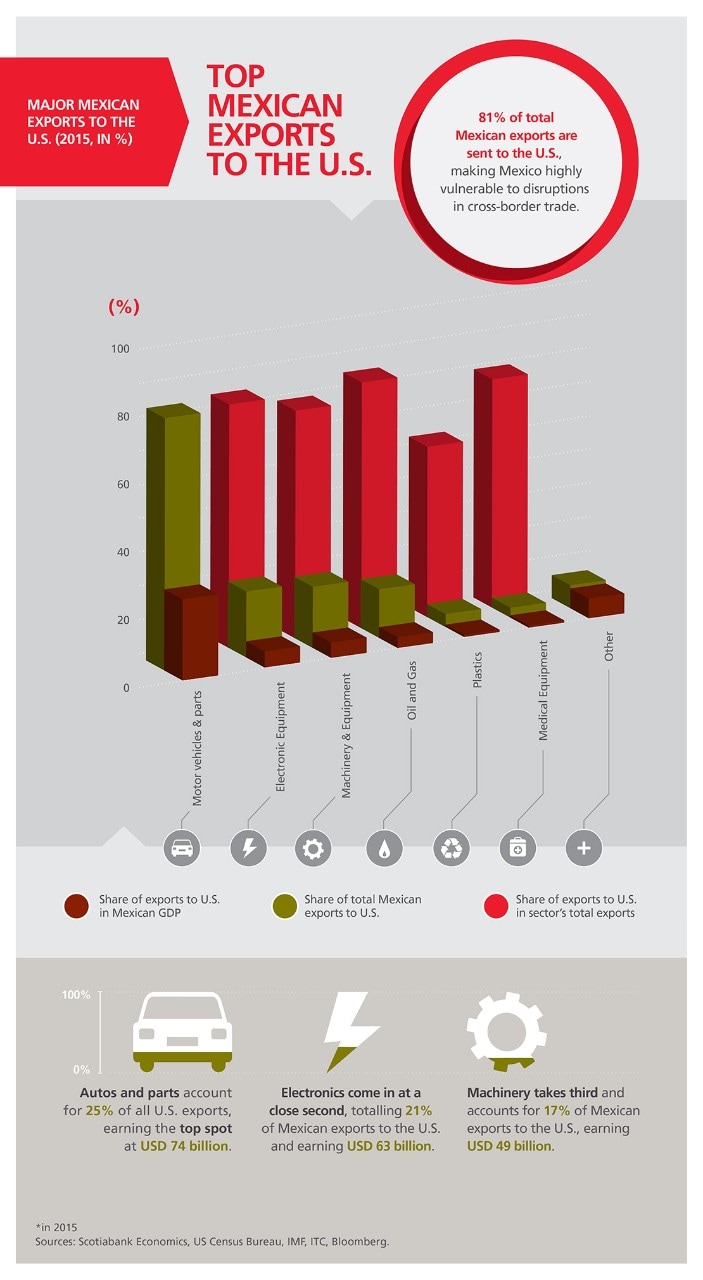 Is the U.S. really less dependent on NAFTA?

The U.S. economy is less directly dependent on international trade than either the Canadian or Mexican economies. However, several U.S. Border States’ economics are strongly tied to NAFTA trade, where there is greater economic integration.

U.S. states are generally less vulnerable to changes in U.S. trade policy than Canadian provinces and Mexican states, but there would be significant impact on border states if NAFTA were torn up.

Whether we see an overhaul or tweaks, NAFTA is very likely going to look different once renegotiations are complete. Rules of origin and dispute settlement mechanisms have been raised as areas for potential revision, but what does that really mean? 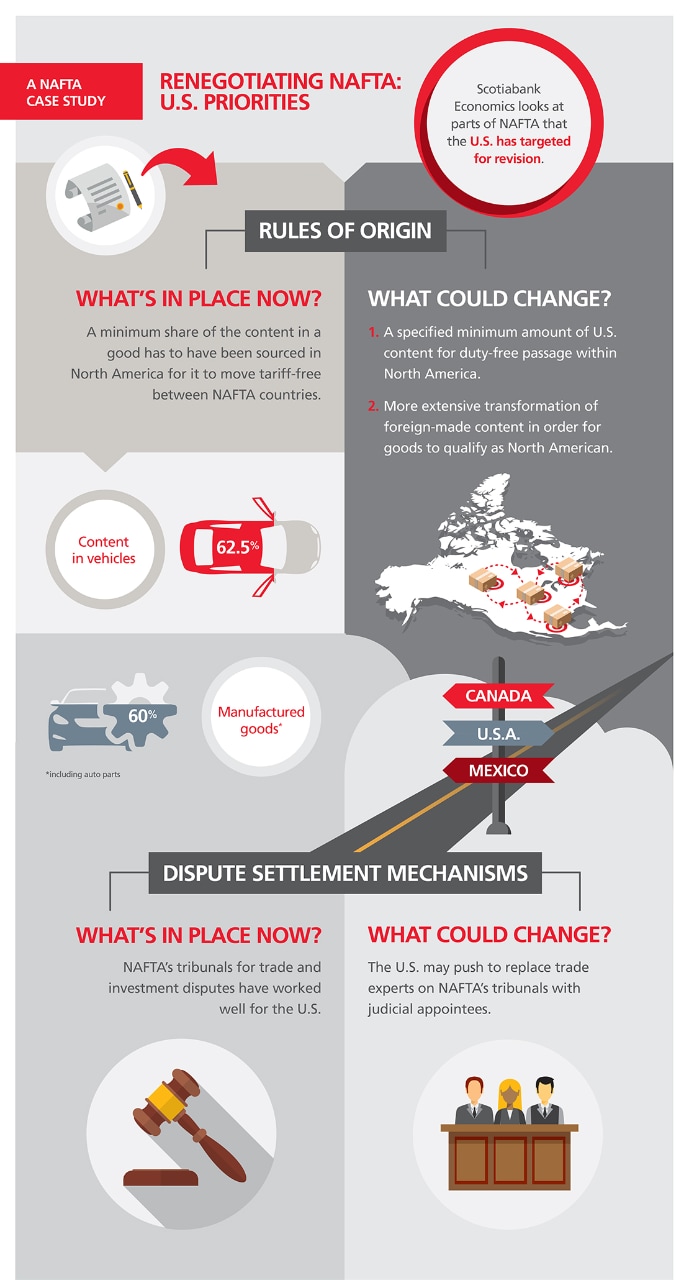 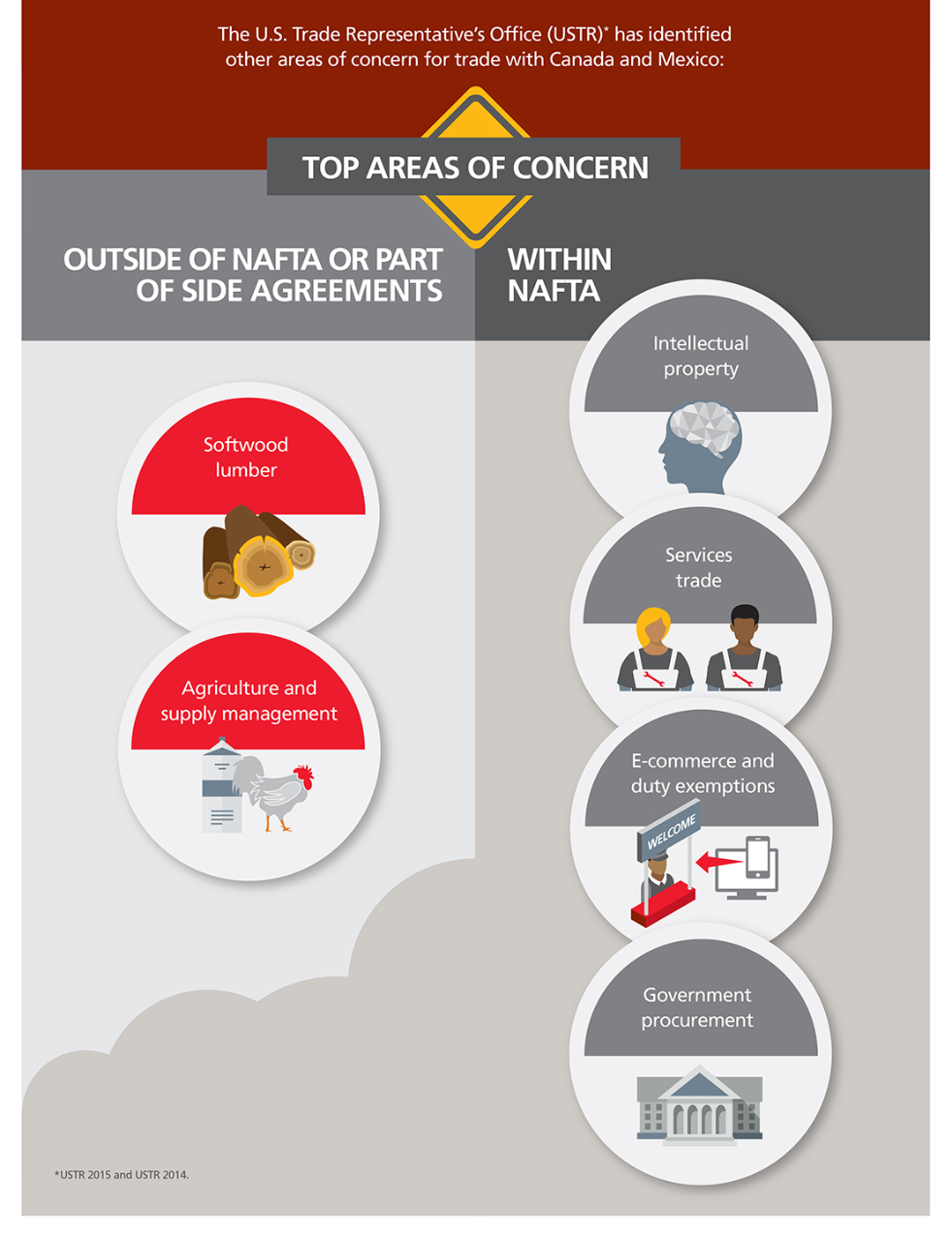 NAFTA was implemented on January 1, 1994, in which the U.S., Canada and Mexico agreed to eliminate existing bilateral tariffs between the nations in favour of a trilateral agreement. The elimination of these tariffs on goods from various sectors gradually took place over the following 15 years, but its provisions go far beyond that. 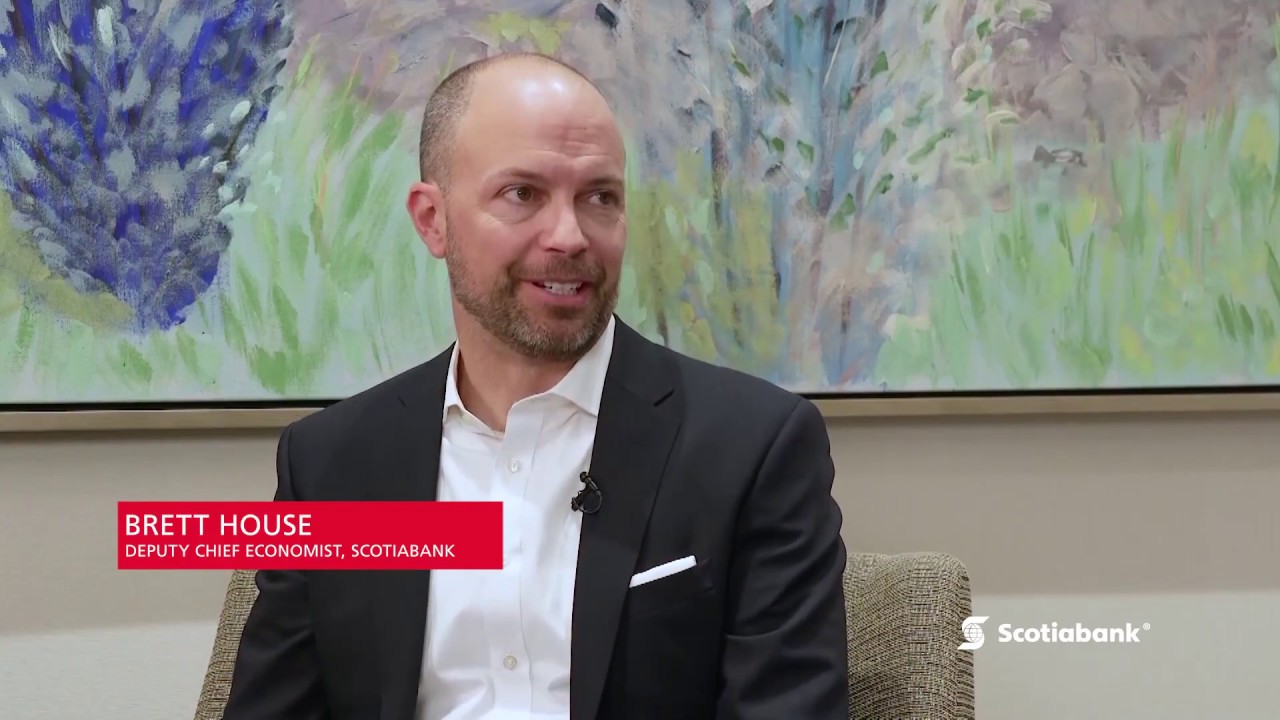 What has NAFTA meant for North American trade?

North American trade has boomed under NAFTA. Trade amongst the NAFTA-3 has more than tripled since its inception as total trilateral trade came in at just over USD $1.0 trillion in 2015. But it’s not just trade; cross-border investment within North America has exploded under NAFTA too. NAFTA has helped North America punch above its weight in economic terms. The NAFTA zone accounts for nearly 28% of global nominal GDP in a region that holds about 6.5% of the global population. 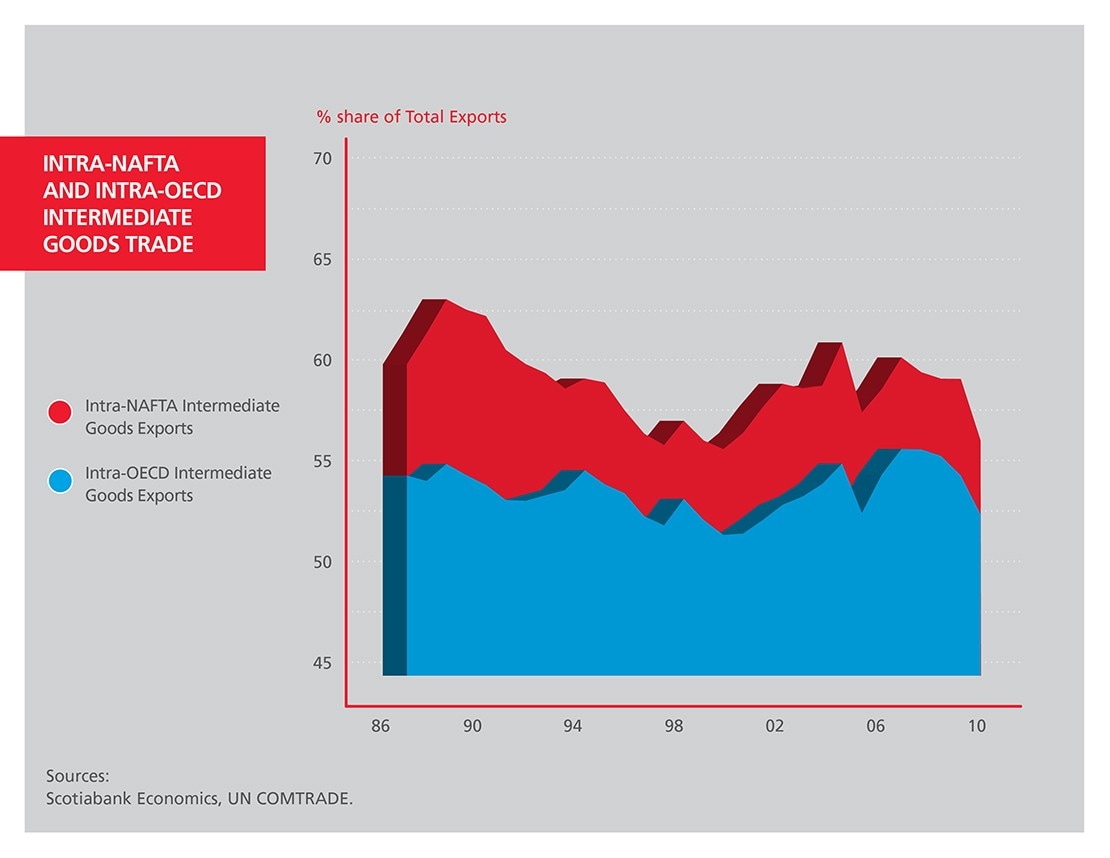 What has NAFTA meant for manufacturing jobs?

Despite recent speculation to the contrary, the numbers don’t lie. Millions of North American jobs depend on NAFTA. There are studies that estimate around 6 million U.S. jobs, or about 1 in every 24 U.S. workers, depend directly and indirectly on trade with Mexico alone, while others estimate that up to 8.3 million or 5% of all American jobs depend in some way on trade with Canada. 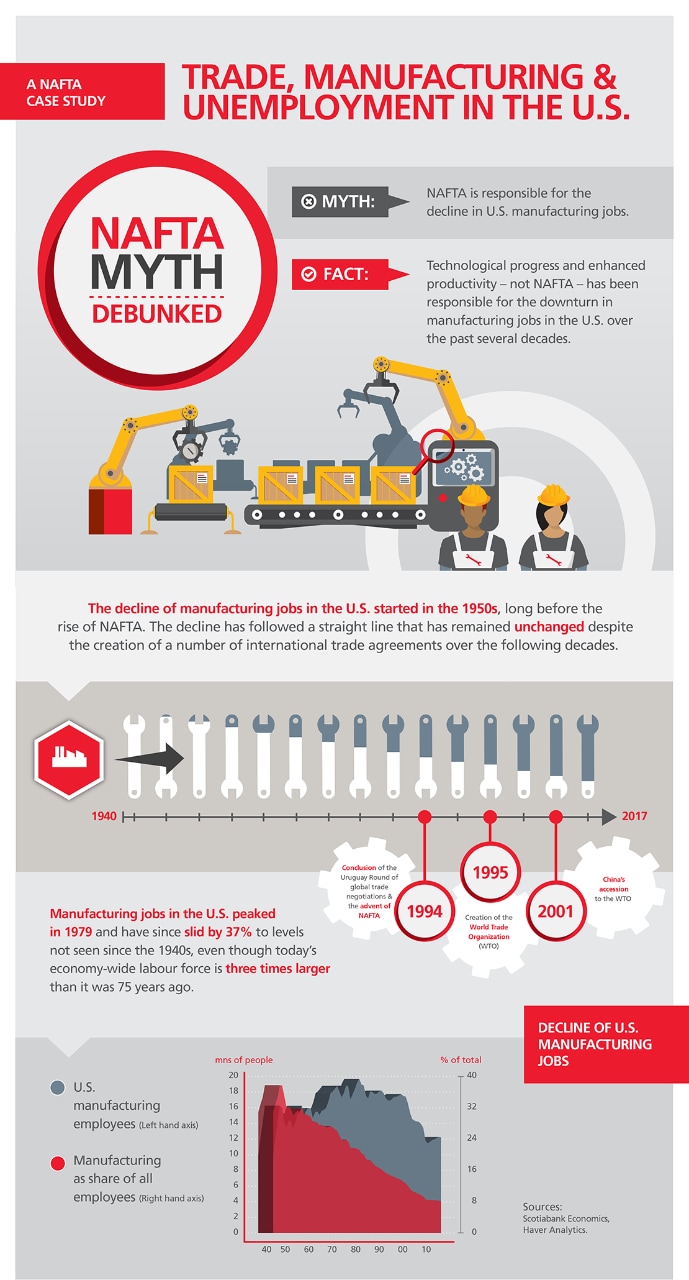 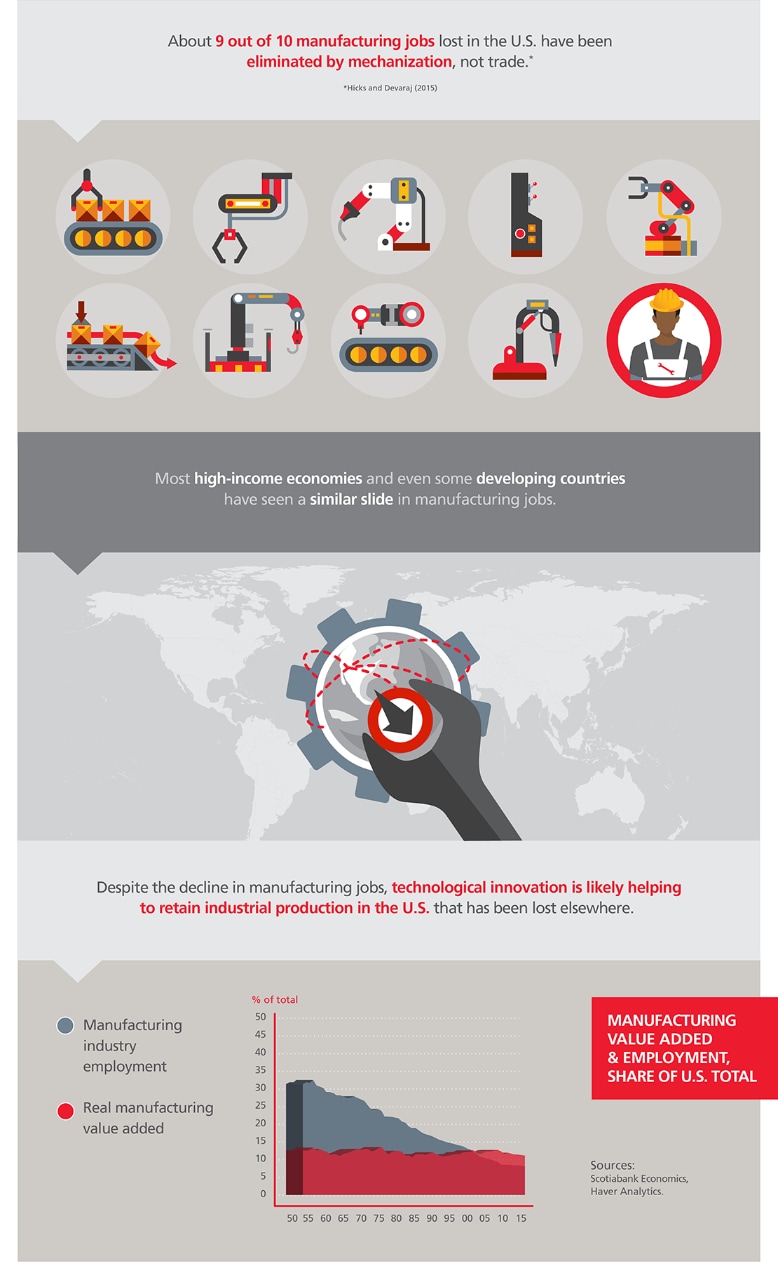 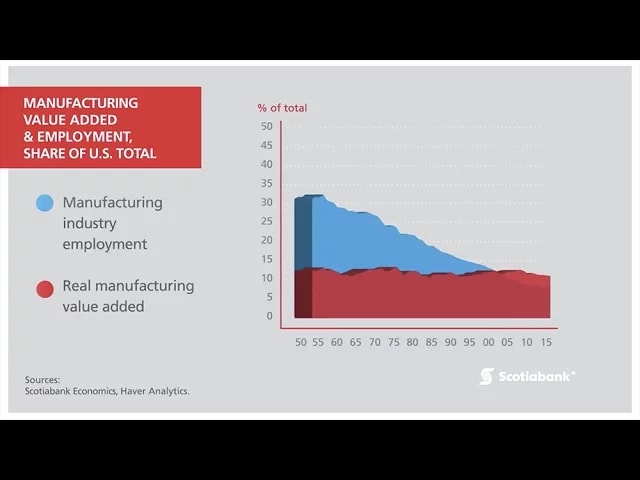 How has NAFTA impacted state and provincial economies?

Trade in nearly every U.S. state and Canadian provincial economy is significantly impacted by NAFTA. Canada and Mexico are the top export destinations for 39 U.S. states and on the import side, the two countries together are the most important sources of in-bound foreign foods for 19 U.S. states. 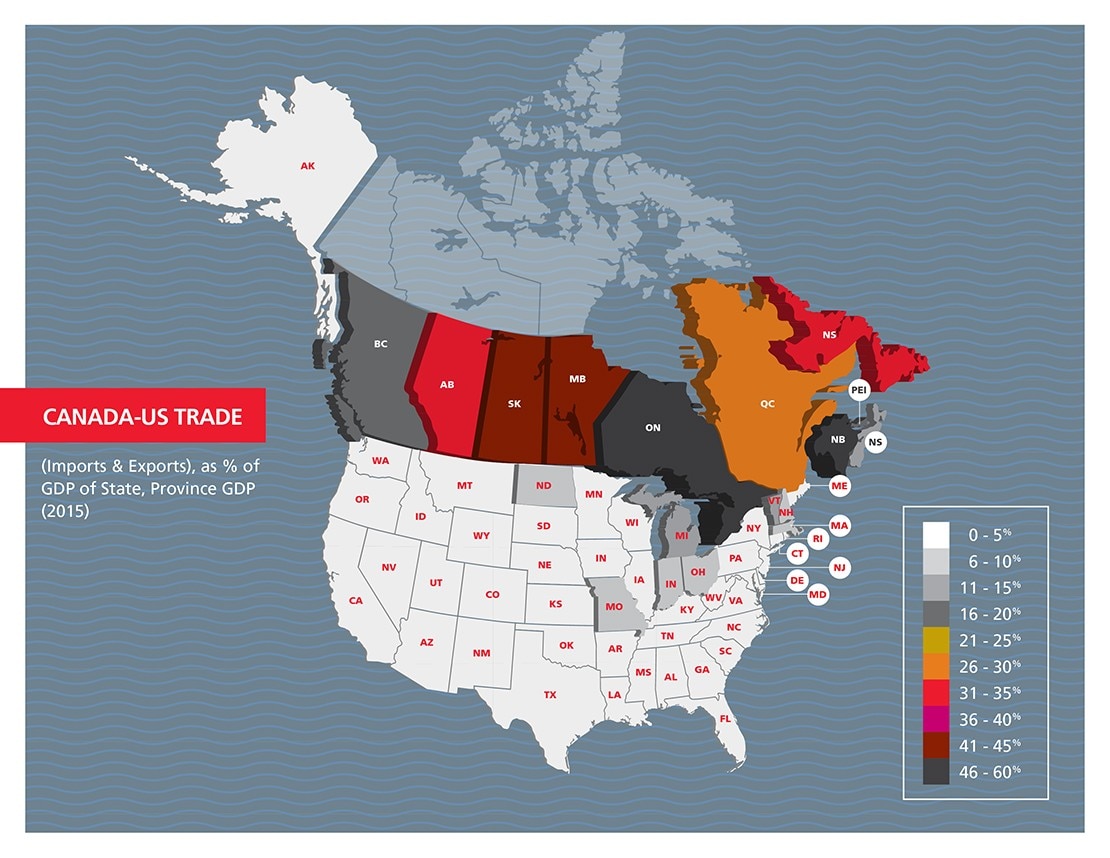 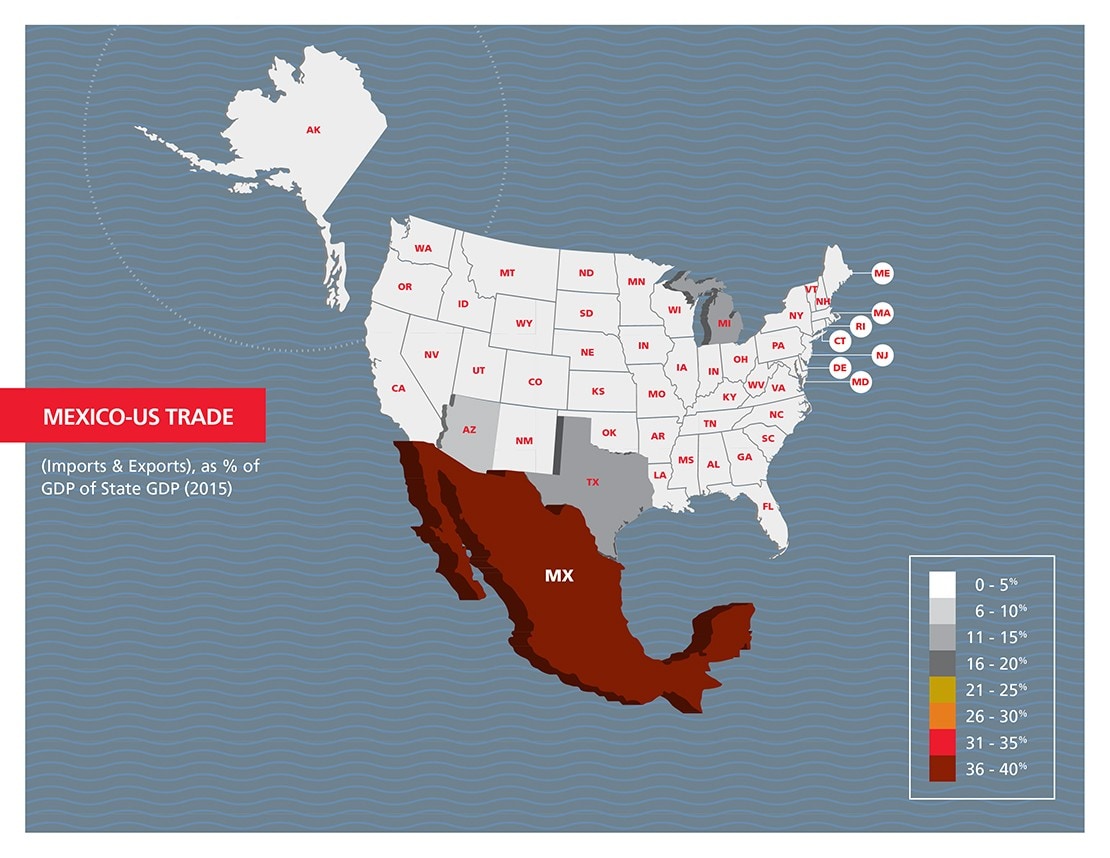 What does Mexico bring to the table?

Mexico keeps North American manufacturing competitive. Intermediate goods pass back and forth across the borders of the NAFTA-3 several times during manufacturing. This means that about 40% of the content of products imported from Mexico to the U.S. was actually “Made in the U.S.A.” This applies to Canadian imports too, which contain roughly 25% U.S. content. Taken together, Canada and Mexico account for 75% of all the U.S. domestic content that returns to the U.S. as imports from around the world. 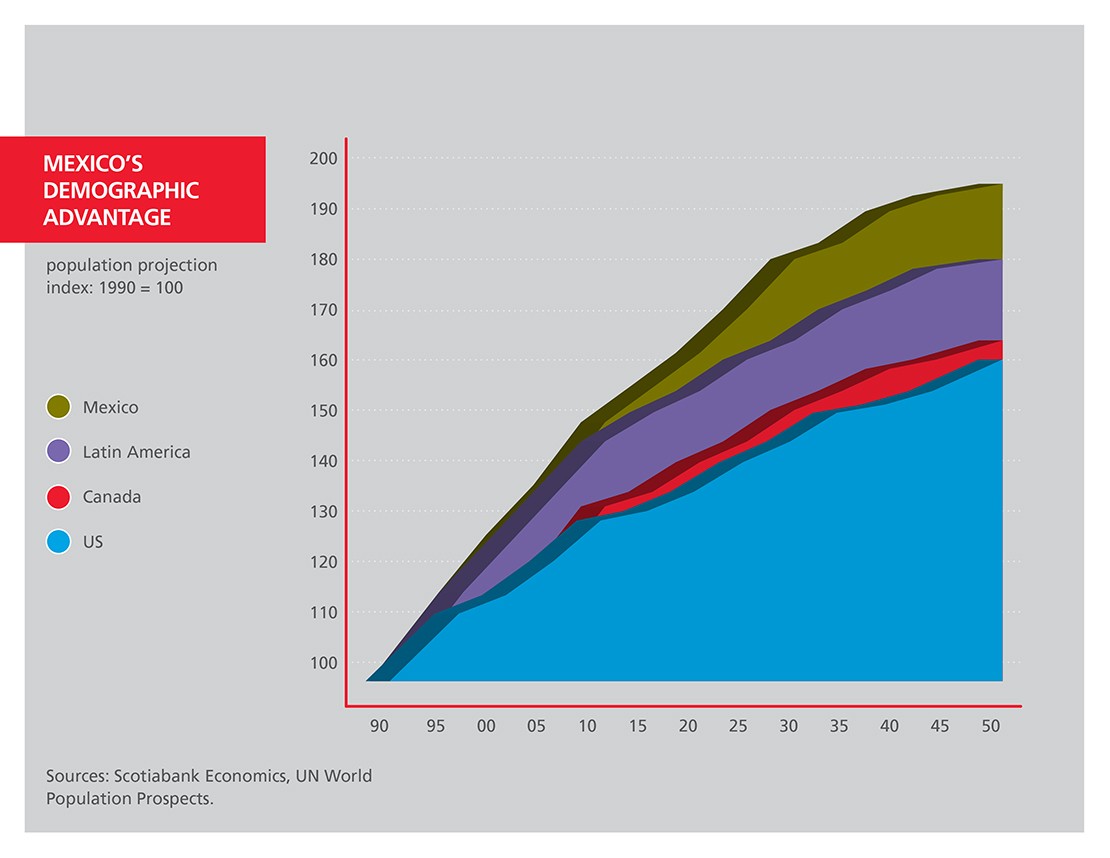 How should NAFTA be renewed?

NAFTA can be renewed with a win-win-win deal. Updating NAFTA to cover technological and business advances that didn’t exist in 1994 is a win-win-win proposition. Re-opening NAFTA has the potential to improve the agreement for all three of its member countries, both now and in the future.