Negotiations for a renewed North American Free Trade Agreement conclude their third session this week in Ottawa amid cautious optimism that a deal can be struck by year’s end. But there are few signs of progress on the toughest issue: American concerns about a growing trade deficit with Mexico.

According to President Trump, NAFTA has driven growth in Mexican manufacturing at the expense of American factories and workers. This perception of a Mexican advantage has prompted discussion of new rules that could drive up labour costs in Mexico, or require a greater amount of U.S. content in goods shipped across borders duty-free.

There is a strong argument against such measures. And it’s the actual performance of the automobile industry in all three countries. 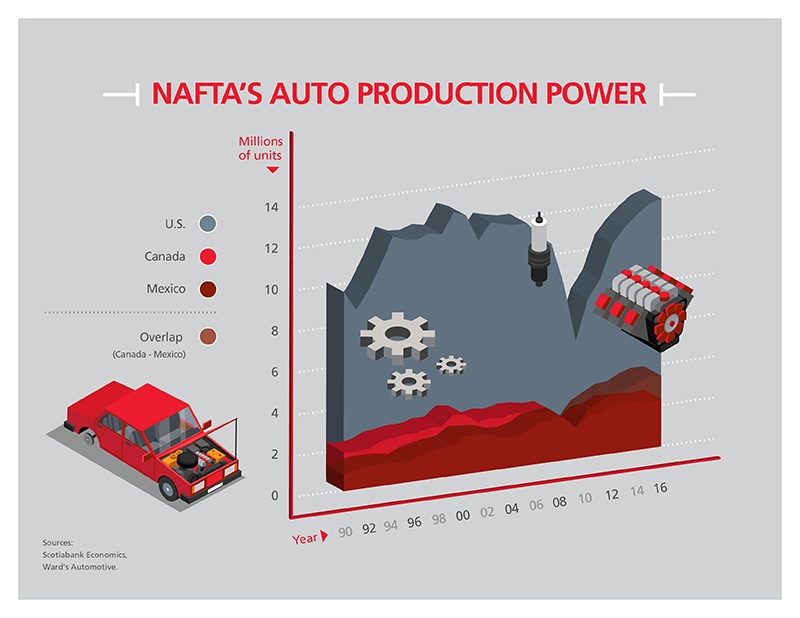 
Auto manufacturing has been shaped by NAFTA in recent decades to a degree and scale unlike any other industry. The manufacture of vehicles and parts is remarkably integrated across all three NAFTA nations, with firms moving parts and finished vehicles back and forth across borders, duty-free, in search of the right balance of production cost, specialty and sophistication.

The results, measured by global competitiveness and employment, have been extremely positive. Consider how the sector bounced back, in all three countries, from the punishing contraction of 2008-2009:

Tearing up NAFTA, or renewing it with new barriers to free trade, could apply the brakes to that growth.

This could create new risks for the nearly 2 million jobs at assembly and parts plants in the United States, Canada, and Mexico.

It would likely impair the competitiveness of NAFTA-area exports to the rest of the world.

And it could push up domestic prices, forcing consumers to pay more for transportation, or potentially switch to autos manufactured outside North America.

The White House and its U.S. Trade Representative have repeatedly emphasized the balance of trade between Mexico and the U.S., casting the renegotiation of NAFTA as an exercise in restoring American manufacturing jobs. There is indeed a trade deficit, but trade balances do not necessarily determine employment.

Here are the amounts of the U.S. deficits in goods and service trade in 2016, according to the office of the U.S. Trade Representative (in U.S. dollars):

If the focus is to be on trade deficits, NAFTA is not the place to look.