This article originally appeared in Business in Vancouver on September 15, 2021.


COVID-19 cases rising again. New restrictions. Credit rating downgrades. Is this the beginning of the end of BC’s reign atop provincial economic growth standings? We don’t think so. In fact, we expect Canada’s westernmost province to continue to be a growth leader in the coming years.

BC’s performance before COVID-19 was impressive. During 2015–19, full-time employment rose by more in BC than in any other province, and real growth lagged only PEI. Strong economic gains translated into strong financial results, as BC reported six consecutive surpluses between 2013–14 to 2018–19 and held top-notch AAA credit ratings from the major agencies. COVID-19 brought that run to an end, but 2020’s 3.8% contraction was still the lowest outside the Maritimes (chart), enabled by relative control of COVID-19 and a high share of remote-capable industries.

Early data indicate that BC’s recovery is off to a strong start versus other Canadian jurisdictions. Total employment and home sales growth lead the provinces. BC ranks third in wages and salaries, imports, and population growth, and fourth in exports. In fact, among the major monthly indicators we monitor, BC is the only region to rank no lower than sixth in any category so far this year.

First-half price surges for the province’s range of commodities have no doubt contributed to that start, but we’re also optimistic about the medium-term outlook. Lead, nickel, zinc and copper ore mining was the province’s third-largest merchandise trade sector last year; while prices for copper in particular have cooled amid new fears about the Delta variant, the latest Scotiabank forecast assumes that values of the red metal will reach a record 5 USD/lb by mid-decade as green energy demand ramps up and a dearth of major projects keeps the market tight. We also expect natural gas, gold, silver, and aluminum values to remain well-supported in the next several years, and work on the LNG Canada megaproject continues in Kitimat.

But BC is more than a natural resources producer—it’s also a growing technology sector hub. Though not yet as large an employer as  those south of the border, BC high-tech employment growth outpaced that of major US hubs in California, New York, and Texas in the decade before COVID-19 (chart). The sector—which includes positions in services and advanced manufacturing—is not only relatively lockdown-resilient but also productive, with wages more than 70% higher than the province’s all-industry mean in 2019. And in 2020, BC’s information and communications technology industry output rose by 5.6%—a striking result given the whole-economy decline, and the strongest advance by that sector in any province. 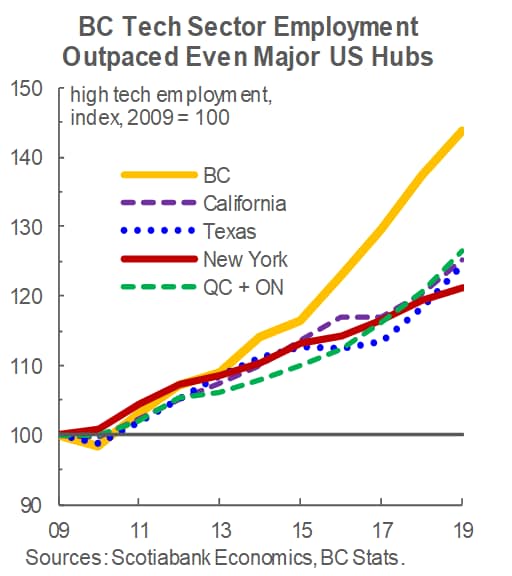 With a relatively strong recovery underway and solid prospects for BC’s major industries, last month’s public accounts—which revised last year’s deficit $2.7 billion lower than forecast—could be a sign of things to come. Budget 2021 linked every 1% in nominal GDP with a fiscal impact of $150–250 million; based on that number, even nominal GDP growth of 10% in 2021—well below the end-August private-sector average forecast—could mean balance improvements approaching $1 billion this year. Characteristically, the plan also included significant prudence, with $2 billion in forecast allowances and general program contingencies this fiscal year.

Upside potential aside, BC maintains a strong fiscal position relative to its provincial peers. Recent rating action highlighted forecasts of a COVID-19-induced surge in borrowing over the next several years, but the province’s net debt burden is expected to exceed only that of Saskatchewan in the next two years. Its forecast interest costs as a share of revenue are the lowest in Canada, and in line with recent history (chart). Finally, recent downgrades notwithstanding, BC still enjoys the strongest credit ratings of any province. 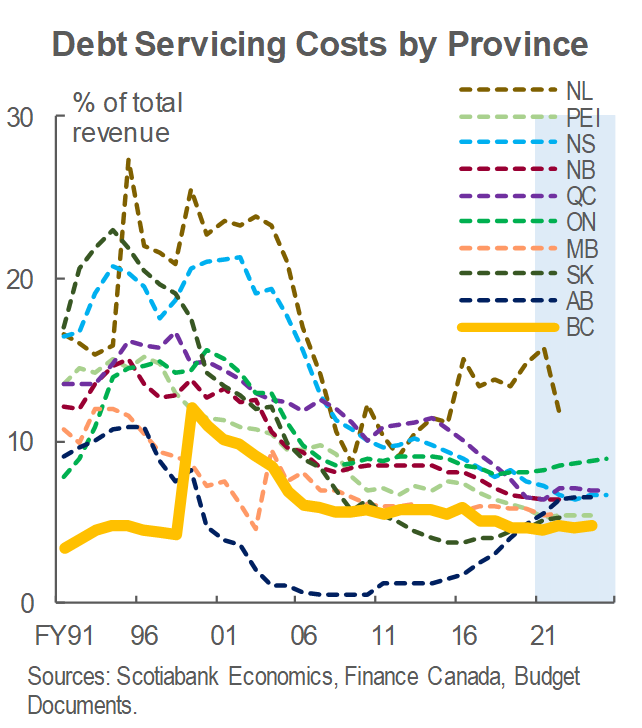 Of course, important questions remain. Immigration boosted BC’s population growth to a two-decade high in 2019 and supported workforce development across sectors but remains well below pre-pandemic levels; safe resumption will be critical to BC’s long-run prosperity. The province has taken positive steps to address housing affordability challenges, but more work is needed from all levels of governments to unlock supply and ensure that BC is an affordable place to call home in the future. Trade with China remains a wildcard—BC sends a higher share of its exports to the Middle Kingdom than any other province—as that country implements environmental regulations, diplomatic tensions persist, and firms reassess their supply chain linkages post-pandemic.

It's been an exceptionally difficult year and a half and new challenges are emerging every day, but BC rounds the corner with many of its pre-pandemic advantages intact. With a diversified economy and relatively strong fiscal position, outperformance can be BC’s story by 2025 just as it was in the five years before COVID-19.

Legal disclaimer
This article is provided for information purposes only. It is not to be relied upon as financial, tax or investment advice or guarantees about the future, nor should it be considered a recommendation to buy or sell. Information contained in this article, including information relating to interest rates, market conditions, tax rules, and other investment factors are subject to change without notice and The Bank of Nova Scotia is not responsible to update this information. References to any third party product or service, opinion or statement, or the use of any trade, firm or corporation name does not constitute endorsement, recommendation, or approval by The Bank of Nova Scotia of any of the products, services or opinions of the third party. All third party sources are believed to be accurate and reliable as of the date of publication and The Bank of Nova Scotia does not guarantee its accuracy or reliability. Readers should consult their own professional advisor for specific financial, investment and/or tax advice tailored to their needs to ensure that individual circumstances are considered properly and action is taken based on the latest available information.