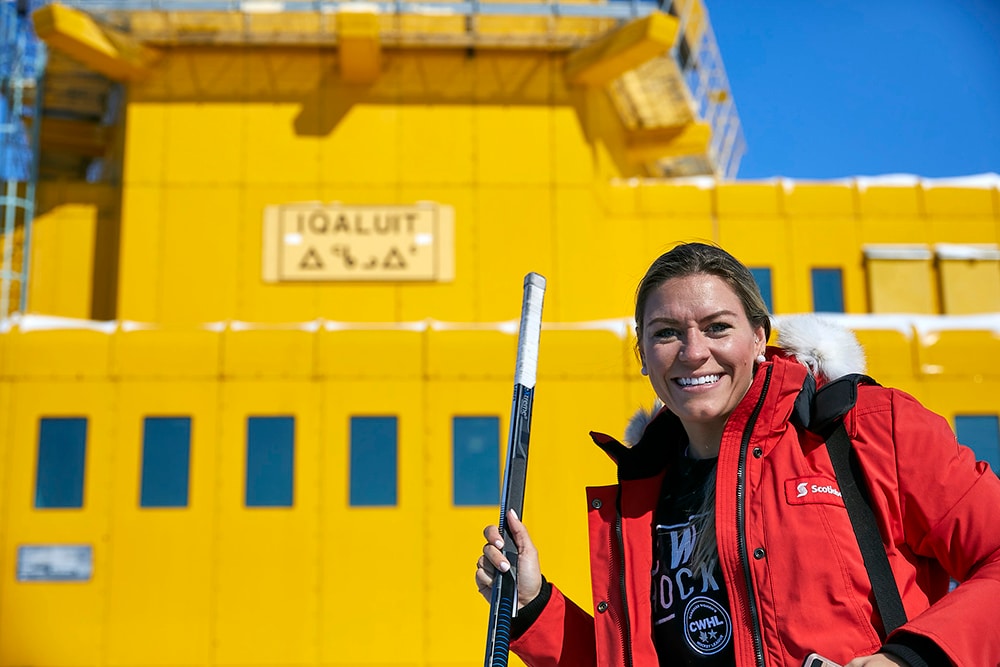 As a young girl growing up playing hockey, Natalie Spooner felt she didn’t have much to aspire to within the sport of hockey. Now an Olympic gold medalist and Canadian Women’s Hockey League All-Star, she’s inspiring the next generation of girls through initiatives like Project North and Scotiabank Girls HockeyFest.

In the hamlet of Gjoa Haven, NU, Olympic gold medalist Natalie Spooner was almost 3000 kilometres north of her Toronto home when she got the chance to meet two young girls who reminded her of when she was a hockey-crazed kid.

“The girls’ teacher spoke up and said they were really into hockey and I got to take some pictures with them and speak to them. I could tell they were super excited that we were there and that we brought hockey equipment,” says Natalie, forward for Canadian Women’s Hockey League (CWHL) team – and 2014 Clarkson Cup champs – the Toronto Furies.

“It made me think of me when I was little – I also loved the game of hockey and it was my passion, so it was cool to be able to relate to them.”

It was one of many special moments for Natalie and her Project North teammates during their tour of six Nunavut communities in April. In addition to distributing 150 bags of new hockey equipment, the Rumie Initiative, a non-profit that makes access to free digital education possible for underserved communities, donated 150 tablets pre-loaded with educational content in honour of Canada’s 150th birthday. Community members also had the chance to see and touch the hallowed symbol of our country’s beloved sport, the Stanley Cup®, and meet Stanley Cup® champion, Lanny McDonald.

During her whirlwind tour of north, Natalie says it quickly became clear that hockey is just as popular in the North as it is in Canada’s more southerly locales.

“To meet the people and the kids up there, they might not have all the resources we have, but they love hockey. They have such a passion for the game,” she says.

As a kid growing up in Scarborough, ON, sports were a central focus in Natalie’s life. She says participating in everything from soccer to hockey to field hockey gave her a lot – physically, mentally and emotionally. Being on teams helped develop perseverance and responsibility, and hockey in particular was a great source of joy.

“I was a little bit shy when I was younger, and sports helped me have the confidence to go out there and play hard, and then feel accomplished after, knowing that I helped my team,” she says. “And I still feel like every time I get on the ice, it’s my happy place.”

Natalie began participating in organized sports at age four, playing on a boys’ team for one year before joining the Durham West Lightning Girls Hockey Association where she played for 12 seasons. Being a girl in hockey could sometimes be challenging, she says, knowing that she couldn’t aspire to reach the same heights as the boys, simply because a career in the NHL wasn’t available to her.

“I was pretty lucky because I played on a girls’ team growing up, so I was surrounded by a lot of other girls who had the same goals,” says Natalie. “But I also had three older brothers and I wanted to be just like them, and I figured out that I couldn’t exactly follow in their footsteps.”

She considers her gold medal win with Team Canada at the 2014 Winter Olympic Games in Sochi, Russia, to be the pinnacle of her career. And it’s gratifying to know that girls can now aspire to play for the CWHL, says Natalie. She’s proud to think that her example is helping fuel the dreams of young women.

Natalie recently took part in Scotiabank Girls HockeyFest, a free event with the Toronto Maple Leafs aimed at creating a positive hockey experience for girls in the Toronto area. Young hockey fans had the opportunity to meet Natalie, learn some new, on-ice techniques and take home a keepsake hockey jersey.

“Just to see all the girls come out to learn some skills – they are super-pumped to be there and they all want to learn,” says Natalie. “It’s inspiring for me too, to know that I am making a difference to them. They are the future of women’s hockey.”

Even with all the strides women in hockey have made in recent years, it still can be a difficult choice for women to pursue their passion rather than go with a more lucrative profession, says Natalie.

“One of the toughest decisions for me when I came out of university was, ‘Do I continue with hockey or do I go to med school?’ I wasn’t even sure if I was going to make the Olympic team or not,” she says. “But I think it’s getting better, and it’s only going to keep improving if girls keep playing sports and we keep pushing for what we deserve.”

Natalie says she and her colleagues in the CWHL hope the sport will grow to the point that women can make a living playing hockey full-time, and that’s part of the reason they are more than willing to take part in charitable and promotional activities that will help grow the game.

“We love hockey and we’re passionate about it,” she says. “We know there’s a long way to go still to get to the level we want the game to be at, but hopefully by the time those little girls grow up, they can make a living by playing hockey. As long as we’re doing our part, it’s going to get there eventually.”

NHL and the NHL Shield and the word mark and image of the Stanley Cup are registered trademarks of the National Hockey League. © NHL 2017. All Rights Reserved.