Anne Orr had the privilege to sit down with six awesome interns working at the Bank this summer. They’ve dubbed themselves the “InnoSquad” - they are full of energy and have a huge passion for the industry that they work in – technology!

Anne: I love the fact that I can get you all together for a quick interview! I’ve only interviewed a maximum of two people together, so this is exciting. Why don’t we start by telling me a bit about yourself and how you found out about the role!

Rishabh: Awesome! *looks around to see if it’s ok that he starts*! Well, I guess I’m starting then! I’m a Masters of Computer Science student and I’m specializing in Big Data at SFU. I heard about this opportunity at the Bank from Arina when I met her at an event. Previously I worked at a technology company but I was interested in applying my knowledge from that organization to a Bank. I was intrigued by how the Bank uses technology and I was able to find out more about the tech space when I met Arina!

Kevin: I was interested in emerging technology and I knew that Scotiabank is the leading bank in the technology space and through talking to some people, I was put in touch with Arina.

Sincere: So as you know, I’m from Vancouver and I really wanted to be in Toronto this summer for a different experience. I was connected through my friends *Arina interrupts and lets Sincere know that is a FALSE story*!

Arina: Actually Sincere, we met your friend at NW Hacks in BC and we asked if she had any other awesome friends that could be interested in technology at Scotia!

Sincere: …yes… you’re right *laughs the best laugh!* That is how I was put in touch with Arina...and Toronto has been an awesome place to be this summer!

Deborah: To be totally honest, I actually didn’t know much about the Bank but I was exposed to the technology area of the Bank through a career builder program at school (Ryerson). I did some mock interviews with Jess and that’s where she found out that I love going to hackathons, and told me about this amazing opportunity!

Mitchell: I found out about the role again through meeting Arina and Jess. It’s been awesome to experience what technology is like at the Bank and the people I’ve met since being at the Bank have given me the best experience and challenges as an intern.

Spencer: So I’m from Queen’s and was at Q Hacks (a hackathon on campus) which is where I met Arina. There were so many info booths that I wasn’t sure which one to go to and then I saw the Jenga tower at the Scotiabank booth and the rest is history!

Anne: What did you think the work term was going to be vs. what it is now in reality?

Rishabh: I’ve always been interested in the Capital Markets space and following the markets. I’ve worked in this space in the past, and it was cool to follow the markets. In this internship, I love the fact that we work together as a group of six and the team structure is very flat with no hierarchy. That was a huge selling point for me that I wanted to try!

Sincere: Actually for me what I expected and what happened in reality were fairly similar. I was expecting to have a lot of autonomy and work together as a group of students to figure things out.

Kevin: To be honest, it isn’t what I expected at all! I thought it would be simple assignments, however, the assignment that we’re working on is a problem that the Bank has been trying to solve for years! It worked out for the better.

Spencer: It’s pretty much a four-month hackathon for us! We were bleeding Scotia red when we got here and still are!

Deborah: I knew it was going to be a team environment working on a project but I couldn’t visualize how it would be. We’re able to work closely with the team and I’m very actively involved by meeting with stakeholders. We’re constantly in scrum meetings as an agile team which is awesome. I think it’s fair to say that we’re all actively involved on the project and it's fun working together in same room as it’s SO much easier to communicate with each other!

Arina: Do you all feel like you have a say in what you’re doing?

Mitchell: I didn’t expect the freedom of choice we have in terms of the technology we are using. We just ask and we are provided with the technology! This has been awesome in terms of having the ability to explore the new technology. We have total autonomy over what we’re doing which is great! 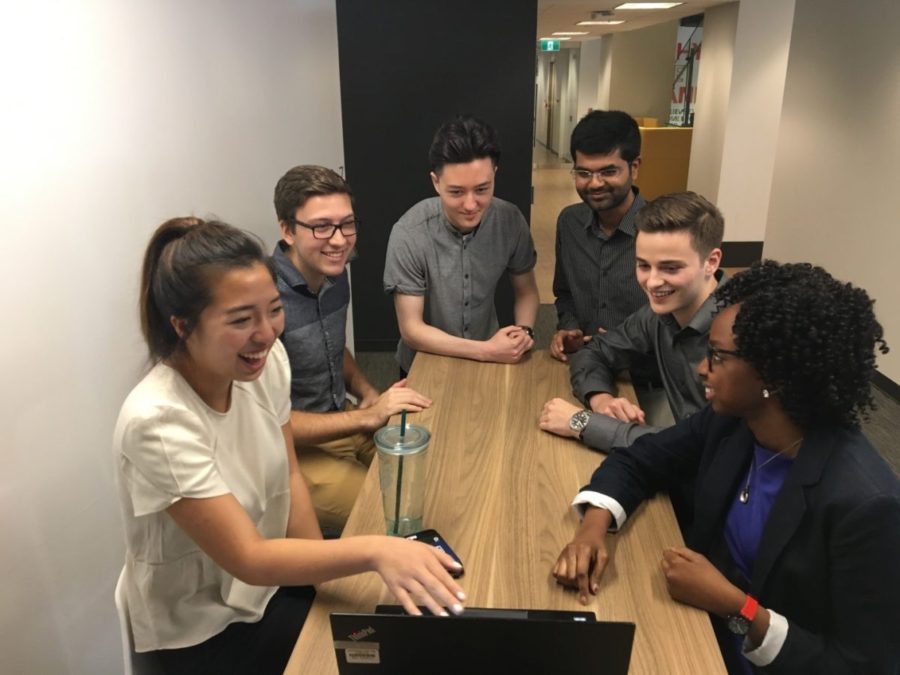 Arina: Was it hard at the beginning to feel comfortable in what you wanted to say?

Mitchell: The first month was tough but then we started to do research and find out where to start.

Sincere: Yeah, we figured out what technology to use and then learned about what work was better suited for the six of us as individuals. We naturally formed groups and we’re working in pairs which has worked out so well.

Anne: So who are the pairs?

Deborah: So it’s Rishabh and Mitchell, me and Spencer and Sincere and Kevin. We all balance each other out really well!

Sincere: *laughing* We actually have a nickname for these two *points at Mitchell and Rishabh*…

Mitchell: Oh gosh… why are you bringing this up??!

*Everyone is laughing by this point*

Anne: What does DB stand for?

Anne: Haha how did you come up with the name?

Mitchell: I think it started through Lync actually and then we started to draw things on Lync…

Spencer: We have a drawing of them both with sunglasses and snapbacks…it’s a piece of art!!!

Sincere: Honestly we have the best time as a group! We love Scott and Ryan (InnoSquad’s managers & mentors). We have been given such autonomy over the work that we do and sometimes we are even the SMEs on the project we’re working on which is a cool feeling.

Anne: In just six words (one for each of you guys on the InnoSquad), how would you sum up your experience here?

Mitchell: Insightful - we honestly have a way better idea of how things operate and we’ve been able to meet different leaders of the department, which has helped us to understand how everything interacts with one another.

Anne: Okay that was way more than one word but I guess it’s acceptable for such a great answer! And Deborah?

Anne: What was the highlight of your work term at the Bank (for each student)?

(*Inno squad chats amongst themselves* and come up with a collective highlight): We got everything to work by working together!

Rishabh: Meeting so many directors we had a lot of awesome exposure and we were encouraged by our leaders. They also boosted our confidence in our first few weeks at the Bank.

Spencer: People thought that the ideas we came up with looked cool and we received some great feedback.

Deborah: I really liked the daily scrum meetings that Michelle held with us. She’s such an approachable leader and loves her students which is so evident. It’s been a great way to have informal mentorship all summer!

Mitchell: Going into a full agile scrum experience has been so cool. You don’t learn it in school and it’s such a fast passed environment!

Kevin: The socials after work were cool to be able to network with our peers.

Sincere: I agree! A highlight for me was definitely meeting the other interns through the Student Committee.

Anne: Who is the coolest person you have met during your time at the Bank?

All: Arina because she got us the job!

Some general shout outs from the Inno Squad and in their words:

- Stella – She is a senior leader at the Bank and is really accomplished. She has an awesome energy and takes the time to learn from her interns what they’re working on and where their interests lie. She is smart, down to earth, and an all-around great person to work with!

- Michelle – She is awesome and not from a tech background (rather a teaching background) which is cool for the team to learn from. She has a great way to manage the team and is super talented to do it. She manages to keep the ball rolling and directs problems where they need to go. She asks the right questions to guide them when it’s needed.

-  Scott, Ryan, Yolonde – They are all passionate individuals with the work that they do and they’re constantly seeing the best in people. Scott – as a manager, laid back, autonomy, free spirited, and they all understand the importance of being able to explore and experience new things while students are on their work terms.

Anne: Love it!!!! What’s a word of advice you guys have for students looking to experience technology at a Bank like Scotiabank?

Spencer: There is so much technology in the Bank. You need to interact with people properly to be able to grow. It’s a large organization with so much opportunity!

Kevin: The corporate culture is slower that I thought in terms of gathering some approval for certain aspects of our projects but it’s still awesome! People sometimes think a Bank and its tech are stuck in the '50s, but that’s definitely not the case here!

Rishabh: We have the resources of a big company and the autonomy/feel of a start-up! Don’t be afraid to take risks and explore…you are at the beginning of your career as a student and you have the ability to take some risks!

Spencer: Don’t be intimated to work at Scotia without any financial knowledge…it’s okay to ask questions!

Deborah: Keep an open mind, admit what you don’t know and ask for help if you have any questions!

Sincere: Be fearless in failing fast and failing early – in a technology role, especially, you have to try new things out and ditch something if it’s not working properly!

Mitchell: We are a big bank and I realized after reading about it/speaking to more people that there are so many teams within it! It’s awesome to know that there’s the ability to work within technology across business lines. Take advantage of the networking platforms while you’re here and don’t be afraid to communicate outside of your immediate social circle.

Interested in the technology space at Scotiabank? Visit scotiabank.com/campus for more information.